Miscellaneous
by Jay Cochran
July 22, 2008
Hasbro, Inc. (NYSE: HAS) returns to San Diego Comic-Con in 2008 with its iconic properties that have entertained fans of all ages for decades. Hasbro’s expansive portfolio of brands that have become part of the fabric of the global pop-culture such as G.I. JOE, TRANSFORMERS, MY LITTLE PONY and its licensed toy lines based on characters from the MARVEL and STAR WARS universes, will be on display in the Hasbro booth (#3213) for four days of pure “fan-dimonium.”

Following are the highlights of Hasbro’s Comic-Con showcase:

G.I. JOE, the original action figure, has delivered classic adventure and memorable characters to generations of kids and collectors for nearly 45 years. With the introduction of the G.I. JOE VS. COBRA saga more than 25 years ago, millions of fans met characters such as DUKE, SNAKE EYES, STORM SHADOW and COBRA COMMANDER through toys, comics and animation. Next summer, the compelling G.I. JOE VS. COBRA storyline comes to life on the big screen with the debut of a live action movie from Paramount Pictures and Hasbro on August 7, 2009.

It’s been an exciting year in the Marvel Universe with Marvel Studio’s blockbuster movies, Iron Man and The Incredible Hulk, as well as The Spectacular Spider-Man Animated Series which is currently airing. As the master toy licensee for Marvel’s incredible library of Super Hero properties, Hasbro is thrilled to display its highly anticipated toys and action figures for 2008 from its MARVEL LEGENDS, SUPER HERO SQUAD, IRON MAN, THE INCREDIBLE HULK, SPIDER-MAN and MARVEL TRANSFORMERS CROSSOVERS lines. With so many great expressions, fans will be able to ogle the very best in Super Heroes at the Hasbro booth as well as some exciting upcoming additions to the line.

The belle of the Comic-Con ball, Hasbro’s iconic MY LITTLE PONY brand recognizes a remarkable milestone in 2008 with the celebration of its 25th birthday. A special display featuring one-of-a-kind ponies designed by pop-culture influentials for the “My Little Pony Project: 25 Ponies for 25 Years” will be on hand to help celebrate a quarter century of unique MY LITTLE PONY whimsy. Comic-Con will be the first time fans will see an 18” MY LITTLE PONY figure designed by renowned comic-artist and illustrator, Junko Mizuno. Fans should be sure to stop by Hasbro for a glimpse at some of these unique 18” MY LITTLE PONY figures before they go up for auction in the fall benefiting Give Kids The World, a nonprofit organization that works to fulfill the wishes of children with life-threatening illnesses. Fans can visit www.themylittleponyproject.com for more details about this year long celebration.

STAR WARS fans of all ages will be able to get a first look at Hasbro’s largest-ever MILLENNIUM FALCON, when it unveils the new model as well as toys from its STAR WARS: THE CLONE WARS line as they make their debut in stores nationwide on Saturday, July 26. The MILLENNIUM FALCON has become one of the most recognizable “characters” in movie history and is one of Hasbro’s most popular STAR WARS toys. The all-new MILLENNIUM FALCON includes electronic lights and sounds, and is approximately 30% percent larger than the original version of the toy, first launched in 1978. STAR WARS: THE CLONE WARS blasts off first as a worldwide theatrical release on August 15, 2008, then continues as a weekly series on Cartoon Network beginning in the fall.

Hasbro’s TRANSFORMERS franchise has become a worldwide phenomenon following last year’s highly successful movie from DreamWorks Pictures and Paramount Pictures. The brand is bigger than ever before and ready to invade San Diego Comic-Con with its epic battle of AUTOBOTS VS. DECEPTICONS. This year’s new Transformers: Animated television series, which airs on Cartoon Network, has provided great entertainment and an exciting line-up of action figures for kids and kids at heart. On display in the Hasbro booth will be never-before-seen additions to the TRANSFORMERS line including a sneak peak at how the brand intends to celebrate 25 years of “More Than Meets the Eye” in 2009.

Of course, what would San Diego Comic-Con be without several Hasbro exclusives? Available at the HasbroToyShop booth (#3329) will be the following:

This 3 3/4” figure is inspired by the classic comic issue #38 in which a black suited COBRA COMMANDER rants to a crowd of COBRA followers. The rise of COBRA began with one man’s dazzling lies which mesmerized the entire town of Springfield, the birthplace of the evil COBRA organization. Figure comes with a podium and COBRA banner, and is sold in a protective case.

A variant of the 3 ľ” Black Suited COBRA COMMANDER, this version features COBRA COMMANDER is his blue “Springfield Country Club” blazer. The rise of COBRA began with one man’s dazzling lies which mesmerized the entire town of Springfield, the birthplace of the evil COBRA organization. Figure comes with a podium and COBRA banner, and is sold in a protective case.

The Hasbro Design Team has assembled an 80-page bound inaugural sketchbook, featuring art from the designer’s personal sketchbooks and straight from the drawing boards. This sketchbook will only be available at Comic-Con 2008. Supplies are limited.

You don’t need to risk getting crushed by a gigantic boulder to get your own fertility idol. This fun, hip version of Indiana Jones’ Fertility Idol has large character head and chunky body and comes in exclusive foil packaging. “Made from 100% Recycled AWESOME! ™” This HasbroToyShop.com exclusive launches at San Diego Comic-Con 2008!

This exclusive set recreates the iconic scene from Star Wars: Episode V The Empire Strikes Back and even has complete phrases from the scene. Darth Vader and holographic Emperor Palpatine figures come posed on an electronic base; press the base to hear the entire scene of dialogue from the film Star Wars: The Empire Strikes Back that begins with “What is thy bidding, my Master?” This HasbroToyShop.com exclusive case-pack launches at San Diego Comic-Con 2008!

Welcome to the trendy side of The Force! Clone Commander Gree led the Elite Corps stationed on Kashyyyk during THE CLONE WARS. Now this camo-covered soldier wields his blaster weapon as he flaunts his large character head and chunky body, comes in exclusive foil packaging! “Made from 100% Recycled AWESOME! ™” This HasbroToyShop.com exclusive launches at San Diego Comic-Con 2008!

Your favorite high-tech super hero comes in exclusive foil packaging. Whether for play or display, this fun, hip version of Iron Man has large character head and chunky body, and is sure to bring a smile to the faces of collectors and fans alike. “Made from 100% Recycled AWESOME! ™”

The return of the Marvel Legends Box Set, featuring exclusive artwork by Frank Cho, inside and out! This box set includes three individual 6” figures: Ka-Zar, Shanna and Zabu.

This lowly warrior was reconstructed to be the very image of OPTIMUS PRIME. This NEMESIS PRIME figure has the shape of the mighty AUTOBOT leader, but his gray and black deco plus (insert others blaster/projectile/etc) make this figure unique. Awesome TRANSFORMERS Voyager class figure changes from robot-mode to vehicle-mode and back again.

This authority-indifferent seeker is now part of the Transformers Titanium Series. Standing a huge 6” tall, this incredible figure includes display stand and case. Awesome detailed die-cast metal TRANSFORMERS figure changes from robot-mode to vehicle-mode and back again.
Image 1 of 21 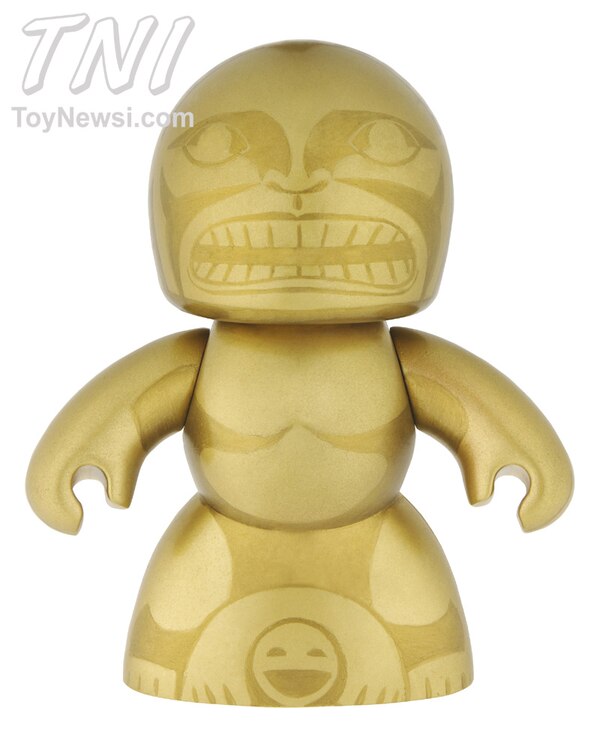 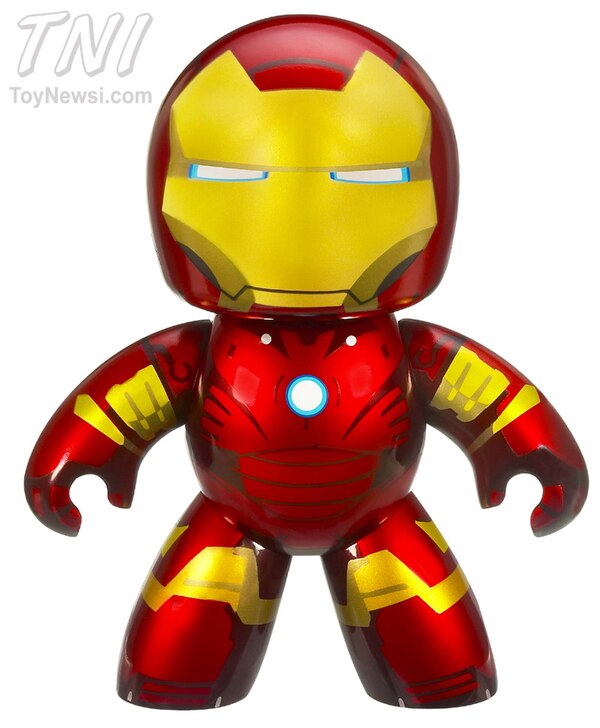 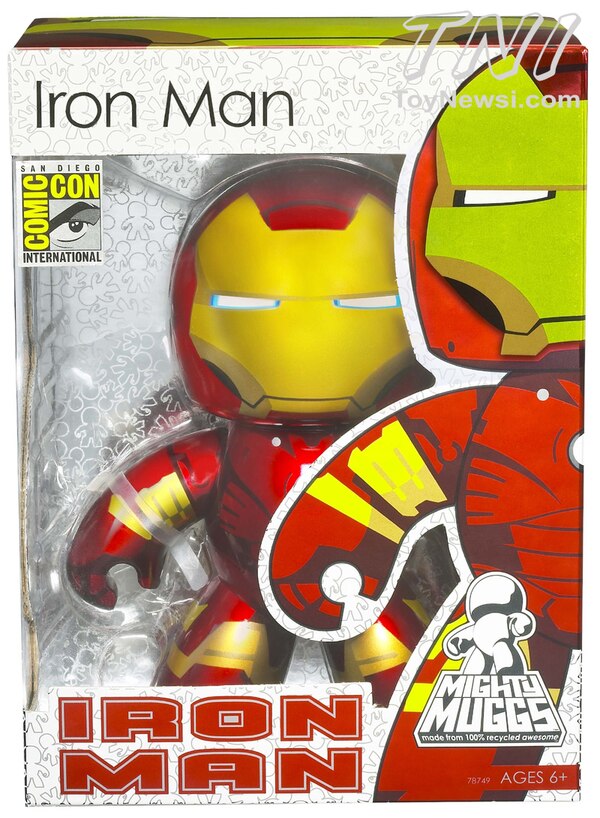 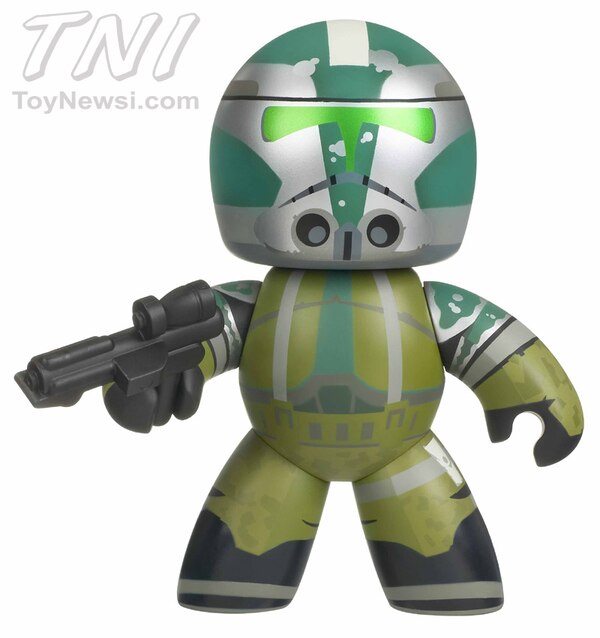 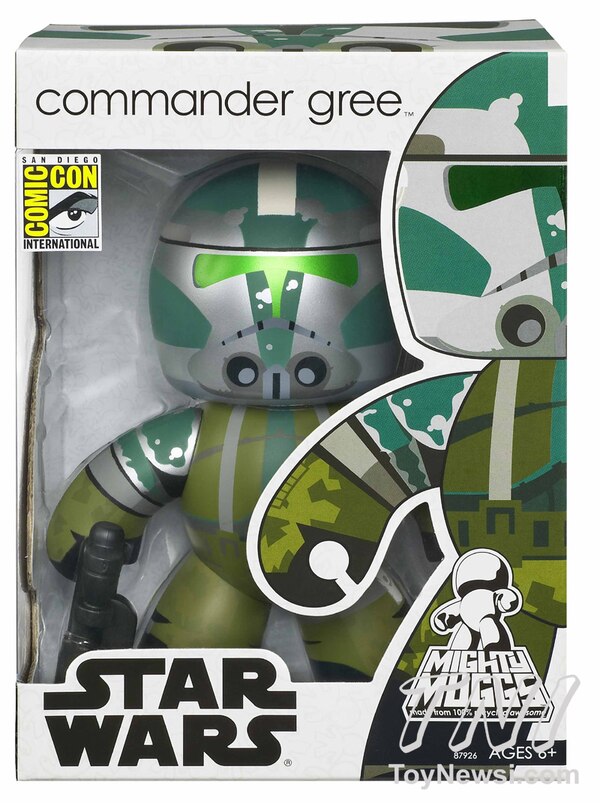 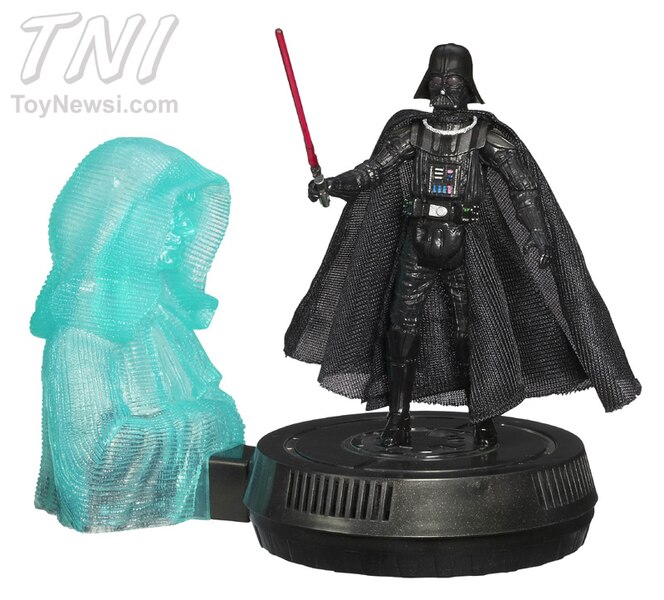 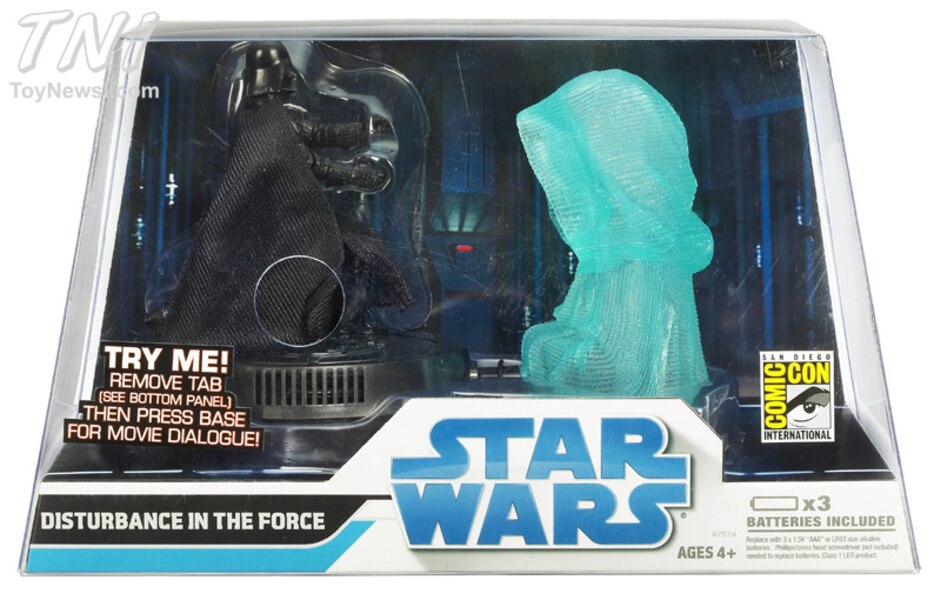 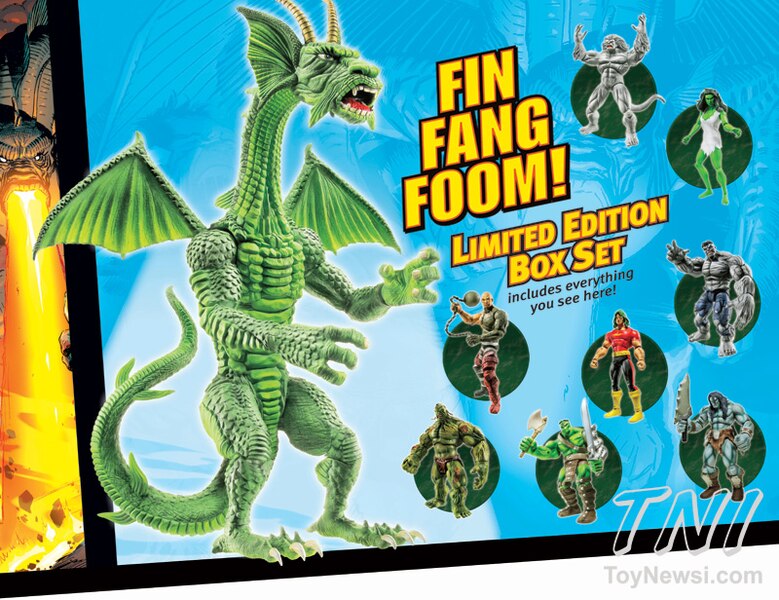 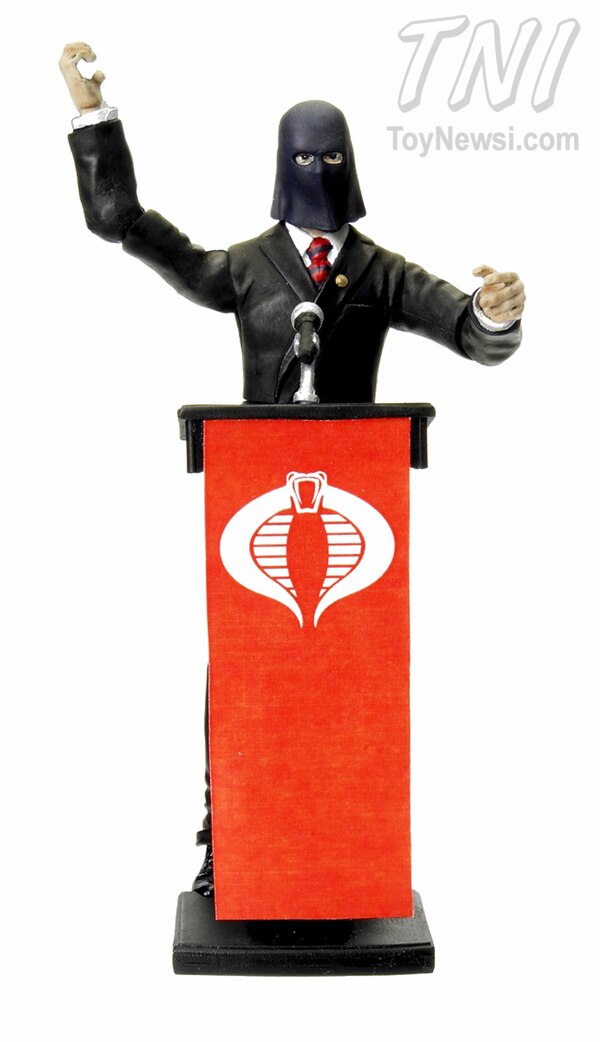 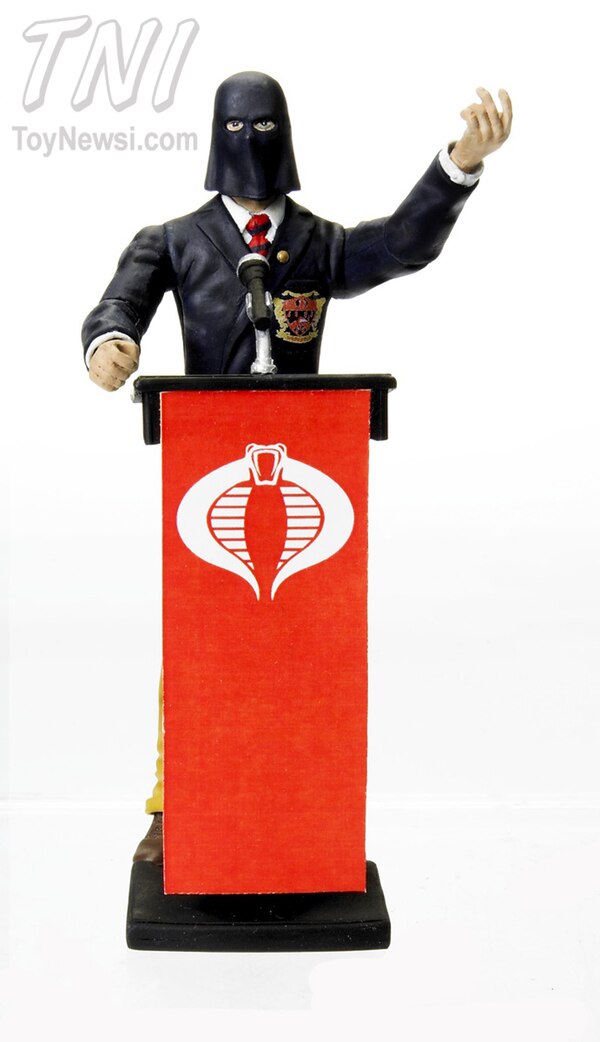 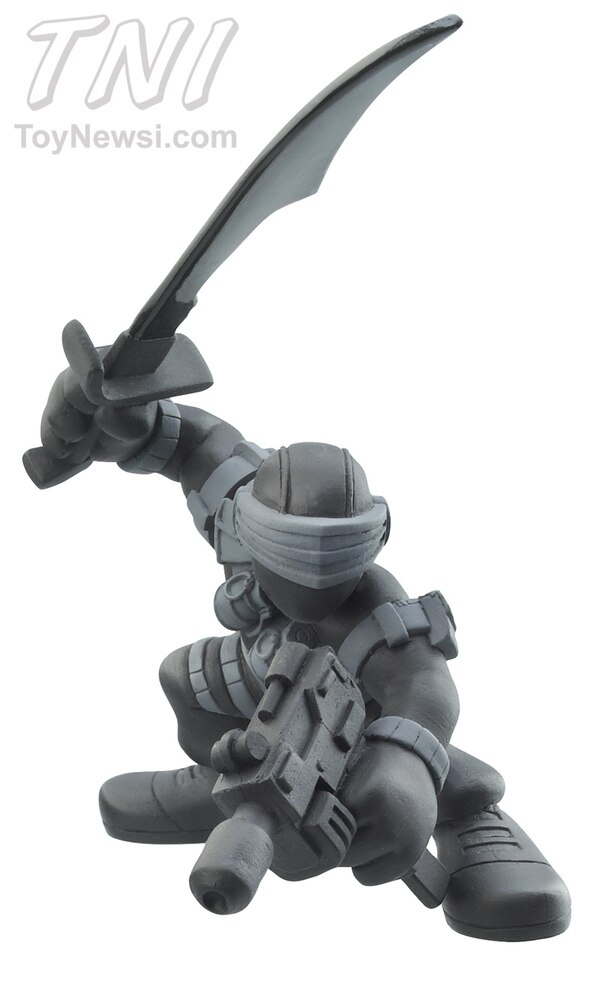 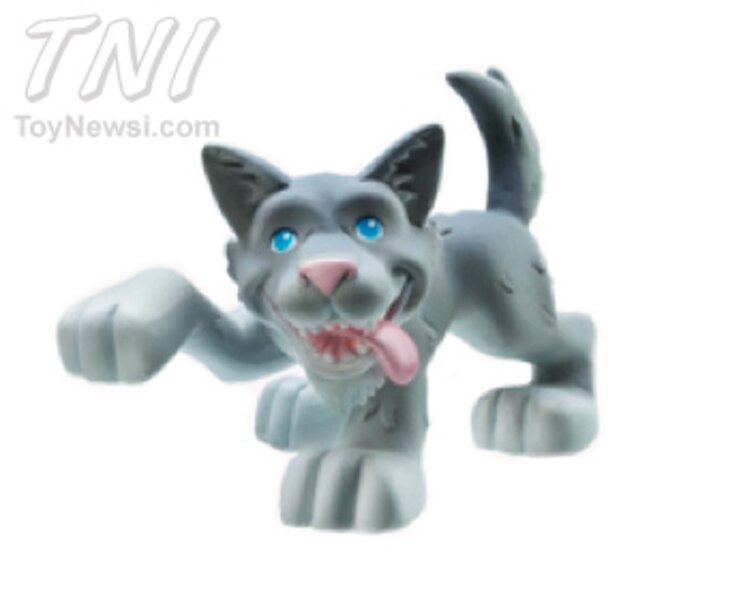 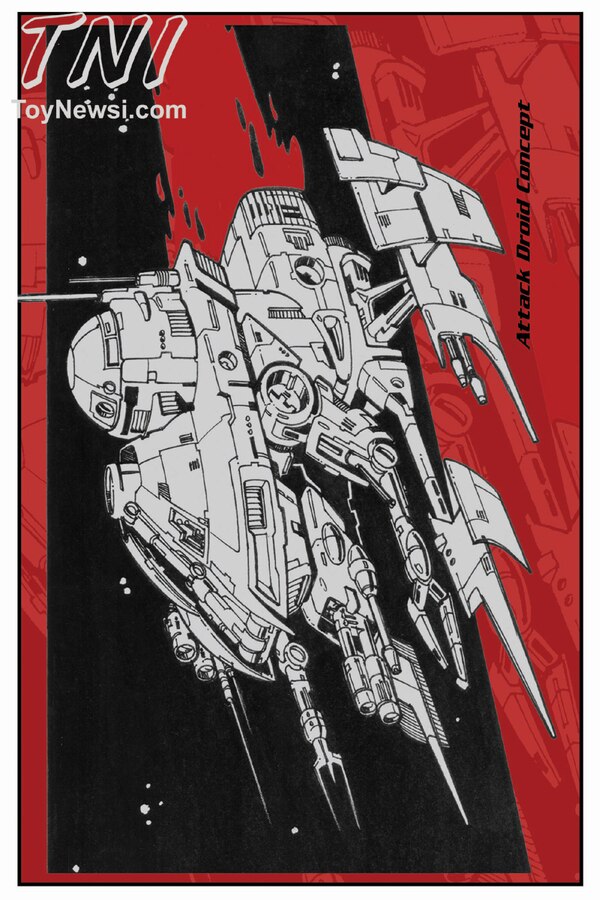 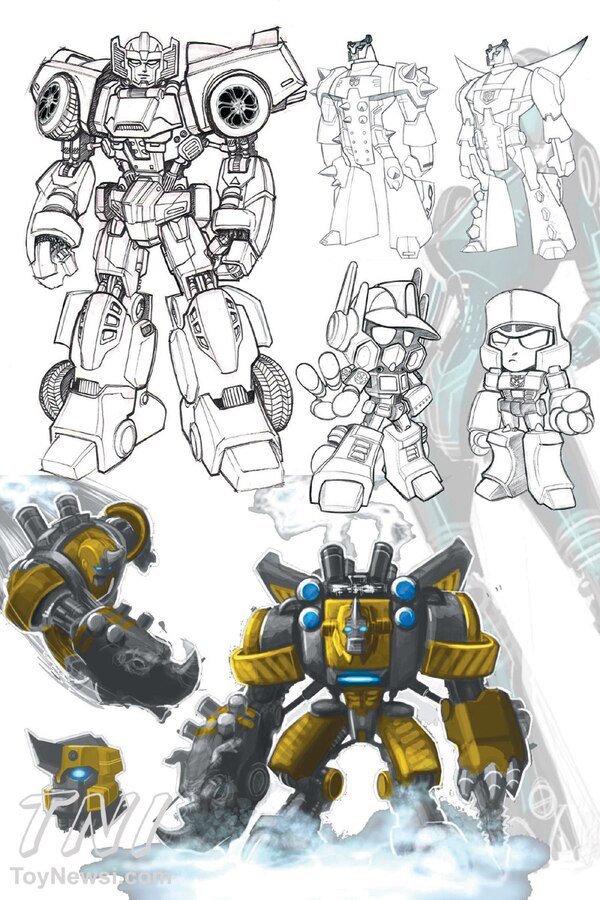 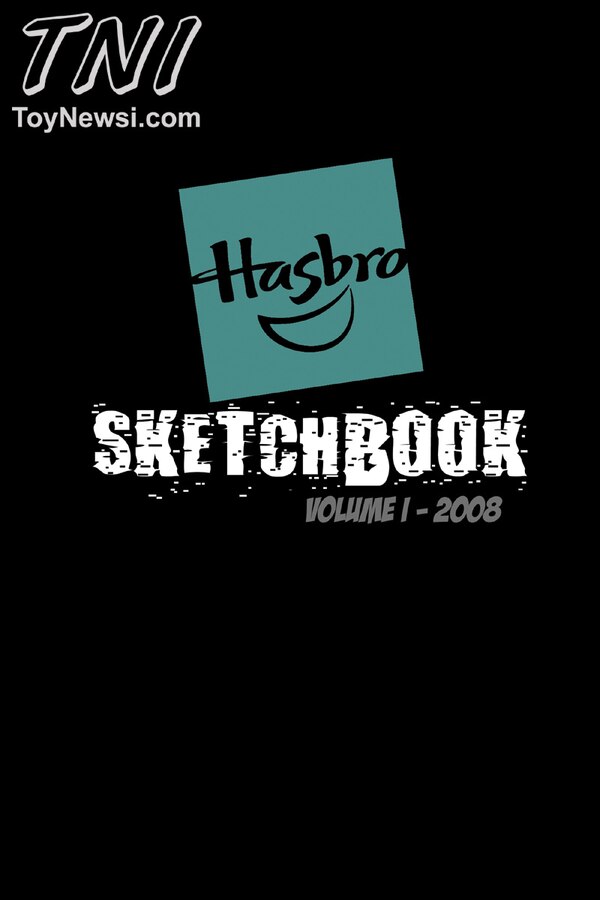 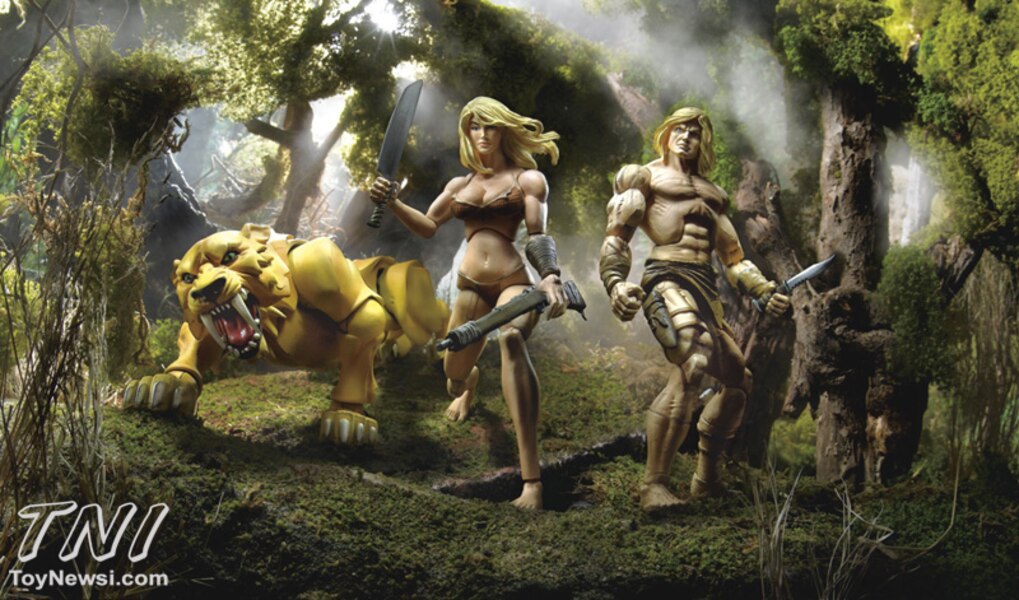 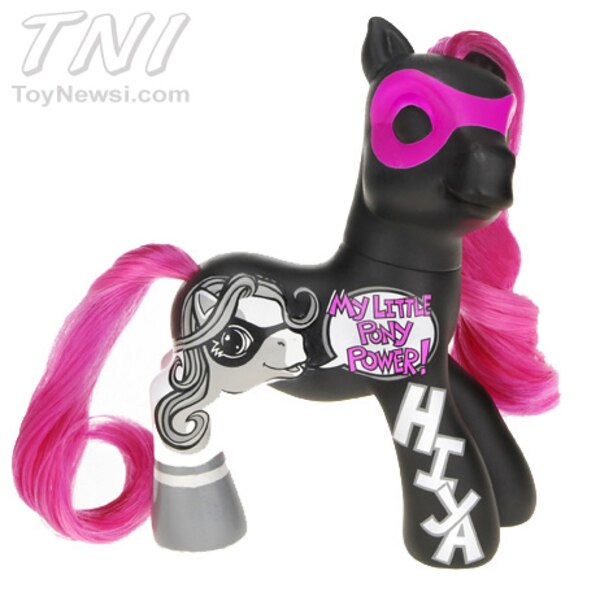 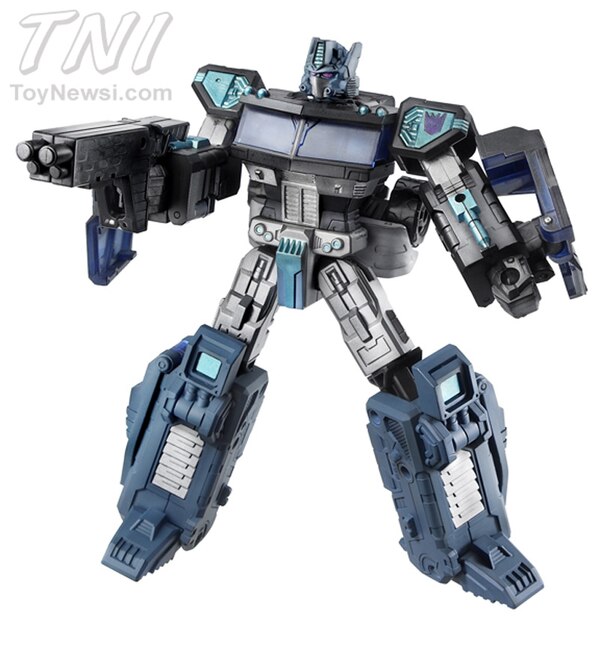 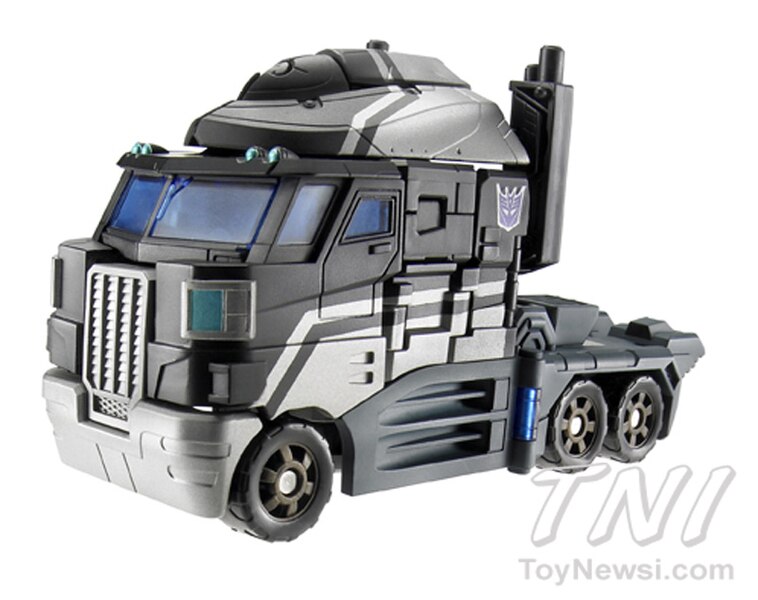 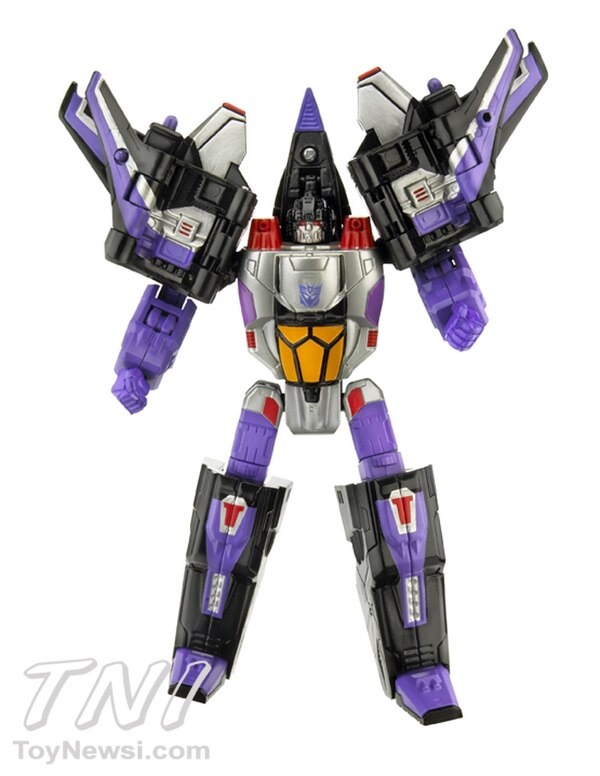 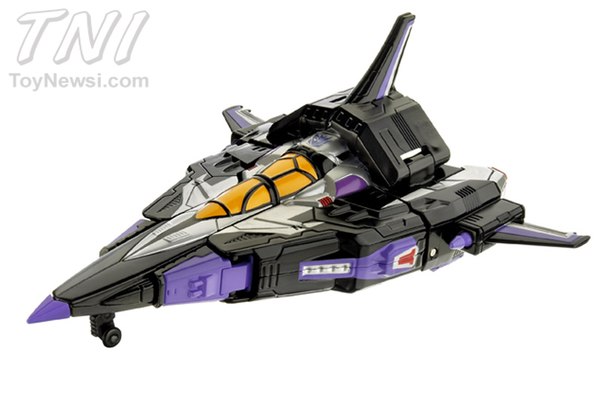