Sponsor News: A Bounty Worth Hunting! New Star Wars: The Book of Boba Fett Pins Available Only on Toynk.com

On the sands of Tatooine, bounty hunter Boba Fett™ and mercenary Fennec Shand navigate the galaxy's underworld to fight for Jabba the Hutt's old territory. Having survived through The Clone Wars, being swallowed by a Sarlacc, and countless other deadly run-ins, Boba Fett™ has earned himself a reputation as one of the most feared outlaws in the galaxy.

Commemorate the legendary bounty hunter's return with this Limited Edition Star Wars: The Book Of Boba Fett™ Premiere Pin. The icon is depicted here taking the throne of Jabba's Palace, where his galactic adventures are set to continue on the hit Disney+ series.

The impressive design features the legendary bounty hunter Boba Fett™ seated in the usurped throne after taking Jabba’s Palace, as seen in the end credits of Star Wars: The Mandalorian. Complete with the iconic Mythosaur sigils in the background. The phrase “Legendary Bounty Hunter” is inscribed below the iconic scene.

This collectible Star Wars pin features a base metal design with highly detailed soft enamel inlay. Perfect for display or trade, this enamel pin comes with a secure backing for accessorizing and display. It comes on a branded hanger card packaging and retails for $13.99. This is the ninth release in the Premiere Pin series. It is a limited edition of just 2,000 pieces.

Celebrate the epic return of the fan-favorite bounty hunter with this collectible enamel pin featuring Boba Fett's™ iconic Mandalorian helmet! A must-have for any Star Wars fan. This officially licensed collectible is FREE with any $50 purchase on Toynk.com, while supplies last.

The exquisite Boba Fett helmet enamel pin screams excellent workmanship with its polished, smooth surface - just like it was forged by a true Mandalorian Armorer. Hang it on your backpack, wall, or car to show your love to this fandom. Comes on an officially licensed The Book of Boba Fett™ backer card. This exclusive collector's pin is a limited edition of 2,000 pieces and has a retail value of $13.99. 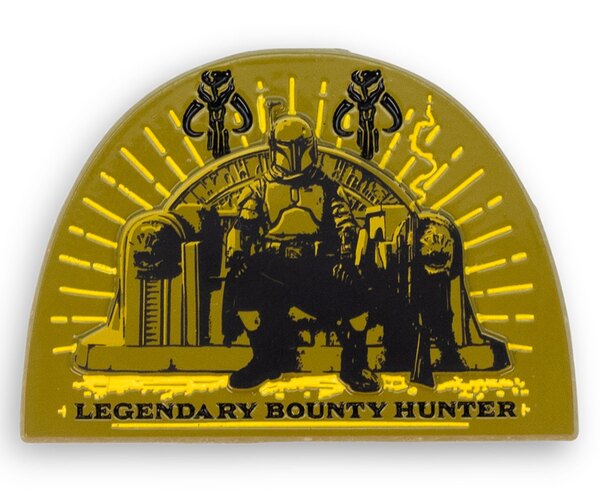