DC Comics
by Jay Cochran
October 27, 2006
Certain to be the high-flying collectible of the 2006 holiday season, new TONNER CHARACTER FIGURESÖ (TCFÖ) will hit retail shelves this holiday season with the DC STARS Collection based on classic DC Comics Super Heroes. Licensed by Warner Bros. Consumer Products on behalf of DC Comics, WONDER WOMAN and SUPERGIRL will debut this Fall and SUPERMAN and BATMAN will follow in 2007.

The time may be right for Tonner to introduce his hybrid product. According to leading consumer and retail information provider The NPD Group, retail sales in the U.S. toy industry generated just over $21.8 billion in 2005, with dolls, action figures and accessories exceeding $4 billion in sales; 2005 sales were up from 2004 sales by 1%. "Super Heroes have traditionally been a top selling product category," noted Tom Tumbusch, publisher of Tomart's Action Figure Digest. "Tonner's Wonder Woman and Super Girl articulated character figures are two of the most faithful representations of these characters ever produced and will have appeal to our readers and collectors."

The TONNER CHARACTER FIGURESÖ are app. 16" tall with multiple articulated joints for expressive movement and mobility. In keeping with the fine detail and high-end quality of Tonner's other popular product lines, TONNER CHARACTER FIGURESÖ will feature hand-detailed face painting, rooted hair; and authentic costuming inspired by the character's life from origin and secret identity to Super Hero.

The initial line will feature WONDER WOMAN and SUPERGIRL, both inspired by art concepts from the 'Silver Age' of DC Comics' comic books. WONDER WOMAN will include costumes from her Amazon origins, DIANA PRINCE secret identity clothing and unique touches such as golden bracelets instead of the traditional blue iron/silver bracelets most commonly seen on this character.

SUPERGIRL is inspired by the original KARA ZOR-EL, cousin of SUPERMAN. SUPERGIRL will include clothing from her KRYPTONIAN origins and her LINDA LEE secret identity.

Tonner debuted the DC STARS collection on its website (https://www.tonnercollectibles.com) on September 27, 2006. TCF's based on the DC STARS Collection will be sold at gift and toy specialty retailers nationwide, including FAO Schwarz, beginning December 2006; the suggested retail price range is $124.99 for dressed TCFs. Separately available clothing will be available as well as character variations in strictly limited edition releases. Tonner will expand the collection in 2007 to include SUPERMAN, LOIS LANE, BATMAN, BATGIRL, and other related DC Comics heroes and villains.

Additionally, in a positive show of support, Action Figure Digest has put TCF's DC STARS on the cover of issue #148 of their publication. Said Chris Hall, editor, "It was an easy choice for Tomart's Action Figure Digest to use DC STARS for the cover. The figures naturally grab your attention. Tonner has proven they know how to give collector's a quality figure in a reasonable price range."

Headquartered in Hurley, New York, the Tonner Doll Company, Inc. develops and markets high quality collectible dolls like Betsy McCall«, Mary Engelbreit«, Effanbee« Dolls, and the popular Tyler Wentworth« line of dolls and fashions, as well as other licensed characters, including THE WIZARD OF OZ dolls and HARRY POTTERÖ TCFs.

DC STARS, BATMAN, SUPERMAN, WONDER WOMAN and all related characters and elements are trademarks of and ® DC Comics.
(s06)

TONNER CHARACTER FIGURESÖ is a trademark of the Tonner Doll Company, Inc.
Image 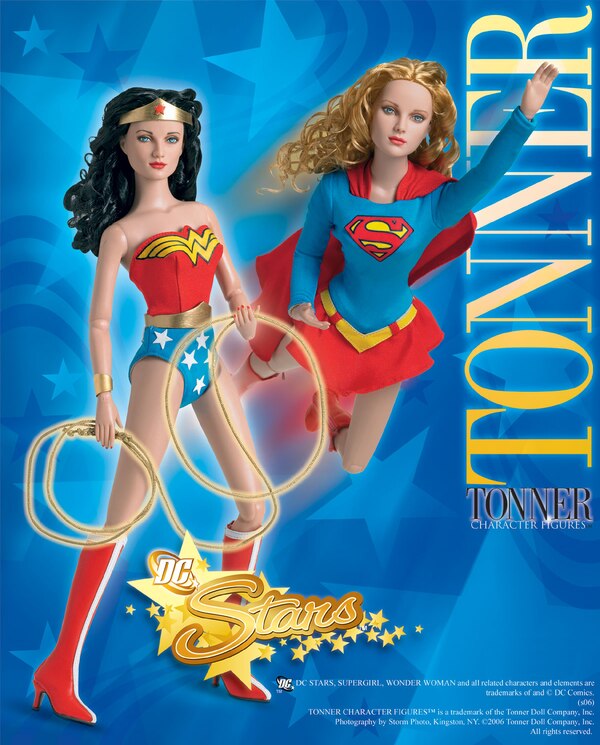