Prepare for a battle of the ages when the Justice League takes on its archenemies, the Legion of Doom, as Warner Bros. Home Entertainment, Warner Bros Animation, and DC Entertainment unleash JLA Adventures: Trapped in Time. Packed with non-stop action, JLA Adventures: Trapped in Time comes to DVD on May 20, 2014. The all-new original movie is a thrilling film for the whole family and features some of the Justice League’s most notable members. Fans won’t want to miss this action-packed hit!

After crafting a monumentally over-the-top plan to take over the world by expanding the polar ice caps, mastermind Lex Luthor is missing and widely presumed dead. One thousand years later, Luthor is discovered and memorialized in the Legion of Super Heroes’ museum, where the teenage super hero, Karate Kid, accidentally releases him. The museum contains both the knowledge of Superman’s secret identity and a way to time travel, in the form of the mysterious Time Trapper. Once Lex Luthor is free, he quickly sets out on a mission to permanently erase Superman from the time stream.

For the Justice League – Superman, Batman, Wonder Woman, The Flash, Cyborg and Aquaman – along with Robin and teen super heroes Karate Kid and Dawnstar, the stakes have never been higher. Facing the deadliest rescue mission to date, the future lies in the hands of the Justice League as it struggles to confront its most critical challenge: the threat of having never existed!

“Fans of the Justice League have been very passionate about wanting to see more stories involving their favorite characters,” said Sam Register, President, Warner Bros. Animation and Warner Digital Series. “Our hope with JLA Adventures: Trapped in Time is to reward that passion with the same high levels of action and storytelling that fans have come to expect in a Justice League animated film.”

“We are thrilled to introduce this exciting new Justice League film with the release of JLA Adventures: Trapped in Time,” said Mary Ellen Thomas, WBHE Vice President, Family & Animation Marketing and Partner Brands. “The Justice League brand is already a favorite and will continue to engage fans with its group of vibrant super heroes.” 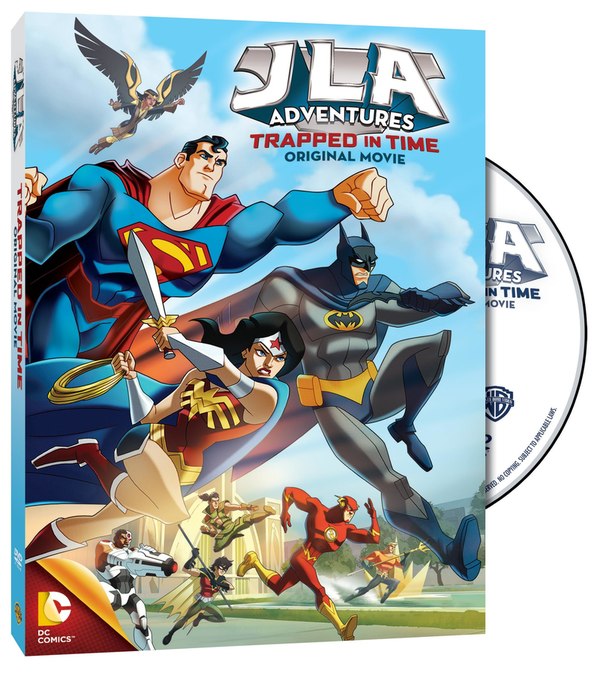