DC Comics
by Jay Cochran
January 23, 2015
DC Collectibles has released a new Q&A where they address the quality control issues some of you have been experiencing with breakage of their figures, including those in the first wave of their Batman: The Animated Series line. They give an explanation about the clear plastic joints they use on their figures and an update about what they are doing to correct the problem. Here is what they said:

We received fan questions asking about quality issues with DC Collectibles product, so we wanted to take a moment to give you a look at where we are and what we are doing going forward.

Some fans have mentioned damaged product or brittle parts with our Batman Animated action figure line. We are currently evaluating the production process for these action figures and have instituted some additional reviews in order to improve and catch any quality issues. Be reassured that quality will be improving going forward.

For those of you more interested in specifics, here are some details. We have traditionally used a polycarbonate for smaller joints on our plastic action figures. This is sometimes referred to as the “clear plastic.” Based on our early reviews of samples sent from the factories the products held up under testing. Since then, however, in part as a result of fan feedback that we received, it has become clear that we can make the smaller joints in our action figures even stronger.

Starting with most products in 2015, we are upgrading to POM (aka polyoxymethylene) for those joints previously made in polycarbonate. This is a stronger plastic that allows it to be molded in a color instead of clear. We have heard from our fans loud and clear that this is the number one issue for our action figures.

We will continue to use PVC (aka polyvinyl chloride) for the larger size joints (such as elbows and knees), ABS (acrylonitrile butadiene styrene) for harder plastics and on a case by case basis, we will be thickening the size of very small joints. This may affect some of the aesthetic look of the small Batman Animated characters but we feel the balance between look and quality will be appropriate.

In addition to the material change, we have changed our quality review process and extended our production timeline to ensure we can deliver the best products.

Wow! That was a lot of long sounding words! But hopefully this background information helps reinforce to you, our fans, that we are dedicated to improving our product so that you have the best experience possible. And we want to make sure we’re always improving. You can help us by sending your feedback to our e-mail address: DCCOLLECTIBLES@dcentertainment.com

They go on to say because of the changes being made with their quality control, wave 2 of the Batman: The Animated figures will be delayed.

We also have updates on the announced series of action figures. Because of the new changes to our quality control, we have delayed Wave 2 of the Batman Animated figures. The new plan is to have the Joker, Man-Bat and Robin release in March of 2015. Poison Ivy will be released later in 2015 as we want to be sure that her smaller joints are working perfectly. Wave 3A will now feature Killer Croc and the Creeper and will release in May 2015 while Wave 3B will feature Poison Ivy, Robin (from The New Batman Adventures) and Harley Quinn and release in June 2015.

We understand delaying the product causes frustration, but want to make sure you’re getting the best quality and are able to enjoy the figures to the fullest!

The Q&A also teases that they will have some big announcements planed for Toy Fair next month and it briefly talks about the challenges they face when sculpting figures based on real life actors such as those for their Arrow line.

The DC Collectibles team is honored to have some of the best sculptors in the business. Some still sculpt “traditionally” using clay or wax while others sculpt digitally using a computer. If an actor has been scanned by a computer it gives us a great start to matching their likeness. Once the scan is complete, we embark on some additional sculpting that we call “cleaning up.” An output of a digital sculpt is a close approximation of a person, but the technology still isn’t detailed enough to be released without some additional work. This is because we also have to take into account the mass production process which can cause the product to shrink and distort the likeness. We estimate the rate of shrinkage and add to the digital sculpt to counter the issue.

If there is no digital scan of the actor, it is up to the talented hands of the sculptor to use as much reference of the person as necessary to capture their looks and their essence. While they may have to start from scratch, it allows the artist to truly build the sculpture from the ground up, trying to capture the subtle quirks of a personality.

Surprisingly, most people are usually their worst judge as to how they truly look. This may sound odd, but when you think about it, it’s not. How often do you look at yourself? Unless you spend all day seated in front of a mirror, you don’t see yourself as often as everyone else does. Often, a person’s limited view of him or herself doesn’t always match the reality.

Finally they talk briefly about the big Convergence event coming to the DC Comic titles this year and they reveal that they won't be doing any specific product lines for it, however they do feel the ramifications from such a big story with so many character will likely influence their stuff, at least a little. Oh and they also released an image for their upcoming DC Icons Firestorm statue which is slated to be released in Fall 2015. Check that out below.
Image 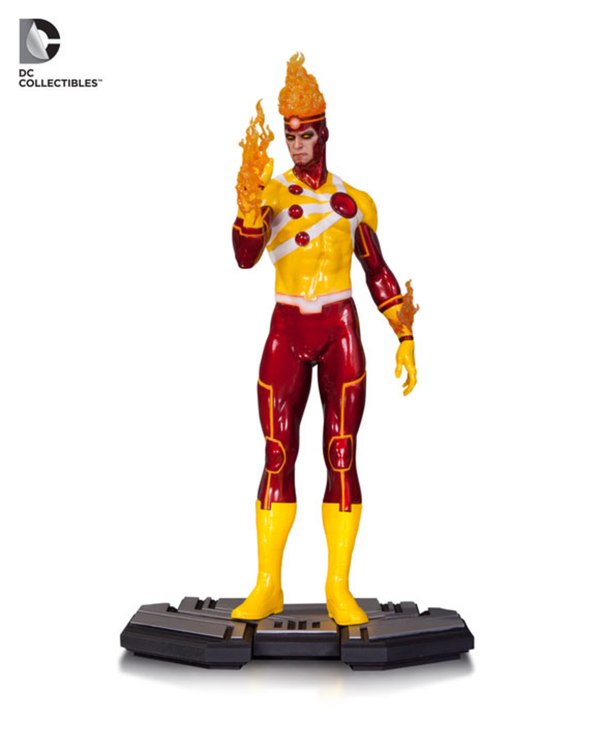