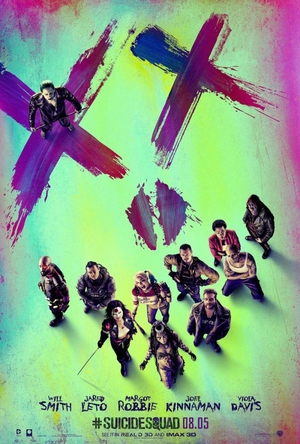 The third installment in DC Comics Cinematic Universe hits movie theaters this week with Director David Ayer's Suicide Squad. The movie focuses on a group of super villains brought together against their will by the US Government in the wake of Superman's death to perform black-ops missions suited specifically to their unique skills and powers.

The movie starts with Amanda Waller (Viola Davis) pitching her idea of a team of criminals to the military brass by introducing us to each of the main players featured in the movie including marksman Deadshot (Will Smith), Joker's girlfriend Harley Quinn (Margot Robbie), fire wielder Diablo (Jay Hernandez), strongman Killer Croc (Adewale Akinnuoye-Agbaje), Captain Boomerang (Jai Courtnery), the mystic witch Enchantress (Cara Delevingne) and team leader Rick Flag (Joel Kinnaman). It's this portion of the movie that I felt was the weakest because it felt rushed and doesn't do a good job of really getting you invested in the characters. Scenes later on in the movie do a better job of that, but they don't come until over halfway through the story.

Waller eventually gets the green light for moving forward with her team and soon they are called into action.

Both Will Smith and Margot Robbie do great jobs with their characters. Robbie really does bring the Harley Quinn character to life from the pages of the comics, and Smith, well he's Will Smith and that works for Deadshot.

Jared Leto's Joker, who does play a significant role in the movie, brings us a portrayal of the Clown Prince of Crime that is very different from what we have seen on the screen before. I won't say it's bad, but I did feel it was maybe a bit too serious.

This movie isn't your typical superhero movie because it's not about superheroes. It's not even about super villains searching for redemption by becoming superheroes. This is a movie about bad people forced to do the Government's bidding or be killed, and while that may not be a formula that will leave you feeling all warm and fuzzy inside I think it does make the movie stand out a bit over the other superhero films out there.

Overall, I felt this was an enjoyable movie filled with lots of action and some comedic moments that will make you laugh. It's by no means a movie without flaws, but I felt it was much better than Dawn Of Justice and a step in the right direction for the DC Comic Cinematic Universe.

There is one after-credit scene that is definitely worth sticking around for.