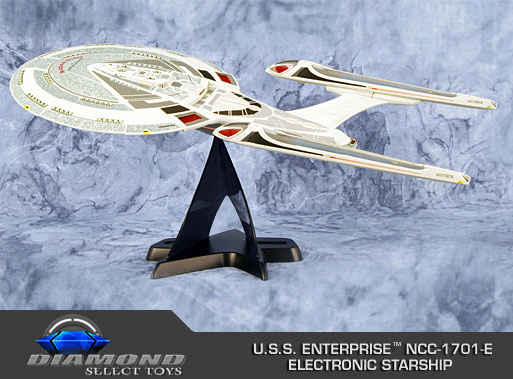 With next month’s release of the Enterprise-E locked in, we’re excited to bring you this latest round of images! In what can only be called a labor of love, the Enterprise-E is ready to debut in comic shops in January of 2006 and in other stores worldwide around the same time. Marking the first original ship released under Diamond Select Toys’ Star Trek license, the Enterprise-E includes a Starfleet display base, incredible attention to detail and light and sound effects featuring the voice of Patrick Stewart as Captain Jean-Luc Picard!

Originally announced by Art Asylum, the Enterprise-E made the transition to Diamond Select Toys along with the Star Trek license earlier this year as part of our new Starship Legends line. While the second ship in this line is a closely guarded secret, fans can expect more news as its Fall 2006 release date approaches.