McFarlane
by Outsiders
September 13, 2011
UPDATE: Check out some preview images in our GALLERY below giving you a first look at some of the figures listed below.

Our best-selling line of Halo: Reach action figures returns for a sixth series in early 2012. Get ready, because we're bringing more Noble Team Spartans, more fearsome Elites, more massive Brutes, and a special emphasis on what keeps the fans coming back to Halo: Reach -- multiplayer action! With single figures, two-packs, three-packs, and accessory packs, this series has something for everyone.

Jun (unhelmeted)
The Noble Team Spartans of Halo: Reach, unlike Master Chief, are seen both with their helmets and without. This new, alternate version of Noble Three brings back Jun with his unhelmeted appearance. Figure includes his signature Sniper Rifle and a Frag Grenade.

Kat (unhelmeted)
The Noble Team Spartans of Halo: Reach, unlike Master Chief, are seen both with their helmets and without. This new, alternate version of Noble Two brings back Kat with her unhelmeted appearance. Figure includes her signature Magnum and a Frag Grenade.

Brute Major
The fearsome Jiralhanae, better known as Brutes, dominate the battlefield with their raw strength and savagery. Only those warriors who have proven themselves in battle may earn the right to wear the distinctive gold armor of the Major class. Figure comes with Spike Rifle and Plasma Grenade.

Elite Zealot
The Covenant dispatch Elite advance teams to hunt down artifacts of value to their religion. Such teams are small, nimble, and almost always Zealot-class. Our latest Elite figure features the unique armor and maroon color of the Sangheili Zealot. Figure comes with Concussion Rifle and Plasma Grenade.

Sabre Pilot
When the planet Reach was threatened by a Covenant supercarrier, Noble Team initiated the daring Operation: UPPER CUT to take it down. Noble Six and Jorge took the lead, but they couldn't have succeeded without the assistance of the brave Sabre pilots of Echo Team. Our Sabre Pilot figure features the simple blue flightsuit and enclosed helmet of the UNSC Air Force -- essential for the cramped cockpit conditions and proximity to the vacuum of space. Figure comes with DMR.

Spartan HazOp (male) (rust/rust)
Some operations are considered hazardous even for a fully armored Spartan. These ops call for the specialized HazOp armor set. This Spartan features the Hazardous Operations helmet and shoulders, orange "rust" paint, and includes a Focus Rifle and a Plasma Grenade. Exclusive to Toys "R" Us.

Spartan Recon (male) (team red/team red)
Developed in ONI's Beta-5 Division Ordnance Testing Facility, the Recon armor was intended to offer stealth capabilities with little or no loss of endurance. This figure comes with matching Recon helmet, shoulders, and chestplate; is painted in bright "team one" red; and includes the intimidating Rocket Launcher weapon and a Frag Grenade. Exclusive to Target.

Spartan JFO (male) (white/white)
The Joint Fires Observer helmet is reserved for Spartans of Lieutenant Colonel rank and above. Figure comes with matching JFO helmet and shoulders, white armor, a Plasma Grenade, and an all-new weapon: the devastating Target Locator. Exclusive to GameStop.

Team Objectives
Our first-ever Halo Accessory Pack brings the action of Halo: Reach multiplayer to your figure collection! Stage an epic match of Capture the Flag between your Red Team Spartans and Blue Team Spartans with detailed replicas of the highly coveted team flags -- or pit your players against one another in a heated round of Assault with the Capture Plate and Assault Bombs. Want to throw an Elite or two into the mix? We've even included the Covenant version of the Assault Bomb, first introduced in the new map, Breakpoint. The Team Objectives Set includes a team red Spartan Mark V with Assault Rifle, a Red Flag with detachable base, Blue Flag with detachable base, UNSC Assault Bomb, Covenant Assault Bomb, and a Capture Plate.

Headhunter
Halo: Reach introduced several new gametypes to Halo multiplayer, including the fast-paced, chaotic mode known as Headhunter. In this free-for-all frenzy, players fight to collect flaming skulls and return them to the moving scoring zone. Whoever has collected the most at the end of the round wins! Our Headhunter 2-pack includes two Spartans and five flaming skulls for them to fight over. Player one is a male Spartan EVA custom with green and yellow armor, equipped with a DMR. Player two is a male Spartan Commando custom with violet and yellow armor, equipped with a Sniper Rifle. The five skulls included in this set all feature a unique sculpt, with flames rising from a different area of each elusive prize.

Invasion
The multiplayer action continues with an expanded pack of figures based on the high-stakes, Spartan vs. Elite mode known as Invasion. On the Boneyard map, the Sangheili invaders team up to infiltrate a UNSC shipbreaking yard and steal a Data Core full of military secrets. The humans get their chance to infiltrate the enemy on the Spire map, which features a team of Spartans infiltrating a heavily guarded Covenant tower. Our Invasion 3-pack includes a red team Spartan Grenadier custom with Grenade Launcher, a blue team Elite General with Plasma Repeater, and both a UNSC Data Core and Covenant Data Core for each soldier to defend or capture.

Long Night of Solace
The unforgettable Halo: Reach campaign mission "Long Night of Solace" told the tale of Noble Team's courageous operation to infiltrate and destroy an orbiting Covenant supercarrier. For the first time in the Halo game series, Spartans took the fight into space, utilizing Noble Six's training as a pilot of the experimental Sabre spacecraft. Joining Six in the cockpit was his Spartan-II teammate, Jorge. Together, they faced waves of Covenant defenders, in both artificial gravity and low-gravity environments, to plant a bomb aboard their target and hopefully escape to fight the next battle. Our Long Night of Solace 3-pack commemorates this daring raid with a trio of figures from Operation: UPPERCUT. Set includes the unhelmeted version of Jorge with his Machine Gun Turret, the rare gold-armored version of the Elite Ranger, and Noble Six with Magnum and the all-new M-Spec Re-Entry Pack.

Generator Defense
The unpredictable Firefight mode introduced in Halo 3: ODST returned in Halo: Reach with even more new and exciting gametypes. One such variant was Generator Defense, which features Spartans tasked with the protection of various electric generators threatened by the Covenant's unexpected attack. Our Generator Defense set brings this critical military asset to your figure collection. Keep it safe! Generator features a lockdown shield that can be raised and lowered and a radar dish that spins and pivots. Set also includes a male Spartan JFO custom in sage and steel armor, equipped with a Shotgun to repel any Elites that get too close.
Image 1 of 3 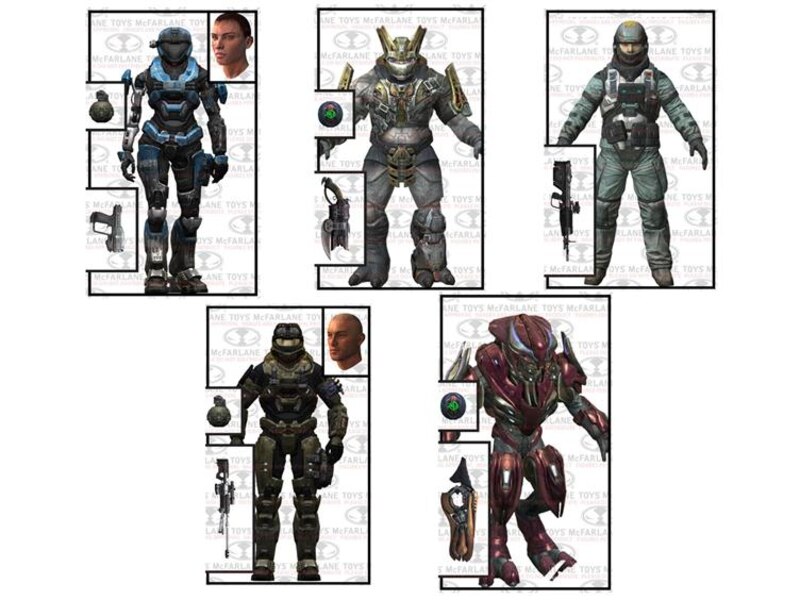 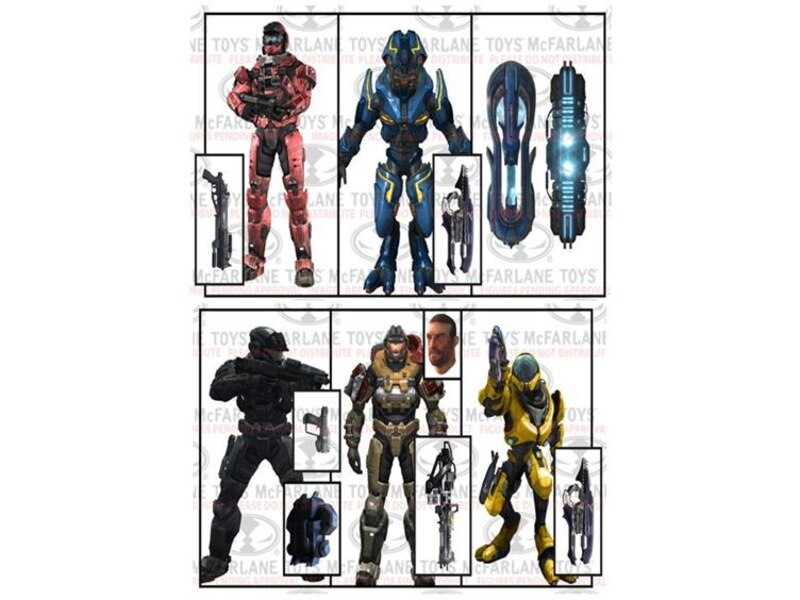 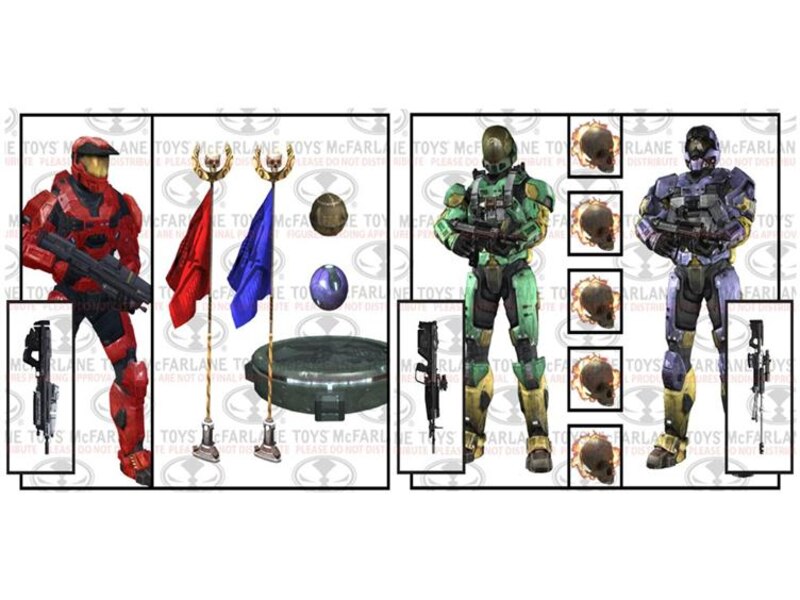