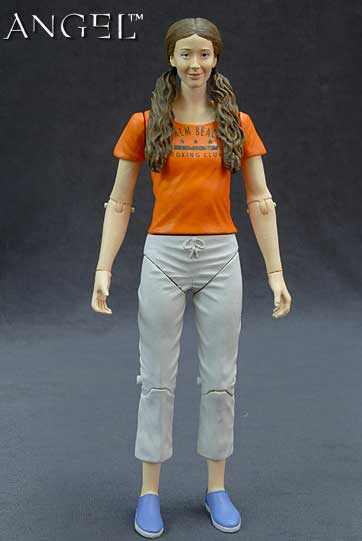 Direct from the Whedon-verse, Diamond Select Toys is proud to introduce the core assortment of our upcoming Angel action figure release. The assortment will feature Season 5 Angel, Season 3 Fred and "Shells" Illyria, which will have limited availability! Standing 6" tall and based on digital scans, this latest release will feature 14-16 points of articulation; include several episode-specific accessories, and detailed bases!

Season 5 Angel shows our leading vampire with a soul as he appeared during his tenure at Wolfram & Hart. Season 3 Fred shows off Fred’s quirky personality… and her pigtails! The limited "Shells" Illyria brings our favorite blue-haired god to life as she first appeared in this world. This core assortment will be solicited in the June issue of Previews magazine and will be available wherever Buffy and Angel action figures are sold.

Details concerning the exclusive versions of both characters will be announced in the near future along with more information detailing each figure’s accessories and base. It’s safe to say there are a few surprises in store, so check back often!