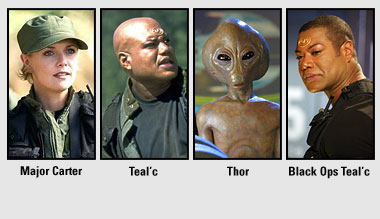 Samantha Carter joined the Stargate program immediately following its reactivation under General Hammond and was a core member of the newly formed SG-1 unit. Carter, a brilliant Air Force pilot and astrophysicist from a career military family, became the most renowned expert on the physics of the Stargate and wormhole technology.

After rescuing Colonel O’Neill from certain death at the hands of Apophis’ Serpent Guards, Teal’c quickly became a trusted member of the SG-1 team. The Jaffa Warriors acted as soldiers, servants, and living incubators for their Goa’uld masters. With an honorable heart, Teal’c uses his battle tested skills to help the Tau’ri of Earth defeat the Goa’uld menace and bring peace to the subjugated Jaffa throughout the universe.

Thor is the Supreme Commander of the Asgard fleet and legendary protector of peaceful races throughout the universe. Seeing the great potential within the human race he becomes a valuable ally to the SG-1 team and the Earth itself.

You can expect the same articulation featured in the upcoming Jack O’Neill, Daniel Jackson and Serpent Guard figures, with incredible attention to detail thanks to Jean St Jean’s sculpting. The core assortment is scheduled to contain Major Carter, Teal’c, Thor and the limited Black Ops Teal’c featuring one of his more recent looks! Images and details will be announced along with the full lineup of exclusive figures as the Fall 2006 release date approaches!