LEGO
by Jay Cochran
February 15, 2019
Universal Brand Development and the LEGO Group are excited to announce an all-new animated mini-series – LEGO Jurassic World: Legend of Isla Nublar – following the adventures of Claire, Owen and fan-favorite dinosaurs seen in the 2018 animated special, LEGO Jurassic World: The Secret Exhibit. The 13-epsiode mini-series will debut later this year. Additionally, we’re revealing four LEGO building sets based on the new mini-series – complete with three never before seen dinosaurs - that will hit the shelves this fall: Dilophosaurus on the Loose (Shown Below), Baryonyx Face-Off: The Treasure Hunt, Triceratops Rampage and T. rex vs Dino-Mech Battle.

Thrilling adventures await children when they construct Owen Grady’s drone and fly to save Hudson Harper from an escaped dinosaur in LEGO® Jurassic World 75934 Dilophosaurus on the Loose. The drone features 4 spinning rotors and a net shooter function to aim at the Dilophosaurus dinosaur model. This building toy for kids also includes 3 minifigures, plus a market stall in the shape of a dinosaur’s head with lots of accessory elements to inspire creative play.

75935 Baryonyx Face-Off: The Treasure Hunt
Rush to stop Danny Nedermeyer and Sinjin Prescott’s dangerous treasure hunt in LEGO Jurassic World! According to legend, there is treasure hidden on Isla Nublar and Danny and Sinjin have a map and old video tape to help them find it. But when a Baryonyx dinosaur thinks they are trying to steal her fish, they have to hide out in an old trailer. Help Owen Grady and Claire Dearing fix up the offroad buggy. Then drive with them and Red the dog to catch the bad guys before they steal the treasure!
Ages 7+, 434 pieces, $59.99 (USD)

75937 - Triceratops Rampage
Take a ride on the awesome new LEGO Jurassic World Egg Spinner with Simon Masrani and Allison Miles! Then check the sign for directions to Jurassic World’s gyrosphere. But, watch out—-there’s been a power failure and the mighty Triceratops has smashed through the fence and escaped! Jump in the buggy with Owen Grady and speed to the rescue. Dangle a carrot in front of the mighty dinosaur to distract it and save the tourist. There’s never a dull day in Jurassic World park!
Ages 7+, 447 pieces, $59.99 (USD)

75938 - T. rex vs Dino-Mech Battle
Danger! Danny Nedermeyer is roaming Jurassic World park in his huge Dino-Mech on a mission to steal the treasure hidden in the Isla Nublar volcano. But first he has to face the mighty T. rex. Jump in the boat with Owen Grady, Claire Dearing, Vic Hoskins—plus baby Velociraptors Blue, Delta, Echo and Charlie—and speed to the battle scene. Fire the boat’s stud shooters at the Dino-Mech. Put the T. rex to sleep with the tranquilizer gun. You must stop Danny before he finds a way to smash into the volcanic rock and steal the treasure!
Ages 8+, 716 pieces, $89.99 (USD) 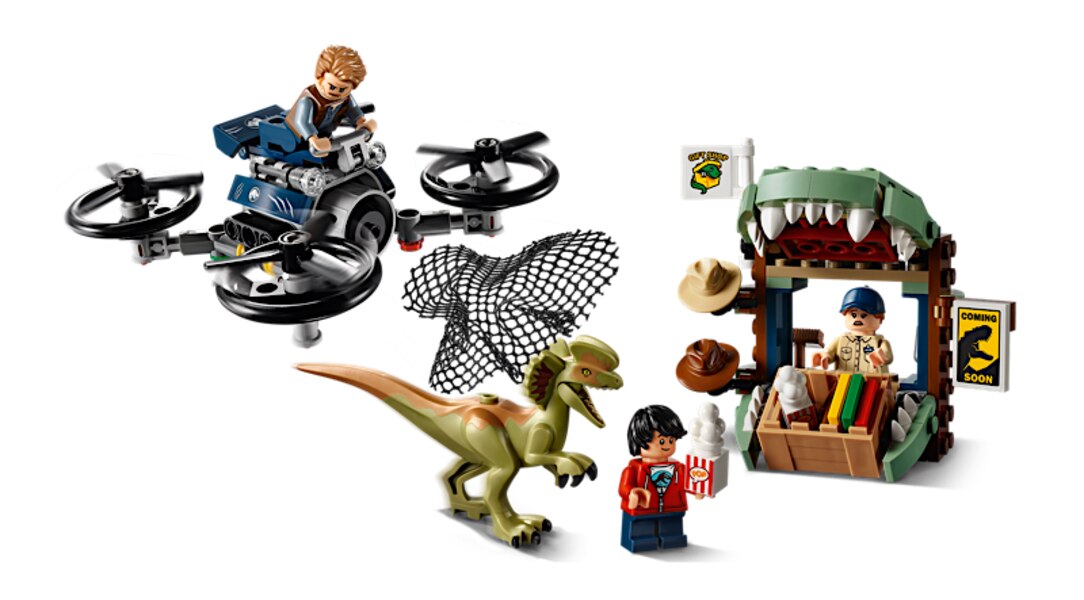 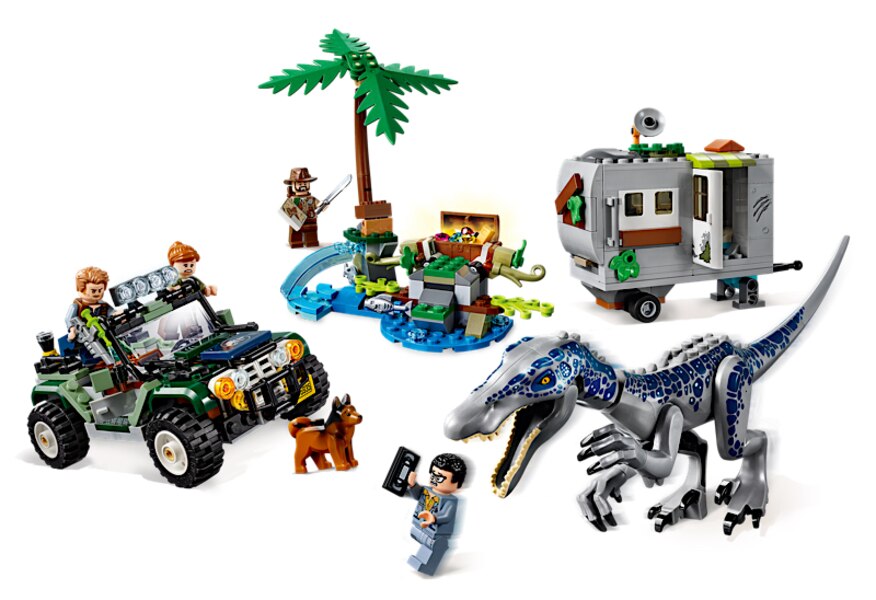 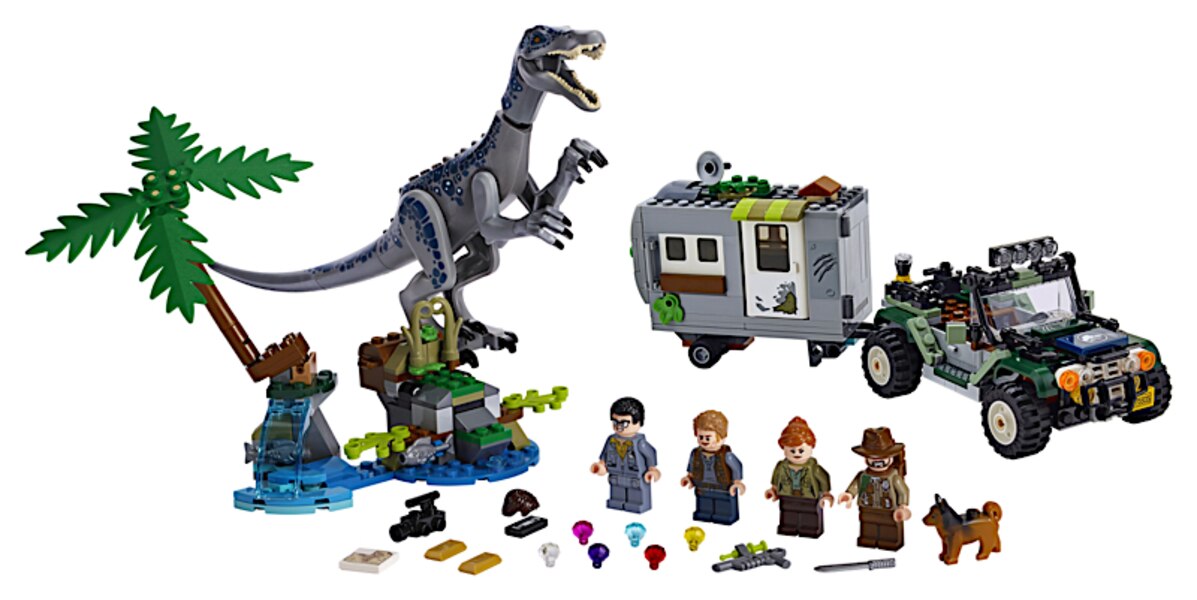 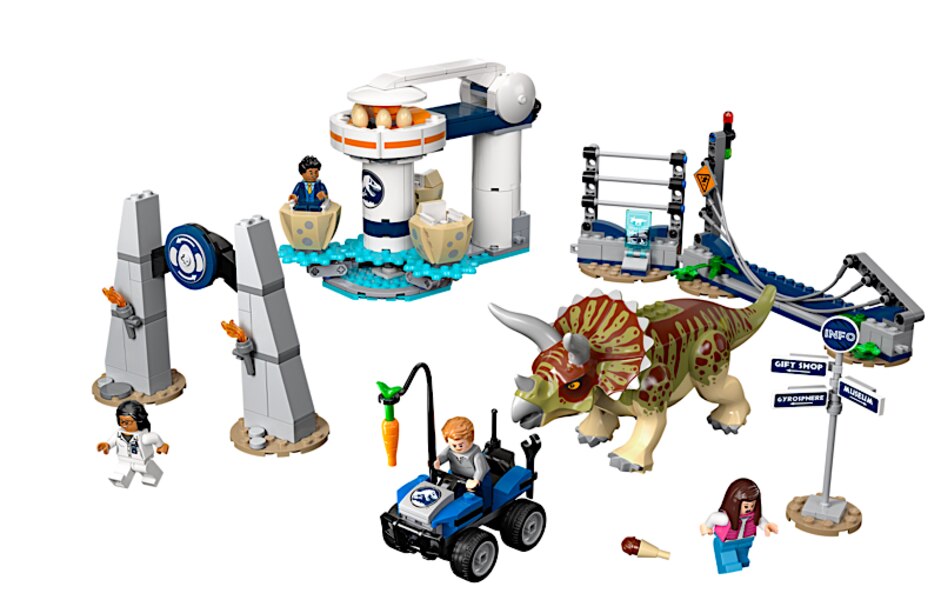 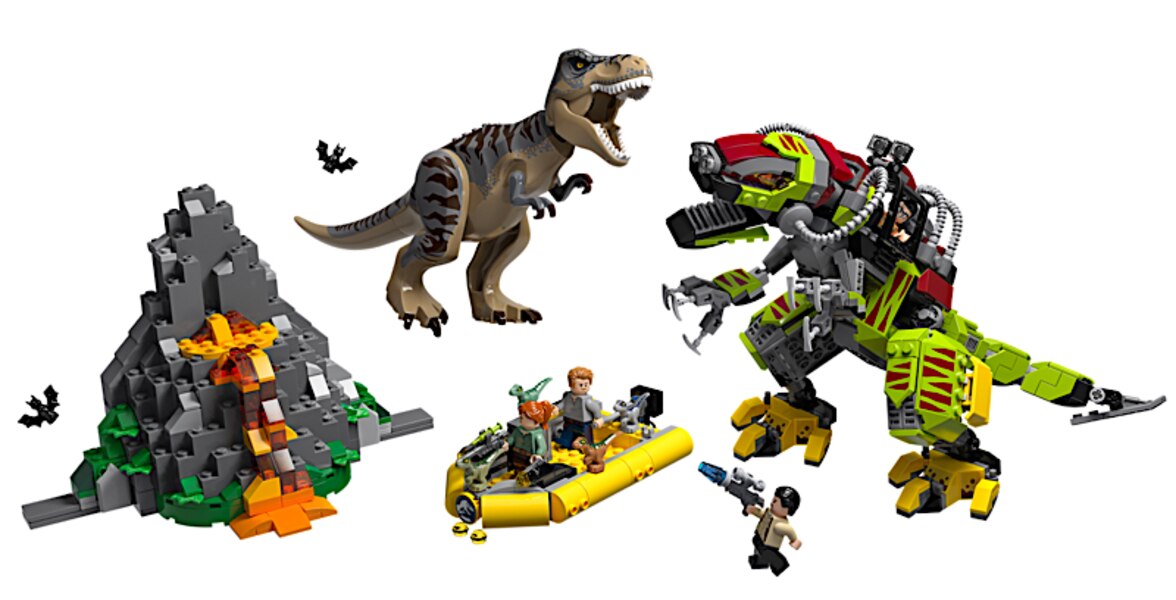