LEGO
by Jay Cochran
July 05, 2021
Fans of classic 90s sitcom Seinfeld can now recreate some of the most iconic scenes from the series with the new LEGO Ideas Seinfeld set from the LEGO Group. Featuring Jerry Seinfeld’s apartment, a buildable stage for the stand-up comic and a Festivus pole the set inspires builders to relive the most classic moments from the series.

The highly anticipated set was created by LEGO fan Brent Waller, from Brisbane, Australia, via his submission on the LEGO Ideas platform, a LEGO initiative that takes new ideas that have been imagined and voted for by fans and turns them into reality.

So, whether you want to re-enact the Story of Festivus, the Wallet Scene or the Fix Up, the set’s intricate props and features transport you directly back to New York in the 90s, enabling you to create your very own Show About Nothing in brick form.

LEGO fan designer, Brent, who is the co-founder of a video games company, loved LEGO as a kid but was re-introduced to it as an adult and combined with his skill as a 3D artist he set about designing his own LEGO creations – including creating the Seinfeld set. Talking about the design, Brent said, “I loved Seinfeld in the 90s and recently re-watched them all. I thought it was a travesty that a LEGO Seinfeld set didn’t exist so I made an effort to resolve that and make the best rendition of Jerry’s Apartment and the gang that I could. The biggest challenge was trying to cram as much detail from the show into the kitchen, all the cupboards, items in the cupboard and on the bench-tops. But I am very proud of how it turned out.”

Some of the instantly recognisable features include: the kitchen with buildable counter, fridge, microwave, oven and more; living room with a sofa; tables; an office; a buildable stage for stand-up comedian Jerry and a Festivus pole, collectively inspiring memories of comical moments from the show’s 180 episodes!

The set features 5 minifigures inspired by the iconic main characters and one notable postal worker from the show; Jerry Seinfeld, George Costanza, Cosmo Kramer, Elaine Benes and Newman are all included decked out in iconic 90s outfits.


Federico Begher, VP of Global Marketing at The LEGO Group commented, “The LEGO Ideas platform is a great way for fans to share their ideas with us and their passion for a particular theme. Not only did Brent have a personal desire to create this build, other fans agree and he gained the necessary 10,000 community votes needed for us to consider creating it into a product.

Seinfeld is a classic sit-com and a cultural icon that was huge in the 90s and still stands the test of time today. The combination of the quirky characters and the nostalgia of the show is the perfect fit for LEGO and when we saw the concept we just knew we had to make it. I am so excited to see how this has been brought this to life in LEGO form and the attention to detail from the furniture to some of the minifigures accessories.”

THAT IS ONE MAGIC LEGO IDEAS SEINFELD SET

-New LEGO Ideas Seinfeld set celebrates the iconic sitcom created by Jerry Seinfeld and Larry David
-The set is revealed on the anniversary of the first episode of the iconic comedy show – July 5th 1989
-The LEGO Ideas set was designed by LEGO fan Brent Waller, from Brisbane, Australia and features Jerry’s flat, a stand-up stage and the five iconic characters
Image 1 of 12 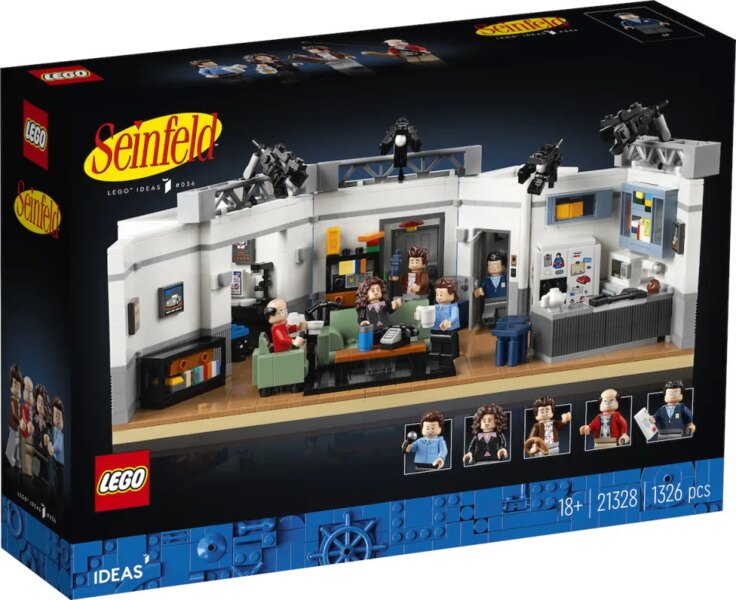 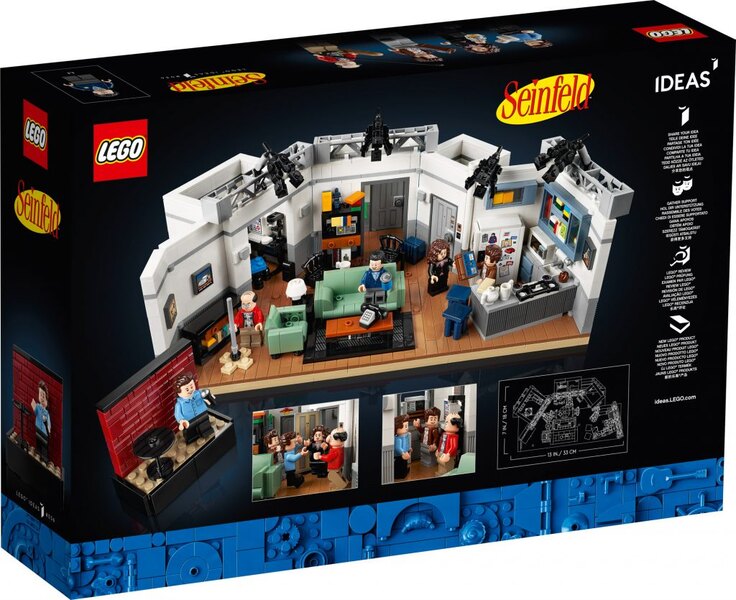 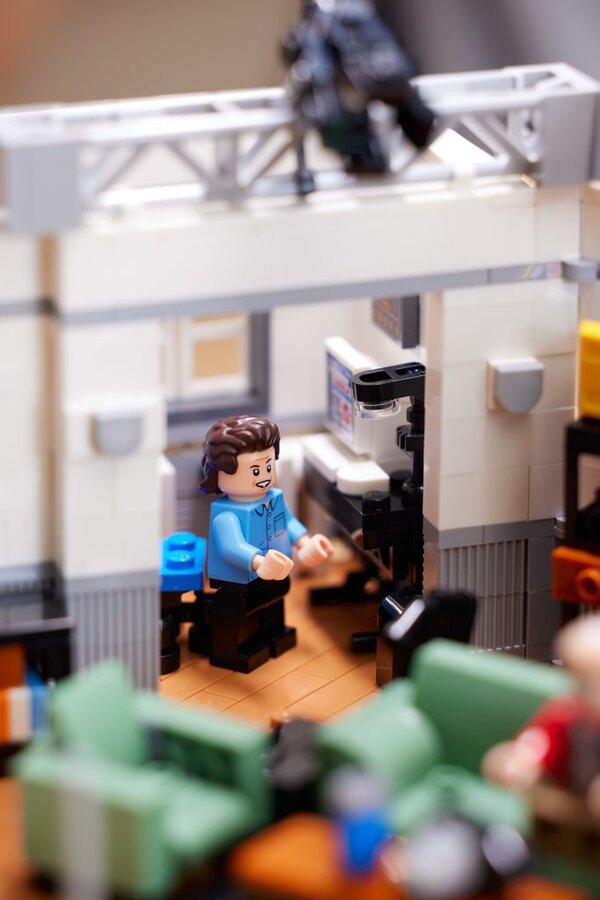 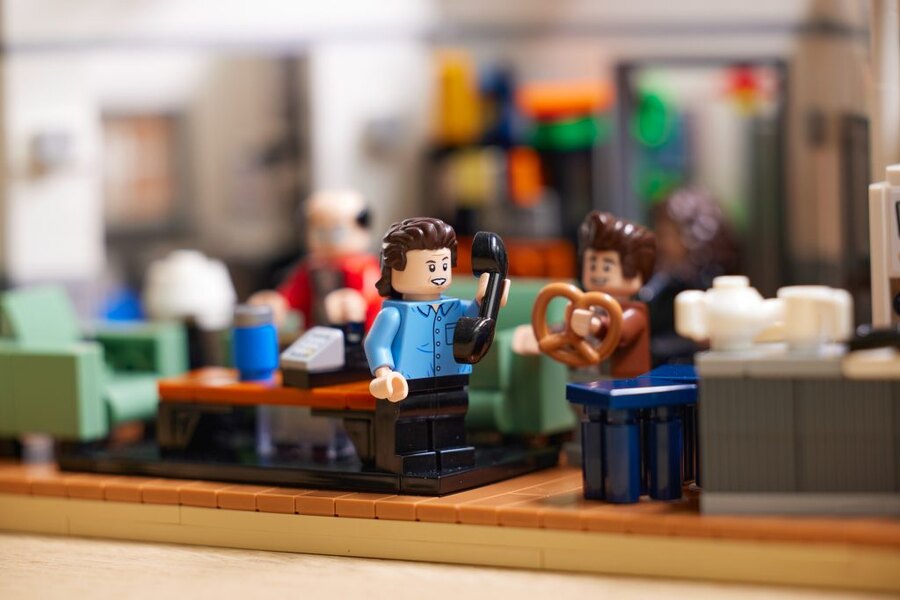 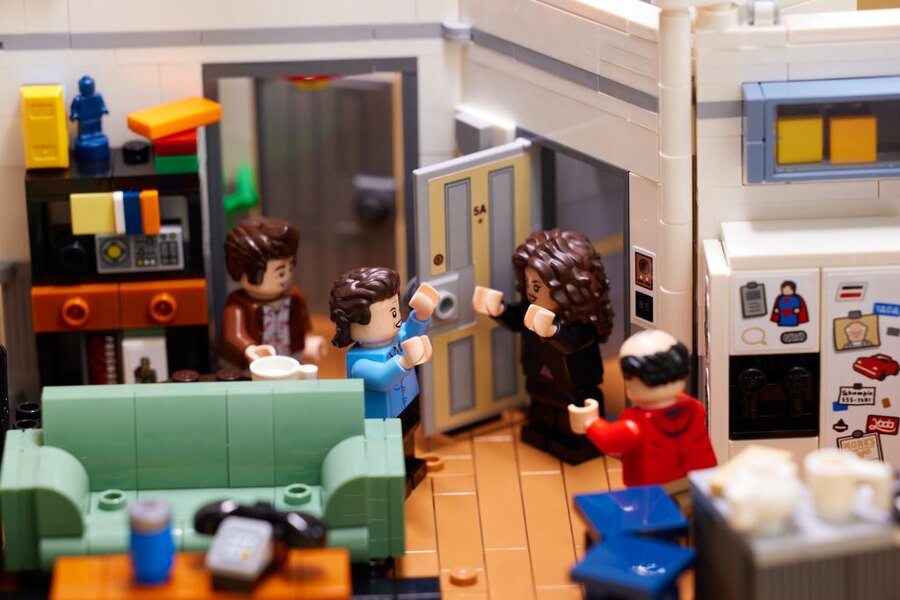 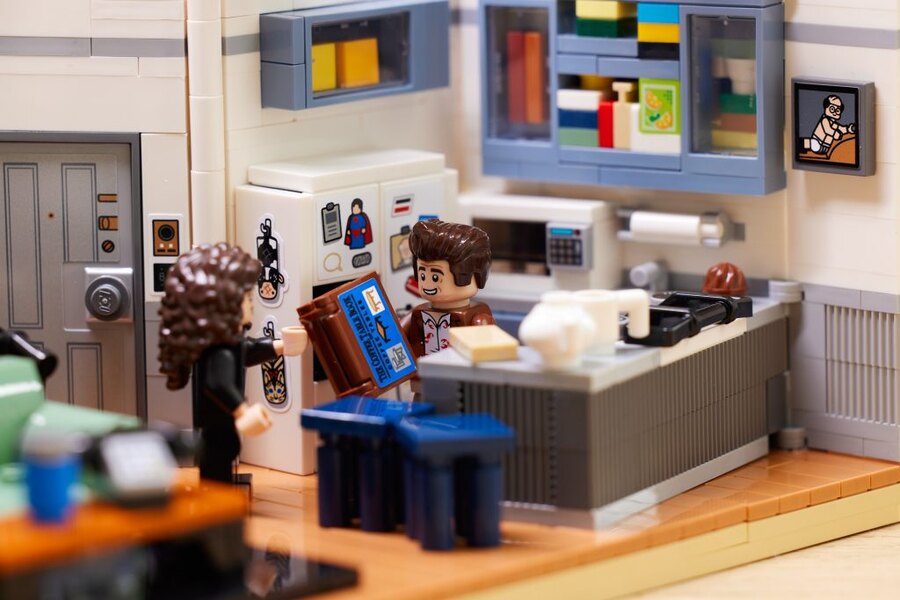 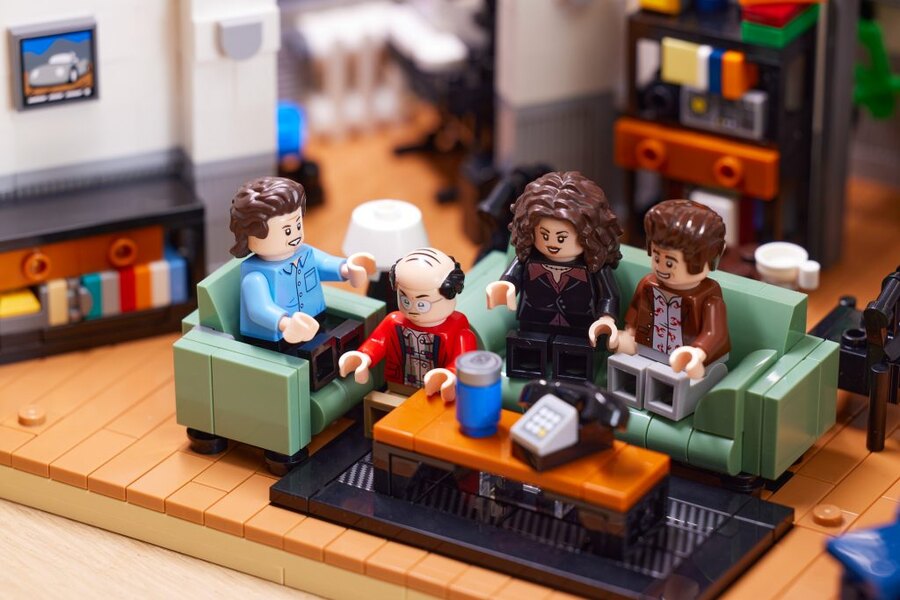 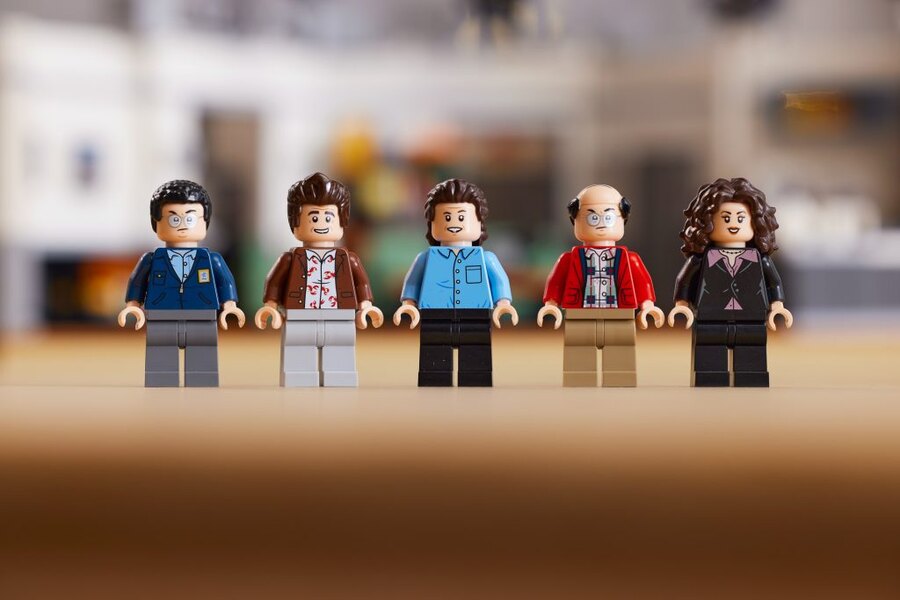 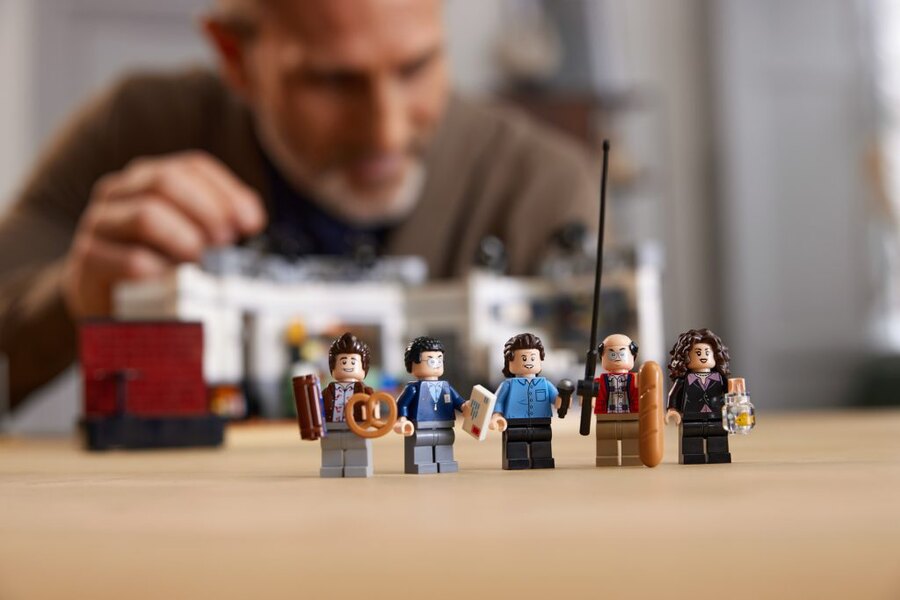 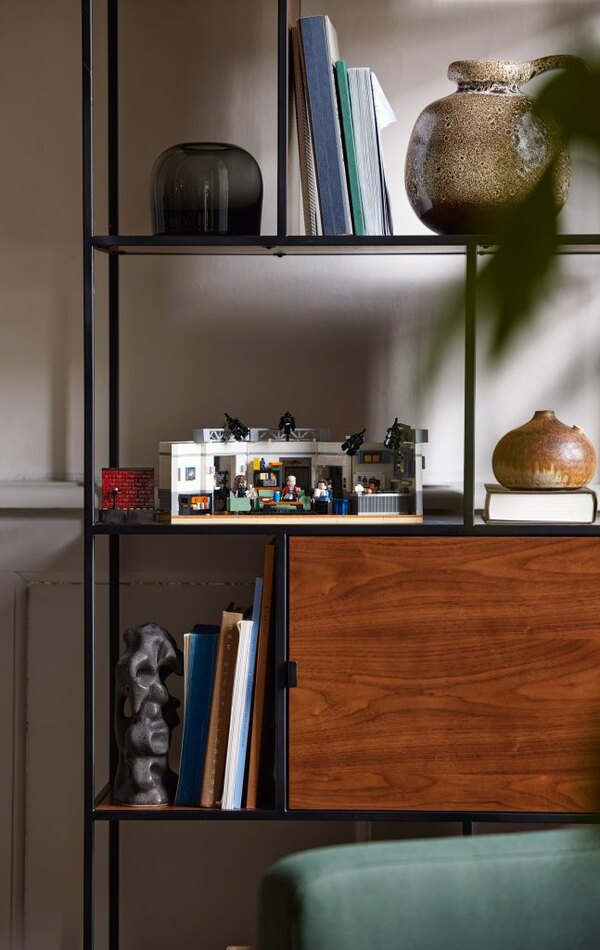 But does it include soup?

I just realized that they are doing a funding for a Frasier set, I didn't even know these things were a thing, amazing.

Can they just go ahead and do a LEGO Sitcoms line instead of taking up slots in the Lego Ideas line instead? We've already had "Big Bang Theory", two "FRIENDS" sets, and now "Seinfeld"? There were other much more interesting submissions in the Ideas theme and they keep doing these sitcoms sets? Why not spin them off into their own line instead and bring more beloved sitcoms to life (i.e. "Fresh Prince of Bel-Air" or "Golden Girls")that way instead of having to rely on fan-submissions?! Just seems like a waste of potential.

This is a great set. Now that we got Sienfeld and Friends Lego sets when can we expect a Mad About You set.

Apparently Jerry has an alternate "Hello, Newman" face on the other side of the head, but I'm having an impossible time finding a picture of it.

This so damn great, I love it, it seems extremely accurate, plus has a ton of fun little nods, I'm going to try and get this and I'm not even a big Lego guy.