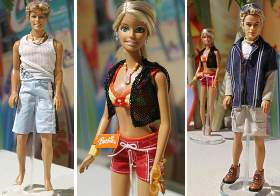 MALIBU, Calif. (June 29, 2004) - Since the BarbieÆ and KenÆ February break-up, BarbieÆ has been cruising in her Chevy SSR, soaking up sun, and hanging out at the Surf and Skate Shop with her best pals. With summer just around the corner, BarbieÆ is ready to date again and has looked to her friends from around the globe to help her choose a new crush. Over the past few weeks, more than two million girls worldwide logged on to Barbie.com to help BarbieÆ choose a new beau, and Blaineô doll is the undisputed winner.

"Since the break-up, BarbieÆ and KenÆ have remained friends and are looking forward to the release of their latest film, 'Barbieô as Princess and the Pauper,' coming out this fall," said Julia Jensen, publicist, BarbieÆ. "So spending the summer roaming the beach with her best friends and Blaineô is the perfect antidote for the upcoming busy fall press junket."

Beach living Cali Girlô style wouldn't be complete without a summer romance, and Blaineô, the suave new Aussie surfer in the group, caught more than a few waves when he snagged BarbieÆ doll's attention. With a mature character and worldly, seasoned surfing style, Blaineô doll is giving America's surfer girl some tips and tricks from international waters.

Blaineô doll was born an Australian boogie-boarder, and lived and surfed in Hawaii for a few years before moving to the states and becoming a west coast wave-rider. The older brother of Barbie's friend Summerô, Blaineô doll has sun-bleached hair and surf-bronzed skin, and sports the latest in beach and casual surfer gear. And, as the newest addition to the Cali Girlô fall collection, he can be found on store shelves in August for a suggested retail price of $14.99.

Mattel, Inc., (NYSE: MAT, www.mattel.com) is the worldwide leader in the design, manufacture and marketing of toys and family products, including BarbieÆ, the most popular fashion doll ever introduced. The Mattel family of toys and games is comprised of such best-selling brands as Hot WheelsÆ, MatchboxÆ, American GirlÆ, and Fisher-PriceÆ, which also includes Little PeopleÆ, Rescue Heroesô, Power WheelsÆ, as well as a wide array of entertainment-inspired toy lines. With worldwide headquarters in El Segundo, Calif., Mattel employs more than 25,000 people in 36 countries and sells products in more than 150 nations throughout the world. The Mattel vision is to be the world's premier toy brands -- today and tomorrow.