Entertainment
by Outsiders
June 02, 2017
THE FLASH: THE COMPLETE THIRD SEASON

Over Two Hours of Exciting Behind the Scenes Bonus Content, Including Five Crossover Featurettes, Deleted Scenes, Gag Reel, and much more!

Just in time for the fourth season premiere of the #1 show on The CW, catch the fastest man alive as he zigzags through the action-packed release of The Flash: The Complete Third Season from Warner Bros. Home Entertainment on Blu-ray and DVD on September 5, 2017. Delivering 5 million Total Viewers per episode, The Flash is a Top 10 series on all broadcast with Men 18-34 (#7) and Men 18-49 (#10) (Source: Nielsen National TV View Live + 7 Day Ratings, excluding repeats, specials, and <5 telecasts; 16-17 Season To-Date = 9/19/16-1/22/17; *major demos = Total Viewers, Adults 18-34, Adults 18-49, Adults 25-54). Fans will be able to revisit all 23 electrifying episodes from the third season, including the DC-crossover episode, plus over two hours of extra content, including behind-the-scenes featurettes on the "Invasion!" cross over episode and the "Duets" musical episode, a conversation with Andrew Kreisberg and Kevin Smith, deleted scenes, and more. The Flash: The Complete Third Season is priced to own at $49.99 SRP for the DVD and $54.97 SRP for the Blu-ray which includes a Digital Copy.

Struck by the supercharged fallout of a particle accelerator explosion, forensic scientist Barry Allen becomes the fastest man alive: The Flash! With his newfound time-warping speed and help from the S.T.A.R. Labs team - Caitlin Snow, Cisco Ramon and Harrison Wells - and his adoptive family, Detective Joe West and Joe's daughter Iris, the Scarlet Speedster runs circles around other metahumans set on wreaking havoc in Central City, while traveling between alternate universes and protecting our world from otherworldly threats. Last season, new dangers arrived from a parallel earth known as Earth-2, under the direction of an evil speedster named Zoom. In Season Three, Barry faces the unknown, as he irrevocably alters the timeline by saving his mother from the clutches of the Reverse-Flash. The only question now is - as he wrestles with the consequences of his own Flashpoint Paradox, including the wrathful Speed God Savitar - will he be able to find a way out?

"After three seasons, The Flash continues to score in ratings and ranks as the top series for The CW," said Rosemary Markson, WBHE Senior Vice President, TV Marketing. "Loaded with both in-depth and exclusive new bonus content, both fans of the show and DC fanboys will be eager to add the Blu-ray or DVD release to their collections."

With Blu-ray's unsurpassed picture and sound, The Flash: The Complete Third Season Blu-ray release will include 1080p Full HD Video with DTS-HD Master Audio for English 5.1. The 4-disc Blu-ray will feature a high-definition Blu-ray and a Digital Copy of all 23 episodes from Season Three.

Flashpoint
Paradox
Magenta
The New Rogues
Monster
Shade
Killer Frost
Invasion!
The Present
Borrowing Problems from the Future
Dead or Alive
Untouchable
Attack on Gorilla City
Attack on Central City
The Wrath of Savitar
Into the Speed Force
Duet
AbraKadabra
The Once and Future Flash
I Know Who You Are
Cause and Effect
Infantino Street
Finish Line

The Flash: 2016 Comic-Con Panel
A Flash in Time: Time Travel in the Flash Universe
Villain School: The Flash Rogues
Allied: The Invasion Complex (The Flash)
Rise of Gorilla City
The Flash: I'm Your Super Friend
The Flash: Hitting the Fast Note
Harmony in a Flash
Synchronicity in a Flash
Deleted Scenes
Gag Reel

About DC Entertainment
DC Entertainment, home to iconic brands DC (Superman, Batman, Green Lantern, Wonder Woman, The Flash, etc.), Vertigo (Sandman, Fables, etc.) and MAD, is the creative division charged with strategically integrating across Warner Bros. and Time Warner. DC Entertainment works in concert with many key Warner Bros. divisions to unleash its stories and characters across all media, including but not limited to film, television, consumer products, home entertainment, and interactive games. Publishing thousands of comic books, graphic novels and magazines each year, DC Entertainment is one of the largest English-language publishers of comics in the world. THE FLASH and all related characters and elements are trademarks of and (c)DC Comics. 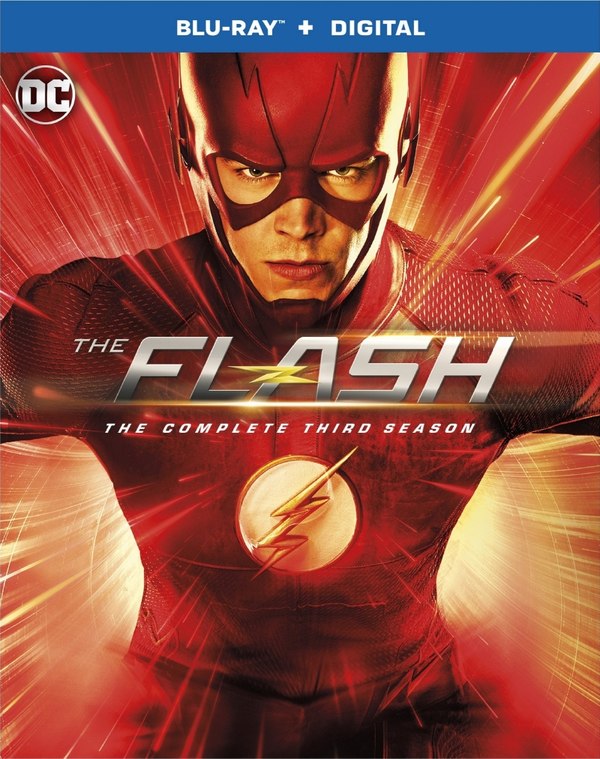