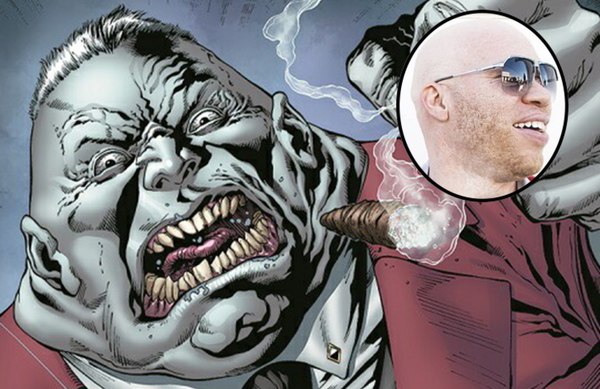 Described as an African-American man with albinism, Tobias Whale is the leader of Freeland’s most feared gang—The 100. But in the days before Black Lightning, Tobias was a politician, rising up the ranks of local government through corrupt and illegal means. That was until he was brought down by Alvin Pierce, Jefferson’s father. Enraged, Tobias murdered Alvin and was driven underground into exile. It’s here he found a place to rebuild, growing into the violent and methodical leader of The 100 as we find him today. But Black Lightning’s recent return has ignited Tobias’ desire to emerge from the shadows and face his biggest adversary, Jefferson Pierce AKA Black Lightning.

Of course, much of this is likely to sound familiar to anyone who’s read the classic Black Lightning comics. Tobias Whale has been a part of Black Lightning’s world from the very beginning. A large, often overweight figure, Tobias was first introduced alongside Jefferson Pierce in 1977’s BLACK LIGHTNING #1 and has gone on to serve as one of Black Lightning’s most persistent villains. As the leader of The 100, he’s had his sizable hands involved in just about every underworld activity you can think of, and on occasion has found himself running up against Batman as well as Black Lightning. While Tobias appeared in 2013’s animated Beware the Batman, his recurring role on Black Lightning will be his most prominent non-comic appearance so far.

“I was excited about Krondon when I saw his audition,” says Black Lightning Executive Producer Salim Akil. “He’s going to make a great Tobias! His authentic street sensibility along with an insightful intelligence is perfect for the Tobias character arc. Not to mention his regal physical bearing will be additive to making our show exciting and different.”

If Krondon isn’t a name you’re familiar with, you may need to look toward the world of music rather than TV. Born and raised in South Central LA, Krondon (KRNDN) is a solo rapper and the front man for Strong Arm Steady (SAS), who recently released his debut album, “Everything’s Nothing.” Prior to that, he wrote tracks for artists including Snoop Dogg, Dr. Dre and Xzibit.