Ruby Rose Cast As 'Batwoman' On The CW 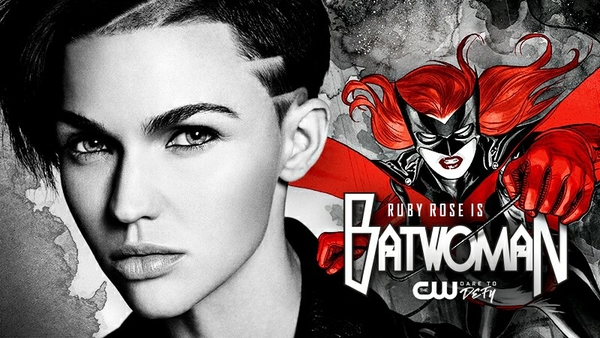 Orange Is the New Black‘s Ruby Rose has been cast as "Batwoman" to appear in The CW's DC Crossover Event in December. As previously announced, the BATWOMAN series is in development for the 2019-20 season.

Armed with a passion for social justice and a flair for speaking her mind, Kate Kane soars onto the streets of Gotham as Batwoman, an out lesbian and highly trained street fighter primed to snuff out the failing city's criminal resurgence. But don't call her a hero yet. In a city desperate for a savior, Kate must overcome her own demons before embracing the call to be Gotham's symbol of hope. Based on the characters from DC.

My brother called me a little while ago to tell me about a head-line he just read on the net.

Apparently, gay groups are up in arms because Ruby Rose is "Not Gay Enough" to play Batwoman. Apparently, the backlash has gotten so bad, the poor woman has had to quit Twitter. To be clear, she's being cyber-bullied not because she's gay, but because she doesn't meet somebody's idea of "Gay Enough."

My personal beliefs aside, If I were them, I'd be giving the lady kudos for not only being gay-proud,but forscoring a role as one of the first openly gay superheroes. Never have the words "Damned if you do, damned if you don't" been more appropriate.

We as a society are well and truly screwed up.

To be fair, almost every single ongoing show be it sitcom or drama has had some sort of current event type of storyline infused within it, be it one show that talks about a certain subject or a whole season that revolves around one... so that doesn't bother me there, I think the main pushback is because of the fans that already know of Berlanti, but I think that is his fault for pushing it so hard instead of being subtle about it. I feel that's why in the past, it wasn't as bad as people remember because, Character A had a 3rd cousin that was gay and dealing with pressure from their aunt about it and nowadays, the main character is gay, lol.

I have no problem with it, because again, it's the world we live in... today... as long as it doesn't interfere with good storytelling. So far I feel the CW universe has done a good job with this (granted I'm a couple seasons behind )... I'll give it a chance because, it's one step closer to Batman, lol... I do feel that after they skirt around him for so long, one of these years, we will finally get one... heck, I'd be happy with an ongoing animated batman series now, ?

I guess only time will tell.

Believe or not I haven't watchedjohn Wick 2 yet so I can't comment on her performance.

Come on Fox is not offensive just politically incorrect as it should be. I remmebrmber shows like Seinfeld. They would never work today with this PC police.

They planned most Arrowverse shows to last for ten seasons. If they keep like this it probably won't last that long. I guess most people that watch these shows are not even real comic book readers. They have read some comics from the DC universe, but are not followers like hat know everything and read it straight for years. So they don't really care. They care about stufflike Olicity.

Yeah, I didn't know who this lady was until the announcement that she was cast as Batwoman, turns out I had seen her in John Wick 2 but otherwise: eh. I agree the release description is too on the nose I'm sure they could have worded that better. I feel that Supergirl already tackled the themes that this show is looking to address, in the case of Supergirl they weren't always tastefully done but luckily acting wise Melissa Benoist is the strongest lead in the Arrowverse shows so you can count on an engaging performance and charisma even when the plot makes you roll your eyes. I still think Supergirl is the strongest of the bunch, Flash was Godawful this season and it looks like they still haven't learned their lesson, Legends is gimmicky but it's still enjoyable in a campy sort of way at least it knows what kind show they are and just embrace it, the Felicity and friends show ranged from ok to good this season even with the Diggle and Oliver's Civil war plot but they have actually turned their supporting characters from annoying to compelling with the exception of Felicity of course. Black Lightning was good if you can get past the look at us we are so "woke" that we are tackling racism by making every white person except one a racist a-hole. Also, I wonder how they are gonna tackle the existence of the character? Are they gonna cast someone as Batman in a limited appearance a la Supergirl? Are they just gonna mention Bruce Wayne/Batman but not show him like they did in Arrow? Or are they gonna completely forego Batman and just have her be a woman who dresses as a bat to fight social injustice?

Sadly, this kind of pandering/indoctrination is nothing new. Remember, this is the CW, lefty pandering is their thing, like Fox and being offensive.

For what its worth, the really Great shows (most anything you see onthe Big 3)don't feel they have to do this sort of thing. TheGood shows (Agents of SHIELD,MacGyver reboot, the REAL Star Treks)do it, bit not in a "slap to the face" kinda way, and they don't get carried away with it... usually. The Sorta-Good shows (The Flash, Supergirl Season 3)do it, but you can usually hold your nose and enjoy the show anyway. The rest... Good Luck.

If they based the series solely on this will sink even more than Supergirl. I am very skeptical about this. Why this character? Why not Batgirl or even return with the Huntress and develop that character.

In my mind they pick their material just based of the o called diversity and nothing else. It's very tiresome.

I thought she was pretty awesome in John Wick 2.

I don't care for Arrow, Supergirl or Gotham but I love The Flash and Legends. I'll check the show out and see what's up.

Supergirl improved quite a bit from season 2, but if the preview trailer and press releases are any indication, they're gonna be making a big back-pedal this season. Arrow is as Arrow has always been, a great concept hopelessly lost in the execution. Flash has gone from my favorite of all the Arrowverse shows to the one I despise most. I have yet, nor do I ever intend to, watch Gotham. If I wanted a Batman series without Batman, I'd watch reruns of CSI: Miami. Had high hopes, and low expectations, for Black Lightning. Unfortunately, it turned out to be exactly the show I thought it would be.

I'm having similar feelings for Batwoman. I want to love it, but it has all the ear-marks of another steaming pile of Berlanti.

Not giving up hope though. Assuming the CW goes through with the show, I'll give it a shot.

I thought she was pretty awesome in John Wick 2.

I don't care for Arrow, Supergirl or Gotham but I love The Flash and Legends. I'll check the show out and see what's up.

I have to echo @JoeRhyno, in that Im entirely unfamiliar with Ruby Rose... But, I couldnt be more stoked for a live-action Batwoman. Even though I havent really gotten into a whole lot of the CWs television offerings apart from Riverdale. But, Im cautiously optimistic that theyll do her justice.

Not familiar with the actress, but I'll give her a shot, remember what people first said about Wonder Woman and Gal Gadot, ?

For the sake of Ms. Rose, I hope she got the job based on her skills as an actress and not solely on the grounds of her sexual preference.

I wouldn't wish that kind of tokenism BS on anybody.

Search Online Stores for Ruby Rose Cast As 'B