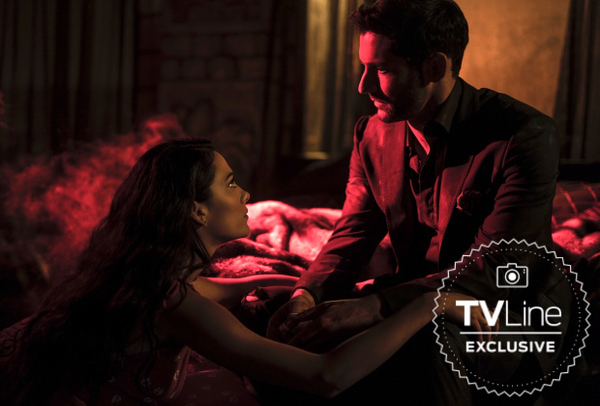 The fourth season of Lucifer is currently under production for Netflix and TVLine has released an new image featuring Eve aka the first lady (played by Imposters‘ Inbar Lavi), explores what Lucifer truly desires.

“Lucifer is in a very vulnerable moment, emotionally — not that he would ever recognize that — when out of nowhere, Eve turns up,” series star Tom Ellis shared during TVLine’s visit to the set, where they were filming Episode 10 aka Season 4’s finale. Laying eyes on the original sinner “brings back so much for Lucifer, about the man he used to be — or, the Devil he used to be,” Ellis added. “She’s never forgotten about him. And she loves him.”

And while Chloe will certainly have thoughts about Lucifer’s ex trying to mark her spot, Detective Decker’s portrayer thinks the new arrival is, well, heavenly. “Inbar plays Eve so uniquely, and well…. She just brings a whole new vibe to the show,” Lauren German effused. “She has this ethereal and light and sensual energy.”

Reeling from the aftermath of Chloe seeing his devil face, Lucifer faces a new challenge: Eve, the original sinner herself, is back. Does she want revenge for when he tempted her out of Eden oh so many years ago or something else entirely? Lucifer Season 4 premieres May 8 only on Netflix.