Entertainment
by Outsiders
July 27, 2021
It’s been 20 years since Clark Kent first arrived in Kansas, and in honor of the 20th Anniversary of the remarkable series, Smallville: The Complete Series 20th Anniversary Edition will soar onto Blu-ray for the first time ever from Warner Bros. Home Entertainment on October 19, 2021. This set for the ultimate fan features all 218 episodes along with over 28 hours of bonus features from all 10 incredible seasons, plus Digital Copy (US Only). Smallville: The Complete Series 20th Anniversary Edition Blu-ray is priced to own at $179.99 SRP ($209.99 in Canada) and will also be available on DVD for $154.99 SRP ($184.99 in Canada).

The groundbreaking, Emmy®-winning 10-season hit that redefined the origins of the world’s greatest super hero is all here – from Krypton refugee Kal-El’s arrival on Earth through his tumultuous teen years to Clark Kent’s final steps toward embracing his destiny as the Man of Steel. Relive a decade’s worth of thrills in fantastic adventures full of action, heart and humor in abundance, all anchored by the marvelous performance of Tom Welling at its center. Savor again the series’ thoughtful and imaginative integration and reinvention of the iconic characters of DC lore. And let your spirits be lifted up, up and away.

MORE THAN 28 HOURS OF BONUS FEATURES

The Adventures of Superboy – The original 1961 pilot starring John Rockwell.
A Retrospective Look at the Series’ 10-Year Journey – An in-depth, season-by-season look at the creation of this landmark television series. Highlights include interviews with Tom Welling, Eric Durance, Michael Rosenbaum, Phil Morris, John Schneider and many more, as well as rare behind-the-scenes footage.
A Decade of Comic-Con Featurette
Paley Festival Featurette
Smallville’s 100th Episode: Making of a Milestone – An extended version of the original featurette included in the Season 5 set.
Secret Origin: The American Story of DC Comics – A feature length documentary chronicling DC’s 75 years of challenges, creativity, and triumph.
Audio Commentaries, Deleted and Extended Scenes, Gag Reels, Behind-the-scenes featurettes and much more from all 10 seasons!
Image 1 of 2 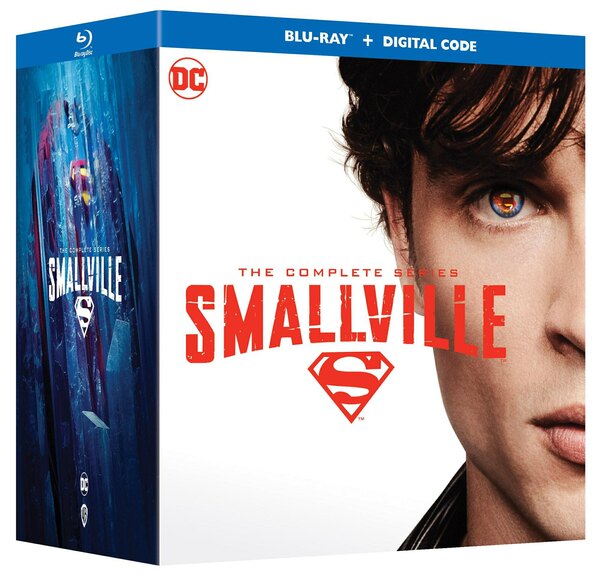 Loved this show back in the day when it aired. I even would get the dvd sets for chirstmas every year. Very rare that Id get shows on home video. Eventually just sold them off since they arent that rewatchable really. Not sure how Id feel about the show nowadays but it will always have a place in my nostalgia bubble.

Has this been 20 freaking years ago. Holycrikey. This must be a joke right. Ha ha. Almost got me there. No way that has been 20 years. Not fooling me. Mumble mumble.

I really loved watching that show in my school days, it seemed like fun, but today I'm not sure it will hold up as much, but it will always have special place in my fanboy heart.