GI Joe
by Jay Cochran
February 25, 2010
We reported about this the other week during Hasbro's Toy Fair Collector event, but wanted to follow up about it with more details.

Hasbro will be releasing a new 3 3/4" Sgt Slaughter figure this year as their 2010 San Diego Comic Con exclusive. They will be releasing two versions of Slaughter, much like was done a few years ago with the "Pimp Daddy" Destro figure that had a gold head and a silver head. The main figure will be in his traditional USA shirt and use 100% new tooling while the variant will be based on the original version that came with the Triple T tank back in the 80's. The variant has quit a bit of new tooling but not 100%.

John Warden who worked on most of the 25th Anniversary line is the person sculpting this one and the figure will have a whistle and hat, and possibly more accessories. These should also end up being sold on the HasbroToyShop.com website after the con like Hasbro's exclusive have been offered in previous years.

For those attending the con, Sgt. Slaughter himself will be in attendance at the Hasbro Booth. No word on price, nor have any images of the actual figures been released yet. We did however dig up this image of a custom Sgt Slaughter figure Hasbro had done a few years ago that was on display at previous comic-con, to perhaps give you an idea of what this new figure might look like. You can check that out below, and stay-tuned to TNI for more information on these and other SDCC exclusive for 2010 in the coming days.
Image 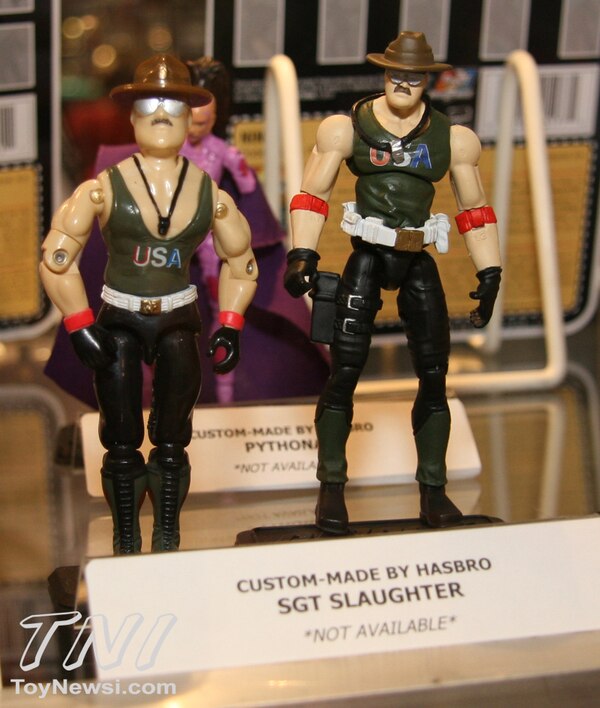