GI Joe
by Jay Cochran
May 01, 2010
The folks at Hasbro are on hand today at the 2010 G.I.Joe Convention to talk to fans in a panel about what is coming for G.I.Joe this year and early next year. We have now added some video from the panel as well as images down below in our GALLERY. Unfortunately no video or images of the portion dealing with the new animated series was allowed.

Low Light will be in 25th Anniversary style with wrist articulation so he can be posed in a sniper pose. He will have two big backpacks that have tons of accessories like a tiny bullet and a rifle that can be broken down.

The new cartoon will be called..... "Renegades", Coming this fall to the network "The Hub: which is a joint venture with Discovery and launches in October 2010. Margaret Loesch who was executive producer on the classic Joe and Transformers cartoon will be running the network.

Hasbro Studios is working closely with The Hub and working on a whole bunch of new programing besides G.I.Joe.

Will there be toys.... Yes! The show is going back to the beginning. They loved Resolute and thought it was great, but they wanted to go back and do a "G.I.Joe Year 1". G.I.Joe will start out in the beginning on the run from someone or something, that may not be a snake.

They are going to show a clip but we are not allowed to film it. The show will not use American Animation, but a different style from what everyone else does. They went back and looked at American Illustration art covers from the 50's and 60's that pay attention to light and shadows. From what I saw it did look fairly similar to what we saw in "Resolute."

Things are not what they may seem, Cobra might have a public and private face.

The images they sowed for the cartoon were of Duke and Snake-Eyes. Duke will have blond hair.

There is an Animated toy line will begin in spring 2011, and it will be 3.75" with articulation we have come to expect from GIJoe. There of course will also be vehicles.

The story will be very linear, meaning what happens in one episode will effect the next one, and there will also be self-contained stories. The pilot is 2-part and the 1st season will be 26 episodes. Hasbro's has a real game plan, and already discussing what will happen in season 4 and 5. It helps when the company doing the show owns part of the network.

Destro's mask will not be made of nanomites. Cobra Commander will have his classic mask. A 2-part arc with Storm Shadow and Snake-Eyes is in the works.

There will be a core team of Joes that you will really be able to get to know. There are a lot of hard-core "Geeks" and fans on the writing staff. The show is not CG because they wanted to be able to introduce as many characters and vehicles as possible, and CG would be to expensive to do that.

You will have stories where we will see characters joining the team as they go along, and there will also be characters already on the team like Snow Job, but won't show up till there is a specific need, like a mission that requires going to the arctic. This is really going to be "G.I.Joe Year 1" so the team will start small and grow big over the years.

The TV rating will be TBD, but it wont be as dark as "Resolute." They will push things as much as possible, but they still want it to be watchable by kids. The stories won't be dumbed down. They will be written as if the writers were writing it for themselves. That will be for all the shows that they do on the Hub (Take note Transformer fans).

Jinx will be in the show at some point. Wouldn't say if Road Block or Heavy Duty would be used, but don't expect both.

Signature weapons and vehicles will be true to the characters and simple things like PDA's and phones will be unique between the teams, Joe and Cobra. And if someone looses a PDA in one episode they will have to get a new one, they will be tracking little details like that in this show.

There will also be Classic Vehicles like the Vamp. Maybe re-imagines a little bit and they may go through changes to become the vehicles we know.

Ripcord's skin color was a question Hasbro avoided answering, it was joked could look like Michael Jackson.

Snake-Eyes, we might see his face and hear him speak at first because the series is going back to the early days.

Bullets are a no, it is a kids network, but they have made creative solutions and got away with some things in one episode. Things like no bullets won't detract from the show. Anything a kid could find in his parents gun cabinet, they tried to stay away from.

No Polly the Parrot.

That wraps up the panel. Stay-tuned to TNI for some images of the toys mentioned above. 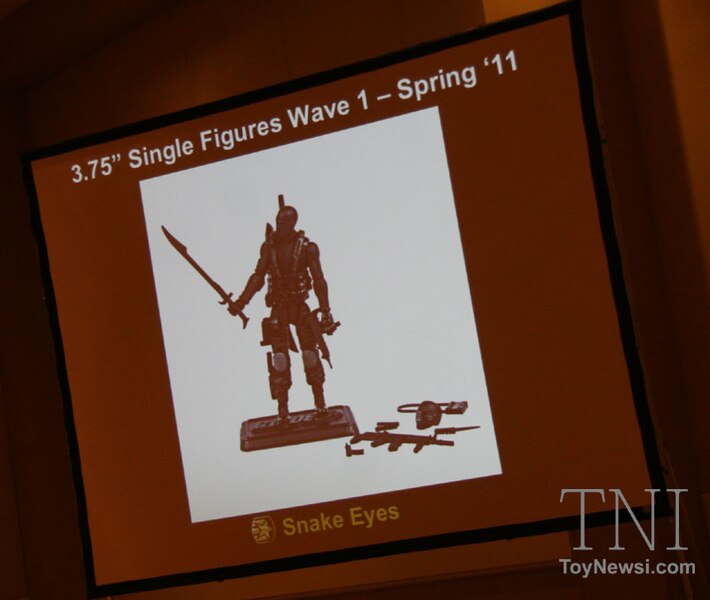 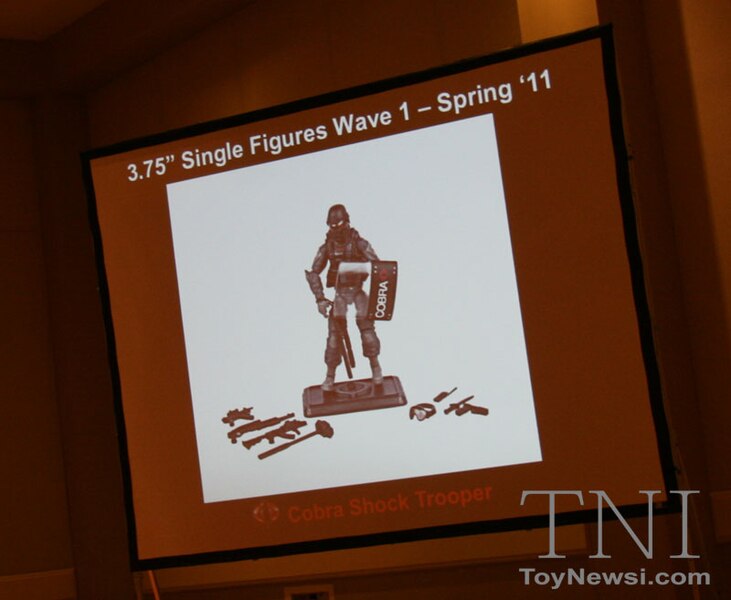 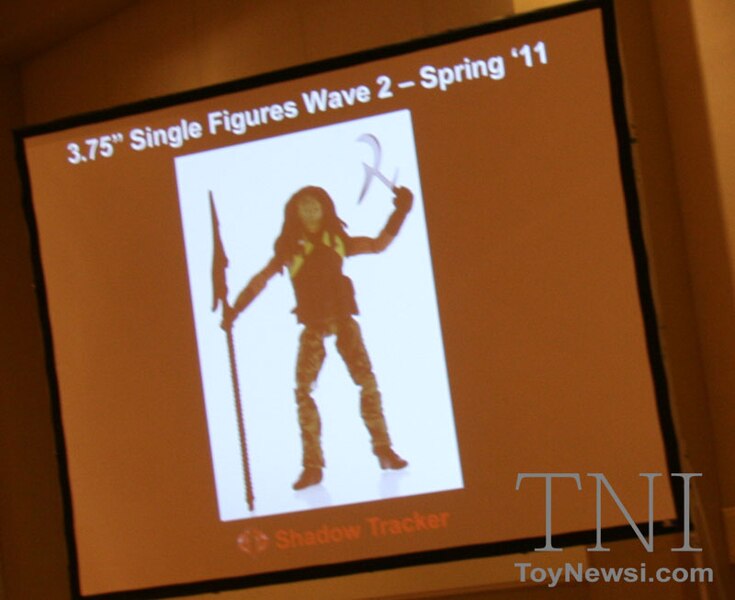 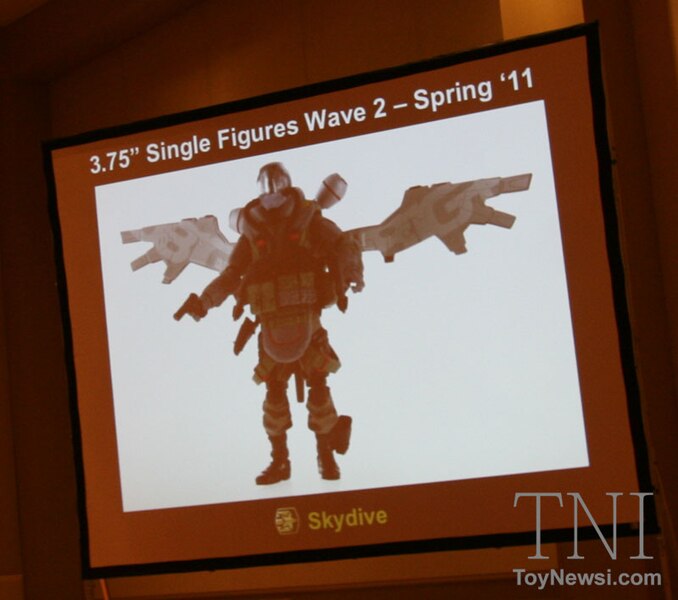 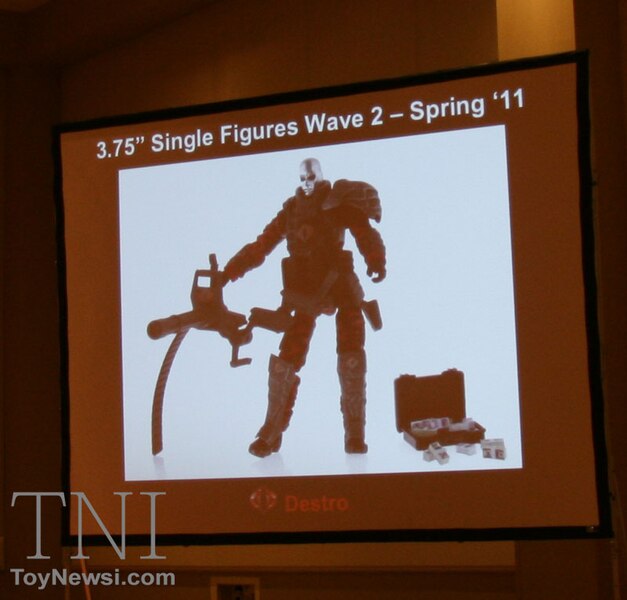 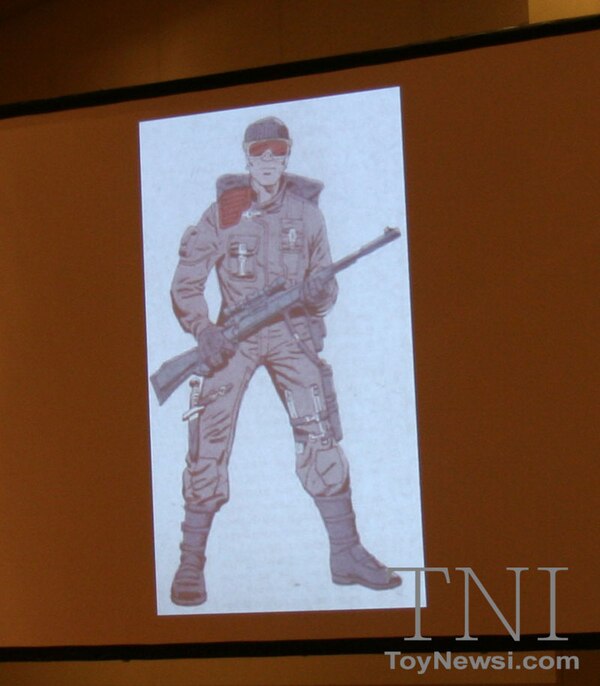 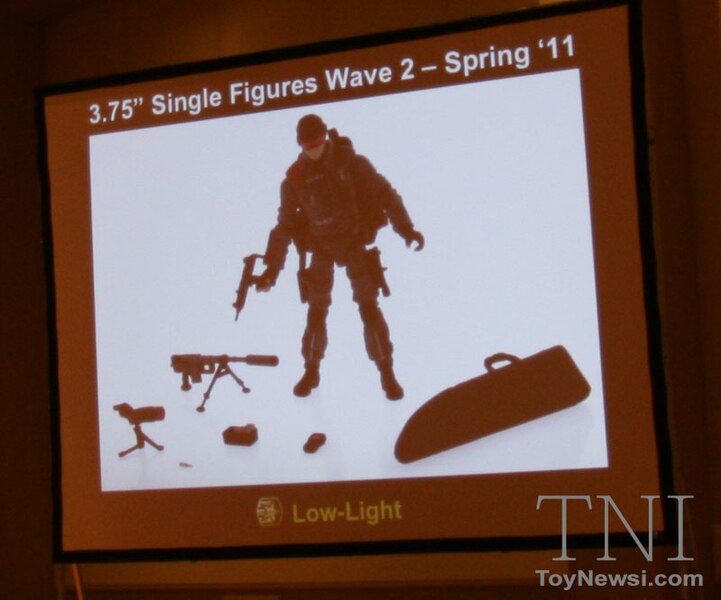 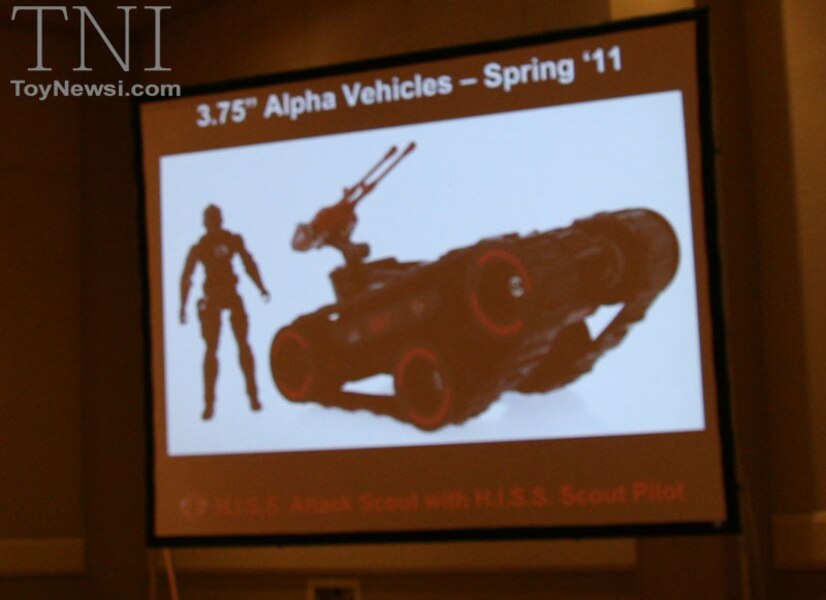 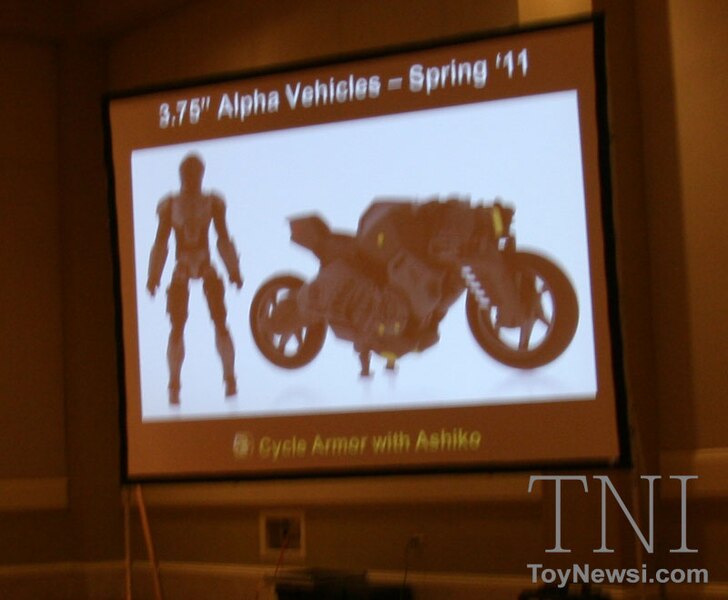 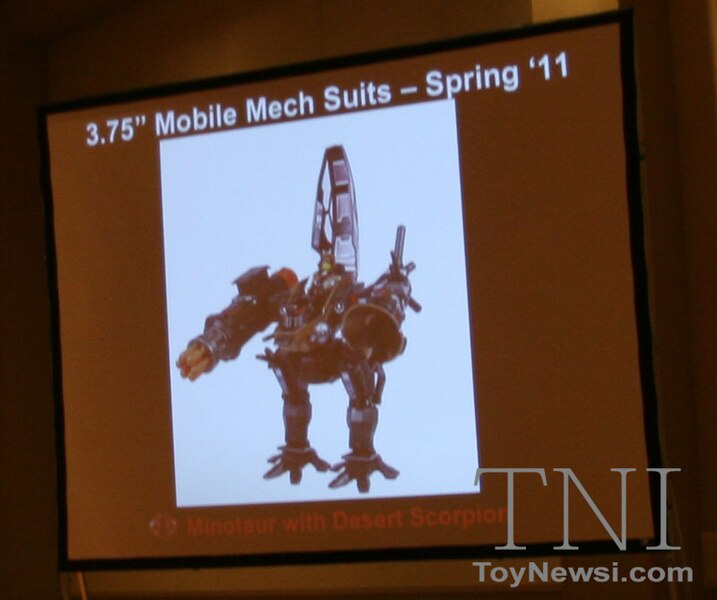 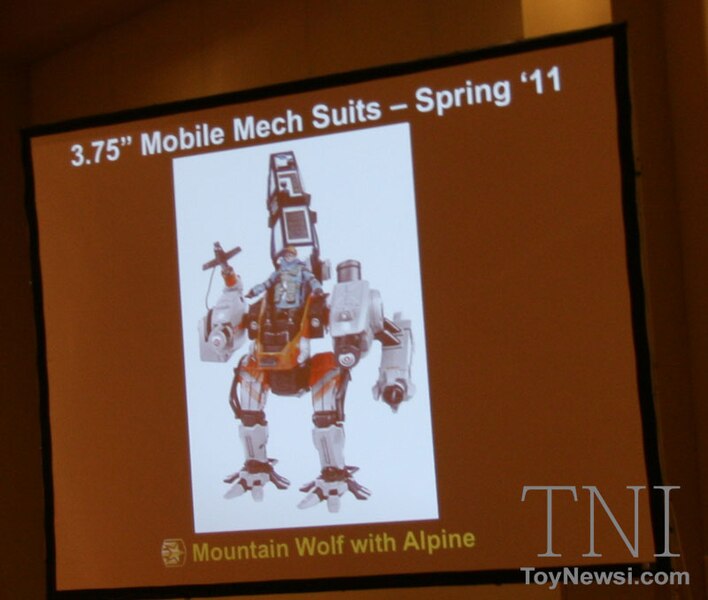 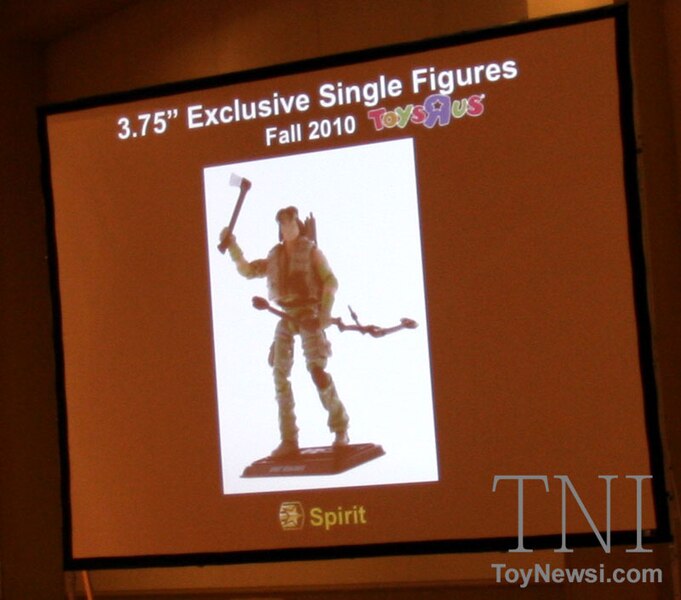 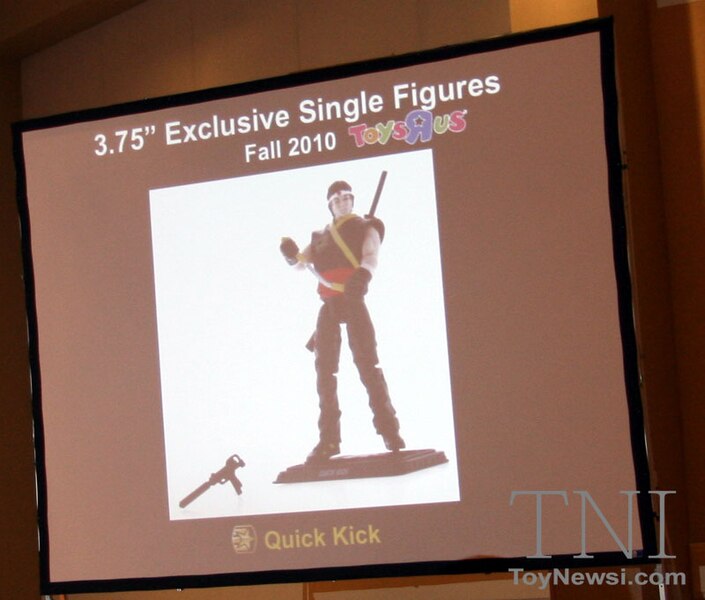 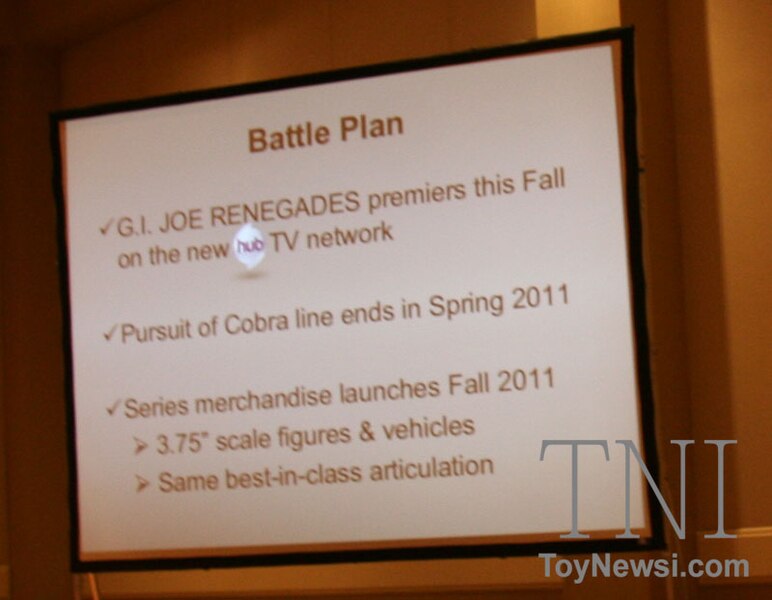