GI Joe
by Jay Cochran
October 10, 2014
The fan-favorite G.I. JOE ninja is set to strike out on his own in an all-new series, G.I. JOE: Snake Eyes: Agent of COBRA! Debuting in January of 2015, this series builds upon the acclaimed new G.I. JOE series, released last month. With an exciting creative team and a secretive mission, the stakes have never been higher!

Snake Eyes’ shocking return to the world of G.I. JOE will see the long-time hero taking on a new role as a member of COBRA! Breaking DESTRO out of prison is just his first stop on this game-changing mission that will pit Snake Eyes directly against the G.I. JOE team led by Scarlett.

"Snake Eyes has been gone from the pages of IDW's G.I. JOE books for almost two years, so his return alone would make for an incredible story," says series editor Carlos Guzman. "But Mike's idea to have him return on the side of Cobra begs so many exciting questions: What could cause Snake Eyes to join the enemy? How could Cobra convince G.I. JOE's most dangerous warrior to betray his unit? What will G.I. JOE do when they find out the ninja commando has returned… but is now an agent for the villainous organization? There was no doubt that the answers would make this series one of the best G.I. JOE stories ever told!"

Praised for his work on G.I. JOE: The Cobra Files, Mike Costa returns to the world of G.I. JOE, writing this explosive series. Joined by artist Paolo Villanelli, who will provide covers and interior art, the duo will set Snake Eyes against unexpected new dangers.

"SNAKE EYES: AGENT OF COBRA is, without a doubt, the most exciting and action-packed story I've ever written in my six-year history with the G.I. JOE universe,” said Mike Costa. “I wanted to take the dark psychology and intrigue that made G.I. JOE: COBRA so fun to work on, and graft it into the DNA of a big action movie, starring G.I. JOE's most iconic character. It's probably my ultimate G.I. JOE story, and it's really been fun to work on. I'd always tried to approach G.I. JOE: COBRA by asking myself "how could this get worse?" Well, Snake Eyes is working for Cobra. I think I've answered that question"

Find out the secrets of COBRA this January first-hand with Snake Eyes, and be sure to pre-order and reserve a special variant cover by Drew Johnson!
Image 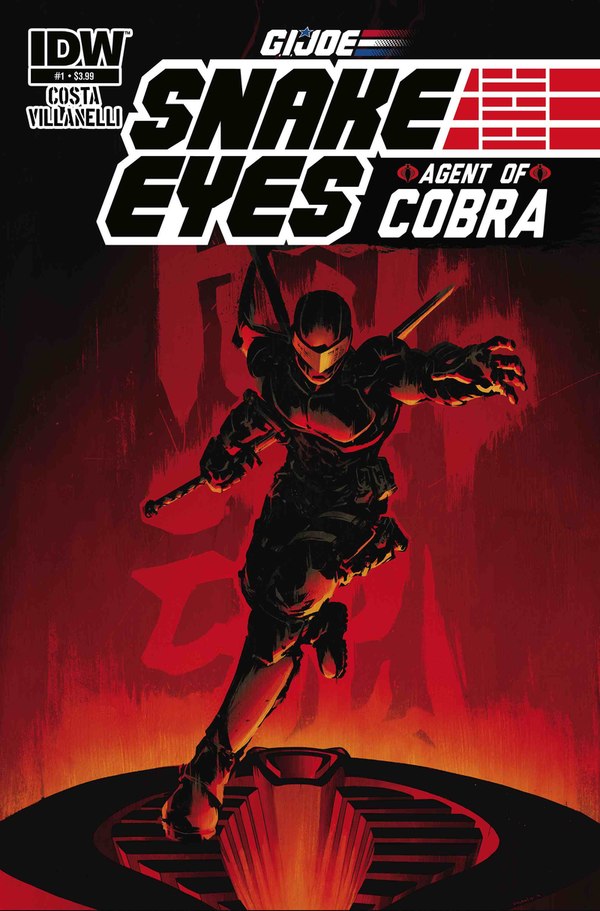