G.I. Joe Classified Wave 4 Is Now Wave 3 - So Will Wave 4 Be A Movie Wave And Does Zartan Change Colors?

GI Joe
by Jay Cochran
September 28, 2020
Since this weekend's PulseCon G.I. Joe Classified reveals for wave 3, more details have come to light about that wave.

The two remaining figures for wave 3 will be re-issues of the wave 1 Roadblock and Scarlett, who will join Zartan and the Cobra Trooper. Yes the two most commonly found figures from wave 1 will be returning for wave 3.

Now back in August, if you caught my video, I told folks this wave was coming, however originally these figures were slated for wave 4, not wave 3. You can listen to me talk about this back in August here starting at the 10:38 mark.

Now wave 3 based on the information I had gotten was originally going to be a movie wave featuring movie versions of Snake-Eyes, Storm Shadow and an unknown female character, which presumably was movie based. Of course the Snake-Eyes movie as we all know was delayed until October 2021, so even in August I assumed there was a good chance Hasbro might switch the waves around. Keep in mind Wave 3 isn't due out officially until around March 2021, which means wave 4 will be coming out much closer to the movie's new release date, assuming things aren't further delayed on that front. If I had to guess, that original wave three movie wave will now be released as wave 4.

As for other mysteries we have seen for this line, I don't have any new updates for you. This includes a Lady Jaye figure that was originally listed by an Australian retailer. I should note at this time, the only place I have seen indicating Lady Jaye is coming anytime soon, is that Australian retailer and Target. I've not been able to confirm that one from any other source at this time. Doesn't mean it's not coming, just means that I have nothing more for you on that one.

Another mystery that presented itself this weekend, was the indication that the Zartan figure will have a skin color change feature when put it in the sun, just like the original 80's version had. This was listed in the official solicitations sent our to retailers this weekend.

As I understand it however, this version of the figure does NOT actually have that feature, nor was it mentioned as a feature in the official presentation of it during PulseCon.

I find it hard to believe someone just pulled that feature out of thin air when they wrote up the official figure description for Zartan. I would say the figure either originally was going to have the feature and it was removed, or more likely there will be a second version released at some point that has that feature. Probably some kind of store exclusive. We did see a Zartan figure pop up in the Target system months ago. I would assume a figure with a color change feature would also include a chest plate with translucent plastic, like the original figure had to better show off the color change. If Hasbro really wanted to wow us, they would also include a Swamp Skier to go with the figure, assuming they do end up releasing a second one, but I won't hold my breath.

While we are on the subject of Target, other figures that have been found in their system this year include Lady Jaye, Flint, Major Bludd and Barbecue. Lets hope those don't all end up being Target store exclusives.

One final note. Wave 3 very likely will be fairly difficult to find at regular retail. You have fan favorite Zartan and a popular army builder Cobra Trooper figure mixed in with two figures that have already started warming pegs from wave 1. The likely hood that the large retail outlets will order this wave in large enough numbers to fill the demand for the two new figures, seems quit low.

However, small e-tailer and comic shops generally have the option of ordering single cases of figures they know will be in high demand. It can sometimes take longer for them to get those single cases in stock, but they will come. If you want to save yourself a lot of headache, time and gas, my recommendation is forgo trying to get these at the big box retailers, and just pre-order as many as you want at your favorite etailer like our sponsor BigBadToyStore.com. You could pre-order as many Cobra Troopers as you want an never have to worry about finding them again. Just a thought.
Image 1 of 5 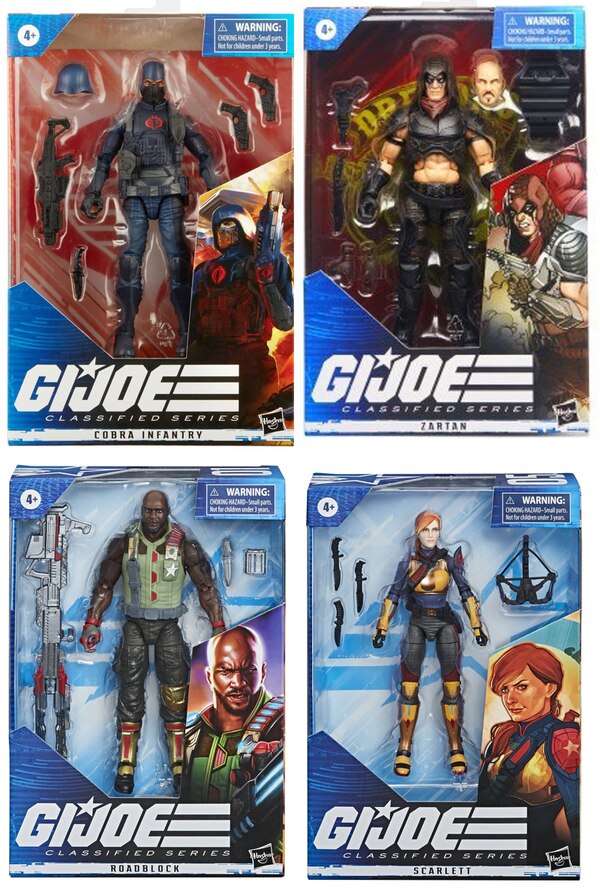 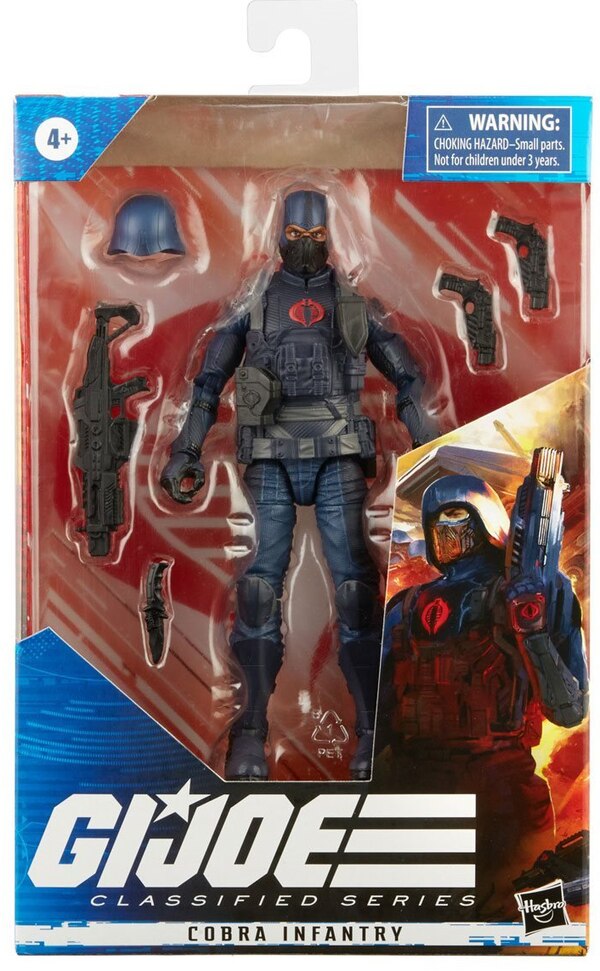 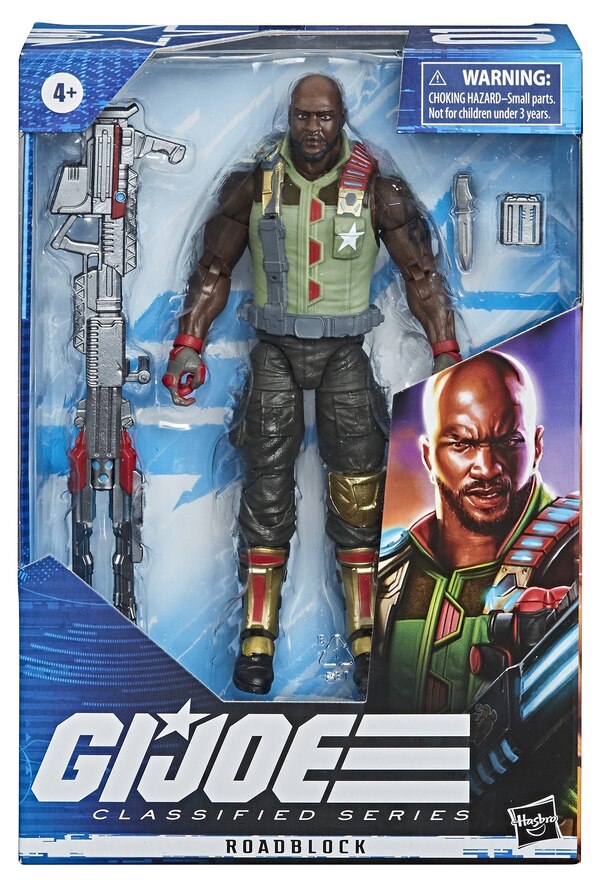 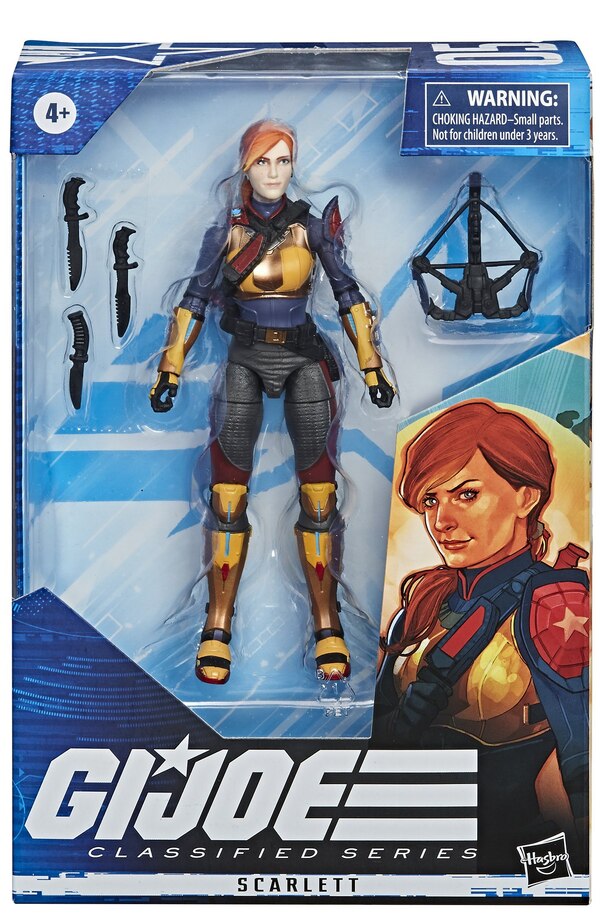 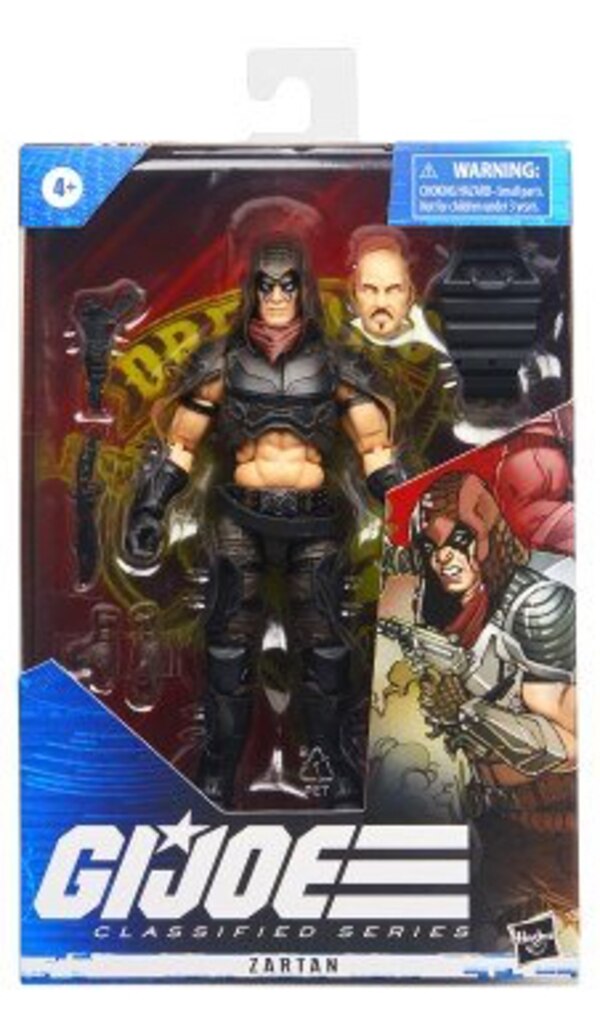 they already all came out, they just sold out instantly in 3 seconds, never to be found again

ha just kidding, apparently these are coming out around March.

Sweet, those action figures look awesome including the Scarlett action figure. I was thinking about getting the original but, I wait till this one comes out to get it or I might get both.

Do they still consider them "peg-warmers" if they don't even rate a peg? The only JCs I've seen at ANY Walmart were a couple of Roadblocks and a Scarlett laying in that weird space at the botton of the pegs. You know how at the bottom of the pegboard they have that shelf sticking out, then below that there's a little cubby hole, then the floor? The Joes were in that little cubby.

They should have just added a second "face mask" that's colored with the blue-hue for us to put on...

Well that's a shame. I was curious to see the color changing technology for myself

I might be slipping in my old age but why was Hasbro able to do a skin color changing figure back in the 80's but they can't do one now?

One thing that is getting me a little ticked off with Hasbro is they want to tease us by announcing new "G.I. Joe" figures, hyping them with making them either Walmart or Target exclusives and then pulling this crap when we want the good stuff.

If they can't do color change, they could always do a green skinned variant, although I'm not sure if that would sell well. I just wish they would change to color of his pants and hood to more burgandy type color instead of the brown that they are.

Apparently someone just grabbed a description of an old Zartan figure and used it for this new one, not bothering to read or confirm the features listed. I am not entirely sure why plastics and tools for such a feature aren't available now when they were clearly available back in the 80's, but I guess we will just have to take Hasbro's word on this and go with it's not happening.

Further proof that despite some great looking figures, the people handling this line don't seem to know what they are doing.

JayC - 2020-12-05 @ 9:50 pm
Back in September when the 6" G.I. Joe: Classified Zartan figure first went up for pre-order, the official solicitations for the figure listed it with a color change ability like the original 80's figure had. The copy read as followed:

Series Zartan figure features a color-changing effect when placed in ultraviolet light, turning from a pale skin tone to a bluish gray color

Now back then, we first reported to you that the this was a mistake and that at least the regular release version in wave 3 would not have color change properties. Still many including myself wondered if perhaps there was a second figure coming that would include the color change ability. Perhaps a store exclusive version or such.After all it seemed strange someone would have written up copy including a feature that never existed.Well according to the site Toy-Wizard, Hasbro recently held a small G.I.Joe Q&A round-table with a few fan-sites where someone asked them if a color change figure was coming. Hasbro's response was no. Apparently such a feature isn't possible with the plastics and tools at hand. Apparently someone just grabbed a description of an old Zartan figure and used it for this new one, not bothering to read or confirm the features listed. I am not entirely sure why plastics and tools for such a feature aren't available now when they were clearly available back in the 80's, but I guess we will just have to take Hasbro's word on this and go with it's not happening.The regular version of Zartan is currently available for pre-order at our sponsorBigBadToyStore.com and will be released next year.
Post Your Comment Now! (membership required)