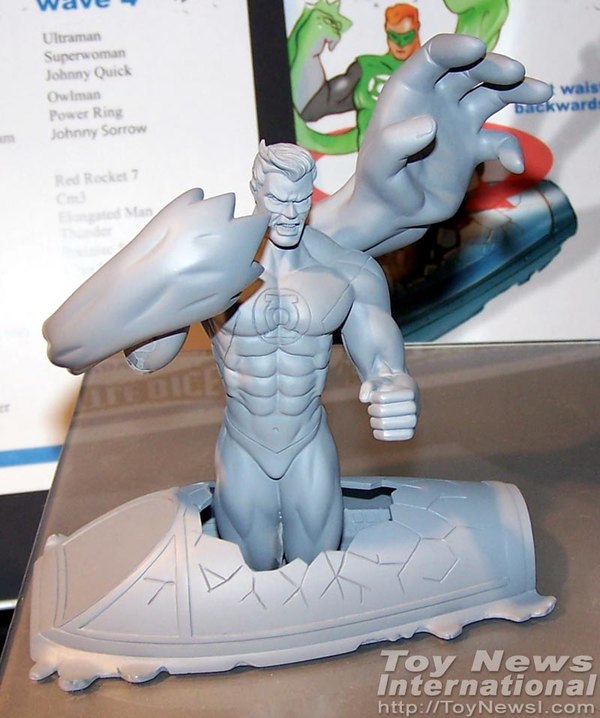 
With a roll of the dice, Playmates Toys adds a Super Hero twist to traditional game play with the introduction of Battle Dice at February’s American International Toy Fair. The comic book-inspired game integrates action figurines, featuring a wide selection of hugely popular DC Comics characters and “pop dice.” An array of DC Comics Battle Dice products will hit shelves this fall and the premium new line will feature more than 65 characters, including Superman, Batman, Green Lantern, The Joker and Wonder Woman, among many others. Using the powers of each hero or villain, players try to create an unstoppable army and
compete for the title of Battle Dice champ. The action figurines play an integral role in a player’s battle strength; with varying degrees of rarity, the characters allow for depth, interactivity and unlimited collectability.

“Battle Dice is a novel take on battling action figures that is made even more exciting by the universal appeal of DC Comics’ classic characters,” said Pat Linden, director of marketing for Playmates Toys. “This unique concept encourages imaginative play, as well as collecting, both of
which kids and DC Comics fans will love.” Mirroring the super-strength of the various comic book characters, Playmates will support the launch of Battle Dice with a mighty marketing campaign including national television and print advertising, an in-school program, comic and gaming conventions and a comprehensive public relations campaign.

Rolling The Dice – How To Play Battle Dice’s “pop dice” open to reveal themed, dynamically posed action figurines that make up six different armies. Each figurine has six different attributes including speed, strength, durability, intelligence, energy projection and fighting skills, plus symbols and numbers signifying additional powers and the strength of their power.

Players battle by loading their dice with action figurines, then rolling simultaneously with their opponents. The player with the lowest number selects the attribute to be used and the battle begins.

Each battle can involve one, two or many characters in a player’s army and victory depends on each character’s strengths versus those of the opposing forces, meaning figurines must be strategically selected before each battle. With every roll of the dice, the lives of players’ characters are at stake because defeat means surrendering the figurine to the opponent’s army. The first player to collect all of the opponents’ figurines wins the war and the game. Game extensions included in the instructions make the game more complex and intriguing.

• Booster Packs – Four series of booster packs will be launched throughout the year. The first booster series will have 60 randomly chosen figurines with varying degrees of rarity from each of the six different armies. Subsequent Booster Packs will consist of seven new figurines for each of the six armies, bringing the count to more than 190 characters by the end of the year. A chart is included to allow players to identify figurines collected in the series and the rarity of each figurine. Each booster pack also includes a collectible Battle Dice.

• Dice Launchers – Five-inch dioramas of characters have a mechanical feature capable of throwing one battle dice at a time and come with their own exclusive game play figurine and Battle Dice.

For images of Playmates's BattleDice shown at the 2006 International Toy Fair, Click here.