Miscellaneous
by Jay Cochran
March 19, 2020
BigBadToyStore.com has sent out their latest newsletter highlighting the latest arrivals and pre-orders. 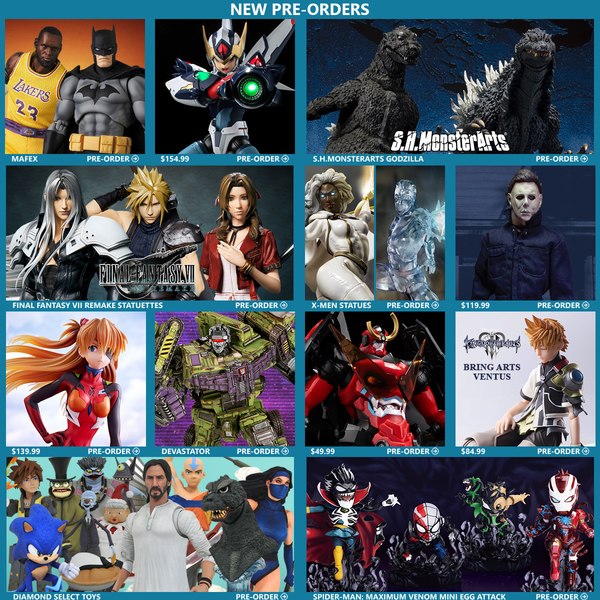 NEW PREORDERS
The ultimate crossover featuring Spawn and Mortal Kombat can be yours with McFarlane’s awesome action figure! Along with these two classic titles, Hiya Toys continues their 1/18 scale figure line with PX Previews Exclusives of RoboCop and Predator; Planet of the Apes also gets a shout-out from Mezco as Dr. Zaius joins the One:12 Collective series. Alongside other anime series, fans of My Hero Academia can grab figma Shoto Todoroki and Ochaco Uraraka figures, or pre-order ThreeZero’s Genos from season 2 of One-Punch Man in 1/6 scale. Don’t miss out on new 1/12 scale accessories, TBLeague figures, magnets featuring DC characters, new video game characters as D-Stage statues, and so much more—from DC Collectibles action figures and statues to Complex Movie Revo figures (and even an adorable DefoReal Godzilla!), there’s something for every kind of fan!

NEW ARRIVALS
Spider-Man, Rocketeer, and other classic Disney characters join the Select Series from Diamond! If you’re a fan of many titles, don’t forget to pick up the new Mega Construx Heroes featuring comic and video game characters. The Iron Giant has arrived in Battle Mode, alongside Super Saiyan 2 Vegeta as a Pop! figure, TBLeague’s takes on Sariah and Anubis in 1/6 scale forms, and of course DC Collectibes’ statues of iconic superheroes and villains.