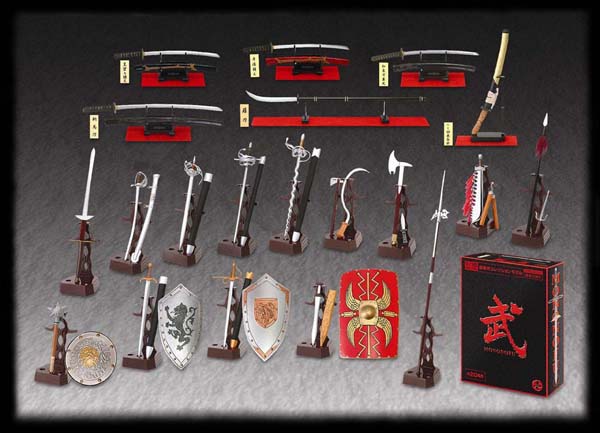 Borrowing the name from an ancient Japanese warrior group, Mononofu has created a unique and highly detailed line of collectors items dedicated to authentically in representing the orginal weapons of the past.

Available for the first time in the United States exclusively through Pleasent Angels USA Inc., series 1 is a 1/10 scale, 20 piece collection of miniature weapon replicas. To set them apart from standard collectable items they have been constructed using stainless steel die cast metal blades and resins. Each comes with its own stand for display. Not intended as toys, Mononofu is designed for collectors, ages 13 and up. They are the perfect size to be used as accessores with most action figures. There are also two limited edition weapons in this series.

This Japanese sword, usually having a curved single edge, is a made from a combination of soft iron and copper.
The combination of metals and design allows the sword to be used for both artistic expression and functionally as a fighting sword.

This Japanese Sword has evolved significantly over the centuries. The shape of the sword has been adapted to the changing fighting styles and folkways of the Japanese warrior. In ancient times, the sword came in two basic varieties: either a straight single-edge sword or a double-edge sword. The sword later evolved into a "Wantou," which featured a curved sword with less impact when striking. The reduced impact allowed warriors to strike and cut more efficiently, delivery more blows to an opponent with the same effort.

This is a favorite sword of Saisan Tsuchikara, the deputy director of "Shinsengumi" (master-less samurai formed for guarding a Kyoto shogun).

It is made 2 Shaku 8 Sun long (33.4 inches) and produced by Kanesada (the 11th in a line of apprentices dating back to the original maker). The sword is famous for the image of a single Japanese plum carved on its sword guard.

This extremely long, wide edged, and very heavy sword was strong enough to kill a war-horse in one swing. This sword was mainly used for fighting a horse-mounted warrior wielding a lance. However, because of its weight, only a few swordsman could wield it properly.

Japanese Steel Naginata:
The Naginata, famed weapon of the Sohei, or warrior monks, of medieval Japan was fearsome in the hands of a skilled combatant and is today of great importance in the martial arts field. 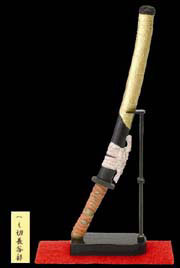 Japanese Steel Hesikirihasebe:
The Northern Dynasties and the Southern Dynasties, Japan
This sword, designated a National Japanese Treasure, is dictated to be 2 Shaku 1 Sun 4 Bu in length, which is 25.5 inches long.

It was originally crafted by Kunishige Hasebe, a Japanese sword craftsman in Yamashiro (now known as Kyoto). The sword was presented to military commander Hideyoshi (a unifier in Azuchi-Momoyama Era) by military commander Nobunaga (the first unifier of Japan in the Sengoku Era).

Twin Handed Sword:
13th – 16th century western Europe, this large sword for use with both hands exceeded 180cm, was carried on the back or side-saddle. 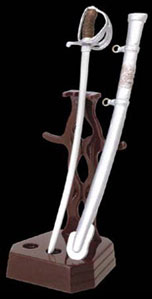 Sword and Sheith:
Renaissance-style Swept-Hilt Rapier traces its origin to early 17th century Europe, where swordplay with the Rapier was considered an essential part of a gentleman's education and was often used in resolving gentlemanly disagreements. Blades generally originated in one of the blademaking centers such as Toledo or Solingen, but many differences in styling and hilt materials resulted from the local manufacture of hilts all over Europe.

Rapier 1:
15th - 17 century (baroque rococo period), European (French). Originating from the word EPERAPIERE for the prickles. The blade is narrow with the traditional diamond cross-section. The steel bars provide a very attractive hilt design and the bone grip is wrapped with twisted wire borders by straight wire. The pommel counterbalances the blade superbly, giving it a feeling of speed and lightness.

Rapier 2:
16th - 17 century (baroque rococo period), European rapier is just the kind of weapon many duelists would have carried on the field of honor. The blade is narrow with the traditional diamond cross-section. The steel bars provide a very attractive hilt design and the bone grip is wrapped with twisted wire borders by straight wire. The pommel counterbalances the blade superbly, giving it a feeling of speed and lightness.

Shotel and Ax:
Etheopian, 17th - 19th century, the shotel was the traditional sword of the Abissinian (Ethiopia). The Purpose of this very awkward blade is to strike over or around the shield of an opponent.

Chinese Spear and Sai:
The spear is decorated with red dragon hair was used in China Mainland and is still widely used in the movie industry. The length varies with each user and has no standard length. The Sia is a weapon developed from farming tools and employed in the fighting system known as Kobudo, believed to have originated in Okinawa when farmers were not allowed to carry weapons. 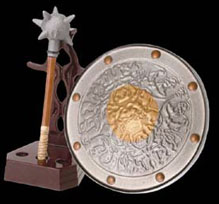 Mace and Round Shield:
13ht - 17th century, England, also called Morning Star, this was an affective weapon, even penetrating armor from its shear weight. 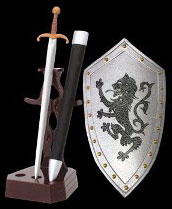 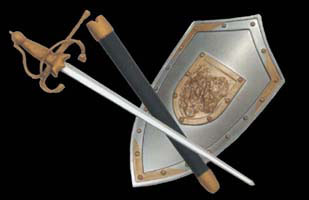 Long Sword 2:
German, 17th century Long Sword with sheath and Shield. Used by the emperors solders during the the war in witch the Protestants took action to the oppression of the Bohemian King Fredrick. 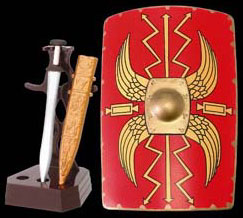 Gladius Sword, Sheath and Shield:
7 BC – 4th century, Roman generals sword and the Scutum, or shield, was the main form of body protection of the Roman soldiers. The shields large size allowed the soldiers to form a 'tustudo' or shield wall that could protect them during an advance.

Halberd:
Europe, 15th - 19th century, This Halberd spear was beautifully designed to be a combination of ax and spear in one, and was also used in ceremonies.