DC Comics
by Jay Cochran
March 06, 2009
On Friday, March 6, a feature film based on the acclaimed graphic novel Watchmen will be released in theaters nationwide. To help commemorate the movie’s release, Toys“R”Us stores are offering an exclusive, variant action figure from DC Direct based on the street vigilante, Rorschach.

The action figure, featuring Rorschach without his face…I mean mask…depicts a bruised Rorschach as he’s being booked in prison. The action figure will be released on Friday, March 6 and features multiple points of articulation, a grapple gun, an additional hand, a base and prison name plate (with his “real” name and prisoner number).

The Rorschach action figure will be available at Toys“R”Us stores nationwide for $16.99 and is recommended for children ages 14 and up. Check out an image of the figure below.
Image 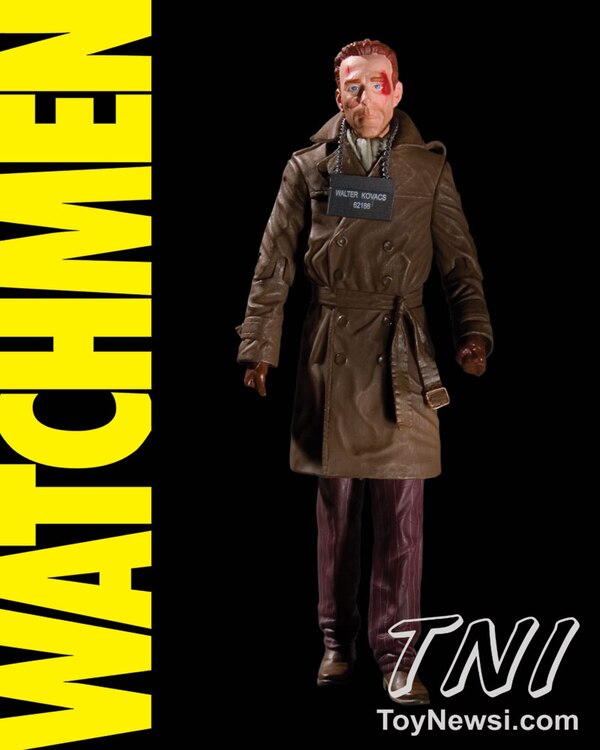 i got mine today. looked nice. I will keep it MOC since I have the regular one.

Nice sculpt on the unmasked head, wish it included the masked head though

no, i display loose and moc, but i consider "posing" to be playing. i just take them out and stand them with the rest of the corresponding line. having them in all kinds of crazy poses just doesn't do it for me. articulation just adds to the chances of it breaking in package and it takes away from the overall sculpt, it would make me happy to see them return to the 5 point (neck, arms, and legs) articulation.

That's a nice variant, I've seen it a few times at my local TRU, but the articulation is bad enough that I can't justify buying it.

I like it. I got it yesterday at Times Square TRU. It has a good likeness to the actor and has more value than the plain Previews exclusive version and if theres one variant thats worth it out of the young Comedian, clear Manhattan and unmasked Rorsarch Its for sure the unmasked Rorsarch.

I ordered nite owl and comedian at toysrus.com free shipping on all watchmen stuff

No free shipping on the Rorschach variant...

my friend told me that our local TRU got him in today. I am debating it since I already have rorschach and i wanna get silk spectre and ozy to round out the 6

I ordered nite owl and comedian at toysrus.com free shipping on all watchmen stuff