DC Comics
by Jay Cochran
November 01, 2011
Warner Bros. today released a press release officially announcing that they have come to an agreement to extend the DC Comics master toy license to Mattel. The terms of the extension were not revealed in the press release but it will for at least another two years since the release says that Mattel will be doing toys for both the Dark Knight Rises movie which comes out next year and the new Superman movie which comes out in 2013. The press release also goes on to mention that Mattel has struck a deal with Diamond Distributors to help extend its presence globally with exclusive European distribution rights for the DC Comics 6" action figure line. See the entire press release below:

Warner Bros. Consumer Products (WBCP), with DC Entertainment, announced today that it has extended its successful relationship with leading worldwide toy manufacturer, Mattel, Inc. The new multi-year agreement allows Mattel to continue as master toy licensee for the complete universe of DC Comics characters. Under the terms of this strategic alliance, Mattel is granted unprecedented access to the complete breadth and scope of the DC Comics vault of characters, which includes more than a thousand world-famous DC Comics Super Heroes and DC Comics Super Villains, such as Superman, Batman, Green Lantern, Wonder Woman and The Joker. Further, the agreement includes popular characters such as The Flash, Aquaman, Shazam!, Green Arrow and Hawkman.

“We have developed an incredibly successful partnership with Mattel and we are very excited about taking the relationship to new levels,” said Brad Globe, President, Warner Bros. Consumer Products. “Warner Bros. and DC Entertainment have an unrivaled slate of content support across all key platforms essential to our global consumer products business which is anchored by our alliance with Mattel.” 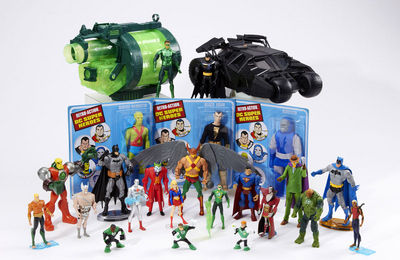 “The DC Comics Super Heroes enjoy a worldwide fan base that keeps the demand high for consistently imaginative new product,” said Karen McTier, Executive Vice President, Domestic Licensing and Worldwide Marketing at Warner Bros. Consumer Products. “The extension of the Mattel agreement ensures that these fans will continue to be amazed by our DC Comics Super Hero offerings for many years to come.”

As part of the ongoing relationship, Mattel is set to develop toy lines for two of Warner Bros.’ most highly anticipated theatrical releases: on July 20, 2012, The Dark Knight Rises, and on June 14, 2013, Man of Steel. Future television-based collaborations include Warner Bros. Animation’s upcoming television series, Green Lantern: The Animated Series, along with their ongoing product support for Young Justice, also from Warner Bros. Animation. Both animated series are exclusive to Cartoon Network and will be the tentpole programming for “DC Nation,” the new multiplatform, branded block of original programming and exclusive content, featuring DC Comics’ library of legendary character properties, which will debut in 2012. A special Green Lantern: The Animated Series hour-long movie event airs Friday, November 11 at 7 p.m. on Cartoon Network. In addition to the rights to existing DC Comics characters, animation and motion pictures, the extension includes Mattel’s rights to produce toys based on future DC Comics films and animation projects that are developed and produced during the term of the agreement.

"Mattel has been a longtime, valuable partner to the DC Comics creative team,” stated Diane Nelson, President of DC Entertainment. “We look forward to working with Mattel and the Warner Bros. Consumer Products team to bring new DC Comics Super Hero toys to life for our fans around the world.”

Mattel supports the universe of DC Comics characters across all of its portfolio of core brands, including Hot Wheels®, Matchbox®, Barbie®, Mattel Games and Fisher-Price®, where the DC Super Friends products featuring the Imaginext®, Shake ‘n Go®, GeoTrax® and HeroWorld™ lines have introduced the DC Comics characters to an increasingly vast audience. The addition of the new Little People® product line that features DC Comics characters will expand consumer appeal even further. Mattel continues to bring the talents of its world-class sculptors, designers and developers to create product lines that target kids, collectors and pop culture enthusiasts. In combination with their deep knowledge of kids and expertise in kid-targeted marketing, product and content development, Mattel has developed DC Comics Super Heroes sections in the toy aisle designed to attract a new generation of kids to the universe of DC Comics characters for the first time, while fueling the flames of collectors’ and fans’ passion for these popular characters. In 2012, Mattel will partner with Diamond Comic Distributors to help extend its presence globally with exclusive European distribution rights for the DC Comics 6" action figure line. With the broad scope of category rights granted, Mattel is uniquely positioned to leverage this rich portfolio across many different categories.

“We are thrilled to further our long-standing partnership with Warner Bros. Consumer Products and support the extensive DC Comics portfolio’s franchise development,” said Tim Kilpin, Executive Vice President of Mattel Brands. “The DC Comics characters are rich in story and we look forward to bringing these popular characters to life through innovative product design.”

During its 10-year relationship with Warner Bros. Consumer Products, Mattel has created and delivered a number of successful toy lines that bring the fun, action-packed heroism and excitement of DC Comics’ characters to life, including top-of-the-line action figures, vehicles and role play accessories across all DC Comics brands, including the 2005 release of Batman Begins, the 2008 release of The Dark Knight and the 2011 release of Green Lantern, along with a collection of heroes and villains from the popular animated series Batman: The Brave and The Bold and Young Justice, as well as the Batman and Superman family of DC Comics Super Heroes action figure lines.
Image 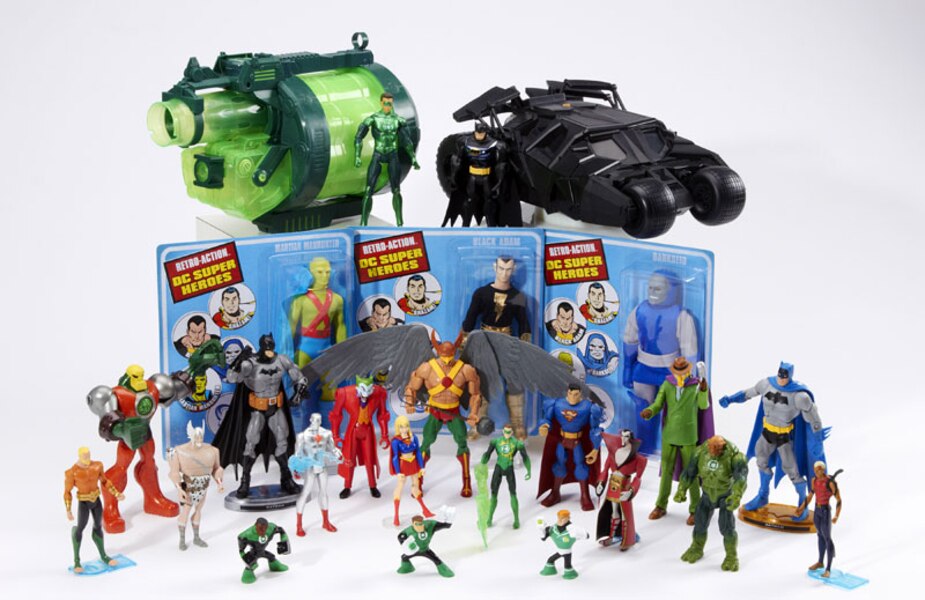