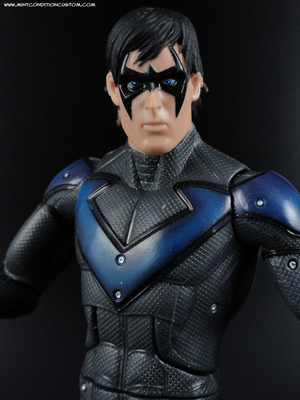 Today we bring you a guest review of Mattel's new Batman Legacy Nightwing (Arkham City) figure by John Harmon from Mint Condition Customs. You can check out hi-res images for the figure below in our GALLERY!

PACKAGING – I like the Batman Legacy packaging. The shaping is unique, which catches your attention. The box art is nice, with a shot of Batman from the Arkham City game, and a really nice photo of the Nightwing figure on the side and on the back of the packaging. His name is also in big bold letters on the front, which helps identify the figure for those not as well versed in Batman. 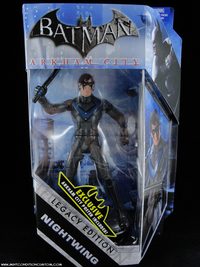 There also isn’t too much negative space in the packaging, like I’ve seen with several action figures before. It seems to appropriately fit the figure and accessories, without looking like a bunch of paper and plastic was wasted on it.

SCULPT – First of all, let me start by saying how amazed I am at the level of detail in the sculpt. I don’t mean to be a nitpicker about Mattel, but seeing as how 90% of their DC Universe Classics figures used buck bodies with minimal sculpted detail, I’m shocked at how much detail is in this sculpt (and subsequently all of Mattel’s Arkham City offerings). It seems to be a near perfect (if not perfect) translation of the game render, with the entire suit being textured in some way, and lots of piping and outlining of the muscle areas. The Nightwing symbol on his chest, that extends onto his arms is raised with piped edges, and there are lots of rivets all over the suit. I don’t know if Mattel had to use 3D printing to get that kind of perfect texturing or if it was sculpted by hand, but it looks amazing. 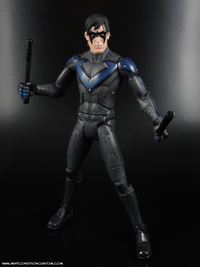 His head sculpt, on the other hand, is less than amazing. While it’s pretty close to the game render, it’s not perfect. His jawline is off, and overall the head seems too large, especially in comparison to the other figures in the line (I’ve showcased this in the photos below). These problems just make the head seem…off. The hair sculpt is great, but that’s about it for the compliments on the head here.


PAINT – There’s a nice mix of paints here. Most of the suit is smokey gray (it looks like this is the color most of the figure was molded in), but all the piping is either dark gray or gloss black. All the rivets are detailed, and there’s some fantastic paint on the Nightwing symbol. It’s a vibrant blue in the middle, on the edges it fades darker and darker to black. It gives it almost a glowing feel, and I really dig it. 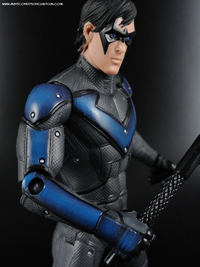 The only problem I have with the paint here is, once again, with the head. He has some hair, just behind his right ear that is left unpainted so it appears flesh tone. Makes him look like he’s got a growth coming out of his ear or something. Also, there are just a couple of tiny black paint marks on his right cheek that refuse to come off. Thankfully it’s not noticeable unless you’re looking up close, but it is annoying once you notice it. Other than that, the paint is good on this figure. No bleeding or sloppy edges. Very solid.


ARTICULATION – Nightwing’s articulation is sort of a mixed bag, that only Mattel can do it seems. He has plenty of articulation points, but they’re not all very useful. He has a ball jointed neck (works mostly as a side to side cut joint though), ball jointed shoulders, bicep rotators, single elbows, cut wrists, ab crunch, waist swivel, t-hinge hip joints, thigh rotators, single knees, and up and down ankle joints. None of the joints are stuck or gummy, and it’s the usual amount of articulation Mattel gives their figures (it would still be nice to get double elbows and knees, but I don’t think Mattel is ever going to give us that as a standard), but as I said before, they don’t all work that great. His knee joints don’t bend very far, and his ab crunch barely works at all. He can arch his back pretty far, but he can’t bend forward far at all. So much so, that anytime I get a figure like this I wonder what the point was of giving him the joint in the first place. I guess they just figured it would be hard to move while wearing a mattress over your entire body. That, or it’s a design flaw. 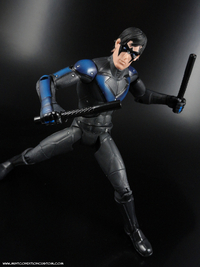 It might be possible that if you crack him open you can make him bend forward farther, but he was so hard to find that I’m not ready to try that just yet. If any customizers out there do try it, let me know!


ACCESSORIES – Nightwing comes with two nightsticks, that at first glance seem to be recasts of the ones that came with the DC Universe Classics Nightwing, only cast in black. But after looking them over, it seems they are thicker than the DCUC versions, by a slight margin. It’s weird, and could just be an anomaly in the molding process, but they are a bit thicker. At any rate, they look great and are very appropriate for the Nightwing character. No painting is applied to them though.

He also comes with a figure stand that says “Nightwing” on it, and a mini poster featuring some promotional art from the Arkham City game. I would have taken a picture of it, but I couldn’t get it to straighten out (it’s rolled up tight in the packaging), but this is what the poster looks like. 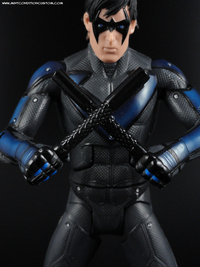 Nightwing is actually the first Mattel Arkham City figure to come any accessory at all, which is nice. The figure stand and poster are cute I suppose, but they could have exchanged those for more accessories.


FUN – If you love Batman, you’ll think this figure is fun. It’s not only one of the coolest Batman characters ever, but the figure is based on the best Batman game ever made. Any kid seeing this in a toy aisle would immediately recognize the huge Batman Arkham City logo and think this was a cool character. His slightly limited articulation does hinder the fun for me, since most of the fun of a figure to me is getting to put it in crazy poses, but it’s still a pretty fun figure.

OVERALL – Nightwing is a pretty good figure. While his articulation is somewhat limited, and his head sculpt is off, he’s still an integral Batman character. If you have the other Mattel Arkham City figures, you’ll want Nightwing just to give Batman another ally against his rogues. 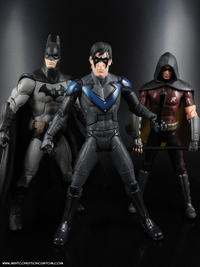 Even if you don’t have the other figures, Nightwing is good on his own. His body sculpt looks fantastic, and you can get him into some pretty cool poses, regardless of the articulation issues. 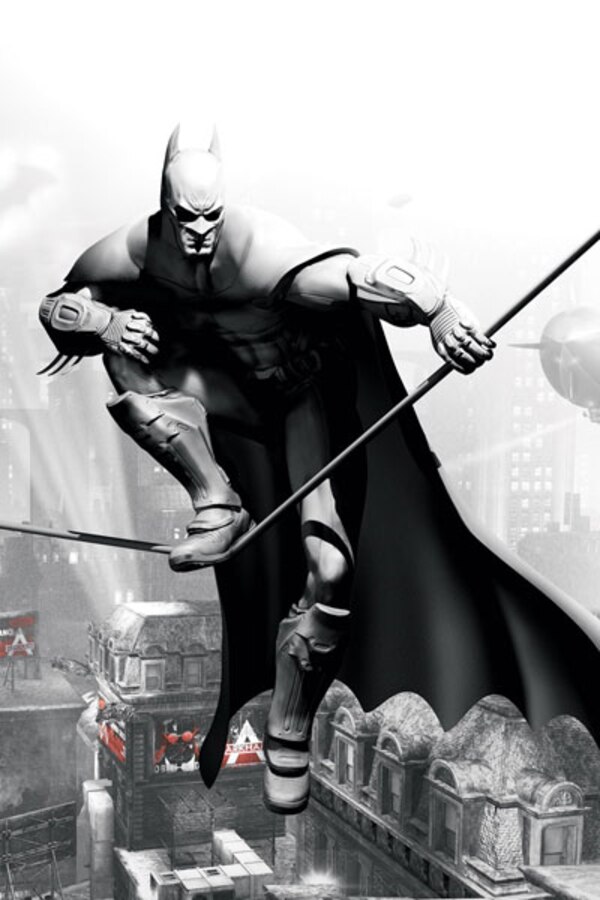 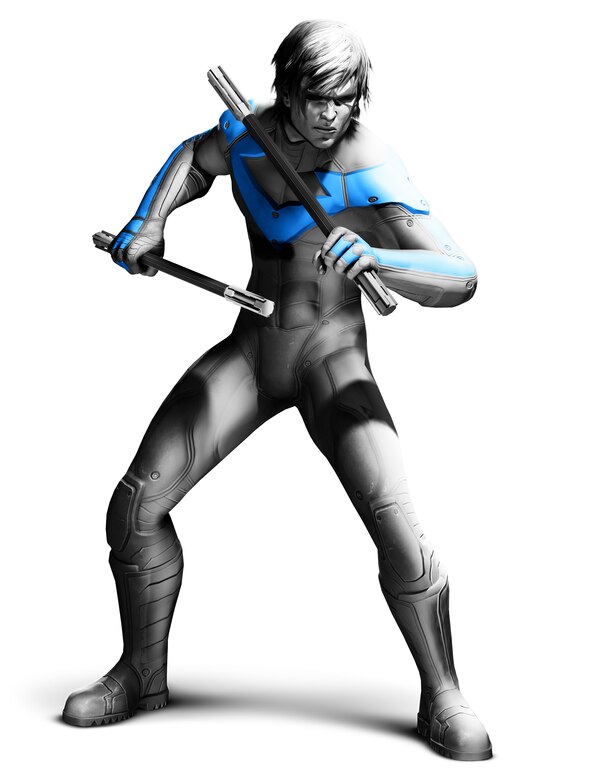 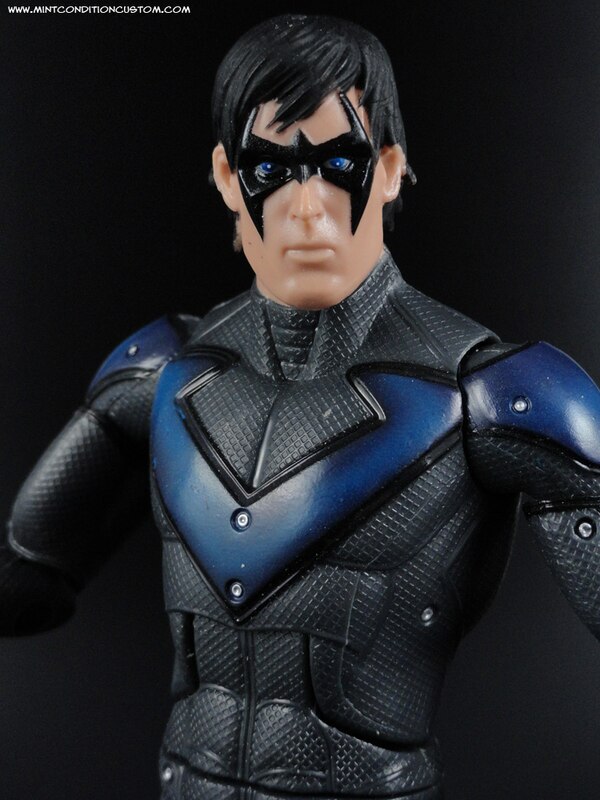 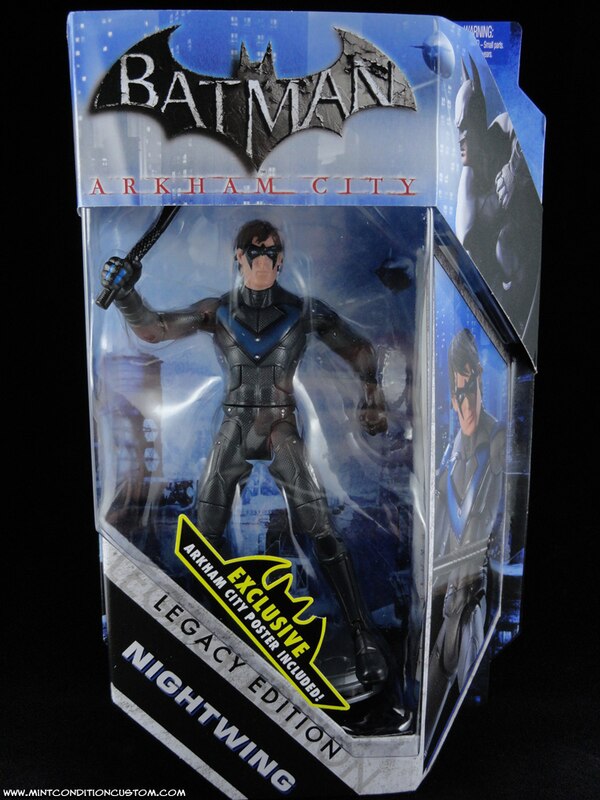 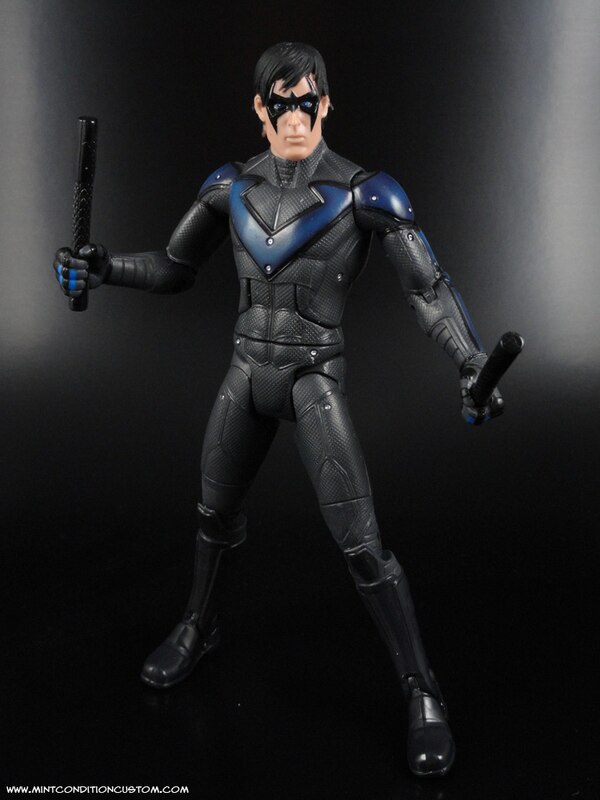 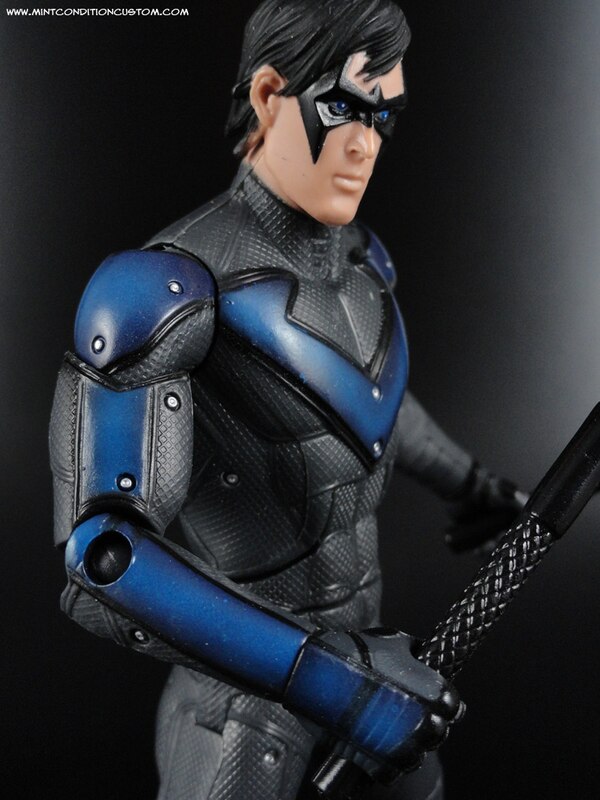 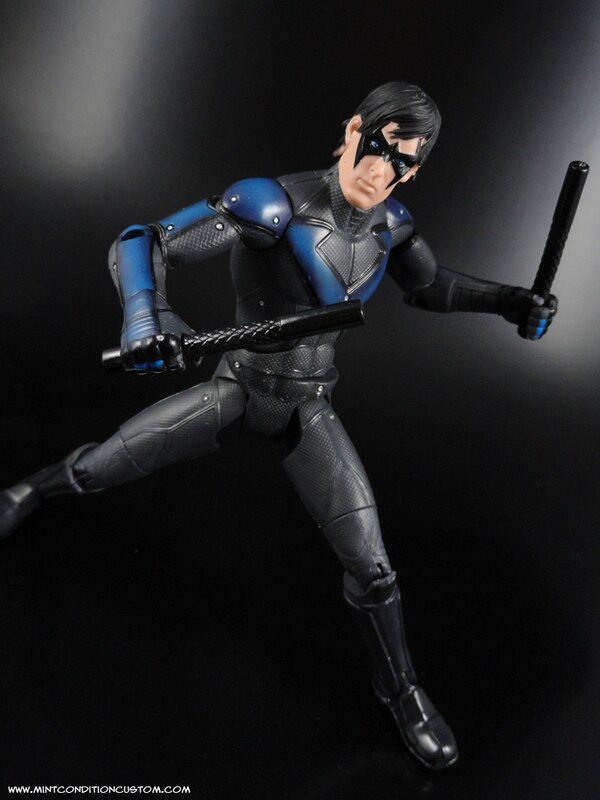 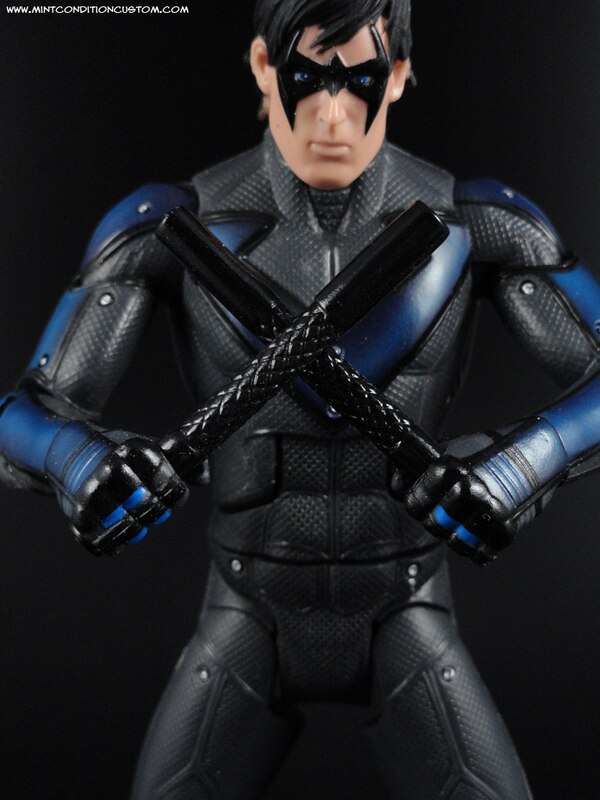 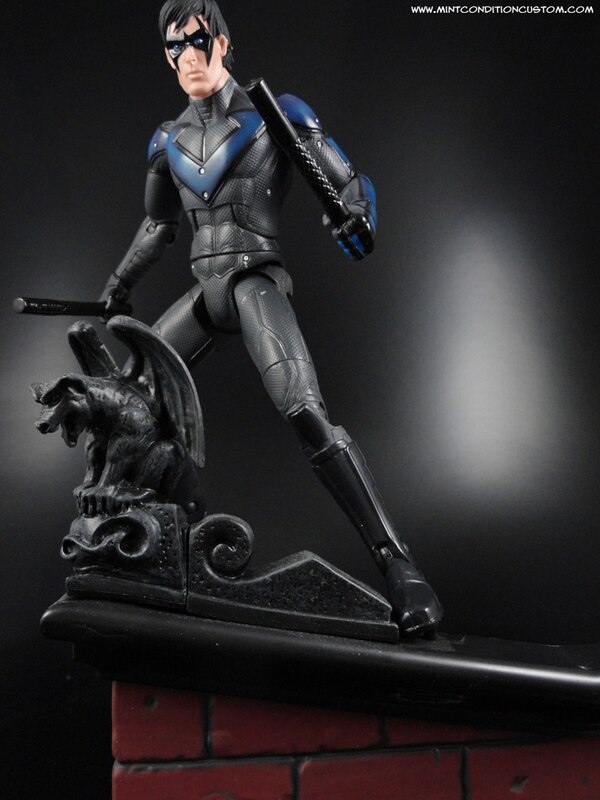 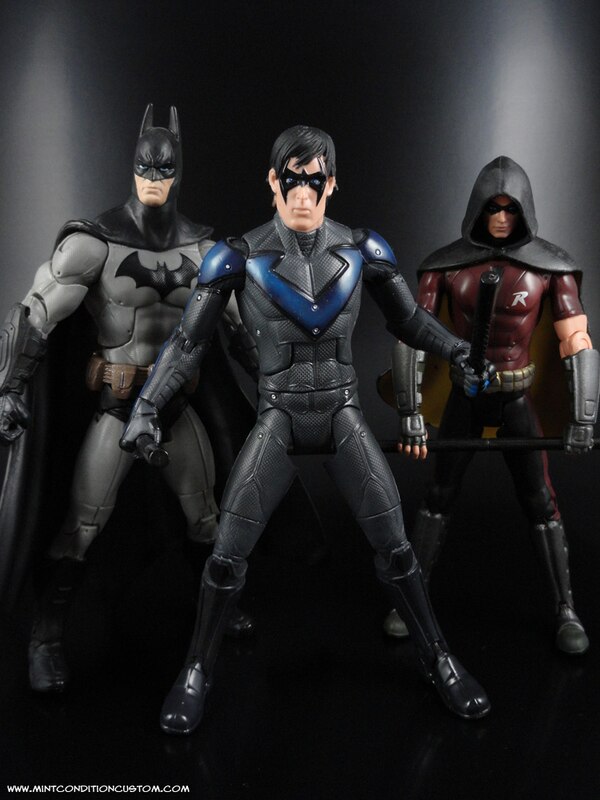