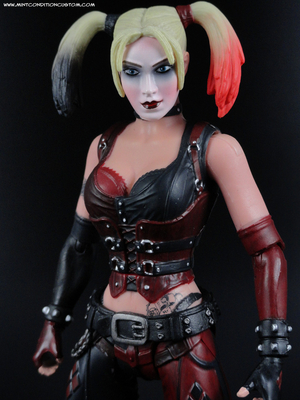 Today we bring you a guest review of Mattel's new Batman Legacy Harley Quinn (Arkham City) figure by John Harmon from Mint Condition Customs. You can check out hi-res images for the figure below in our GALLERY!

Harley is the Yin to the Joker’s Yang. Or possibly, they’re both Yang which is why they almost never get along (also they’re not very nice people).

Harley was created for the Batman Animated Series back in 1992 by Paul Dini. They wanted a female henchman to give to the Joker, and she was only ever meant to be in one episode, but she was so well received they made her a recurring character and eventually Joker’s girlfriend. She’s now considered an integral part of the Batman rogues gallery, and has firmly planted herself into the DC Comics mythos.

She’s usually depicted in a red and black patterned body suit, with a harlequin hat and white face makeup. In the Arkham City video game, they um…they changed that. Here, she still sports the white face paint, but instead of a harlequin hat she has two pigtails, the ends of which are died black and red, and she’s dressed like any random girl found at a goth club. 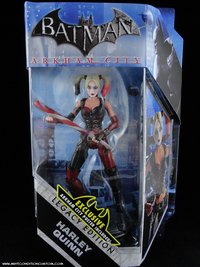 The Arkham City designs were meant to be grittier, and if possible more realistic. You wouldn’t see someone running around in a body suit all day, but with this outfit you just might. Regardless it was a bold move on Rocksteady’s part to design her like this.

I think the design is great myself, but did Mattel do a good job of translating that design to plastic? Read on to find out!

PACKAGING – Her packaging is in the same style as Nightwing from before, so I won’t spend a lot of time repeating my thoughts on it, but suffice it to say I like it. It’s eye catching, has a unique shape, and there’s not a lot of wasted space inside.


SCULPT – Harley Quinn’s sculpt is phenomenal. This without a doubt the best female figure I’ve ever seen Mattel make, and easily one of the best female figures I’ve ever seen period. All the proportions are right, all the fine sculpted detail is just beautiful (such as the buckles, straps, and all the wrinkles in her clothing), and her head sculpt is fantastic. She has just the faintest hint of a smirk, just enough to let you know she’s cooking up something devious, but she won’t tell you what it is until it hits you. 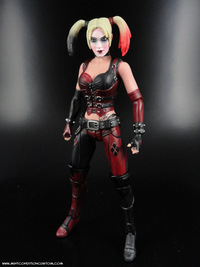 Her face isn’t 100% perfect when compared to her game render, but every other part of the figure does, and I actually think her face here in this figure is better. I’ve read that the Four Horsemen actually sculpted this one, and if it’s true than I’m even more impressed with what they can do.

This figure is just beautiful. You can even see the straps of her thong on her hips, just above the belt. That fine attention to detail is astounding. And I’m actually surprised that this figure is being marketed to kids. Yes it’s a Batman character, based on a very popular video game, but still…she’s very provocative to say the least. And she has a perfect sculpt.


PAINT – This is another area this figure just excels in. Her pig tails actually look dyed on the ends, with the wonderful fading into her natural hair color. There is not a single bit of paint slop or messy edges. Not only that, but there’s actually shading and lighting in the paint detail. Just look at her pants or her corset, and you’ll see what I mean. The paint on her is almost statue quality, even her eyes have great detail in them. 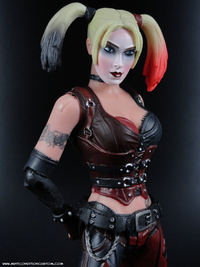 And her tattoos are flawless. I know the process for putting tattoos onto figures is akin to screen printing, so it’s not impossible to get them to look perfect, but given that they had to go off of the game renders, these tattoos look amazing. From what I can tell of the game render, these tattoos look exactly like them. I think they had more color in the game, but I’m not worried about it. Just look at the one on her left hip and you’ll see the kind of detail they got into it. You can see the Joker’s face clear as day. Can you tell I like this figure yet?


ARTICULATION – Now, this is one area where the figure is kind of lacking, but honestly not by much. She has a ball jointed neck, ball jointed shoulders, swivel-hinge elbow joints, cut wrists, a cut waist joint, t-hinge hips, thigh rotators where the top of the boots are, swivel hinged knees, and back and forth ankle joints.

She actually has a lot more articulation than the standard Mattel female figure, and some different articulation too (the swivel-hinged elbows and knees are new territory. You usually only see those on Hasbro figures), however some of it is restricted. Her elbow joints don’t get too large a range of motion, and neither do her knees. Her hips don’t go up very far, and her left hip is really gummy and doesn’t stay up. Hopefully this is an isolated incident. Everything else seems to work great. 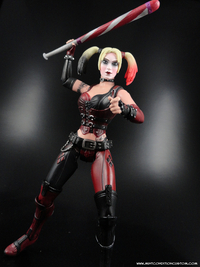 With the combination of her thigh rotators and swivel hinged knees, you can get some good poses out of her legs, and almost give the illusion she has rocker ankles (almost). I don’t mind the lack of ab crunch, seeing as how I doubt anyone would be able to crunch their abs in that corset.

Oh and, just to let you all know, her pig tails are not posable. I thought they were, given how the picture of her on the back of the box shows her holding the bat behind her neck with her pig tails posed out of the way, but they aren’t. I almost tore them off testing it, but they are emphatically not posable.


ACCESSORIES – Harley comes with her candy striped baseball bat, a figure stand, and a mini poster, seen here (but without the text over it). Her bat is a very proper accessory, given that she used it quite a bit in the game. It’s got some good sculpted detail, and is nicely painted. Maybe some old looking blood stains would have looked nice, but that’s neither here nor there. It looks good as is. 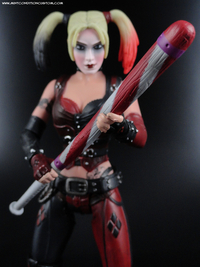 Once again, I think the figure stand and poster are neat ideas, but I would rather have had those traded out for more accessories (perhaps some guns for Harley?), or even a collect and connect figure, specifically for the Arkham City figures (Killer Croc or Solomon Grundy anyone?). I suppose we’re lucky she even came with one accessory though, given how few figures come with accessories in this line.


FUN – Harley is a ton of fun. She’s a popular Batman character. She’s the Joker’s girlfriend. She’s cute, she’s psychotic, and she’s dressed like she’s going to a Razed in Black concert. She’s plenty posable, and looks great going toe to toe with Batman, or snuggled up next to her Mr. J. 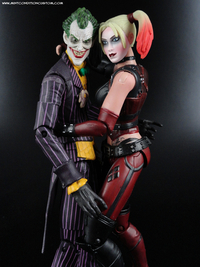 OVERALL – I think you know by now what I think. Harley is a fantastic figure. What few articulation issues she has I feel is overpowered by everything else that makes this figure amazing. The sculpt is perfect, the paint is perfect, and she’s a ton of fun.

She looks great with other Mattel Arkham City figures, and even looks great next to the DC Direct Arkham Asylum figures (just look at her with the DC Direct Joker in the last photo). You won’d be disappointed if you pick this figure up. She’ll make a great addition to your Batman collection. 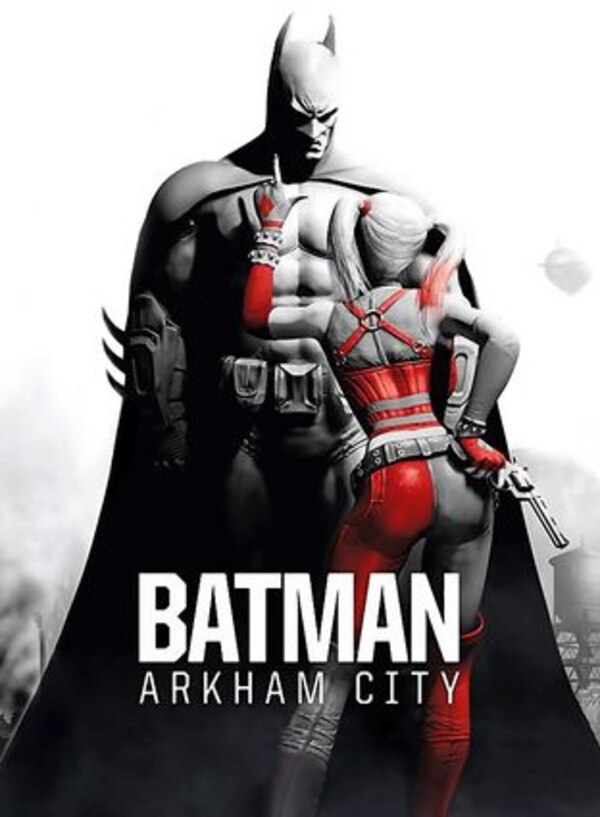 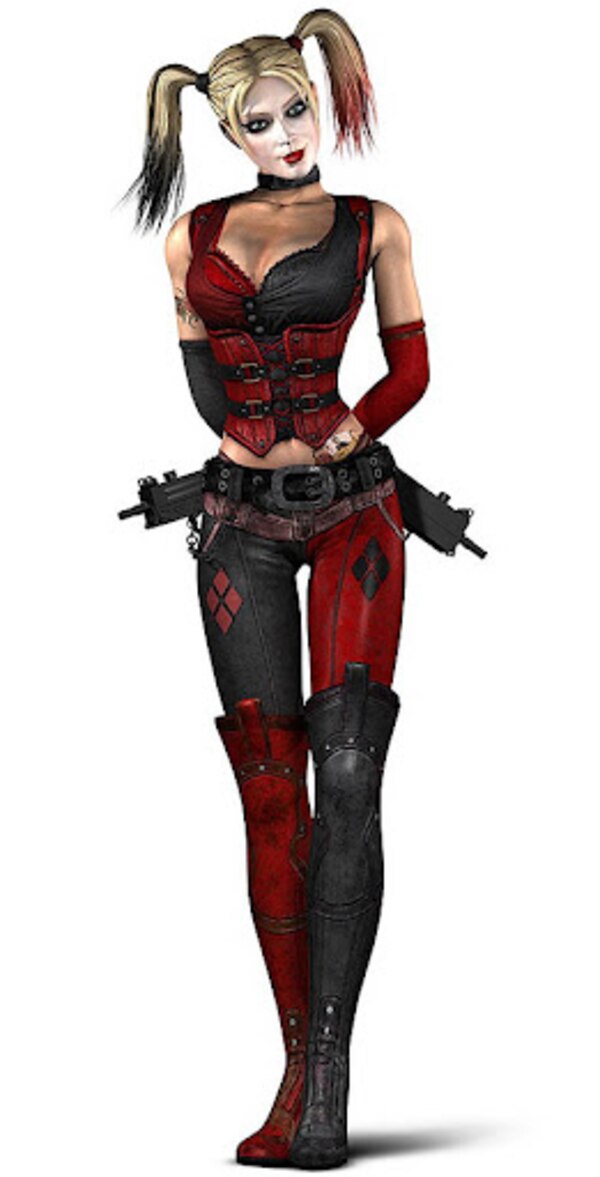 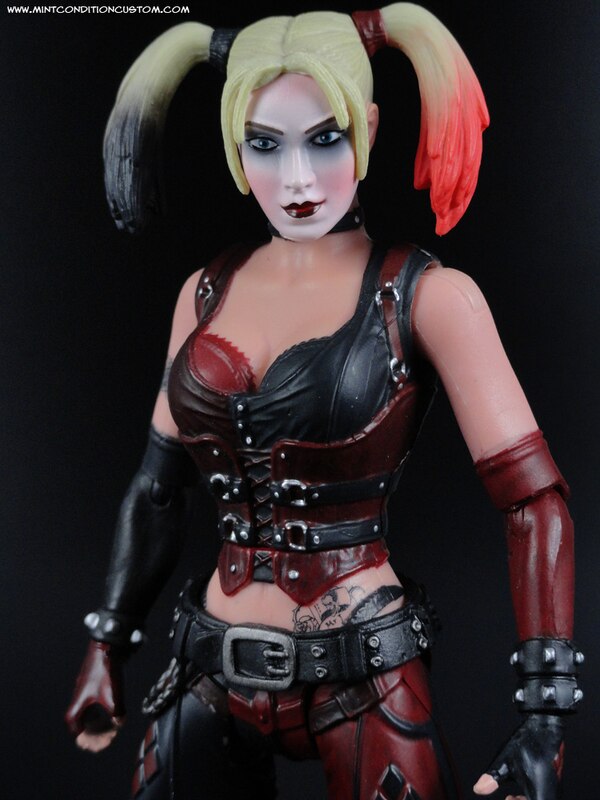 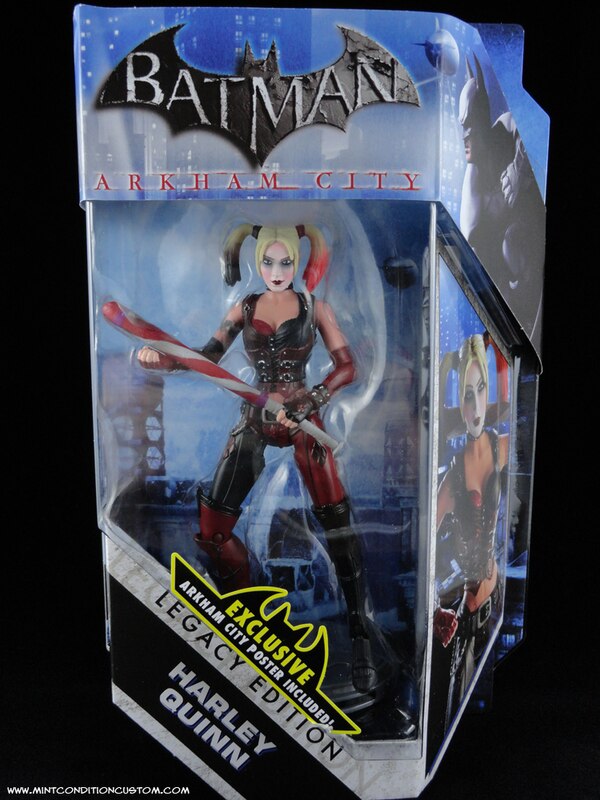 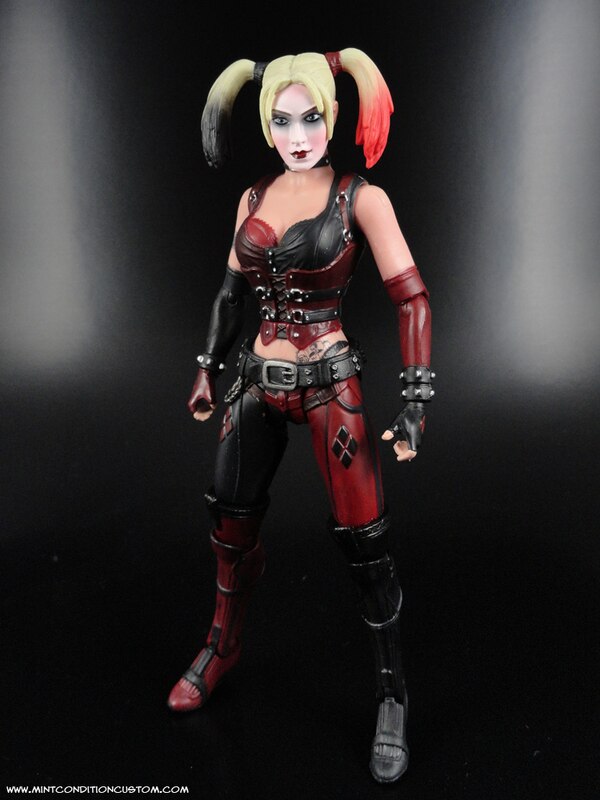 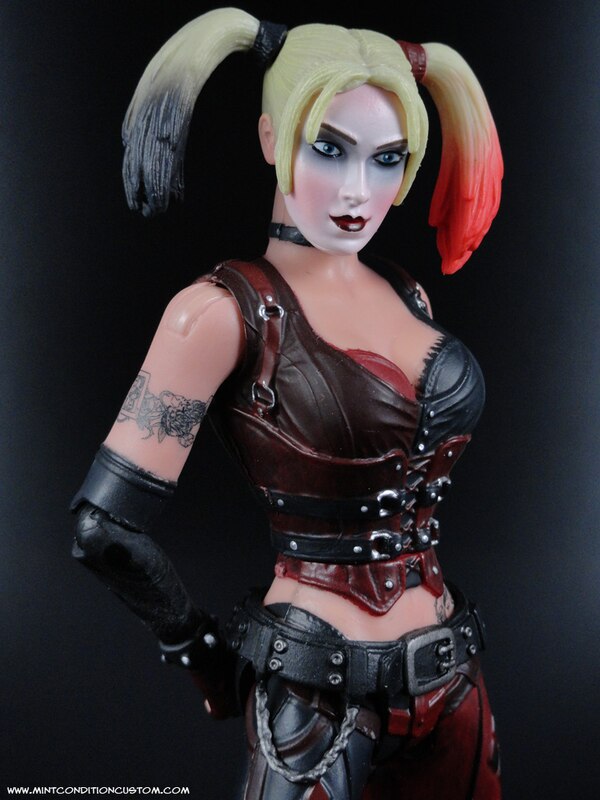 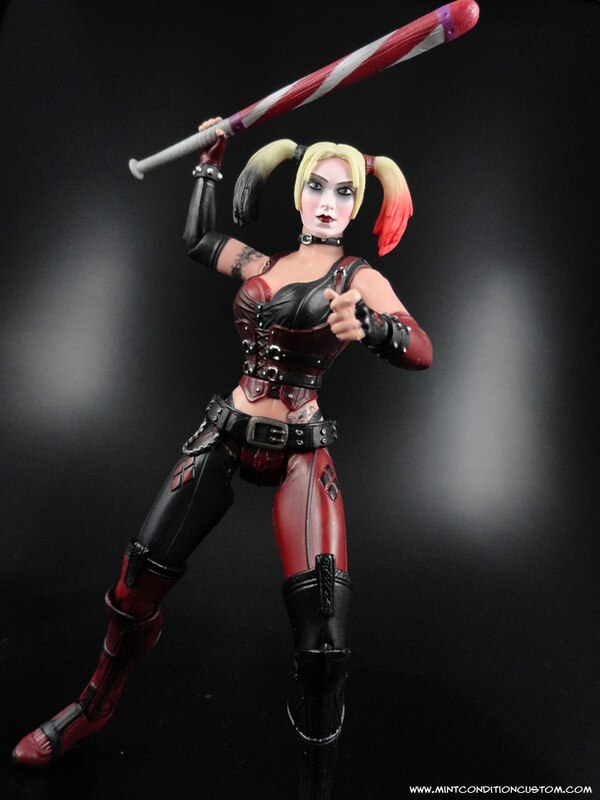 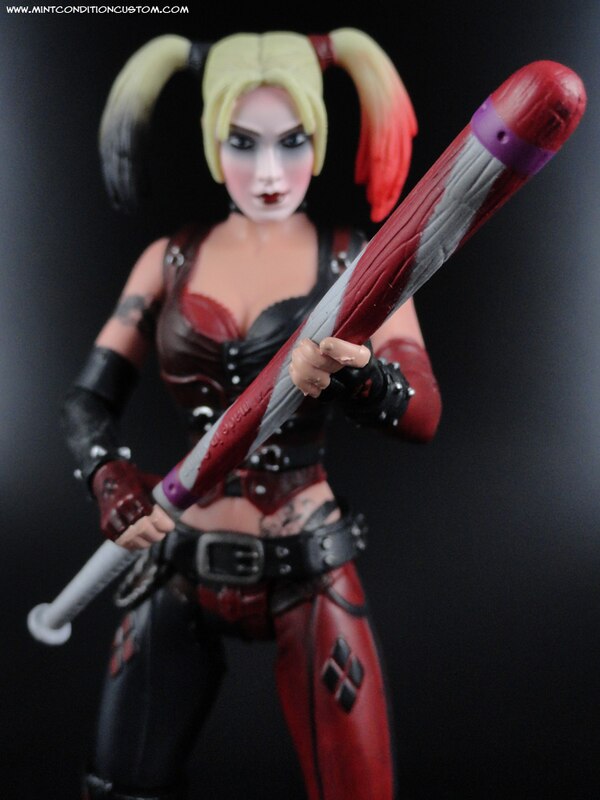 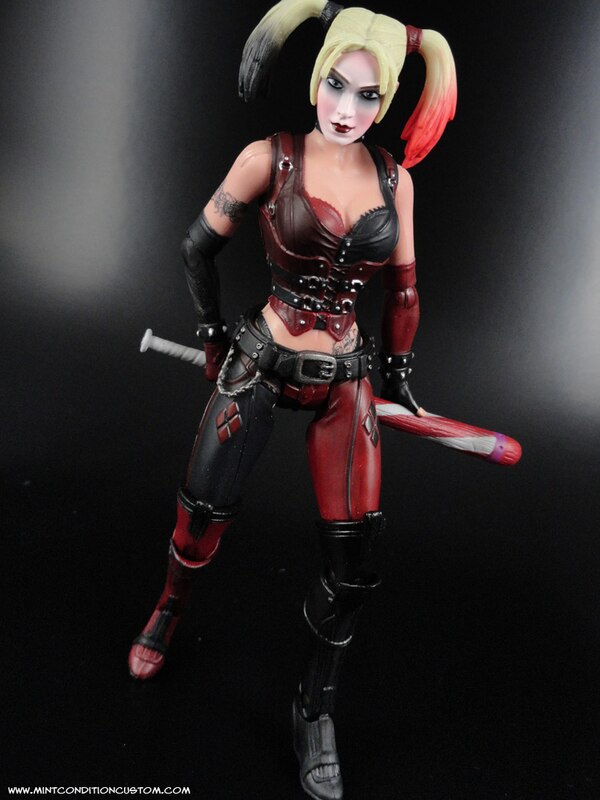 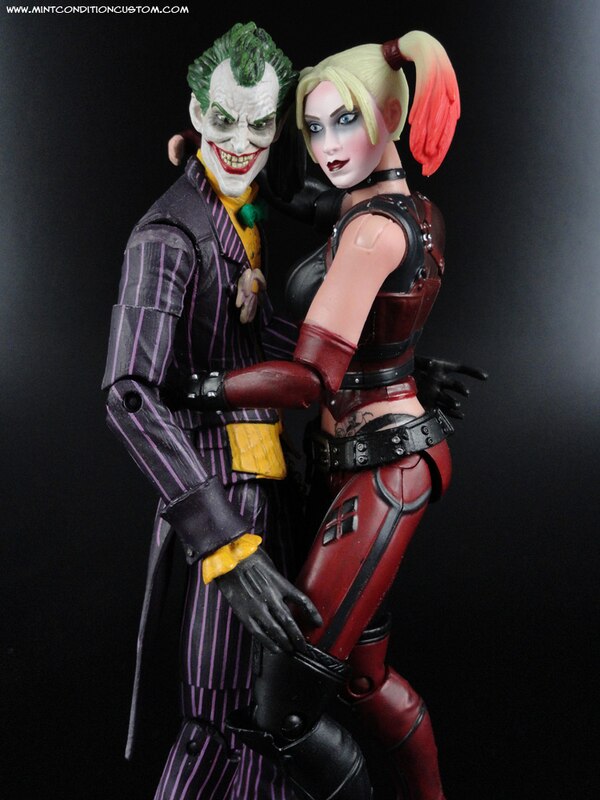