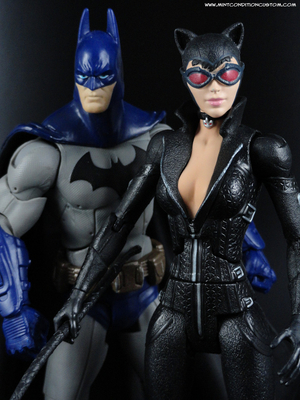 Today we bring you a guest review of Mattel's new Batman Legacy Batman/Catwoman (Arkham City) figure 2-pack by John Harmon from Mint Condition Customs. You can check out hi-res images for the figure below in our GALLERY!

This Batman Week concludes today with a look at the Mattel Batman Legacy 2 pack of Arkham City Batman and Catwoman.

Catwoman seems to be one of those characters fans are always wanting. She’s been around since the very first issue of Batman’s own title in 1940, and has maintained popularity ever since.

She’s gone through many outfit changes over the years, some that seemed to be more practical than others, but they always maintained some sort of sex appeal. Not surprising, considering Catwoman is a character who loves to use her sex appeal to get what she wants and to distract her enemies as she pummels them.

Catwoman represents that side of femininity that often makes men uncomfortable. She’s strong, independent, and she knows what she wants and how to get it. She’s not afraid to use anyone or anything to get what she wants. She challenges every conception men may have about women and the “damsel in distress”. These days, this character type is not very original. We see the strong female characters all the time in T.V. and movies, and in comic books. However, back in the 40′s this was unheard of, and for a character like this to persist for more than 60 years in a male dominated industry I think is a testament to her character.

The choice to not only include Catwoman in Arkham City, but to make her a playable character was certainly a good call on the part of Rocksteady. Their design for Catwoman is more or less just a more realistic looking and textured version of her modern look in the comics.

How did Mattel do on this set? This mold for Batman has been used before, but Catowoman is entirely new. Is she alone worth buying the 2 pack for? Read on and find out! 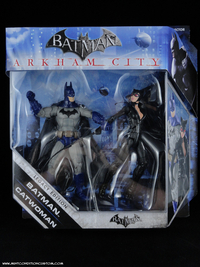 PACKAGING- The packaging for this set is the standard for the 2 packs we’ve seen in the Batman Legacy line so far, only decked out in Arkham City artwork and logos. There’s a very pretty photo on the side and on the back showing off both figures in the set. All the names and logos are clear on the front, letting you know who the characters are.

I particularly like how they’re posed in the package too. This isn’t something you would think matters too much, but it’s nice when the figures are in an attractive looking pose in package.

SCULPT - Catwoman has a fantastic sculpt. Her suit is textured all over, and the attention to detail is great. The little diamonds on the torso, the rough leather look on her arms and legs, and the boots are all nicely done. Her head sculpt is great as well. The face is sculpted with a small smirk, and her cowl and goggles look very good. Sadly, the goggles aren’t removable though. 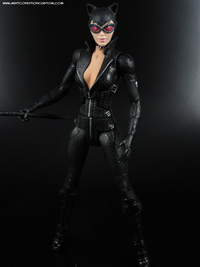 Now one caveat I have about her sculpt is her feet. They’re tiny. Like so tiny that Sgt. Hatred would swoon over them (Venture Bros. fans will get the reference). She’s wearing high-heeled boots, and I know that when women wear those it compresses the feet and makes them look smaller, but these are small even when taking that into consideration. She can hardly stand on her own because of it, which made posing her even for this review a pain. You’ll most likely need to lean her against something or include some kind of stand in order to get any decent posing from her.

Batman’s sculpt is also very well done. The entire suit is textured in a very small diamond pattern, something I sure wouldn’t have been able to be done without the advent of 3D printing. You can see some good muscle definition under the suit, and there’s lots of rivets and piping that help define it. The bat symbol on his chest is raised as well, which is a nice surprise.

The boots and gloves are very hi-tech looking and have lots of great detail. His cape looks great, and it’s incredibly pliable, which means it shouldn’t hinder his articulation at all. It’s also not attached to his back like Mattel usually does. The cape and neck piece are one, and they slip over the neck of the figure, creating a nice seamless illusion. He has a good head sculpt, reminiscent of his game model, though for some reason that I cant’ put my finger on the head does seem a bit small. It looks good in proportion with the body, but next to the other Arkham City figures, it just seems small for some reason. I’m not sure why. 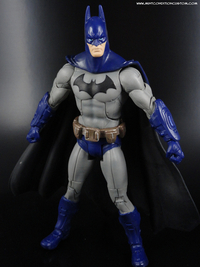 Also his hands are kind of weird. They’re supposed to be fists, but they seem to be only half closed, and they’re straight. Usually when you make a fist, your hand is tilted inward slightly. Here it’s not. He’s going to hurt himself more than anyone else throwing punches with fists like that.


PAINT – Catwoman has a very nice paint job. Her suit has a good mix of gloss and flat black, which really helps separate the different areas and make them look better. She has zippers and buckles which have been accented with silver, and the entire body is painted really smoothly. Not a single bit of mess or sloppy edges, not even on her head, which can be a problem area for action figures. There’s a faint metallic sheen to her goggle lenses too, which I really like.

Much of Batman has been cast in the appropriate color, with the majority of his suit being a medium gray. The bat symbol is painted black, and there does appear to be some shading, particularly around his muscles to help define them. For some reason, in this set, Mattel decided to make Batman’s cape, cowl, trunks, gloves, and boots a dark blue. I suppose they needed a paint change in order to justify using this mold for a third time, but I’m not sure it works. The black and gray is game accurate and looks better in my opinion. I’m not a fan of the dark blue. It clashes, and the paint they used seems too glossy, so I’m definitely not a fan of it. 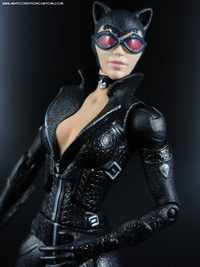 It’s a decent amount of articulation, but like so many of the figures Mattel makes, I wish there was more. Especially in regards to the acrobatic types, they need double elbows and knees to really achieve proper poses. Not only that, but again like other DC females Mattel makes, her ab crunch is practically worthless. You get a some back motion, and just a tiny bit of forward motion. You can get some good poses out of her, but with those tiny feet I mentioned before, you’re going to have a hard time getting her to stay in any pose without some kind of support. Seriously, I can’t get over the tiny feet. 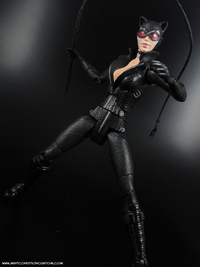 Batman has a ball jointed neck, ball jointed shoulders, bicep rotators, single elbows, forearm rotators where the gloves end, wrist cuts, ab crunch, waist cut, t-hinge hips, thigh rotators, single knees, and back and forth ankle pivots. Again, decent amount of articulation, but still pretty restricted. His knees and elbows don’t have a very good range. You’ll need to remove some plastic to get him to bend any further.

Also, yet again, while his ab crunch gets a good back motion, it doesn’t go forward very far. It looks like it should, but it just doesn’t. I think there must be a tab inside the torso that keeps it from going forward very far. I’m not sure why Mattel would do this, but if you crack him open and remove that tab he should have a better range of motion.


ACCESSORIES – The only accessory included in the entire set is a whip for Catwoman. Batman has closed fists, so he can’t hold anything anyway, but still, adding something else into a $30+ set would have been nice. Anyway, Catwoman’s whip is great. From what I can tell it’s a brand new sculpt, but it does look similar to the one with the DCUC Catwoman, just more detailed.

It actually looks like it’s wrapped in leather straps, and there’s texturing even on the loop at the end. All the tails are twisted. It looks excellent and is very pliable, so it’s perfect for wrapping around other figures. It’s not wire bendy, so you’ll need something to hold it off, but it can conform around other figures and doesn’t lose it’s natural look. Unfortunately, as good and appropriate as this accessory is, I have to dock points for not including something more, considering there’s a whole other figure in the set. 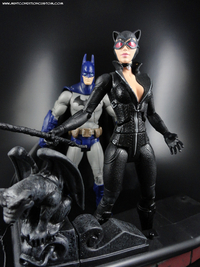 FUN – It’s Batman and Catwoman. Are they ever not fun? Batman is one of the most popular characters ever created, so just about any figure of him will be considered fun, especially by kids. This version has the added bonus is being based on Arkham City, which had a lot of great character designs.

Catwoman features the same bonus, and given her popularity, she’s definitely a fun figure too. Even without the pretenses of a popular character, they’re both still fun and interesting characters, despite the hangups they have.


OVERALL – It’s not without its problems, but this is a good set. Yes, we’ve seen this Batman mold before, and if you already have him then you’ll feel apprehensive about buying this set, but I think it’s worth it to get Catwoman. She’s a new character to this line, and has an entirely unique sculpt. She’s visually interesting, has decent articulation, and if you’re a Batman fan you’ll need her in your collection. She’s a quintessential Batman character. She has tiny feet, which can prove troublesome for certain poses, but overall it’s worth it. 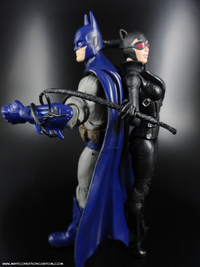 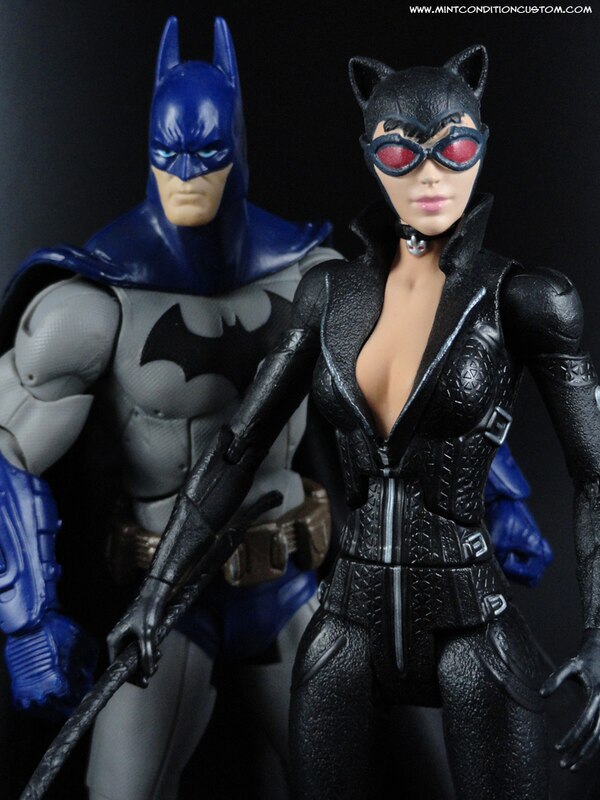 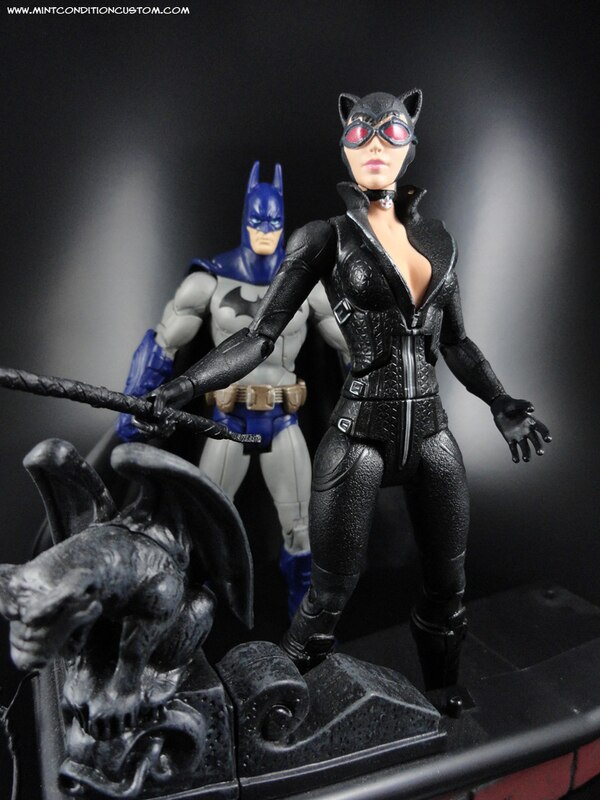 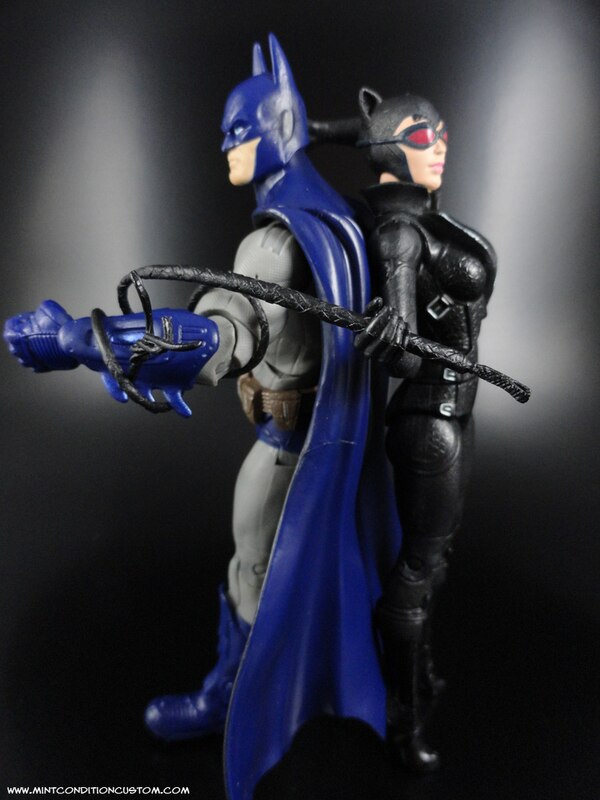 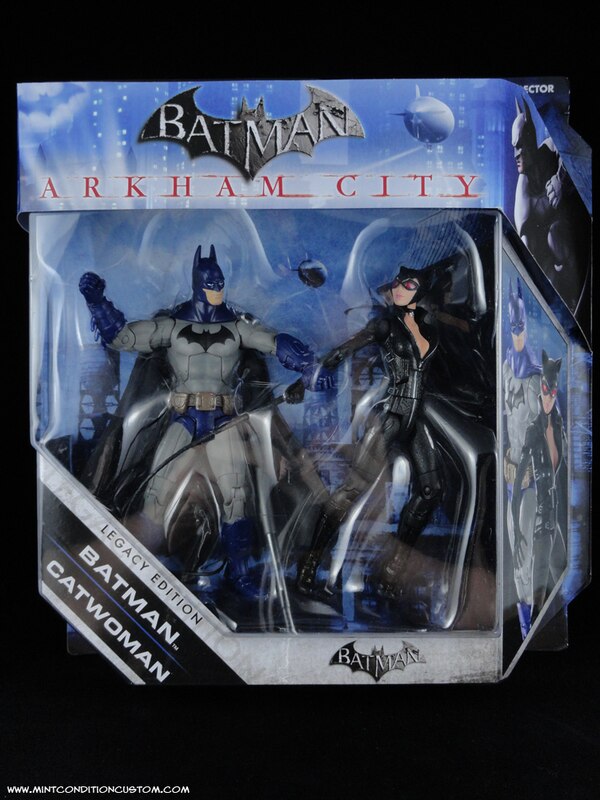 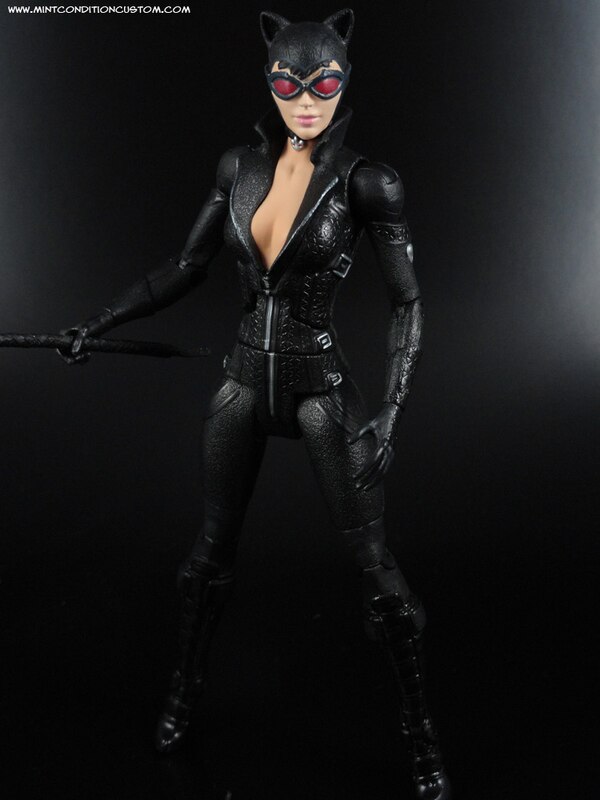 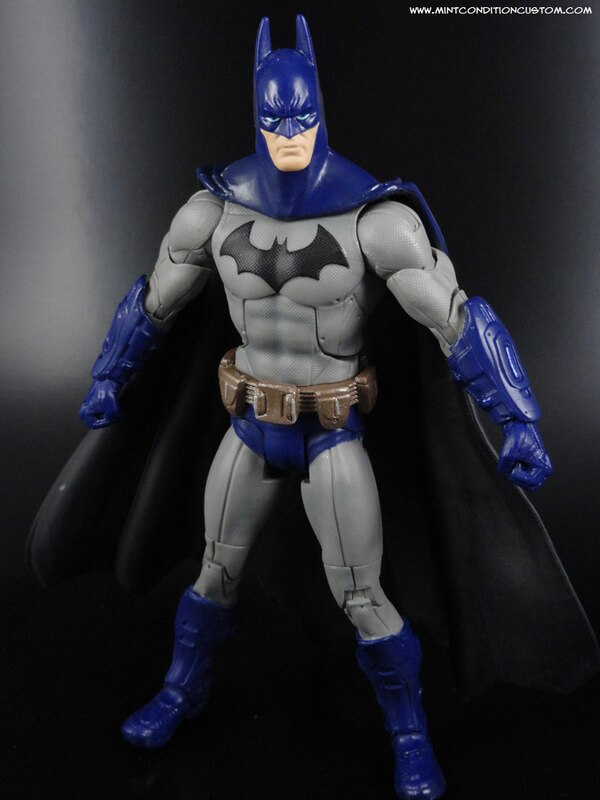 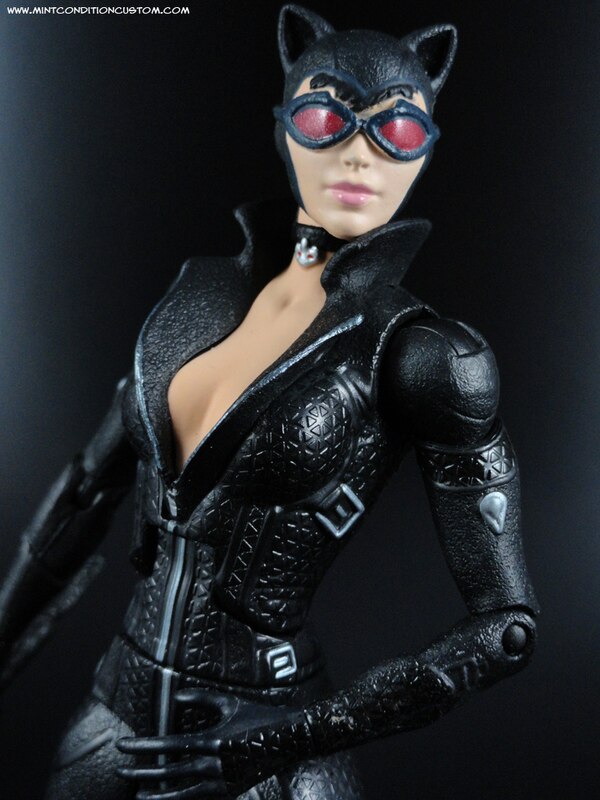 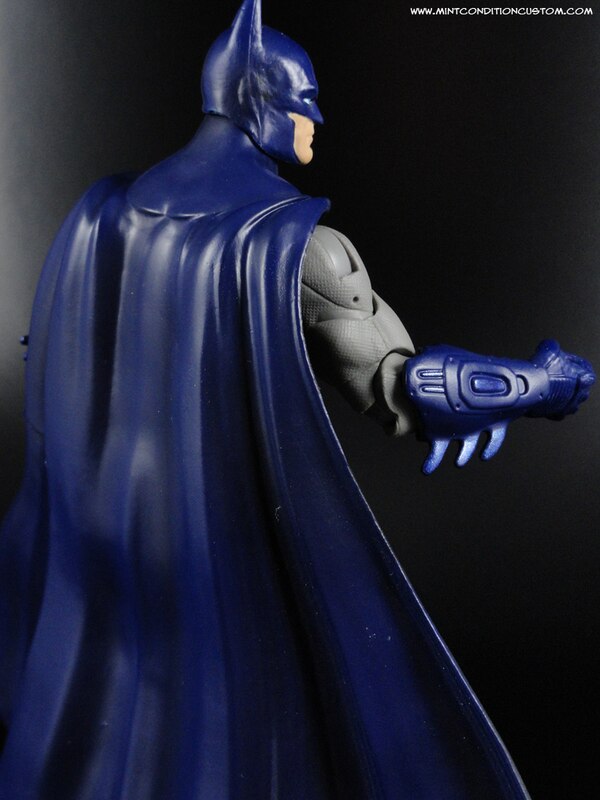 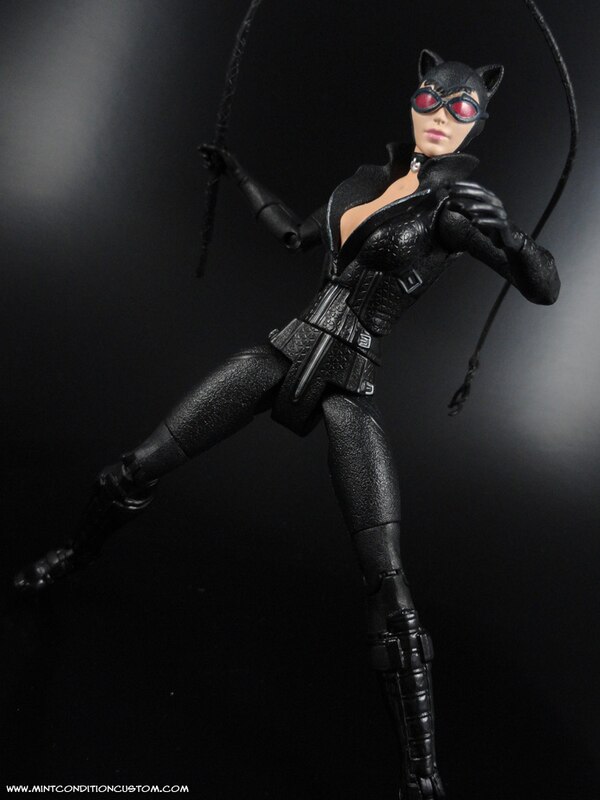 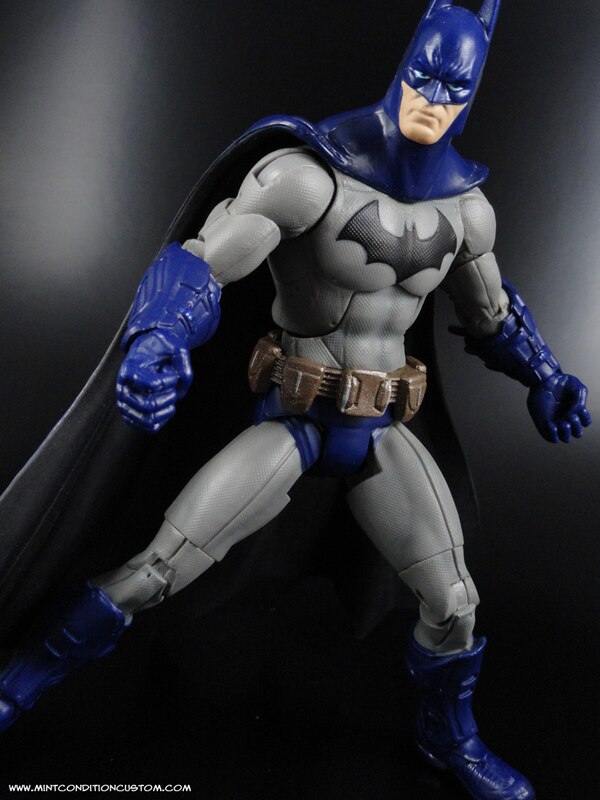 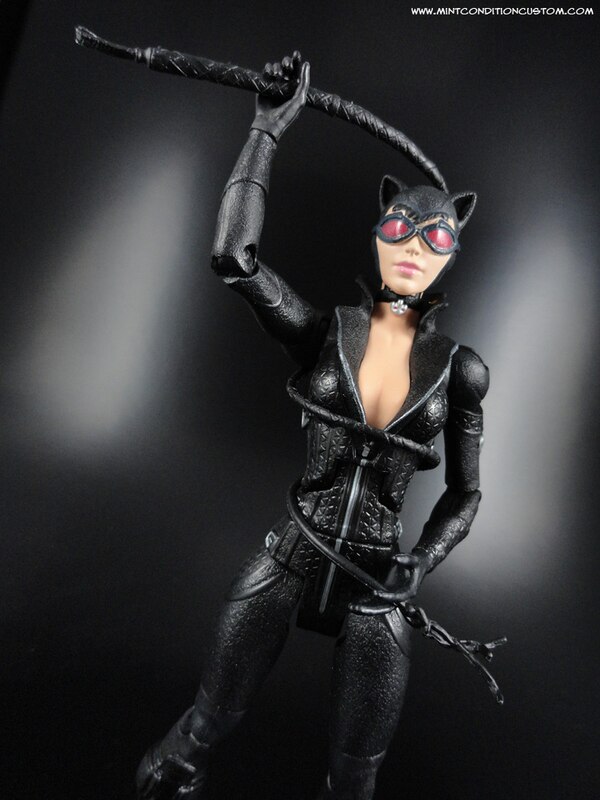