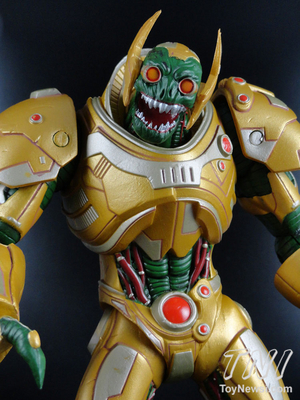 With DC Collectibles release of characters from the New 52 Justice League comic, a lot of fans have been waiting for a villain to display their heroes against. Well, now just that figure has arrived. While not the most famous of villains, the Parademon is a staple of Darkseid's army on Apokolips to help battle the Justice League, and has been featured rather prominently in the new Justice League comic series. DC Collectibles has the drastically different New 52 look for the Parademon represented in plastic here, so let's get down to the basics and find out if this figure is worth its weight in plastic.

PACKAGING - The mostly white box is a minimalist style DC Collectibles is using for not only these figures, but for their statues and many of their other collectibles as well. I actually like the minimalist style here, though I do wish it were different for other lines. Using the exact same style of packaging for everything you produce seems...boring and uninspired. I get the desire for consistency, so when someone sees that packaging they instantly know who made it, but I just can't get passed how boring it is. Again, I think it would be great packaging for just this line, but with the knowledge of the same style being used on absolutely everything, I just don't really like it. 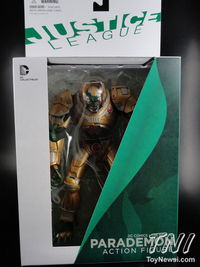 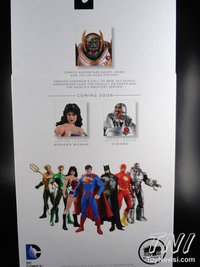 SCULPT - The Parademon stands at just over 8" tall. The overall look is definitely a lot different from the classic Kirby style we're used to. It's bigger, and there's a lot more armor and tech involved with the design. Pretty much all the armor covering him is big. Big shoulder pads, huge forearm gauntlets, and a huge chest piece. It's all sculpted very well though, with lots of various panels, and lining, and Apokalyptian tech symbols. You can see the Parademon's stomach through the armor, with wires and hoses running down. You can see the same on his back. I'm not sure if the wires are just connected to the suit, or if they connect inside the body of the Parademon, but I'm inclined to think that the Parademon is a mix of organic and tech, like I believe the original was. At any rate, and regardless of what you think of the design, the sculpt here wonderfully represents it. 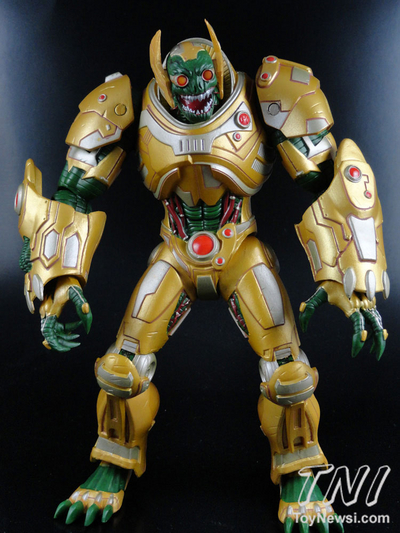 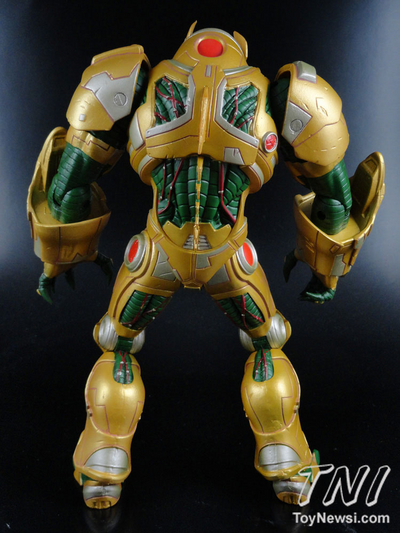 PAINT - As far as I can tell, there's no paint errors, or any mess. I inspected it closely and couldn't really find anything. The armor is painted a sort of matte gold and looks very smooth, with some silver accents. The skin has a few different shades of green, and the hoses and wires are red to contrast against the green skin. Everything looks great on him. 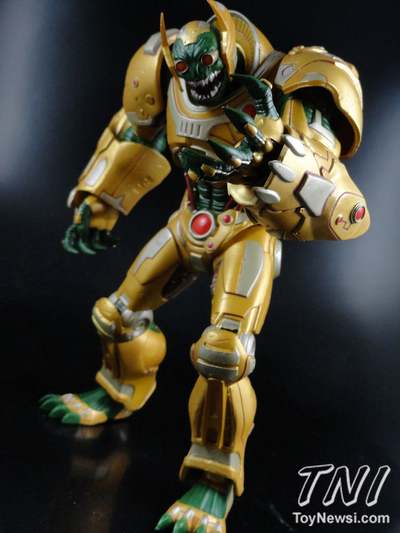 ARTICULATION - The figure has a ball jointed neck, hinged shoulder pads (to accommodate the shoulder articulation), ball jointed shoulders, bicep swivels, single elbows, cut forearms (where the arm meets the gauntlets), cut hips, single knees, and ball jointed ankles. He has a decent amount of articulation to put him in various poses. He could really use a waist cut of some kind to really add to the poseability, but it's not completely missed. The arms have a great range of movement, thanks to the hinged shoulder pads, and thanks to the ball jointed ankles, you have plenty of poses for the legs as well. You can't spread his legs any further or closer apart than they are, but you still have more than one posing option. The ball jointed neck is restricted by the sculpt, and therefore he's permanently looking down, which is unfortunate. 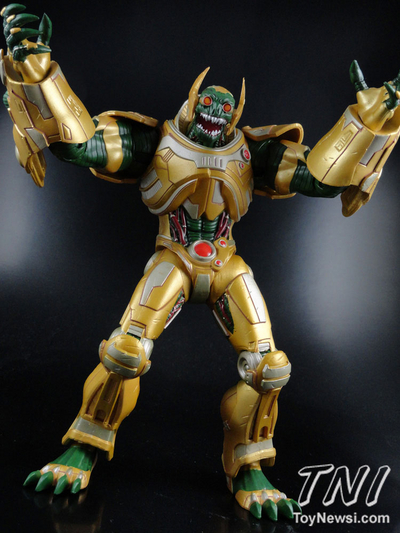 ACCESSORIES - No accessories are included with the Parademon, though I really think he could have benefitted from some sort of weapon at the very least. 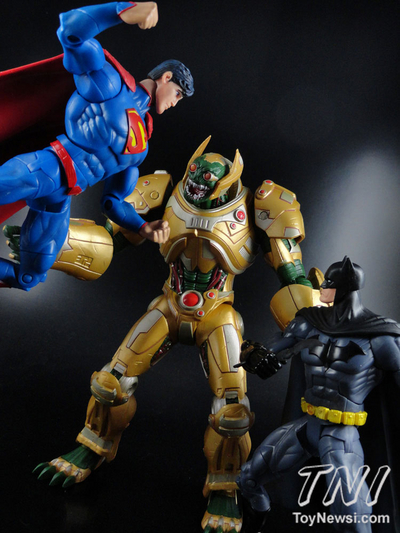 FUN - He's a lot of fun. He's huge and looks funky and is just fun to pose and play with. What's really cool about him is that he's supposed to be really huge, so if you wanted to display him with your Mattel DC Universe Classics figures, it it should be no problem. Anything to add to your display options, I say. He'd be more fun with weapons, but since he has open hands you can at least have him grappling with his enemies. And with the prospect of army building him, he becomes even more fun.


QUALITY CONTROL - His biceps are pretty loose. They tend to fall on their own after you let go of them. 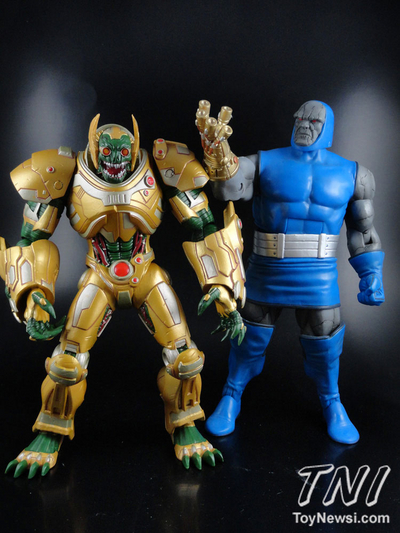 OVERALL - I think this is a great figure. The display options alone are grounds for that. He's got pretty standard DC Collectibles articulation, and articulation hounds might be turned off by the lack of it, but the sculpt is phenomenal and the articulation he does have still gives you plenty of poseability. Most places are charging between $20-$25 for him, and if your budget allows it, I recommend army building him. Whether you're a fan of the New 52 comics, or just a DC fan in general, or even if you want a larger, funkier "general" Parademon to lead your Kirby inspired ones, I think this figure is worth getting.

Check out hi-res images below in our GALLERY.
Image 1 of 10 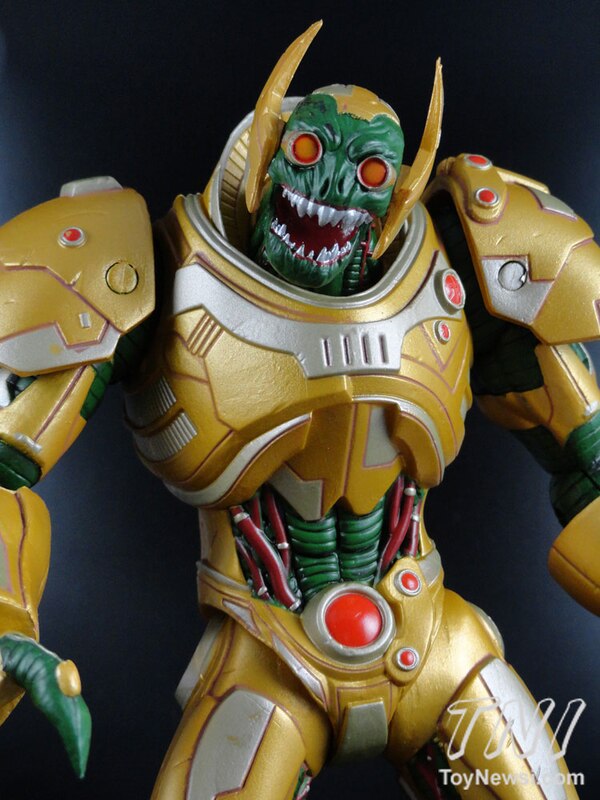 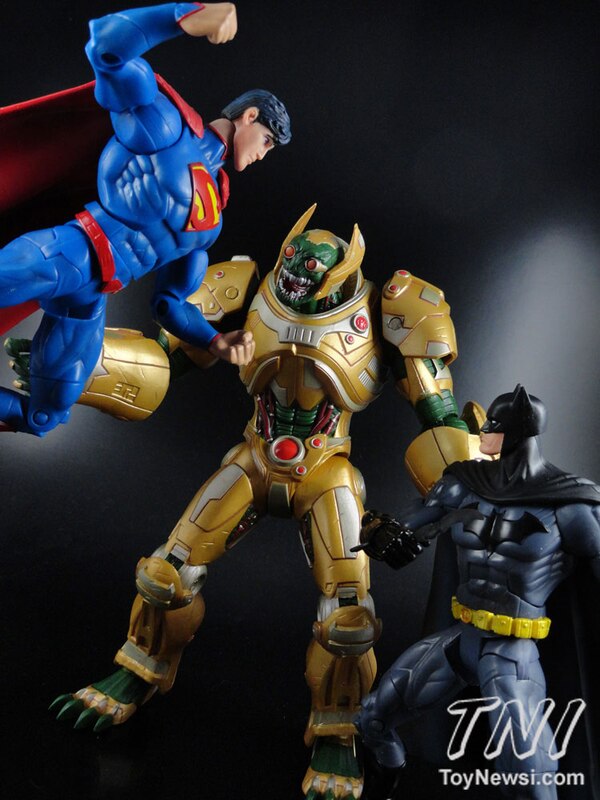 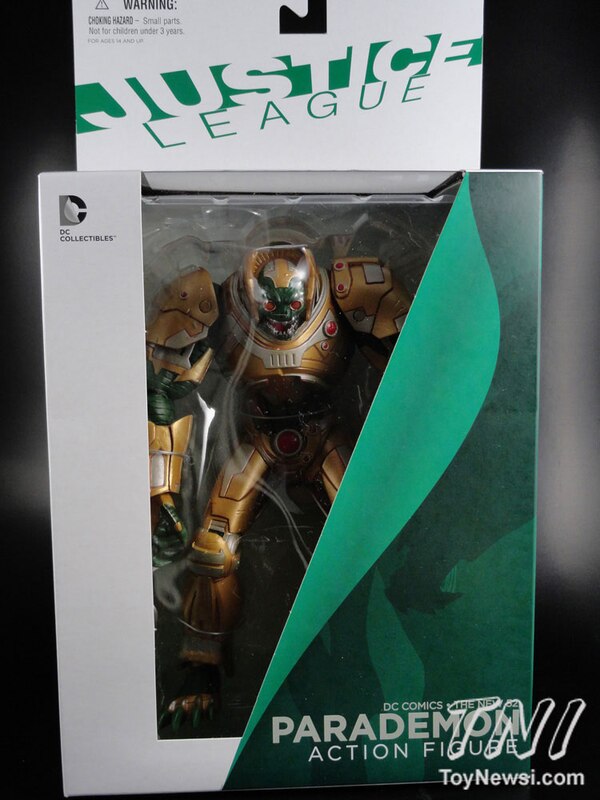 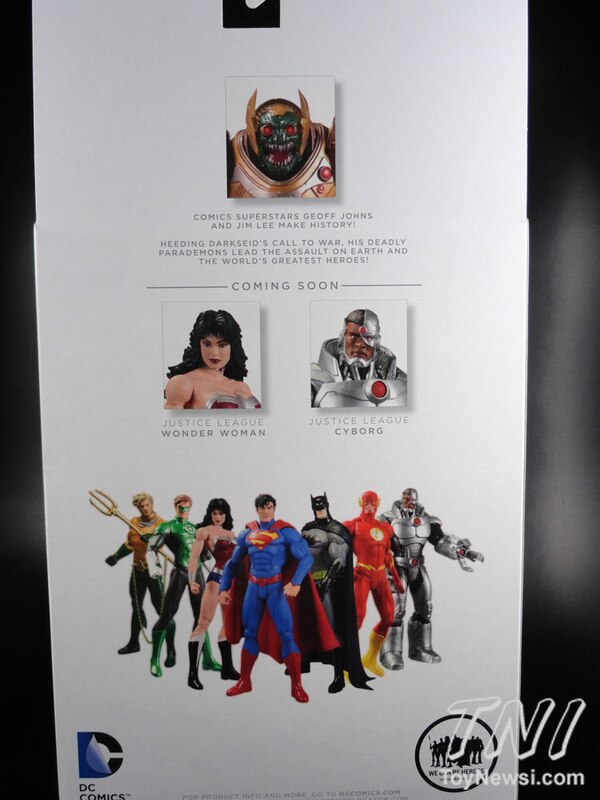 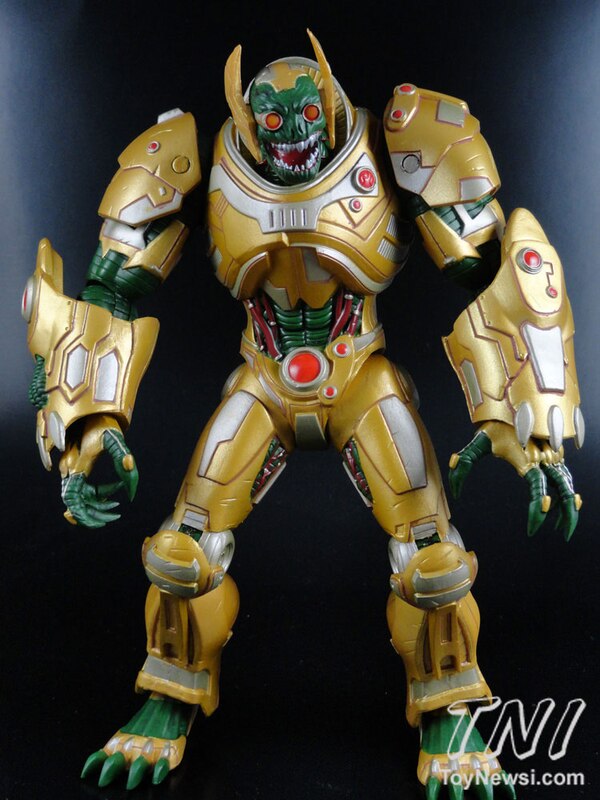 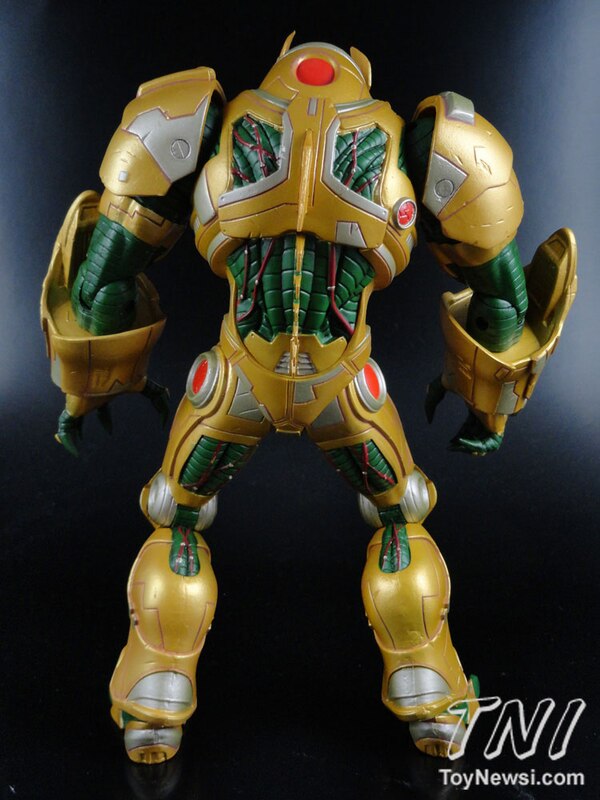 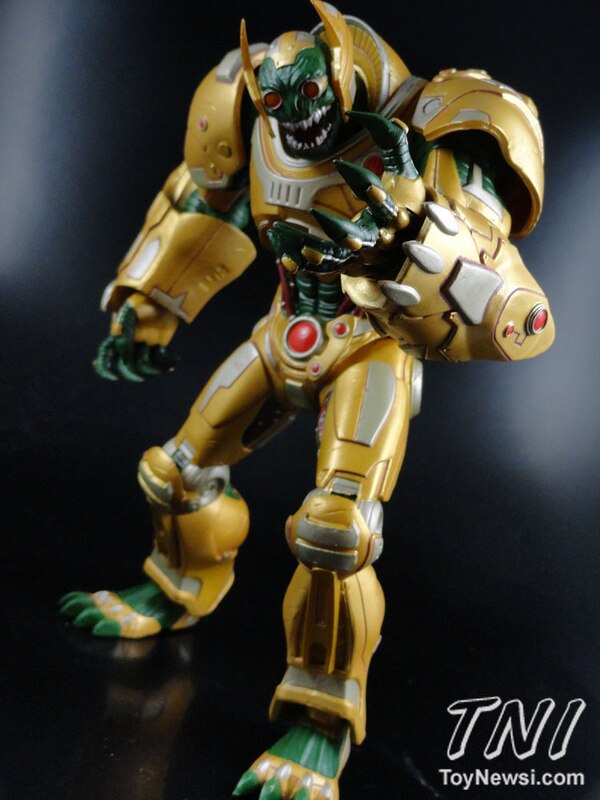 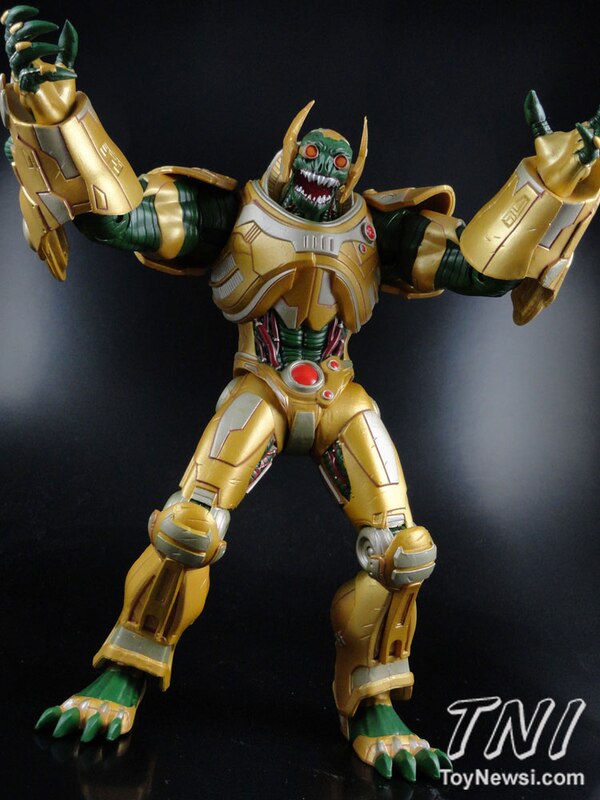 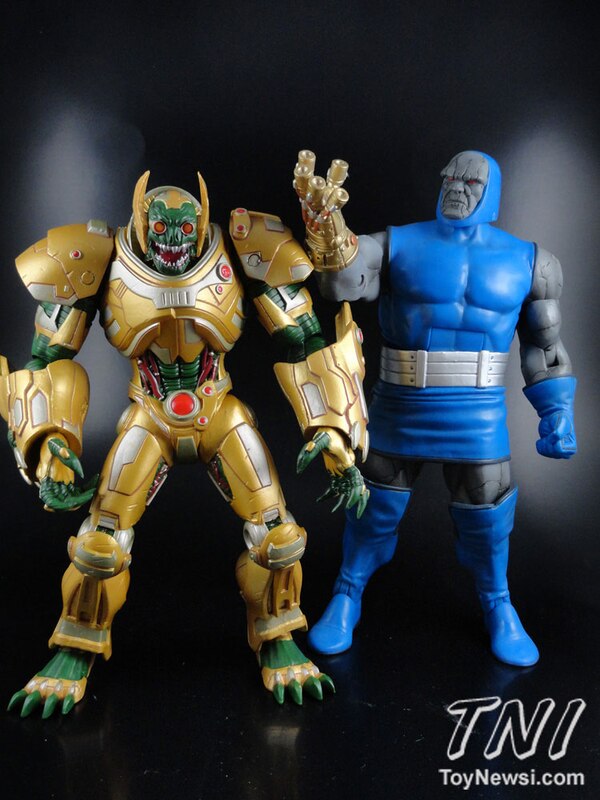 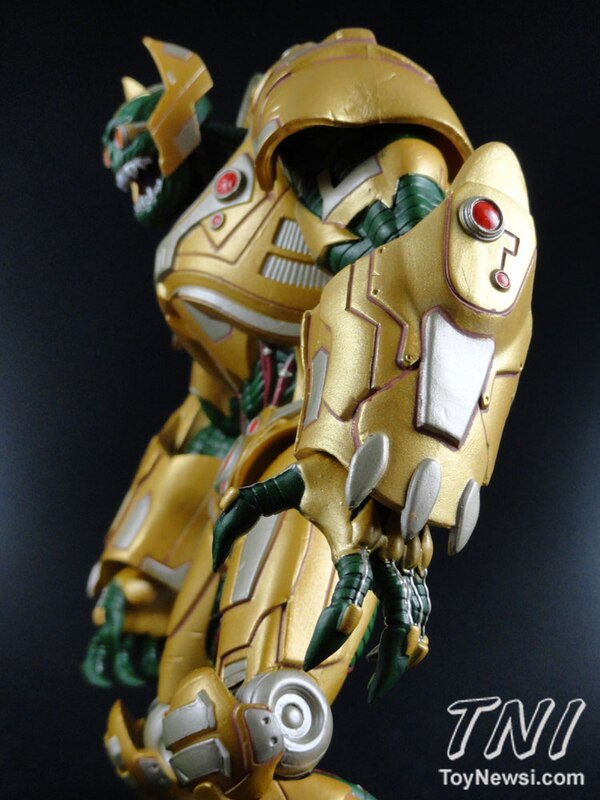