DC Comics
by Jay Cochran
June 14, 2004
Last week we gave you the first look at some upcoming 3.5" Teen Titan figures from Bandai, and now we bring you a look at the upcoming Teen Titans Launch Tower Playset with Trident figure

Teen Titans Launch Tower Playset - Able to leap into action at a moments notice, this deluxe playset launches your favorite Teen Titans from capsules in the tower into their vehicles. Once there, the vehicles can be launched to attack super-villians using controllers in the back. Also includes Tower missiles and cannons that can be aimed through the scope. Figures can sit in the launching cockpits or stand at the aiming dock ready for battle. The Playset can also launch Teen Titans Battling Machines (sold separtely). 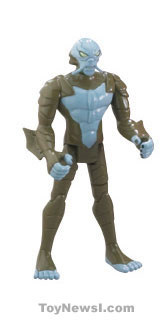 Packaged with 3.5" Trident figure and a vehicle, this is the ultimate Teen Titans playset. SRP $29.99. Release date August 2004.