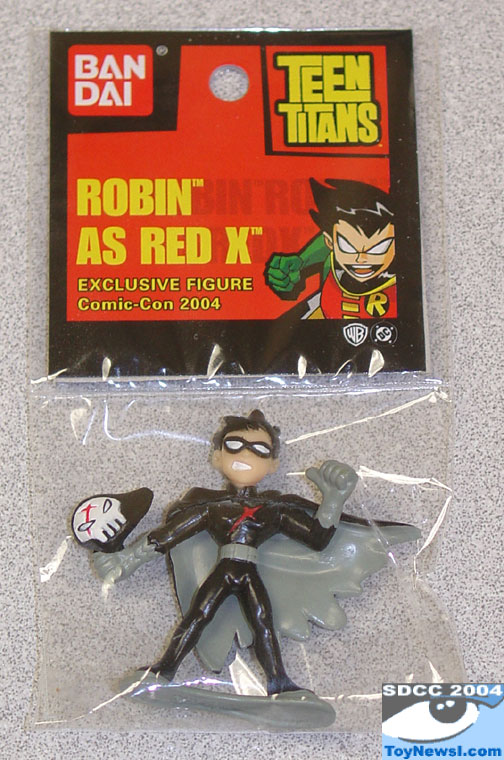 Bandai to Showcase New Home Entertainment and Toys Based on the Some of the Hottest Properties of 2004, and to Host Exclusive Panels & Signings

“As the largest pop-culture gathering of its kind, Comic-Con is the perfect venue for us to bring our extensive toy lines directly to the fans and enthusiasts,” said Matthew Golding, director of marketing for Bandai America Inc.

Fan favorites such as Gundam Seed, Superior Defender (SD) and Astro Boy will all be featured in Bandai’s numerous toy displays. In addition, special activities surrounding Bandai’s hottest new toy line, Teen Titans, will be held at the booth, including exclusive autograph signings with the talent behind the hit TV series. Fans will have the opportunity to meet producer Glen Murakami, producer David Slack and actor Ron Perlman, the voice behind the character “Slade.”

Most exciting for those who need to be “in the know” will be a sneak peak of Bandai’s newest entertainment property, D.I.C.E., set to debut in 2005. Bandai Entertainment will host a panel session featuring the creators of the animated series and unveil the details of the show that has, until now, been shrouded in mystery. An exclusive foil cover D.I.C.E. comic will be distributed throughout the convention.

“D.I.C.E. is unique in that it was created entirely by Bandai’s in-house talent, and it’s rare for one company to produce both the show and toys based on that property,” said Ken Iyadomi, executive vice president for Bandai Entertainment Inc. “It’s very important for us to offer the first sneak peek of D.I.C.E. to the Comic-Con audience. Their feedback and support will be integral to making a property like this a success next year.”

Bandai will be highlighting Gundam Seed, the latest incarnation of the 25-year old Japanese property that can currently be seen on Cartoon Network. Gundam Seed toys will be on display and the home entertainment division will be screening preview clips from their upcoming DVD release of the series. Bandai also hopes Rear Admiral Buskin Alexander (B.A.) Avatar, Director of Enrollment, will be on hand to speak to potential cadets for the Gundam Pilot Academy (www.GundamPilotAcademy.com)


“The response to Gundam Seed has been phenomenal,” said Jerry Chu, marketing manager for Bandai Entertainment Inc. “As the latest and most dynamic series in the history of the franchise, Seed broke ratings records when it first aired in Japan last year, and the fan response in the U.S. has been the most enthusiastic we’ve seen since Gundam Wing first appeared here six years ago. I think people will be very pleased with the DVDs we have planned for later this year.”

Bandai’s new Cards and Collectible Games division will make its Comic-Con debut with demonstrations of the game that has been building tremendous buzz on the summer convention circuit, Navia Dratp. In addition, a revamped version of the Digimon CCG will be on display, allowing gamers to get a taste of the new game mechanics.

“Our presence with Navia Dratp has mostly been at game oriented conventions so far this year,” said Danny Satyapan, head of Bandai’s cards and collectibles division. “This will be the first time such an expansive audience sees just how eye-catching this game is to display, and how easy – yet challenging – it is to play.”

On the video game front, Bandai (www.BandaiGames.com) will be showcasing some of its most anticipated titles, including Ghost In The Shell, Gundam Seed Battle Assault, SD Gundam Force – Showdown!, Galactic Wrestling featuring Ultimate Muscle, and Inuyasha – all for PlayStation®2.

Panels and events currently scheduled for Comic-Con are:

12:30-1:30PM (Room #9) – What is D.I.C.E.? – As the premier distributor of Japanese animation, Bandai Entertainment is proud to unveil its upcoming animated feature, D.I.C.E. Come check out all the details surrounding this new 2D/3D CG series and toy line coming to North America in 2005. An exclusive foil cover D.I.C.E comic will be given away to those in attendance.

10:30-11:30AM (Room #2) – Bandai Entertainment Panel: Executive VP Ken Iyadomi and marketing manager Jerry Chu will be on hand to answer questions on such favorite anime titles as Witch Hunter Robin, Wolf’s Rain, Gundam Seed, and Ghost in the Shell: Stand Alone Complex. Check out the next wave of cutting-edge anime coming to North America from BEI, as well as score exclusive DVD and T-shirt giveaways.

Those attending Comic-Con should check the daily show schedule and booth #3629 for a complete listing of all activities taking place at Bandai’s massive 50-foot display.

Bandai America Incorporated is the master toy licensee of some of the most popular properties and brands in children’s toys and entertainment, including the Power Rangers, Gundam, Teen Titans, Astro Boy, Strawberry Shortcake and Tamagotchi product lines. Bandai America is headquartered in Cypress, California and company information is available at www.Bandai.com.