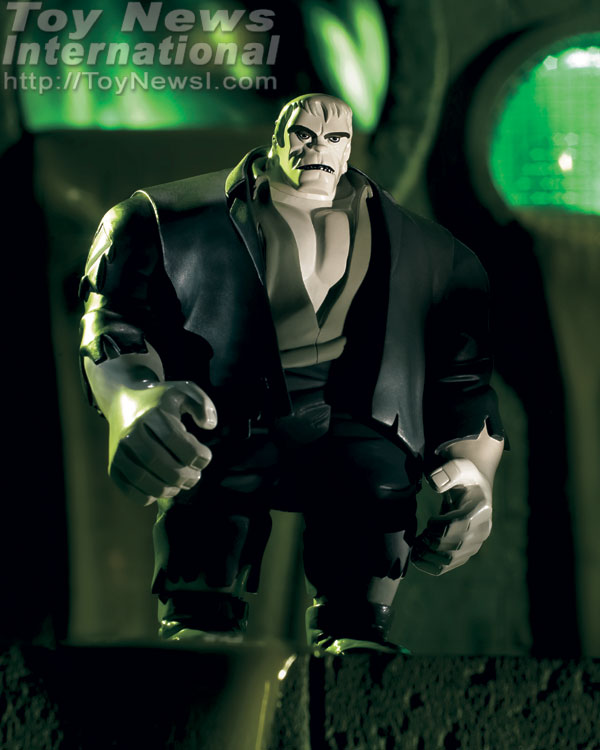 
We were the first to show you images of Mattel's new Summer exclusive Justice League Unlimited Solomon Grundy figure, which will be limited to a 5000 piece prodcution run. Half to be sold at the 2006 San Diego Comic Con & half to be released at the 2006 Wizard World Chicago Con.

"Solomon Grundy, born on a Monday,
Christened on a stark and stormy Tuesday,
Married on a gray and grisly Wednesday,
Took ill on a mild and mellow Thursday,
Grew worse on a bright and breezy Friday,
Died on a gay and glorious Saturday,
Buried on a baking, blistering Sunday.
That was the end of Solomon Grundy."

And now we here at TNI have obtained one of these cool figures early, and want to give it away to one lucky reader. If you would like a chance to be that one lucky reader, this is what you have to do.

Send an email titled "Solomon Grundy" to Jay@Toynewsi.com with the following information:

- Name
- Mailing Address
- Age
- And the number of Justice League Unlimited figures you currently own.

ONLY ONE ENTRY PER PERSON, AND ALL ENTRIES MUST BE RECIEVED BY 7/10/06.

We will then take the names of everyone who sends in an email with the above information, and hold a drawing to be held on 7/11/06. The person who's name is drawn will be sent via mail 1 FREE Mattel Summer Exclusive Solomon Grundy figure without even having to attend any of the conventions.