DST Lines Up The Next Generation of Star Trek Action Figures! 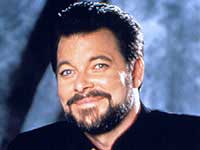 The first action figure assortment under the new Diamond Select Toys (DST) and Art Asylum agreement will feature Commander William Riker and Lieutenant Worf from Star Trek: The Next Generation. The 7" figures will boast 16 points of articulation, include episode-specific accessories and will be released in the fall of 2005.

The core assortment of figures will be available everywhere DST products are sold and will include a total of three figures. Season 7 Riker will feature the standard two-tone crimson and black Starfleet command uniform as seen during Seasons 3 through 7. Also included is Season 7 Worf, wearing his gold and black uniform with Klingon sash and ponytail from TNG’s later seasons. The last figure in the core assortment is the limited Lieutenant Thomas Riker wearing the Starfleet duty uniform from the Sixth Season episode "Second Chances." Additional exclusive versions of Riker and Worf will also be available through various retail outlets with more details to follow.

There will be a four figure set based on the Star Trek: Deep Space Nine episode "Trials and Tribble-ations" featuring Captain Sisko, Lieutenant Commander Dax, Chief O’Brien and Dr. Bashir scheduled to be on sale early summer of 2005.