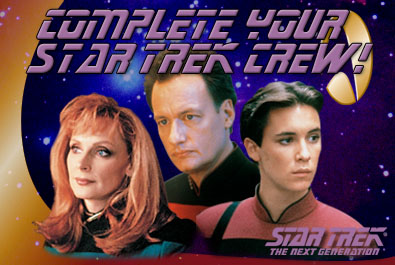 With the Picard and Troi figures hitting stores soon, we’re pleased to officially announce the fourth series of Star Trek: The Next Generation action figures will feature Dr. Beverly Crusher, Wesley Crusher and Q! Based on their appearances in both the series and the feature films, Series 4 will contain three core figures and several retailer exclusives!

Dr. Beverly Crusher has served under Captain Jean-Luc Picard for more than a decade and never fails to deliver when her medical expertise is needed. Her personal relationship with Jean-Luc has strengthened over the years, ever since the death of her first husband. Wesley Crusher was identified as possessing a very talented and unique mind, which allowed him to take the helm of the U.S.S. Enterprise even before his Starfleet training began. Rising to the rank of ensign, he abandoned his parents’ career and left on a metaphysical journey with the mysterious Traveler.

You can expect the same articulation featured in the previous Star Trek: The Next Generation figures, with incredible attention to detail and series-accurate accessories. The core assortment is scheduled to contain Season 7 Beverly Crusher and Ensign Wesley Crusher along with the limited Q, depicted wearing his Starfleet uniform! Images and details will be announced along with the full lineup of exclusive figures as the Spring 2007 release date approaches.