Masters Of The Universe 6 Inch Collectibles 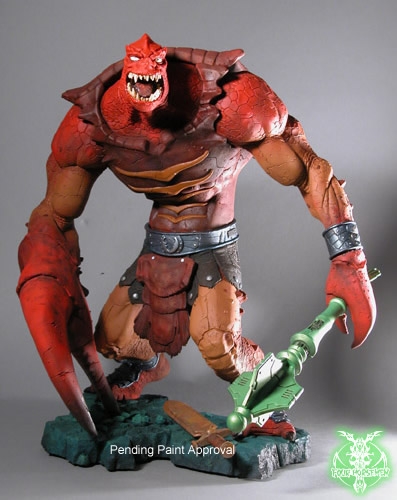 The MotU legions have spoken and, as we’ve always tried our best to do in the past, we’ve listened to you and here’s our response…You wanted ‘em - you’ve got ‘em.

Whether the Masters of the Universe action figure line is actually dead or not, for months now MotU fans have been without any new figures to finish out their collections. Being fans of MotU ourselves, we know exactly what you’re all going through. We’ve heard your cries of anguish and we now heed your call.

Four Horsemen Studios and NECA would like to officially and proudly announce their upcoming line of collectable 6-inch scale cold-cast figures!

Masters of the Universe fans have been suggesting this solution to their current dilemma time and again through letters, posts on message-boards and e-mails, and we think it’s a fantastic idea.

The 6-inch scale cold-cast figures will be fully painted, non-articulated micro-statues that will come with all of their originally intended accessories, and a base - the color of which will designate the faction of that character (purple for Skeletor’s minions, red for Hordak’s horde, green for King Hsss’s troops, etc., etc.).

We’re going to attempt to use some sort of clam-shell or blister-card/box type of packaging so those wishing to display them alongside their unopened MotU action figures will be able to do so.

What you will see, in at least the first two waves, are characters that you’ve been waiting to see since the new Masters of the Universe action figure line launched back in 2001. All with paint schemes and accessories that you want to see, and in scales that are proportionate to each character!

We’re not going to reveal who the characters in the first two waves are just yet, but we will tell you that none of those five characters have been seen in 6-inch figure form since waaaay back in the eighties!

News identifying the characters, images and the release of this first wave is going to come fast and furious, so get ready. We expect to release the names and images of most of the first two waves near the beginning of the year, with the first wave of MotU 6-inch scale cold-cast figures to ship very soon thereafter.

We know what you’re probably thinking, "Great, a fully painted, 6-inch scale, cold-cast MotU figure line, with the bases? How much am I going to have to shell out for these? 50 or 75 bucks a pop?" Not even close.

Believe it or not, we’re trying our darndest to get the price at or below $20.00 each. We’re still working out all of the logistics, so depending on how the packaging/shipping issues go, it could be slightly more than that, but rest assured that we are trying. How is this possible? We have no idea, but the guys over at NECA are crunching the numbers, and things are looking good.

From the minds of MotU fans and onto the shelves of collectors world-wide. None of this would be at all possible without the support that all of you MotU fans have given us. Don’t give up all hope just yet. You never know what the future may hold…we’re still listening.

Shown above is of a 12" version MOTU statue done by the Four Horsemen.