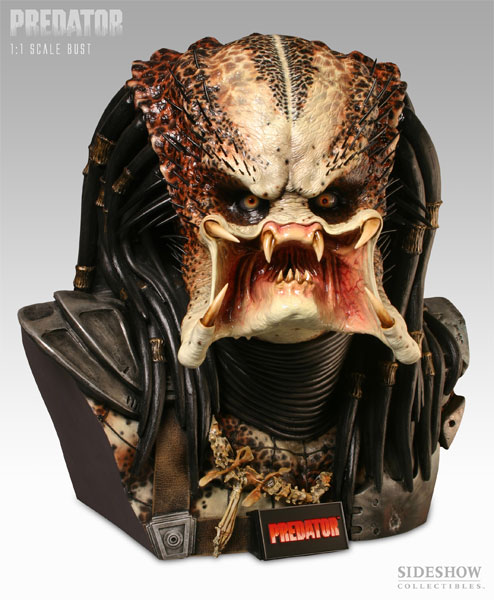 Released in 1987 and directed by John McTiernan, Predator is the story of a military special operations team, lead by Major Dutch Schaeffer (Arnold Schwarzenegger). Dutch and his team, Dillon (Carl Weathers), Blain (Jesse Ventura), Poncho (Richard Chaves), Billy (Sonny Landham), Mac (Bill Duke) and Hawkins (Shane Black) soon find themselves in a fight for their lives with an unseen foe. During the course of their mission, the illusive Predator (Kevin Peter Hall), an interstellar big game hunter, begins to kill Dutch's team members one at a time. With the use of it's alien technology and weapons, physical prowess, and insatiable lust for it's trophies (human skulls), the Predator is successful in wiping out Dutch's team, culminating in the ultimate battle for survival between Dutch and the Predator.

The success of the Predator movie lead to the release of a sequel, Predator 2, numerous books, comics, toys, and video games, continuing the character's longevity and building its legacy. Twentieth Century Fox is currently producing an Aliens vs. Predator crossover movie for release in August 2004.

The partnership between Stan Winston Studios and Sideshow Collectibles will allow fans of the film to own and enjoy prop and character replicas which will be produced from the same molds used on the original Predator movie. Stan Winston Studios is sculpting and producing the prop replicas, while Sideshow Collectibles will handle all manufacturing, marketing and distribution to their world-wide audience of fans and collectors. This partnership will allow for the creation of highly accurate reproductions, so that avid collectors of Predator memorabilia have the privilege of owning replicas that are as close to props as they could possibly be, without actually lifting one right from the film set.

Sideshow Collectibles will manufacture both a life-size, 1:1 scale bust, as well as a 1:4 scale figure of the Predator. The Predator bust will be amazingly realistic and show the complete face without a helmet or mask, as he appeared during the epic battle with Schwarzenegger in the final scene of the film. The Predator's head will be reproduced in great detail with amazingly life-like color and texture, bony protrusions on the scalp aligned with the skin markings of the Predator species, deep, red eyes, set back in the skull, and an open mouth showing a menacing mix of membrane, teeth, and fangs. The long hair of the Predator falls down over armored shoulders, and the bust shows the upper portion of the chest as well. The Predator bust will have a suggested retail price of $845. and will be released as a low-run limited edition in the 4th quarter of 2004.

"This is one of the iconic creatures in film history and while the Predator has been a product concept for some time, we're pleased to offer such an amazingly detailed piece that has not been previously brought to market," said Tom Gilliland, Creative Director of Sideshow Collectibles. "There is nothing quite like coming literally face-to-face with this creature in 1:1 scale!"

The Predator figure that is planned will be a quarter-scale rendition of this classic character displaying his distinct physical features, weaponry, armor, and alien form. The final retail price of the figure has not been determined. The piece is scheduled for release in the 2nd quarter of 2005. In the tradition of Sideshow's manufacturing philosophy, the figure will be produced as a low-run limited edition. The final edition size has not been determined but will be announced prior to the release of the product. The life-size Predator bust will debut at the San Diego Comic Con, held July 21 - 25, 2004, at the San Diego Convention Center, at the Sideshow Collectibles booth #2029.

Predator is a copyright of Twentieth Century Fox