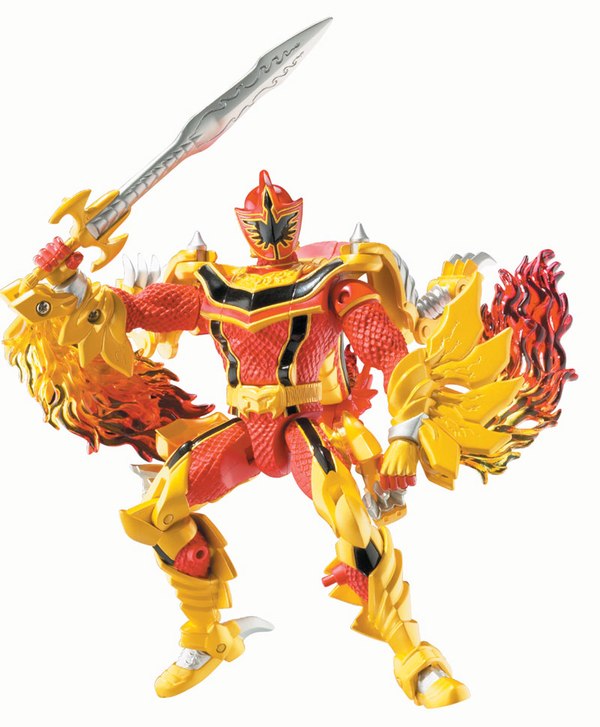 
One Power Rangers fan can win a $5,000 scholarship by tapping into his/her inner filmmaker for the "What Happens Next?" Complete the Ending Contest. From April through June 2006, Bandai America Incorporated -- the manufacturer behind this popular and 14-year-strong toy line -- is calling for kids to submit their own videos or photos showcasing their Power Rangers Mystic Force action figures and other products in action. The unique contest asks fans to use their creativity and imagination to come up with a thrilling conclusion to the cliffhanger battle scene that is currently featured online at GetPowerized.com, the official Web site of Bandai America's toy line.


The scene featured on GetPowerized.com takes kids through a classic confrontation of good versus evil, featuring the Spring lineup of Power Rangers Mystic Force action figures and vehicles against the relentlessly attacking Evil Space Aliens. Though it seems that the Power Rangers will prevail, the mysterious ending indicates that there might be more to come. Kids can create the next chapter using video/digital or cameras, computers, etc. -- along with the help of a parent, older sibling or friend. At the end of each month during the contest period, other fans can visit the Web site and vote for their favorite entry, with three finalists going on to qualify for the cash scholarship prize. Each vote is also a sweepstakes entry for an additional boy or girl to win Power Rangers DVDs and other prizes.

"The GetPowerized.com movie is not only an imaginative way to showcase our product line, it closely resembles how our fans like to play out the adventures that they see on their favorite TV show," said Matt Golding, director of marketing for Bandai America Inc. "This contest is a great way for them to capture all the fun and excitement that they have with their Power Rangers toys on camera for the chance to win a great cash prize. And since today's kids are so much more tech savvy, we're really looking forward to seeing all the entries and how imaginative they are."

With unique visual and sound effects, the online battle scene features stop-motion animation that has become popular again with movies featuring clay animation. Stop motion is an animation technique that makes static objects -- like a Power Rangers 5" and 6.5" action figure -- appear to move on its own.

The contest is open to children under 8 years old and the winner will be determined by a fan vote online. Kids are encouraged to put on their director hats and come up with the most compelling visual story. The contest period runs from April 1st through June 30th. For further information and rules, please visit www.GetPowerized.com.

Since its launch in late 2004, GetPowerized.com has become the premier destination for Power Rangers fans to interact with the toy line and brand. In addition to seeing TV commercials and the products in unique 3-D displays, one of the most exciting features of the site is the Wish List, which enables kids to generate gift lists of their favorite action figures, Megazords and role-play items to share with parents, grandparents and others. Soon, the Family Activity Page will also launch with fun and interactive Rangers-themed activities for the whole family, such as the "Construct & Create Your Own Megazord" in which kids build their own Megazords using items commonly found around the house.

In the latest iteration of the Power Rangers' story, five brave young teens are called forth to take up the challenge and fight for the survival of the planet. Under the guidance of their wise mentor Udonna and the ancient Xenotome, the Book of the Unknown, these five Sorcerers embark on mystical adventures, befriend magical dragons and battle dangerous beasts. Power Rangers Mystic Force debuted in February 2006 as the dynamic 14th season of this perennially popular boys' franchise. As a major ratings and retail powerhouse, the new series airs 25 times a week on ABC Kids and the Jetix boys' action block on ABC Family and Toon Disney.