PACKAGING - The packaging is the standard NECA style clamshell packaging. The inserts are in the same style as from the packaging of the Pressure Suit Engineer. The only difference being the name change, and the photo on the back. It's very good packaging that does its job of displaying the figure and letting people know exactly who they're getting and what it's from. 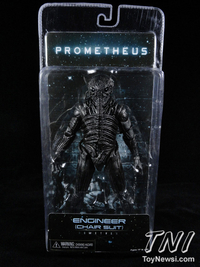 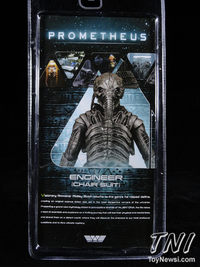 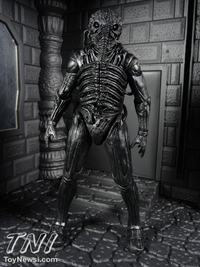 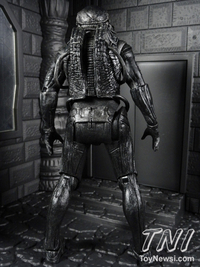 SCULPT - Before, I praised how good the Pressure Suit Engineer figure looked when compared to the movie, and this figure is no different. The sculpt is just phenomenal. I have no idea if it was sculpted completely by hand, or if it was done digitally, but either way this figure looks amazing. Because of the different design of the suit, it hides the articulation points incredibly well, and if you were just glancing at a photo of this figure, you'd be hard pressed to know if it was the figure or a picture of the actor in the suit from the movie. I made that mistake a couple of times when researching comparison photos on Google. In several of the thumbnails, I really couldn't tell photos of the figure from photos of the actor in the suit. To me, this is a perfect rendering of the character in the movie. I can't find any problems with it. Anyone who doesn't think this is a fantastic representation of the character in the movie should probably be admitted to their local mental hospital for further examination. 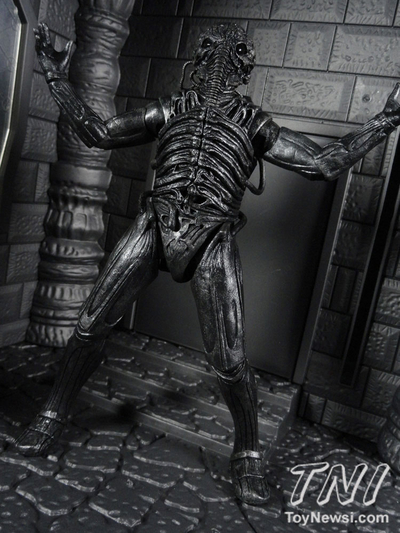 PAINT - It must really be hard, from a design standpoint, to make a figure with a monochrome color scheme not look completely boring when painting it. somehow, they managed to do that. The figure is largely covered in a glossy clear coat to help make it look wet, and because of the deep and detailed sculpt, when the light hits it, you can see everything on him perfectly. Most of the suit is almost a glossy charcoal black, while the eyes are completely gloss black and therefore stand out from the rest of the suit. Again, it must be frustrating to have to deal with characters with such monochrome color schemes, but NECA pulled it off beautifully. It looks just as it should when compared to the movie, and as a figure, still looks visually interesting. 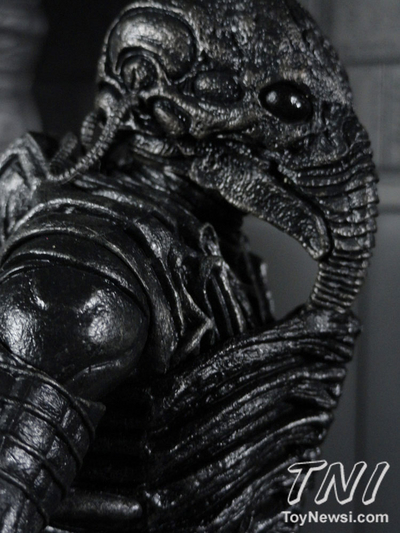 ARTICULATION - He features a ball jointed neck, ball jointed shoulders, bicep swivels, swivel-hinged elbows, ball jointed wrists, a floating ab joint, ball jointed hips, thigh swivels, swivel-hinged knees, and ball jointed ankles. Most of his joints move great, though just like the Pressure Suit Engineer figure, this guy's shoulders are a bit restricted, no doubt due to the nature of the figure's sculpt. His hip joints also work the same way, as they're inserted into his pelvis at a 45 degree angle. That means it takes some doing to get his legs to move up, but you can actually pose him in a sitting position. This will come in handy if NECA decides to release the Engineer's chair as a display piece. I wonder if they thought of that beforehand and that's why they made it so much easier to place him in a sitting position than the Pressure Suit Engineer figure. Of course the photo I have of him sitting in a chair isn't accurate, but hey, everybody's gotta take a break at some time right? 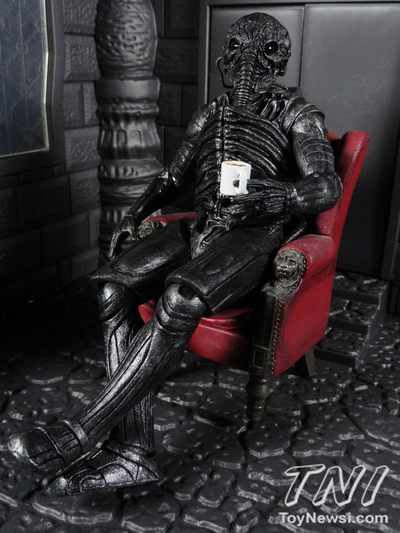 ACCESSORIES - He comes with no accessories, but perhaps NECA could have featured a "build-a-chair" with this line, so you'd have to buy all the figures they eventually make to build the Engineer's chair. That would have been cool. Again, unless they are planning to release the chair as a separate toy. In which case, disregard this. 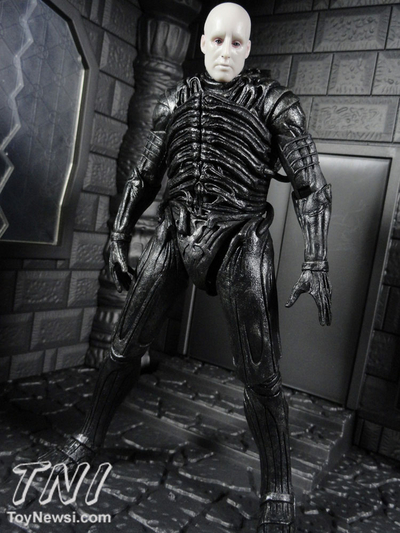 FUN - I'll admit that I had a lot more fun with this figure than the Pressure Suit Engineer figure. I don't know what it is, but this figure to me, seemed intrinsically more fun. Something I noticed while messing with the figures is that the heads pop off with relative ease. This means that if you wanted, you could put the Pressure Suit figure's head on the Chair Suit's body and display him before he puts his helmet on. The Chair Suit figure's head is still attached to the body via cables running from the back of the head to the back of the suit, though they're long enough that you could potentially pose him holding the helmet in front of him, or just let it hang in the back. If you want to disconnect the hoses from the figure and have him holding it in some other way, that's a possibility too. It's all up to you. I think the fact that their heads come off like this, while possibly not something NECA had in mind, makes this figure a lot more fun, though it does mean you'd have to buy both figures separately if you wanted this display option. 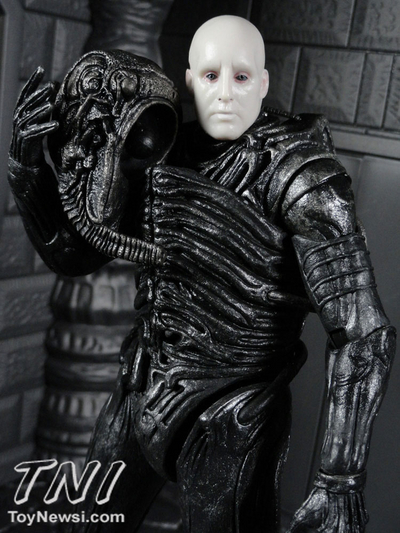 OVERALL - It's a great figure, hands down. I'm someone who's not even that big a fan of the movie, and I was wowed by this figure. The sculpt is nothing short of amazing, and the paint job, while simple in nature, did a fantastic job of highlighting the sculpt and making it look visually interesting. His articulation could have been better, specifically in the hips, and I'm of the opinion that double elbows and knees make a figure better, but the articulation here works really well, and works great for the style of figure it's supposed to be. He features no accessories, but is a ton of fun regardless. With the added feature that I stumbled upon with head swapping, it ups the figure's coolness by quite a bit in my opinion. If you're a fan of the movie, you'll love this figure. Hopefully NECA will make the human characters so you can him interacting with them, but until then, he should look pretty awesome amongst all your NECA Alien figures. 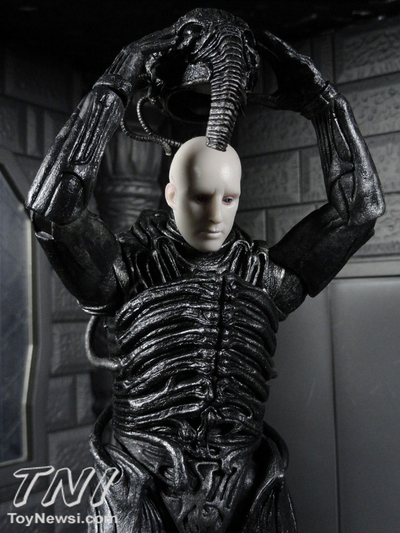 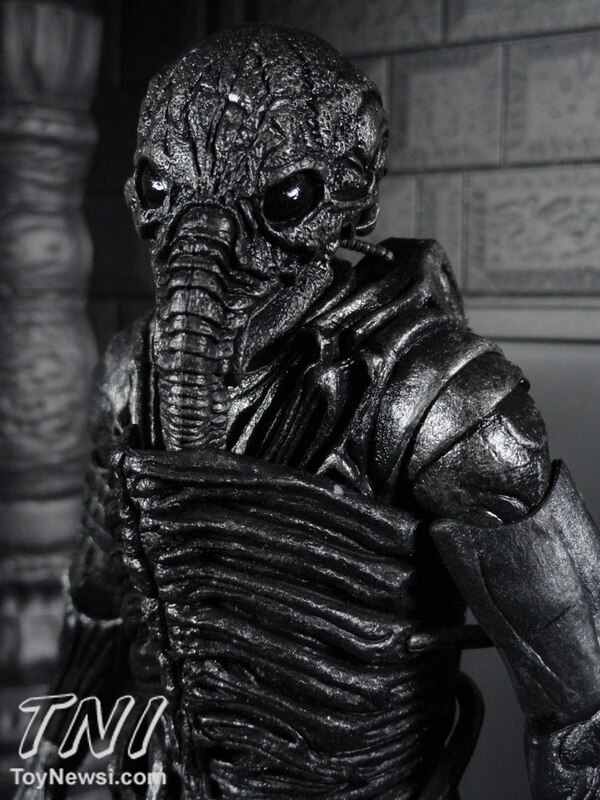 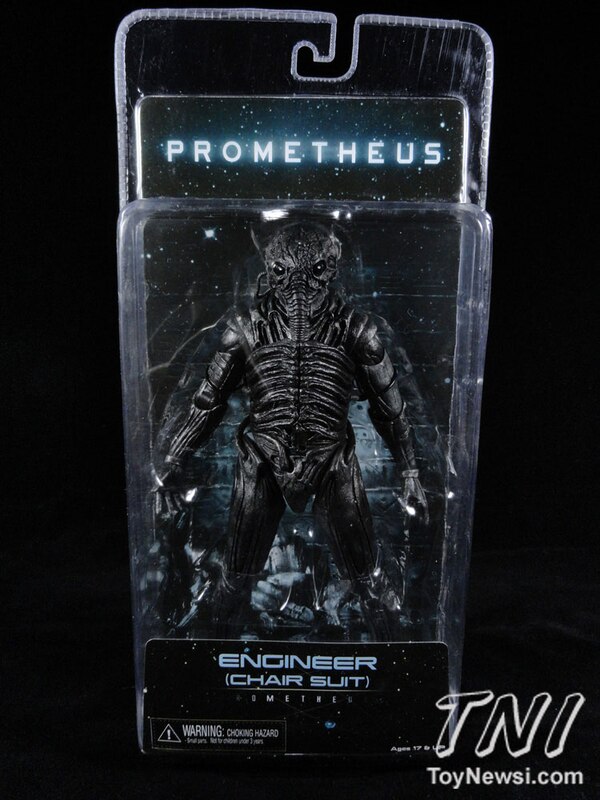 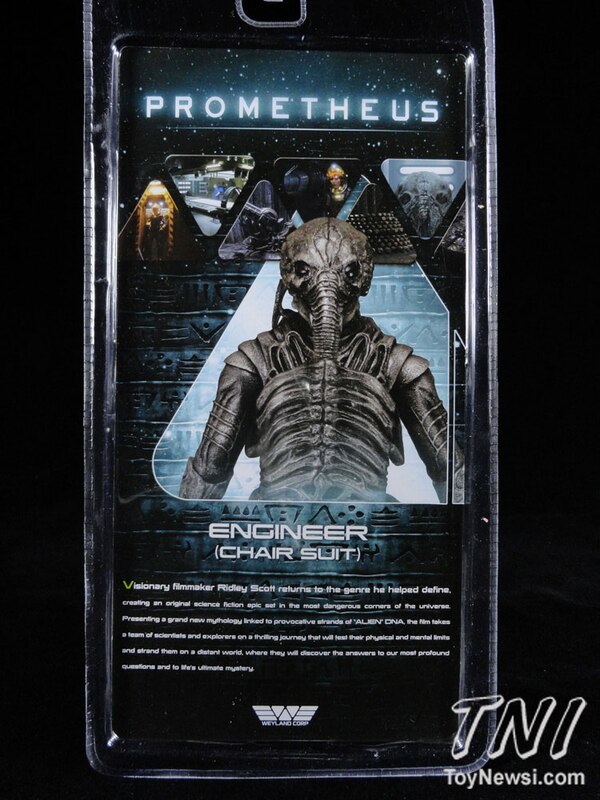 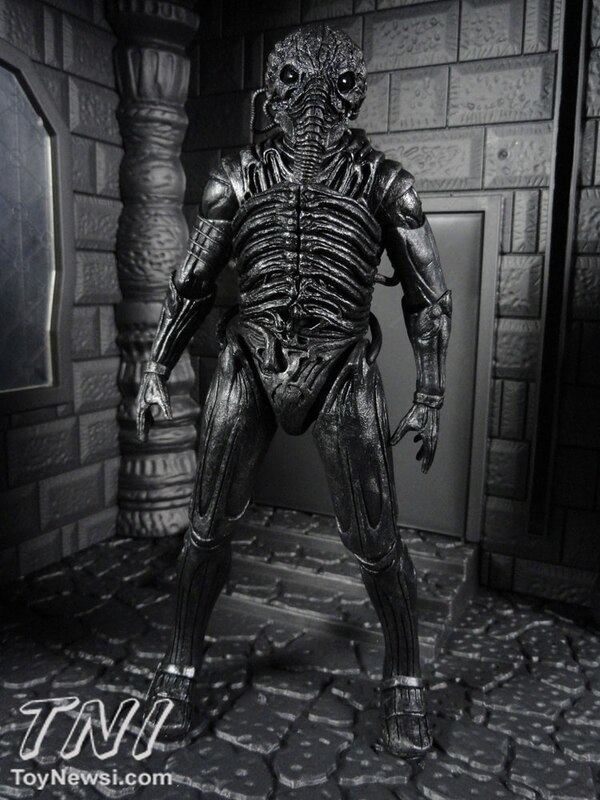 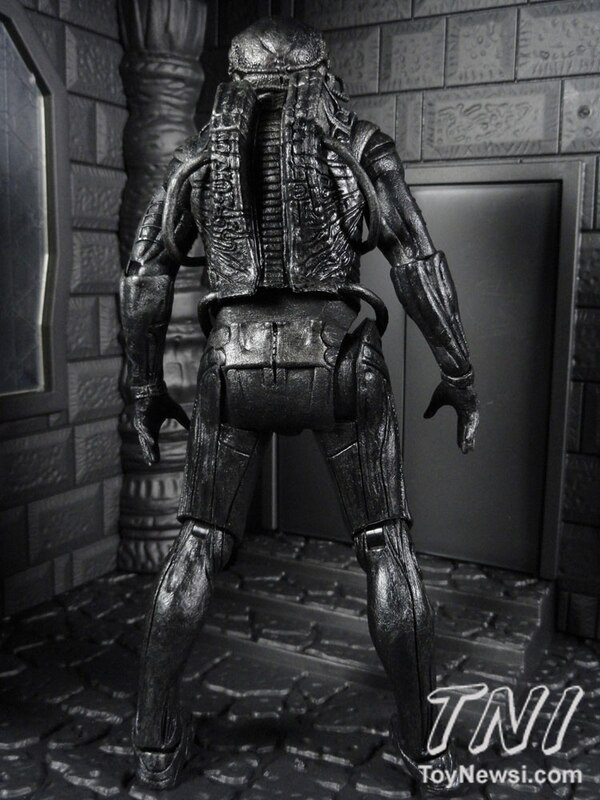 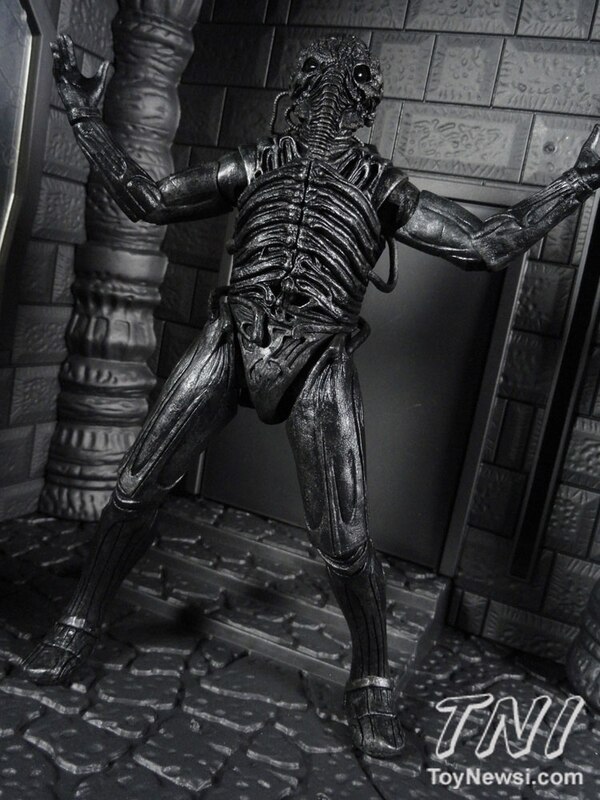 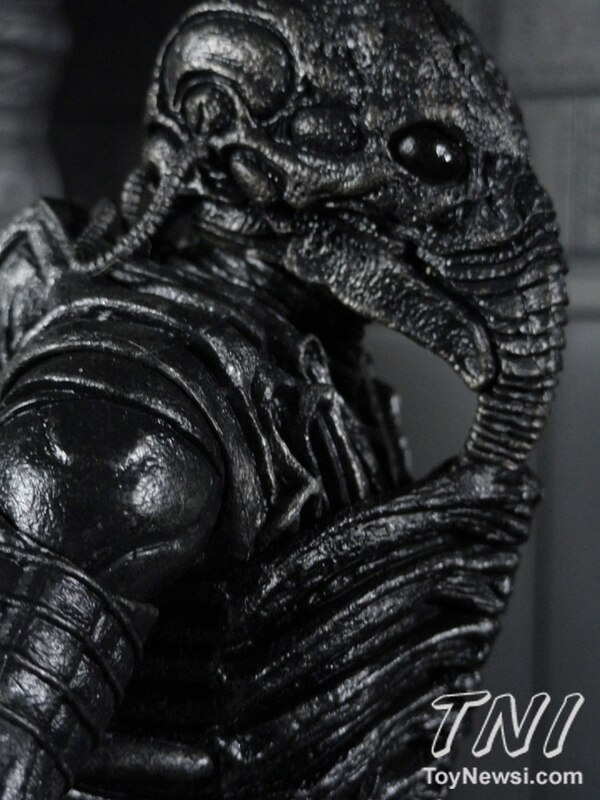 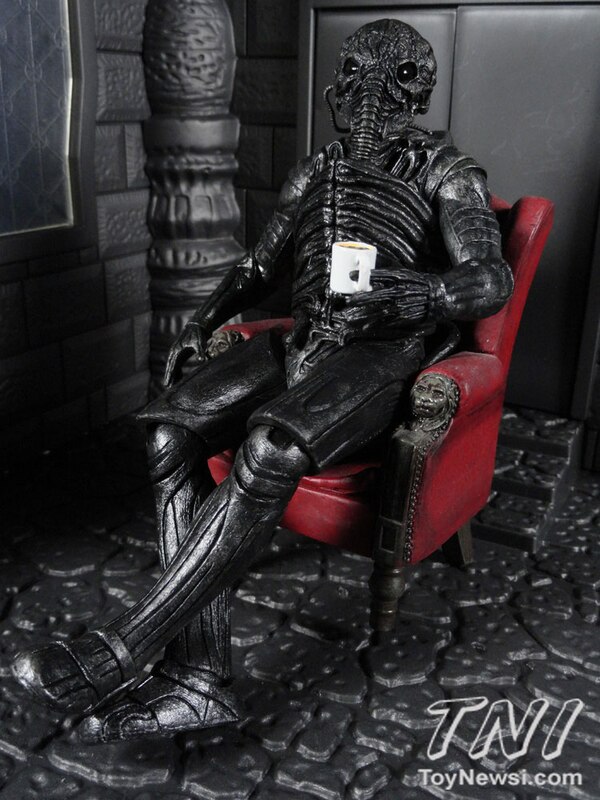 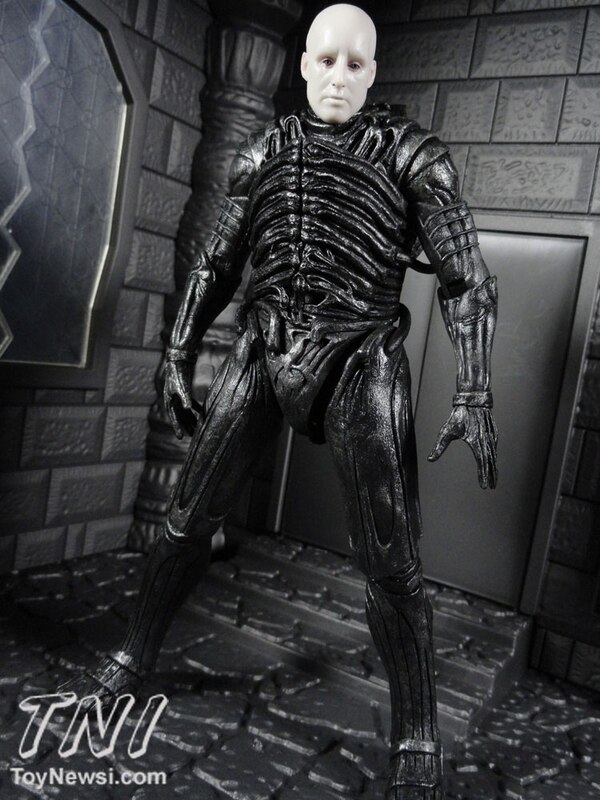 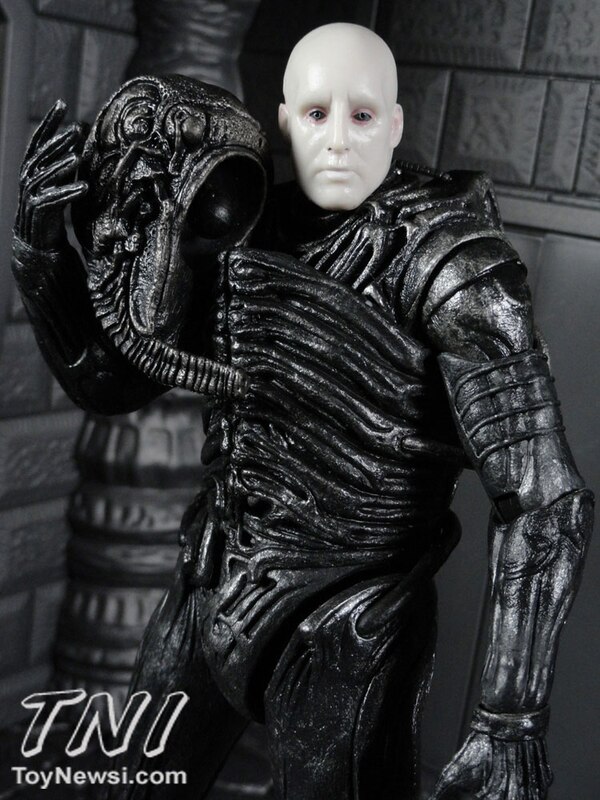 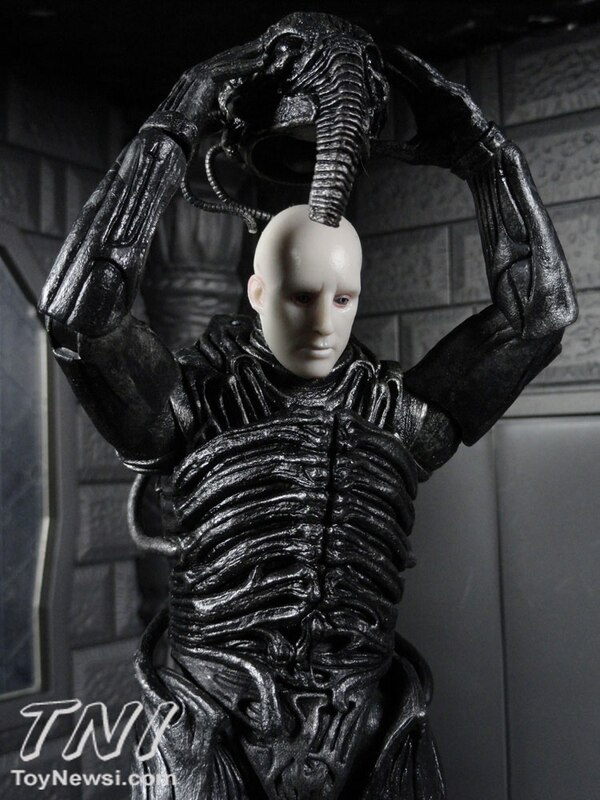