NECA
by Jay Cochran
September 02, 2020
Granted this one is a little bit out of our normal wheelhouse, but it recently came to my attention that something troublesome might possibly be afoot in the world of comic books, and yes there is a action figure connection here, so bear with me.

Artist Tristan Jones has recently made a claim on social media stating that artist Greg Land has traced his work for the cover of the upcoming ALIENS OMNIBUS VOLUME 1 soon to be released by Marvel Comics. If you hadn't heard, Marvel is taking over from Dark Horse Comics the publishing of Alien and Predator comic books, likely due to Disney's recent acquisition of 20th Century Fox who holds the rights to those properties. This upcoming Omnibus is one of the first Alien offerings being put out by Marvel.

For those not familiar, Jones worked on the original 2016 Dark Horse Comic limited-series called Aliens: Defiance as well as doing the packaging art for the NECA action figure based on that same series, hence the action figure connection to this story.

Jones states that Land traced his work for the cover of the upcoming Marvel publication and provided visual proof in his accusation.

If you do a quick google search on artist Greg Land, it doesn't take you long to see this isn't the first time someone has made an accusation of this type against him.

I don't personally follow the inner-workings of the comic book industry enough to know how common a problem this type of thing is, or even if tracing with modifications like the claim states is legally considered plagiarism. I would think it would be, but seeing this isn't the first time Land has been accused of this, and he seems to continue to be employed by a company like Marvel, not to mention Jones is seemingly going to social media instead of seeking out a lawyer, I just don't know. Legal or not it definitely doesn't seem like a very cool thing to do.
Image 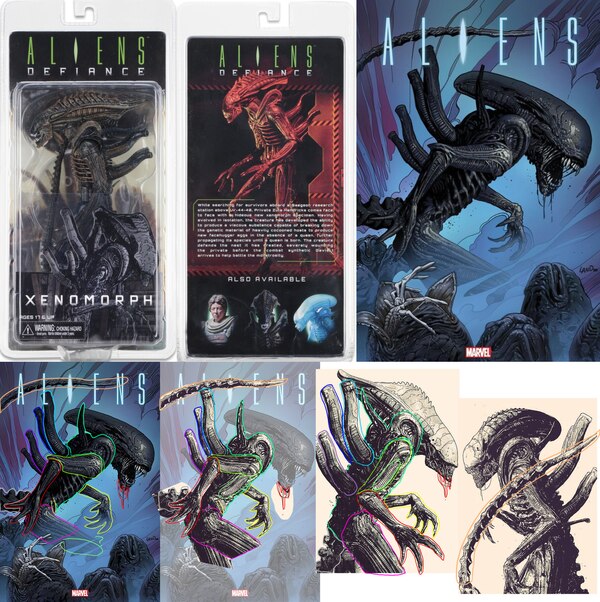 Likely he has establishedstrong relations withMarvel editorial, and Land is still somewhat popular name, so I guess Marvel is ready tooverlook such flaws, but worst thing is that he can really draw, if you check his earlier work at DC for birds of prey, he was pretty good, his style mixed some realism with clear comic book rootsbut then went towards "realism" and even more obvious "tracing" which moremiss than hit, although his Phoenix cover art was iconic. And near his Ultimate fantastic four run it started looking worse and and worse witch each year.

It really baffles my mind that someone like this is able to still get work in the industry. I could see maybe overlooking it if it happened once or twice but from what I have been hearing he is notorious for doing this.

I get the feeling that publishers these days care more about deadlines--and his technique certainly lends itself to speed--than they do about the integrity of the art.

It really baffles my mind that someone like this is able to still get work in the industry. I could see maybe overlooking it if it happened once or twice but from what I have been hearing he is notorious for doing this.

@##@@ Greg Land dude. I used to like this guy's art, until I learned that he did this crap regularly. It's bad enough if you're doing this with your own material (which he's done... A LOT!) but to do this with someone else's work is super messed up. And this isn't even like his 2nd or 3rd time getting busted for this. He's done it repeatedly.

Such is the level of rectitude in the comics industry today. Nobody cares about the integrity of their work. The publishers want nothing more than to churn out more fodder for the movie studios, the artists all want to be rock-stars. Who cares if Land steals from other peoples' work (and yes, it is STEALING), good artists cost money.

I don't even follow today's comic "artists" but even I've heard of this Land yutz and his penchant for "tracing.".

When I was learning my trade, this kind of thing got you fined and possibly drummed out of this business. It certainly got you a reputation as a "tainted" artist.

But here we are. The age of the "knock-off." IP theft is looked on as a virtue nowadays. You can everyone who illegally profits from the hard work of others, 99.99% of YouTube "Content Creators" would disappear.

You're probably not talking about these two, but I remember people trying to give Alex Ross and Tim Bradstreet $#!+ about tracing, but there's a major difference between photographing your own models and working from that and just tracing what you find on the net somewhere or lifting directly from another artist's work.