New TMNT Animated Series The Frogs, Muckman, Rat King And Vernon Images And Info On Turtle Van, Mirage Comics Figures, Plus Are These Getting Easier To Find?!?

NECA
by Jay Cochran
January 05, 2021
So this morning I hit up my local Target. Like every time I go to Target, I make a point to walk by the Entertainment area of the store where they keep the NECA product to see if they have gotten any TMNT product in stock. Usually I don't find jack sh@#t, like I know is the case for many of you out there reading this. This morning however was different. This morning I came across 4 sets of the most recent Splinter and Baxter 2-pack. They actually had 6, but another collector had picked up 2, one for him and one for a buddy.

Now I don't know how long these have been out on shelves at this store, or how long they will remain on shelves. The fact that my store got at least 6 of these 2-packs in as opposed to only 2, well I would say that NECA is improving their distribution for this line finally. I can't say how widespread this is, as I know some areas get more stock than others, but this is the first time I've ever seen any NECA TMNT product on shelves at my local store. Of course with so many key characters having already been released in the line, some might say to little, to late. If NECA is able to really start getting these Turtle sets out in substantial numbers, hopefully at some point they will also be able to go back and re-release some of the older sets, or make them available as a made-to-order kind of thing on their own website.

Other than the lack of availability, this has been one of my favorite new action figure lines to collect, which I've only been able to do thanks to the help of other collectors who were able to find me the ones I wanted and sell them to me at cost. So I really want to see NECA get those distributions number up on these so that anyone who wants to collect it has a reasonable chance of doing so. Up until now, that has not been the case which I know has been very frustrating for many collectors out there including myself. 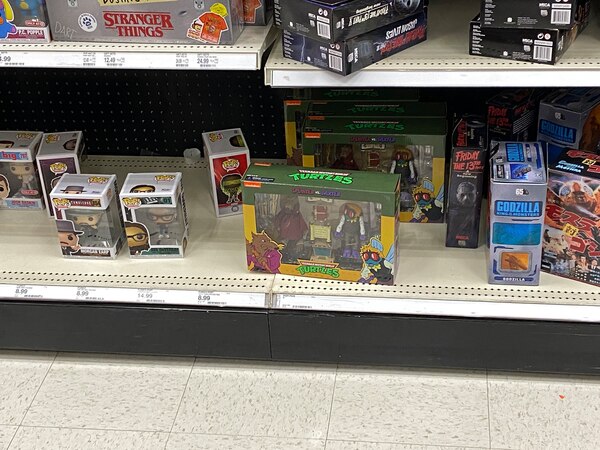 Ok so now for some news on upcoming product. The folks at Fwoosh once again got a chance to talk with the folks at NECA about upcoming stuff. This time they talked with Trevor Zammit who works on the line directly for NECA.

We also got some new images for Muckman and Joe Eyeball which will be in a 2-pack with Mondo Gecko. This 2-pack likely won't be out until after the Chinese Lunar New Year in February,

Finally we get some new updated images for the 4 Frogs which we first told you about right before Christmas. The Frogs will be split up into two 2-Packs. One set will have Napoleon Bonafrog and Attila The Frog. The other set will have Genghis The Frog and Rasputin The Mad Frog. There will probably be some other 2-pack released in-between the two frog ones. Each frog will come with alternate hands and an alternate head.

It was revealed in the interview that Pigeon Pete will be included in the upcoming Turtles in Disguise 4-pack which we also got a preview of right before Christmas. The bandana masks on the Turtles in the 4-pack will be interchangeable with one another so you can basically change the expressions on each Turtles. The fabric pants and coats will be removable as well as the hats. The figures themselves might have a little improved articulation with the ankles and elbows over the original Turtle releases. The set will also have a bunch of extra new accessories.

Ace Duck which was anorther one revealed before Christmas will be packed in a 2-pack with an as-of-yet announced villain character. The Frogs and the set with Ace is wave 6.

The deluxe Chrom Dome will be around 9 1/2 inches and taller than the Krang with Android body, You can see a comparison in the interview video.

The TMNT Van has been sculpted according to Trevor and they are still planning out the sewer playset. The sewer playset will be bigger than the street scene and there should be a manhole type thing to connect the two playsets. Things like the Van and Sewer playset will be sold through NECA's own website. Hopefully the Van will be released in 2021. With have tons of features and details.

Look for four more Turtle figues from the various lines offered through Lootcrate in 2021. 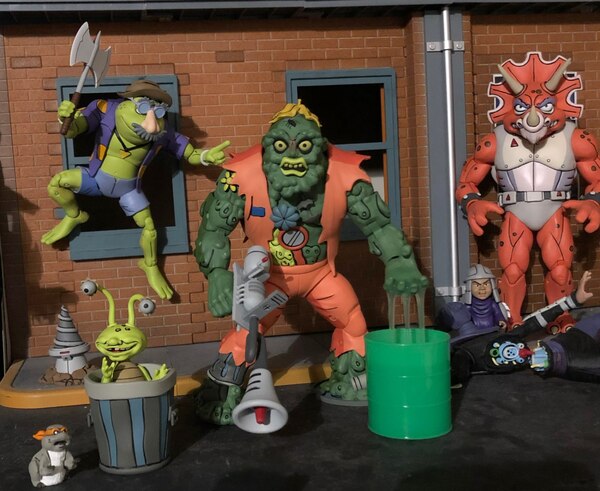 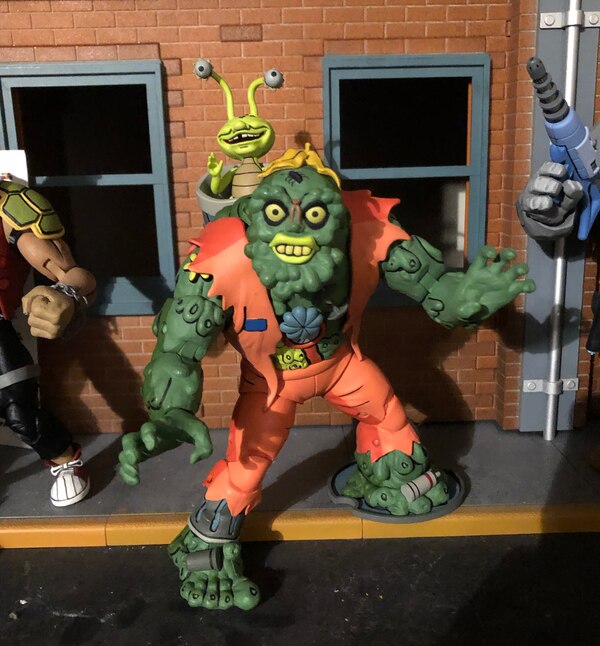 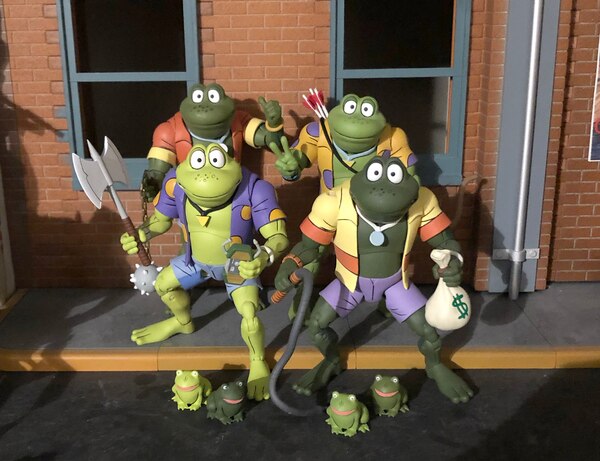 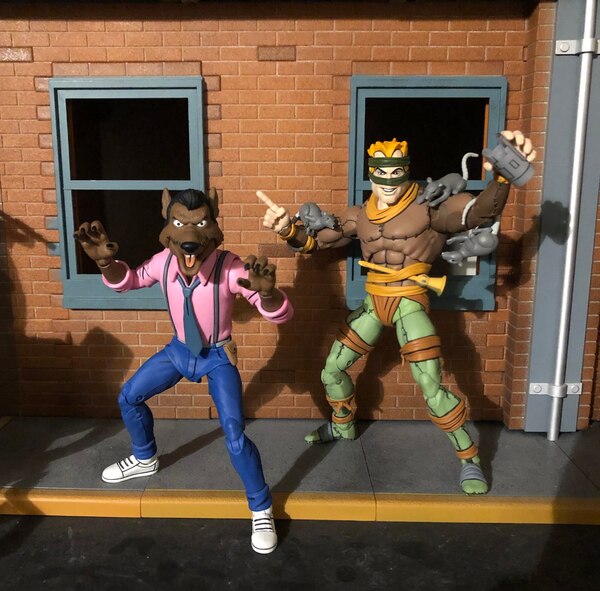 Oh they are releasing the other Frog dudes, I almost had to double take..like wait isn't this already out?, no guess not turns out they are different, it's Napoleon and Attila, weird they didn't mix and match these figs in the pack outs, why both of the same shirt dudes in the same packs. Ah either way.. cool they filled out that team..I guess they look neat all together, I always preferred their looks when each frog was fairly different looking like they were in the 80's toyline, did we ever actually see any other frog other then Genghis or Napoleon though? I know only those 2 got figures, did the other two only get an appearance in the Cartoon? I don't recall anymore.

JayC - 2021-07-06 @ 4:13 pm
Based on the classic 1980s Teenage Mutant Ninja Turtles cartoon series! After being accidentally exposed to radioactive ooze, four ordinary household pets are transformed into a band of wisecracking, pizza-loving, villain-dicing adolescent reptiles! Whether it's facing fierce enemies or saving humanity from near extinction, with the guidance of their Sensei, these Heroes in a Half Shell are always ready for straight outta the sewer action!Designed to be Shredder's amphibian counterparts to the turtles, Napoleon & Atilla join their brothers to complete the team! Swamped with accessories, this two-pack comes with interchangeable heads and hands, money bags, flail, whip, mini frogs, and more! Comes in collector-friendly window box packaging.Look for these to start hitting shelves by August.
LordVenger - 2021-07-01 @ 2:37 am

So for everyone wondering about Chrome Dome episode. He first appeared in the episode Planet of the Turtloids and reappeared once later in.

WARNING: Learned this the hard way. If you have the complete edition of the series like I do you will notice the episode is missing. I was very frustrated by this and checked my friends complete edition and was gone for him. I was actual upset until enough research showed me its actually a bonus episode and its on the last disk as a extra episode. So irritating but hopefully you see this before looking yourself

So for everyone wondering about Chrome Dome episode. He first appeared in the episode Planet of the Turtloids and reappeared once later in.

WARNING: Learned this the hard way. If you have the complete edition of the series like I do you will notice the episode is missing. I was very frustrated by this and checked my friends complete edition and was gone for him. I was actual upset until enough research showed me its actually a bonus episode and its on the last disk as a extra episode. So irritating but hopefully you see this before looking yourself

It's hit or miss to find them in my area like most.

I had to get the sdcc set for an inflated price from BBTS as well as Rocksteady & Bebop off ebay.

I got lucky with Krangs Android Body.

I stopped looking for a while for any releases being bitter about missing April O'Neil and Casey Jones.

I already had Leatherhead & Slash on preorder.

I started again after seeing Splinter and Baxer Stockman on multiple occasions in the wild. I skipped the Triceratons not knowing if I could get the other, got the 1st half of the Punk Frogs and the Turtles in Disguise.

Vernon and Rat King and the 2nd half of the punk frogs are high on my list.

A rerelease of April O'Neil above all offered through NECAs webstore is on the top of my wants. If that doesn't happen, the Super7 version willstand in because the current aftermarket price is too ridiculous imho.

Man Chrome Dome is HUGE! These figs always impress me. I always go back and forth about collecting but it really feels like a crapshoot as well as too late to start, especially on limited budget. But man they are sooooooo neat to see be made.

Man Chrome Dome is HUGE! These figs always impress me. I always go back and forth about collecting but it really feels like a crapshoot as well as too late to start, especially on limited budget. But man they are sooooooo neat to see be made.

I how many episodes the guy was in? I don't recall him much so I'm not getting it...

I really don't recall Chrome Dome being so huge, I guess he must have been in the show, but I honestly don't remember because I think he showed up in a later season, like after season 4 (someone who knows tell me!) either way I had the OG playmates figure and well I guess that was highly inaccurate because he was the same size as everyone else.

looks damn good though, probably the only figure yet in this toon series I kinda want to buy.

I completely forgot about this character until NECA showed him again but I seem to vaguely recall wanting him as a kid after seeing the episode. Definitely picking him up if he shows up around me.