McFarlane
by Outsiders
July 15, 2011
The tenth anniversary of the Halo franchise is coming this November, and McFarlane Toys is celebrating by bringing you even more Halo action figures!

In addition to this fall's Halo: Reach Series 5, we'll be releasing a special bonus series commemorating this milestone moment. Our Halo: Anniversary line consists of new and updated figures from the entire range of Halo video games, from 2001's Halo: Combat Evolved through 2009's Halo 3: ODST.

Halo: Anniversary's diverse lineup includes a unique, low-polycount version of Master Chief as he appeared in the very first Halo game; an all-new figure of Dutch to supplement your ODST collection; an updated version of the Arbiter in Halo 2-style silver armor; a new color of Halo 3 Grunt; and a second chance to get the hard-to-find Cortana figure, originally released in limited quantities back in 2008.

To make this series even more special, each figure comes with a piece of our very first Halo build-a-figure! OK, it's not really a "figure," but it's something all Halo fans recognize: the iconic skull-and-crossed swords emblem that represents the player's selected level of difficulty! The more pieces you collect, the higher the difficulty your plaque will show. Get just the two halves of the plaque to represent Easy difficulty, add a sword or two to bump it up to Normal or Heroic, and finish it off with the Elite skull to make your emblem truly Legendary.

Joining the five-figure assortment is a pair of boxed three-packs. Our Master Chief Evolution set showcases the star of the Halo trilogy, while the Fearless Leaders collection highlights the field commanders of Halo Wars, Halo 3: ODST, and Halo: Reach.

Master Chief (Halo: Combat Evolved)
This all-new figure portrays the hero of the Halo trilogy just as he appeared in the game that started it all: 2001's Halo: Combat Evolved. The stylized, angular design is sure to remind long-time fans of how he appeared when he was first introduced ten years ago. This newest Master Chief is larger than our Halo 3 figures, and is perfectly in scale with our recent Halo: Reach collection. Figure comes with Assault Rifle, Frag Grenade, and the left half of the "Easy" Difficulty Plaque.

Dutch (Halo 3: ODST)
The heavy weapons specialist of Buck's ODST squad joins our action figure lineup: Corporal Taylor H. Miles, better known as "Dutch." This new figure is in scale with our previous Halo 3: ODST figures, so Dutch won't look out of place with his teammates. Figure comes with Dutch's signature weapon, the Spartan Laser. Dutch also comes with a Frag Grenade and the right half of the "Easy" Difficulty Plaque.

Cortana (Halo 3)
Originally released back in 2008 in our very first series of Halo action figures, Cortana returns for the 10th Anniversary of the Halo franchise. This figure features clear blue plastic and a light-up base to represent her holographic appearance. Cortana also comes with a knife for the Difficulty Plaque that can be added to upgrade it to "Normal" difficulty.

Arbiter (Halo 2)
Another classic character from our earliest Halo lines returns for the 10th Anniversary: the Arbiter, originally from Halo 3 Series 2. Thel 'Vadam comes with the ceremonial armor of the Arbiter rank, a Covenant Energy Sword, and a Plasma Grenade. Figure also comes with the second knife for the Difficulty Plaque, upgrading it to "Heroic" level.

Grunt (black) (Halo 3)
The ever-popular Unggoy Grunts come in many colors and ranks, and the Halo Anniversary series introduces a new figure is clad in dark, stealthy gray armor, and comes with a Fuel Rod Gun and a Plasma Grenade. If you're collecting all the pieces of the Difficulty Plaque, this small figure comes with a big bonus: the Elite skull that finishes the emblem and upgrades it to “Legendary” status.

Difficulty Plaque (Halo series)
The Difficulty Plaque is our very first Halo "build-a-figure" item. This iconic symbol has been featured in every Halo game, and is the perfect emblem to celebrate ten years of Halo. The Difficulty Plaque is only available by collecting these special Anniversary figures, and the more you collect, the higher the difficulty you can create! The completed plaque measures approximately three inches tall, and comes with attachments for displaying it on a desk or hanging it on a wall.

Master Chief Evolution 3-Pack
The star of the Halo trilogy has evolved quite a bit over the past decade, and the Master Chief Evolution 3-Pack covers his three best-known versions. Representing the first Halo game is the Halo: Combat Evolved Master Chief. Figure includes Mark V armor, Assault Rifle, Frag Grenade, and a unique "low polygon count" design. Straight from the cover of the second game is our Halo 2 Master Chief, with Mark VI armor, dual-wielded SMGs, and a Frag Grenade. Finishing the fight is the Halo 3 Master Chief. This figure includes battle-damaged Mark VI armor, a Sniper Rifle and a Frag Grenade. As an added bonus, both the Halo 2 and Halo 3 versions have been recreated at a larger size to fit in perfectly with the Halo: Combat Evolved Master Chief and our recent Halo: Reach figures.

Fearless Leaders 3-Pack
Master Chief may be the most well-known leader of the Halo series, but fans know he's not the only one. The "Fearless Leaders" 3-pack celebrates a trio of other bold heroes from the blockbuster Halo games. Representing Halo 3: ODST is the leader of its Helljumper squad, Gunnery Sergeant Edward Buck. Buck features his signature Assault Rifle and comes with a removable ODST helmet. The real-time-strategy game, Halo Wars, introduced several new leaders to the Halo universe, including the UNSC Marine, Sergeant John Forge. Forge features his forest camouflage armor and Shotgun. The latest game, Halo: Reach, introduced players to the Spartan-IIIs of Noble Team, and their leader, Carter. The Fearless Leaders 3-pack includes the original helmeted version of Carter with his Designated Marksman Rifle and a Frag Grenade.

Can't wait until October? Neither can we! McFarlane Toys is kicking off the celebration early, with an "advance wave" of Anniversary figures hitting the shelves of major retailers in late July! For this preview line, we're bringing back four figures from our very first Halo game license, Halo 3. Halo Anniversary - Advance consists of:

Spartan Recon (team red)
The most highly-sought after armor of Halo 3 makes a return to store shelves, this time, in classic "team one" red. Comes with Plasma Rifle. Figure also includes the deactivated Energy Sword hilt accessory, previously only available with the SDCC-exclusive Grifball figure.

ODST
The ever-popular Orbital Drop Shock Trooper, first released back in Halo 3 Series 2, drops in with an updated paint scheme that now includes the white stripes on the shoulder armor. Figure is equipped with a Battle Rifle.

Elite Combat (purple)
The classic Combat armor and the classic Covenant purple color scheme combine to create the definitive Elite action figure. Is this Sangheili warrior a frightening new enemy, as in Halo: Combat Evolved Anniversary, or a powerful new ally of humanity, as in Halo 3?

Halo: Anniversary - Advance will be in Walmart and Target stores in late July. This teaser line is being produced in lower quantities than the full Anniversary line, so if you see them, act fast!
Image 1 of 27 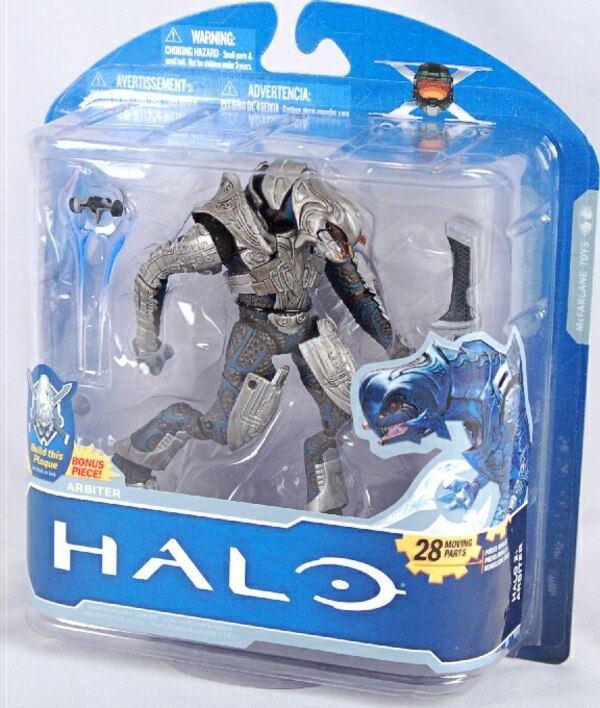 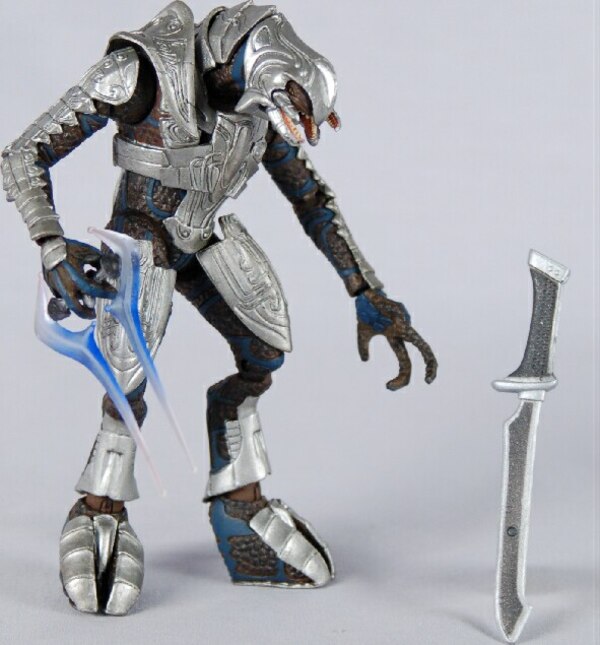 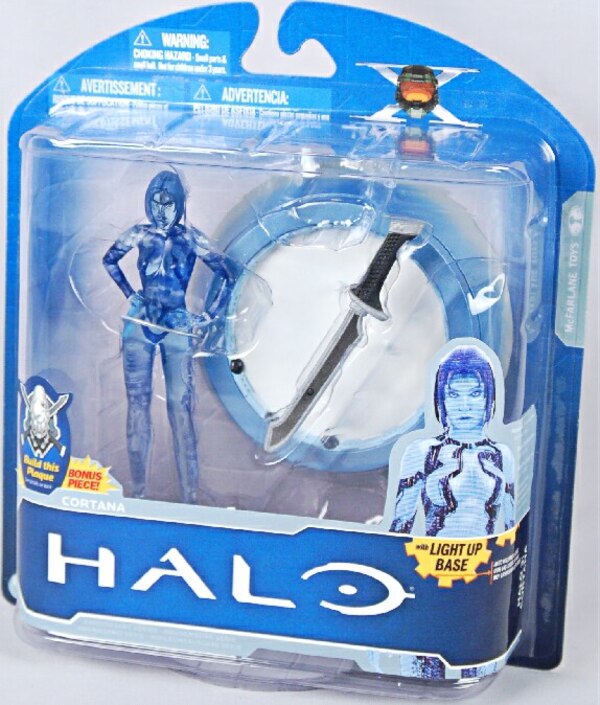 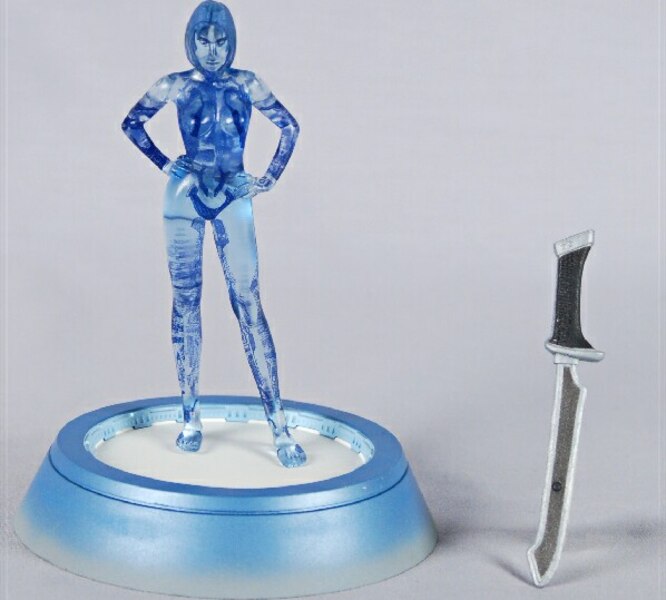 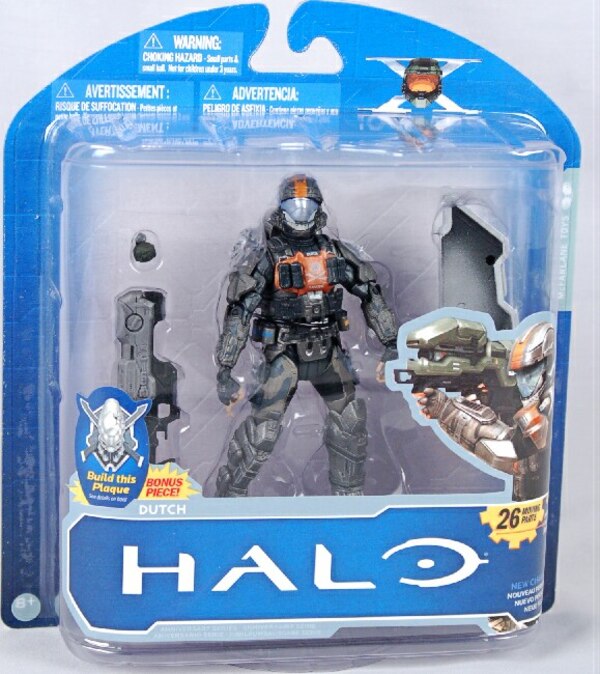 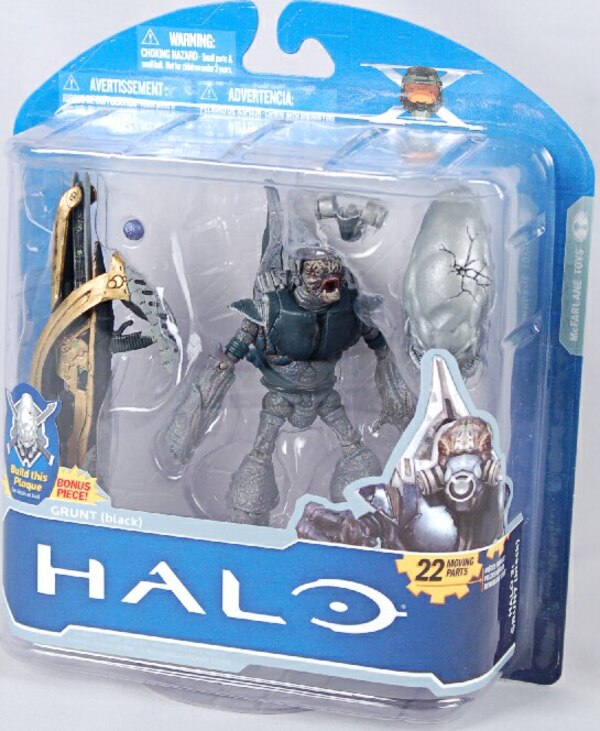 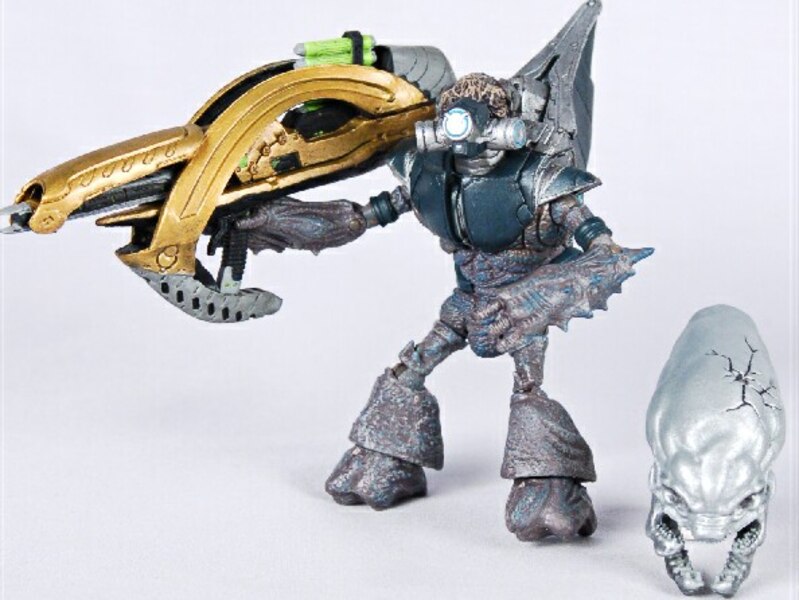 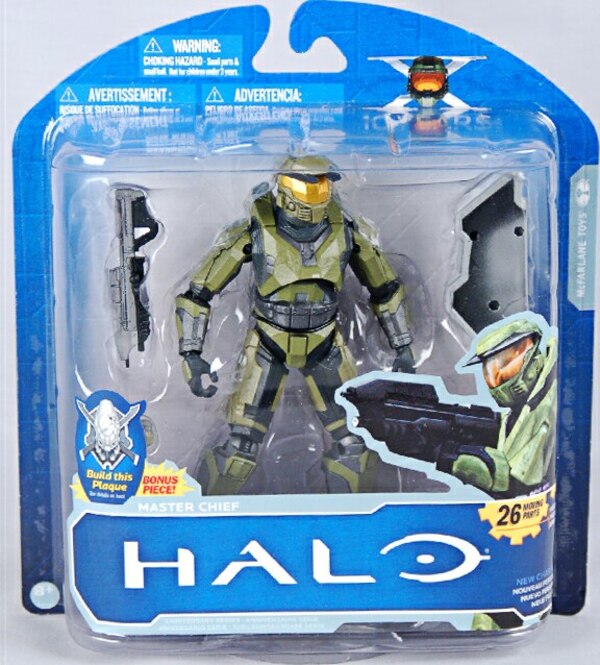 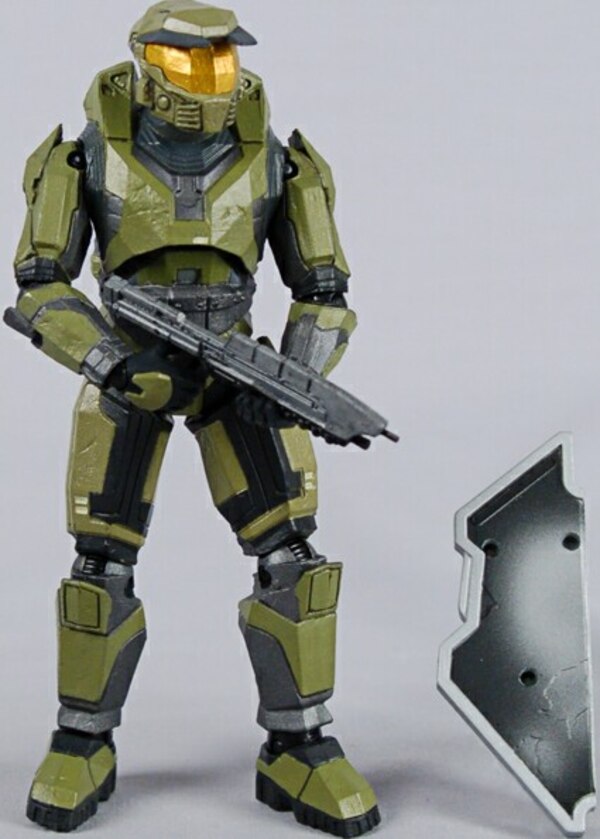 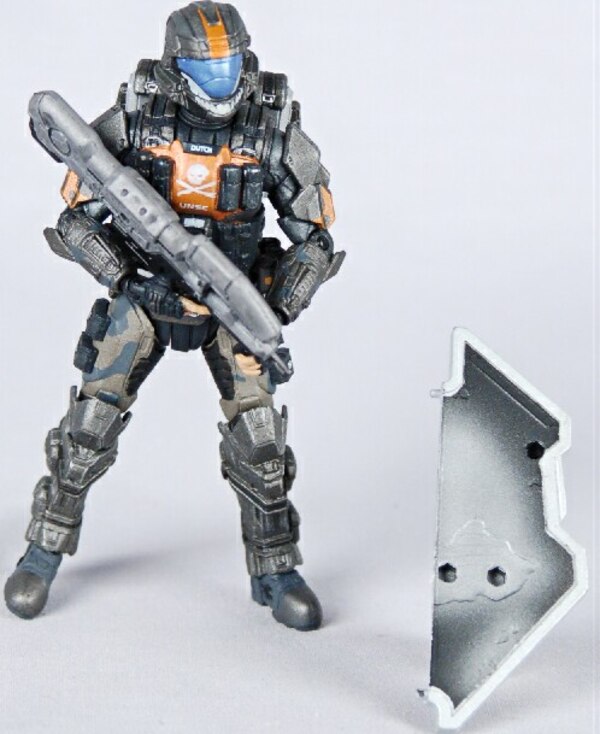 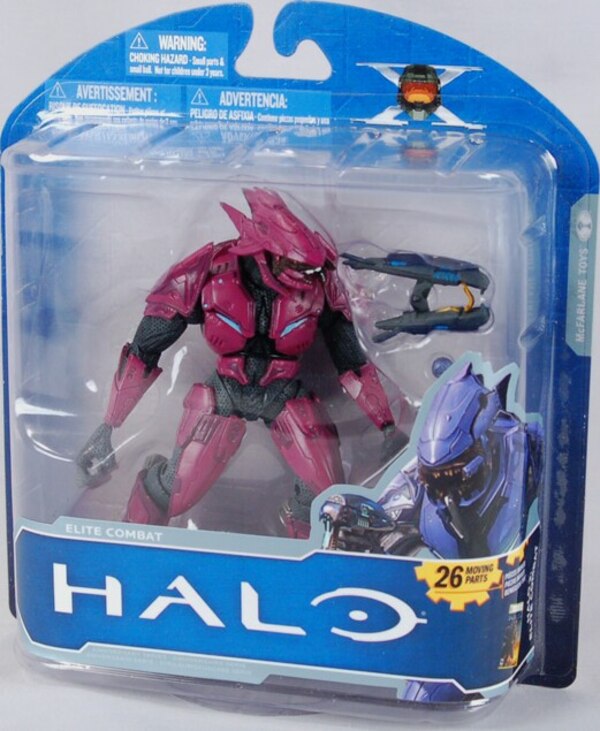 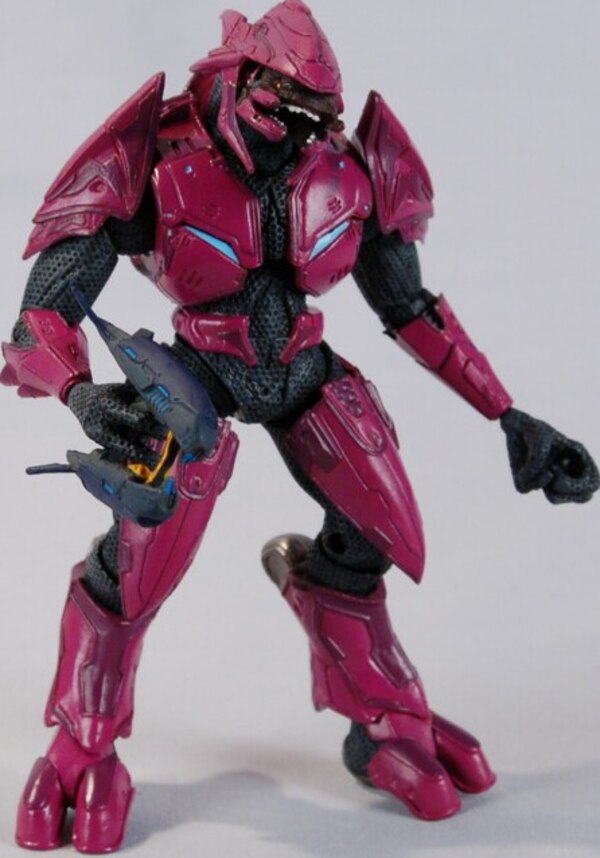 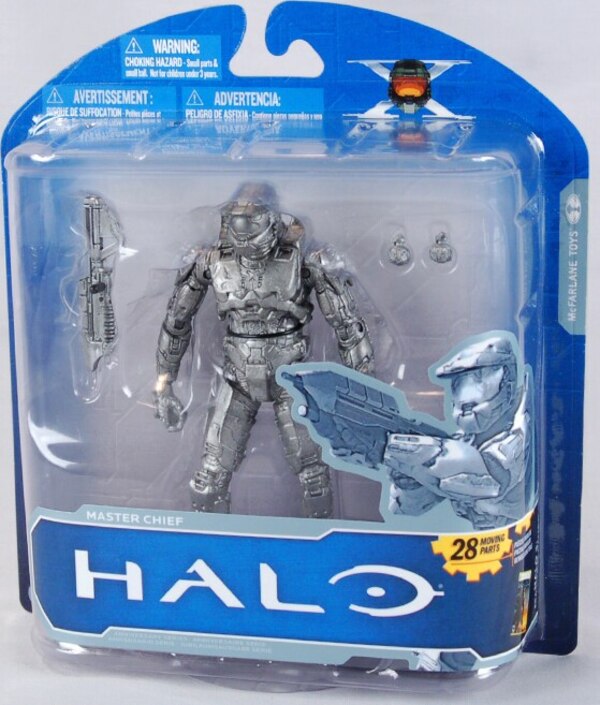 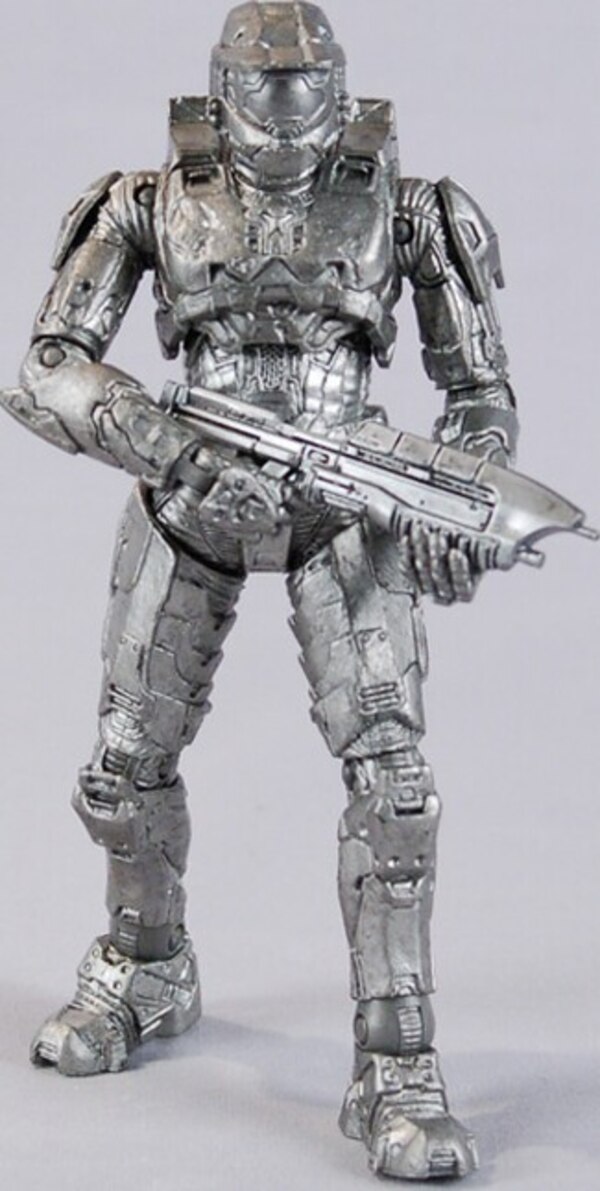 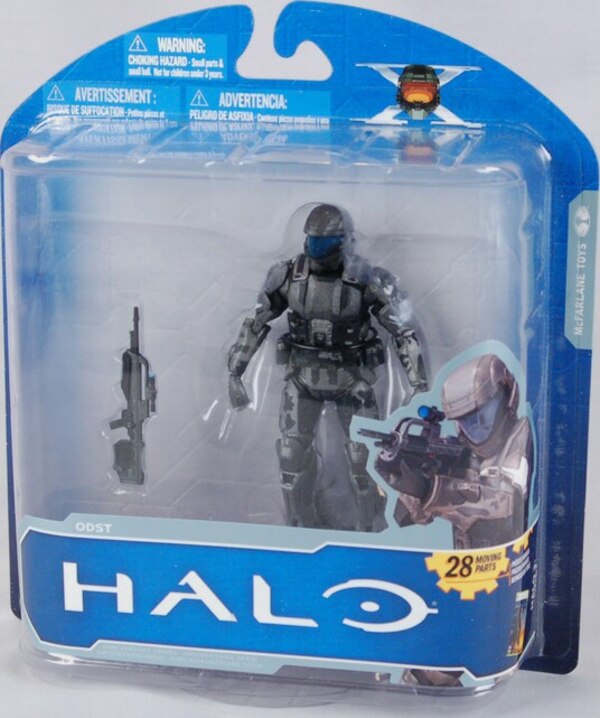 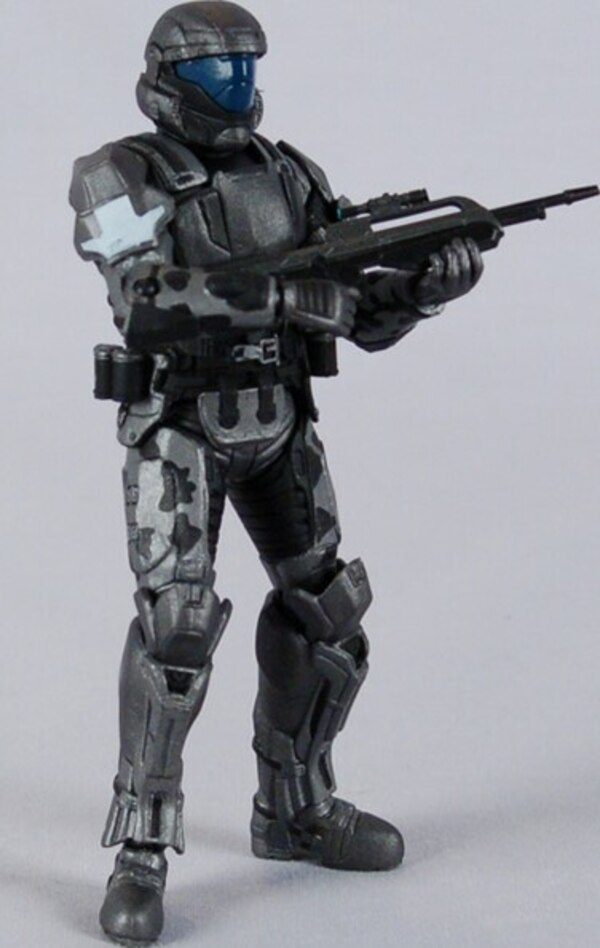 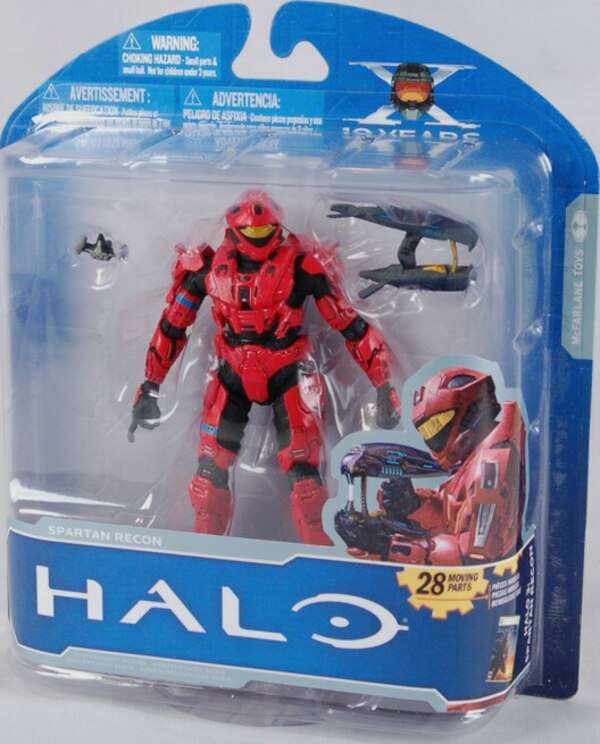 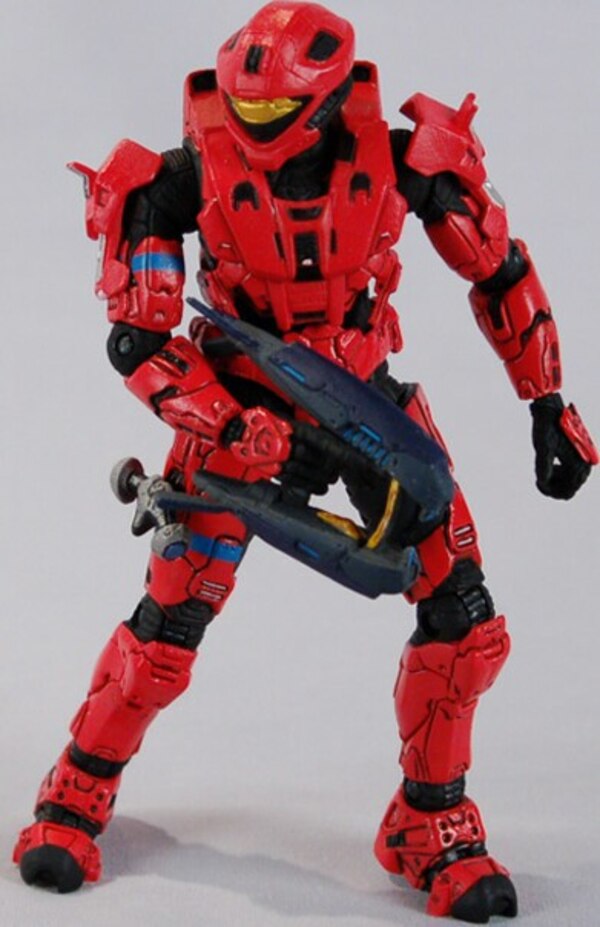 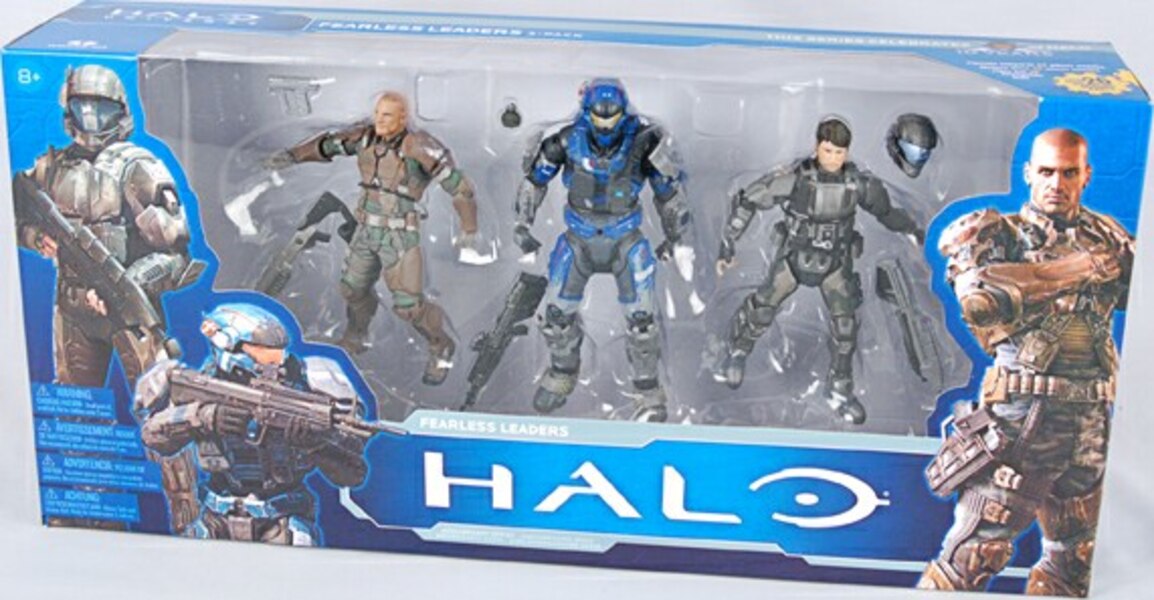 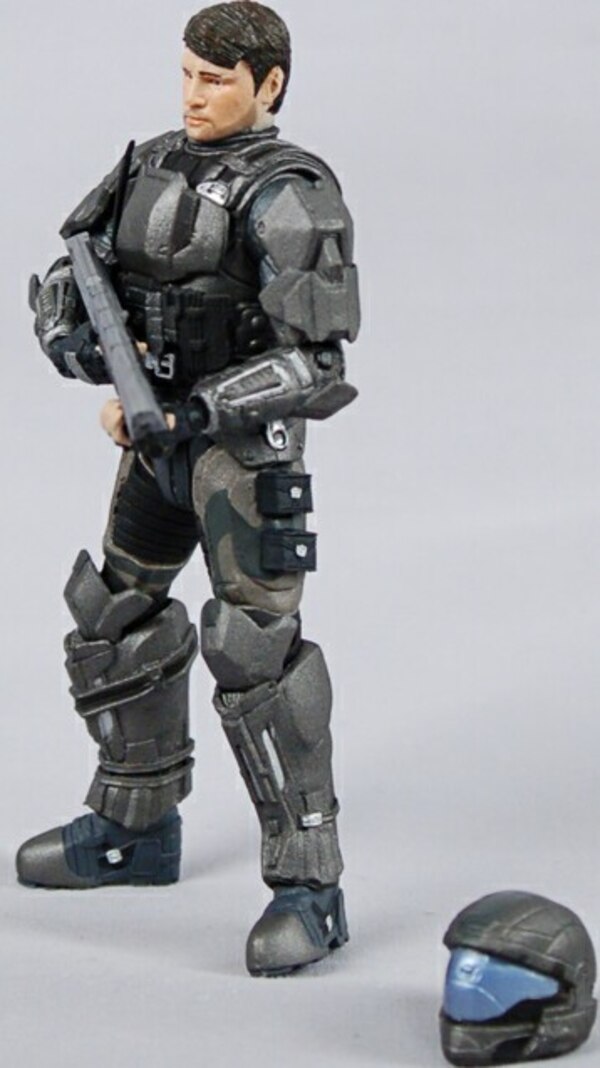 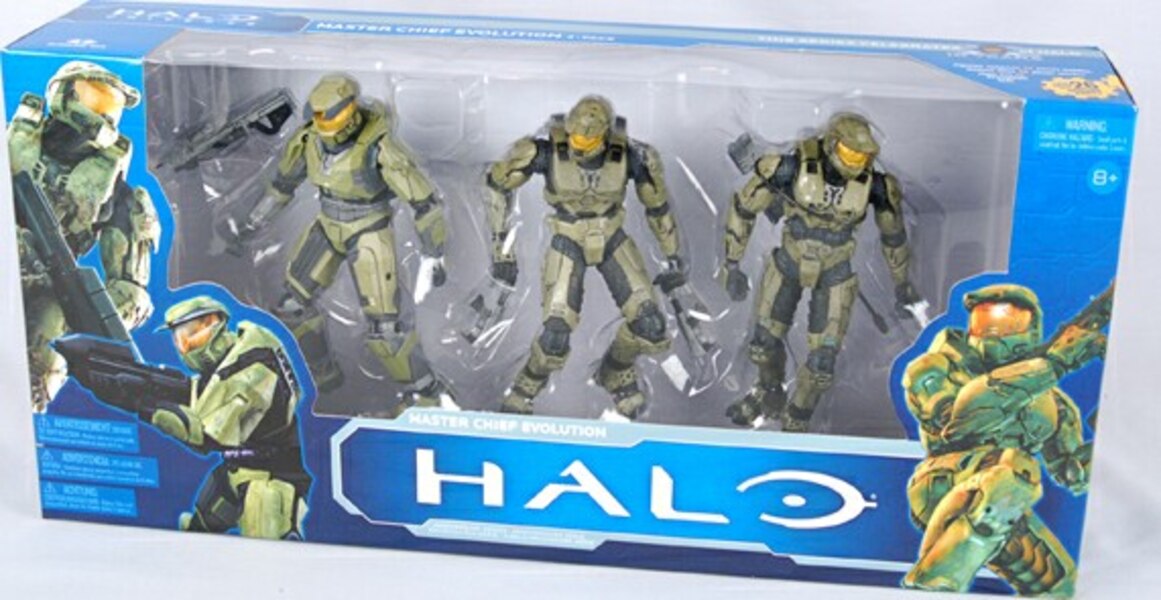 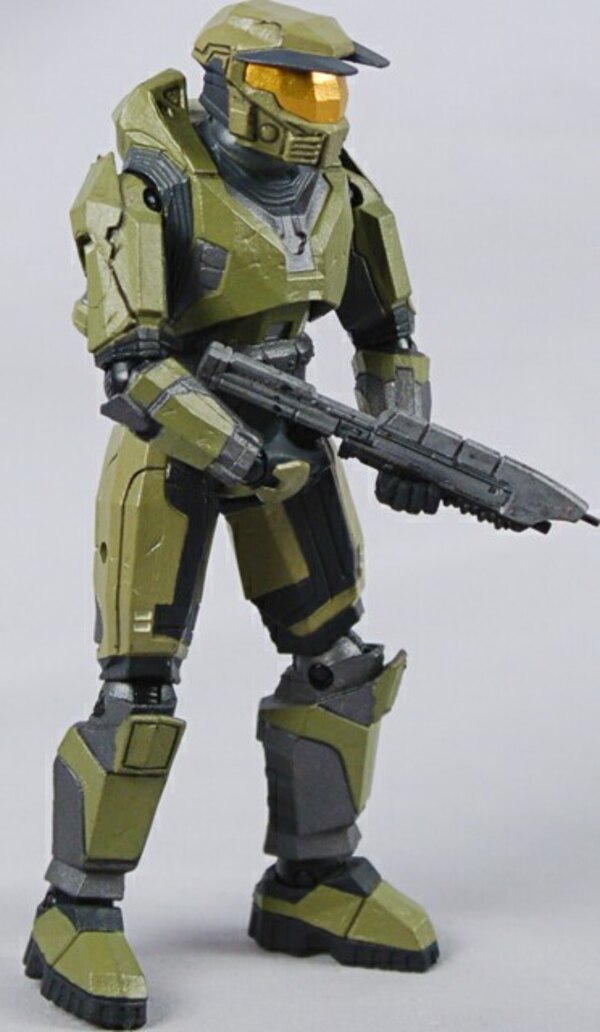 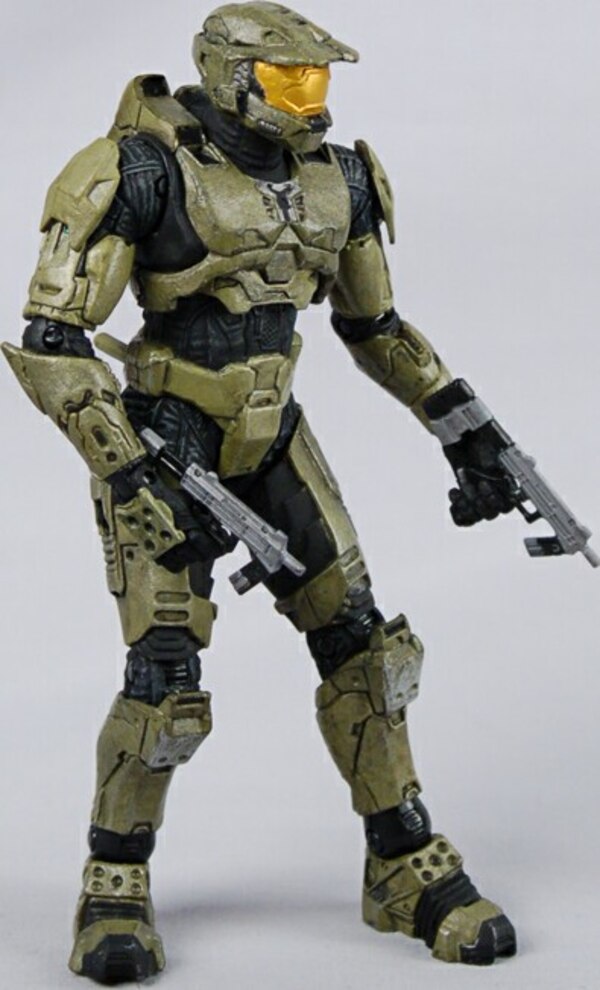 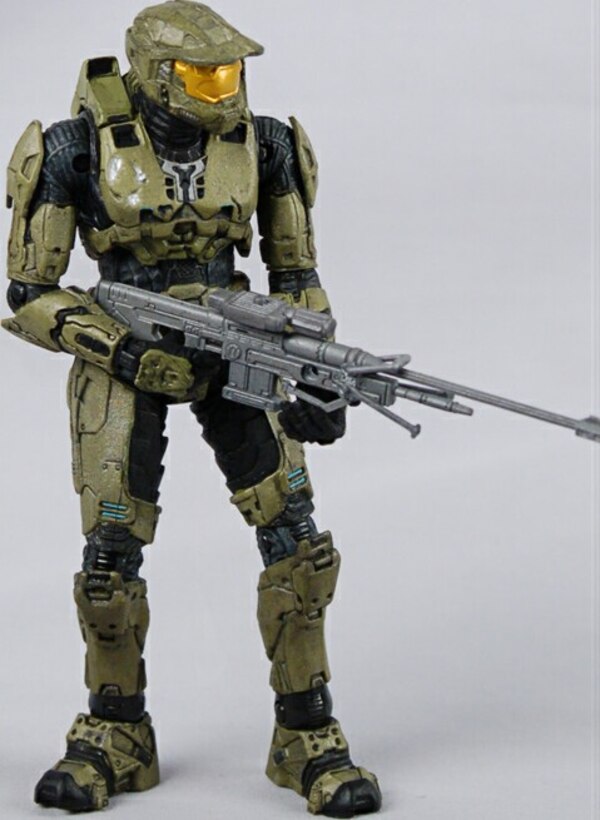