McFarlane
by Jay Cochran
July 05, 2016
Naruto Uzumaki wants to be the best ninja in the land. He's done well so far, but with the looming danger posed by the mysterious Akatsuki organization, Naruto knows he must train harder than ever and leaves his village for intense exercises that will push him to his limits.

Two and a half years later, Naruto returns to find that everyone’s been promoted up the ninja ranks—except him. Sakura’s a medic ninja, Gaara’s advanced to Kazekage, and Kakashi…well, he’s the same. But pride isn’t becoming of a ninja, especially when Naruto realizes that Sasuke never returned from his search for Orochimaru. Plus, the mysterious Akatsuki organization is still an ever-present danger. As Naruto finds out more about the Akatsuki’s goals, he realizes that nothing in his universe is as it seems. Naruto is finding that he’s older, but will he prove wiser or stronger?

NARUTO
● 7-inch figure of one the most popular anime characters ever, complete with stylized display base
● Figure comes with 2 Kunai Knives and multiple articulation points, for full customization
●Sculpted in his iconic outfit from the Naruto Shippuden television show
● Keep an eye out for additional Naruto Shippuden figures to come

You can pre-order this figure now from BigBadToyStore.com.
Image 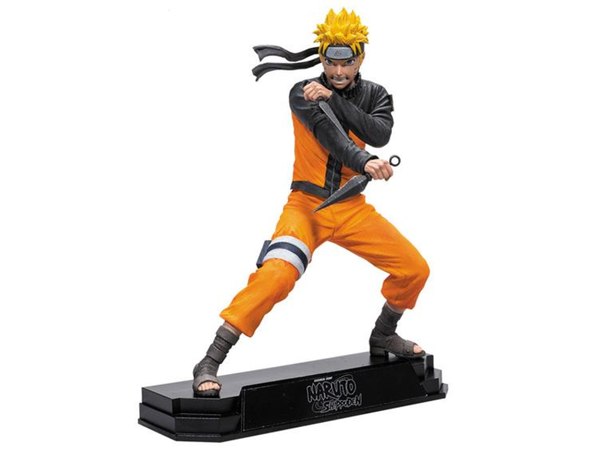