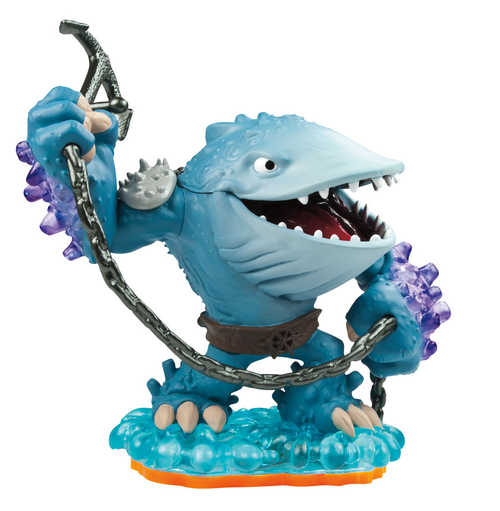 Thumpback is a water element giant. He was once a crew member of The Phantom Tide, the most fearsome pirate ship in all of Skylands. But the actual pirating part about being a pirate didn't interest Thumpback so much as the benefits that came with traveling on a large ship. After all, his real passion was fishing. But when his chance came to finally ensnare the most elusive creature in the sky - the Leviathan Cloud Crab - he was pulled over board and carried off into the horizon. This was actually quite fortunate, because sometime later The Phantom Tide and its entire crew were banished to the Chest of Exile. Thumpback's pirating days were over, but his legend as one of the first Skylanders had only just begun. 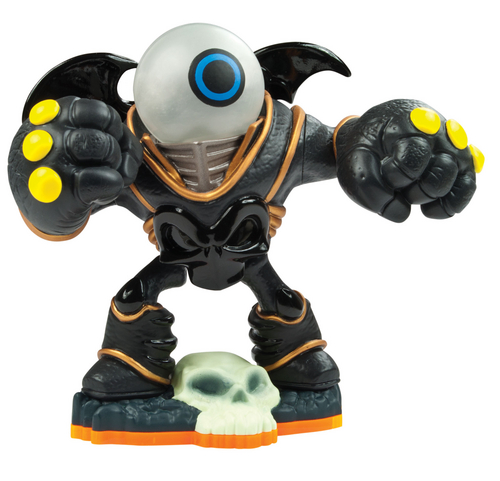 Eye-Brawl is an undead element giant. Throughout history, there have been many epic battles, though none more bizarre than the legendary brawl between the headless giant and the infamous flying eyeball. It all started with a staring contest, but with the headless giant having no eyes and the flying eyeball unable to blink, it soon escalated into an all out war as the two rivals fought fiercely throughout the land of the undead for over a hundred years! With neither opponent backing down, the two combatants were eventually struck with the realization that if they were to combine their formidable powers, they would be a force to be reckoned with. By teaming up, the infamous flying eyeball and the headless giant became known as Eye-Brawl - one of the most powerful Skylanders ever known!

Skylanders Giants builds upon the breakthrough fundamentals of the Skylanders Spyro's Adventure-- merging the physical and virtual realms with an innovative line of cross-platform toys with "brains," which players everywhere can magically bring to life in the world of Skylands. Using the mystical Portal of Power, players once again lead a team of heroic Skylanders in a new adventure to save their world. Portal Masters will journey through new areas of Skylands, encountering new enemies, solving fun puzzles, overcoming different hazards and obstacles, and finding a variety of collectable rewards and treasure. Skylanders Giants introduces sixteen new characters to build on the magic of Skylanders Spyro's Adventures, including super-sized giants with powers to match, as well as the new LightCore Skylanders that light-up in the game and in the real-world as players transport them to Skylands using the Portal of Power. Additionally, the game features new Hero Challenges, more Battle Mode gameplay, and advanced integration across console, handheld, mobile and Skylanders Universe. Skylanders Giants is now available for Wii, Wii U, PS3, Xbox 360 and Nintendo 3DS.
Image 1 of 4