Diamond Select
by Jay Cochran
October 06, 2016
Diamond Select Toys is bringing their full array of products to New York Comic-Con, including nearly all of their in-development prototypes! Check out the display cases at booth 1644 to see upcoming action figures, Minimates, busts, statues, banks and kitchenware from such properties as Marvel, DC, Ghostbusters, Nightmare Before Christmas and more! Below is a selection of the upcoming DST items on display, with even more making their debuts at the show! If you’re on the show floor, swing by and visit! 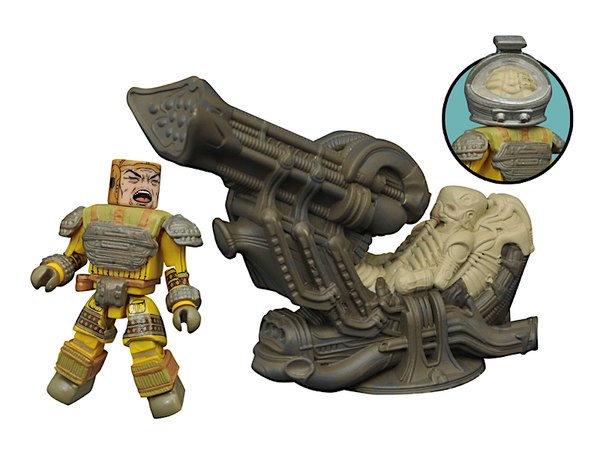 A Diamond Select Toys release! When a Minimate set gets this big, it can only be called Deluxe! The Aliens Deluxe Minimates line continues with a third Deluxe release, the Alien Space Jockey, as seen in the 1979 film that started it all! This Minimates-style diorama piece measures over 4 inches tall and comes with an exclusive 2” Minimates mini-figure of Nostromo crew member Kane, wearing his environmental suit with melted face plate, plus multiple alien eggs. Kane is fully poseable with 14 points of articulation, a removable helmet and interchangeable parts, including a facehugger alien! Fully compatible with all Alien and Predator Minimates. Packaged on a full-color blister card. (Item #OCT162586, SRP: $14.99) 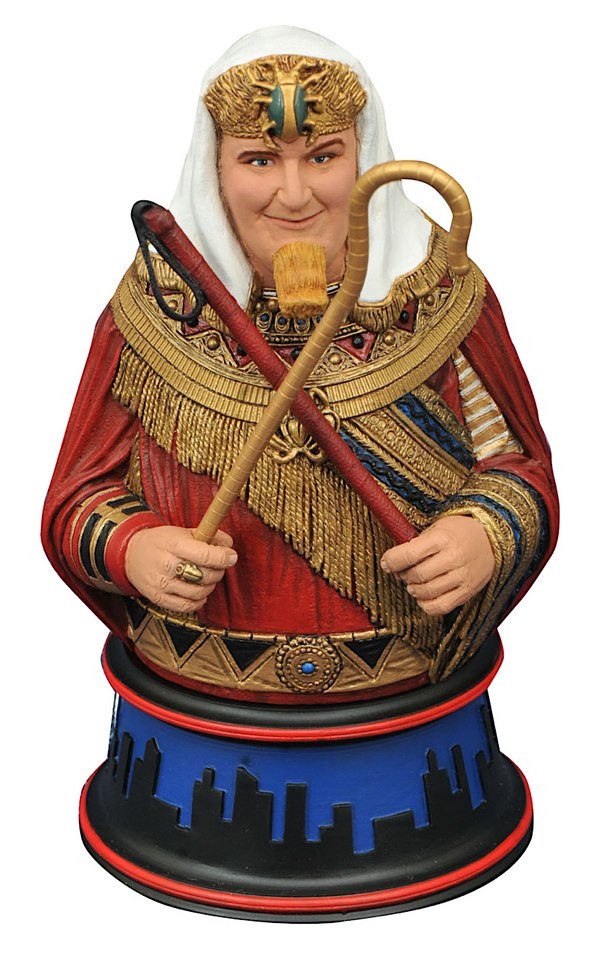 A Diamond Select Toys release! Calling all Tutlings! The Nabob of the Nile, the Moon God of Thoth, King Tut is the newest Bat-villain to break into DST’s hit line of resin busts based on the Batman Classic TV Series! With his crook and flail in hand, the self-styled Pharaoh of Gotham sits atop a pedestal based on the show’s classic opening animation, and measures approximately 6 inches tall. Limited to only 3,000 pieces, it comes packaged with a certificate of authenticity in a full-color box. Sculpted by Jean St. Jean! (Item #OCT162585, SRP: $59.99) 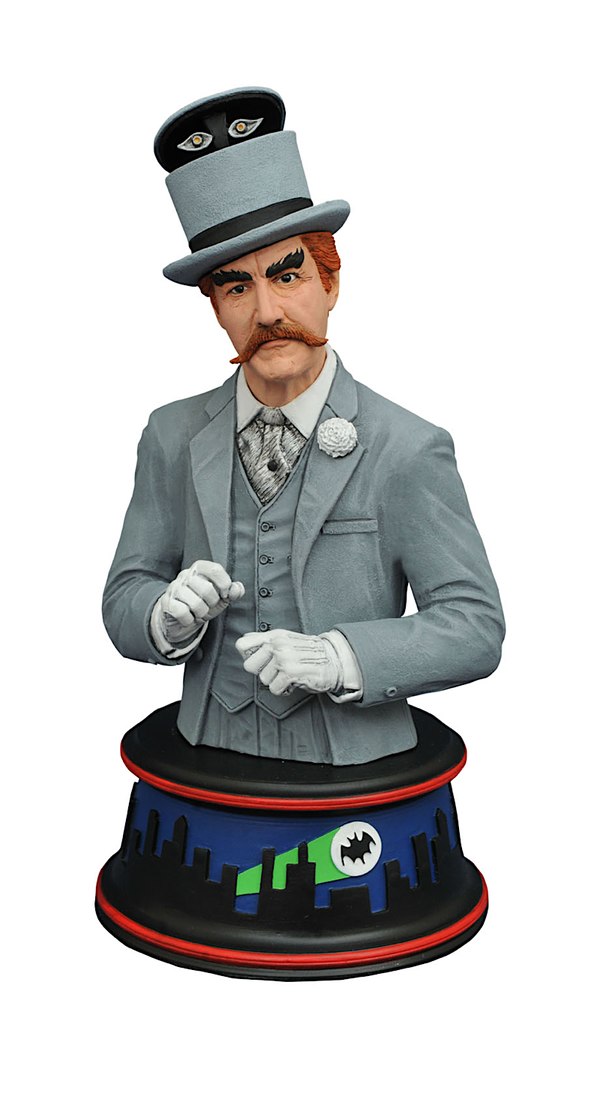 A Diamond Select Toys release! Holy headgear, Batman! This all-new resin bust based on the Batman Classic TV Series depicts none other than the Mad Hatter, Jervis Tetch! With his unhealthy obsession with helmets and his hypnotizing top hat, TV’s Tetch was one of the most unusual of Batman’s classic TV foes, and that’s really saying something! This resin bust measures approximately 6 inches tall atop a pedestal inspired by the show’s animated opening credits. Limited to 3,000 pieces, it comes packaged in a numbered full-color box with a numbered certificate of authenticity. Sculpted by Jean St. Jean! (Item #SEP162530, SRP: $59.99) 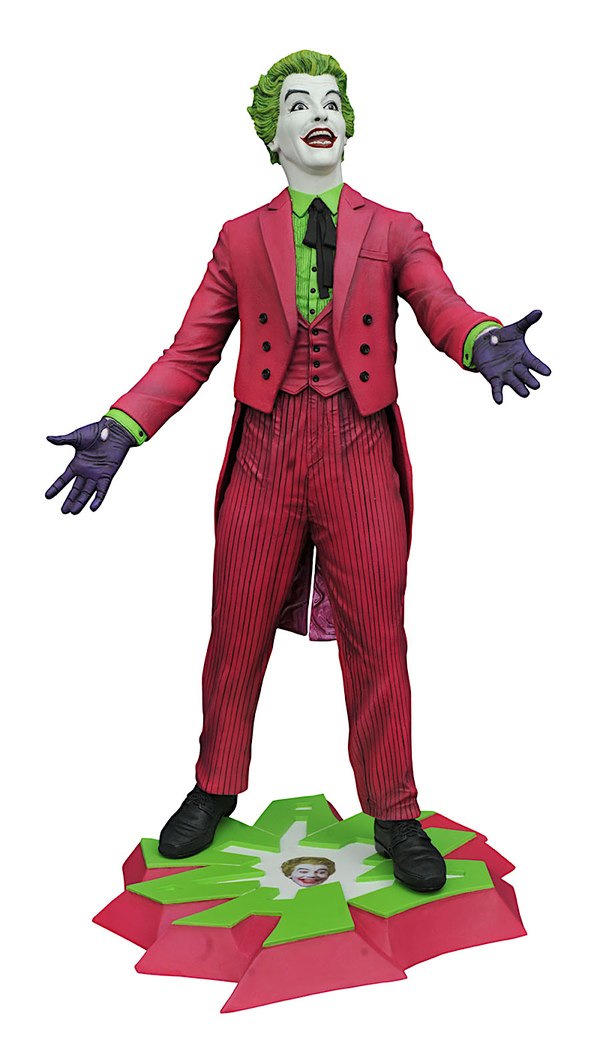 A Diamond Select Toys release! The Clown Prince of Crime is moving up to the big time! Hot on the heels of Batman, Batgirl and Catwoman, this 12-inch scale of The Joker depicts his classic TV appearance, and is in scale to all other Premier Collection statues! With an explosive base decorated with his own face, this detailed sculpt includes the actor’s ever-present mustache, and is a must-have for any Classic Batman collection! Limited to 3,000 pieces, it comes packaged in a full-color numbered box with a numbered certificate of authenticity. Sculpted by Jean St. Jean! (Item #SEP162531, SRP: $149.99) 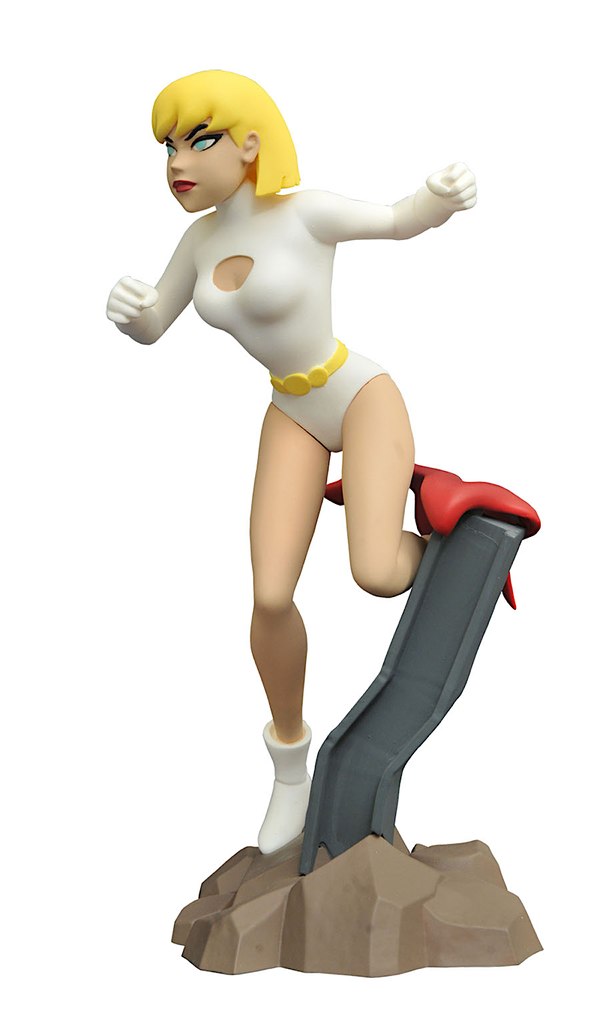 A Diamond Select Toys release! It’s the girl who would be Power Girl! Created by Cadmus Labs as a clone of Supergirl, Galatea was aged to her physical prime without the moral influences that guided her genetic twin, and became an enemy of the Justice League. Sculpted at a 9-inch scale, this dynamic PVC figure has Galatea hovering over a diorama base, and features detailed sculpting and paint applications. The figure comes packaged in a full-color window box, and is in scale to all Femme Fatales and Gallery PVC figures. Sculpted by Varner Studios! (Item #SEP162548, $45.00)

A Diamond Select Toys release! Criminals beware, the Huntress is here! The enemy of organized crime, the Huntress is part of Batman’s extended family of crime-fighters, and is also a member of the Justice League! Based on her appearance in that classic animated series, this 9” scale PVC figure rests on a diorama base, and is in scale to all Gallery and Femme Fatales PVC figures. Packaged in a full-color window box. Sculpted by Varner Studios. (Item #OCT162577, SRP: $45.00) 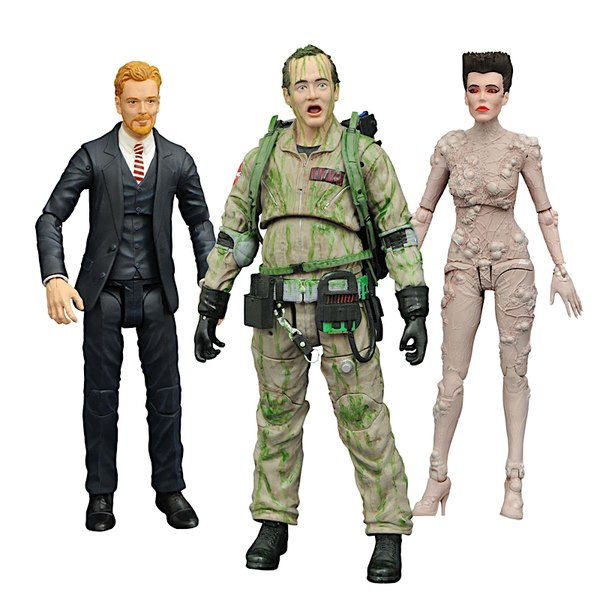 A Diamond Select Toys release! The Traveler has come! After three series of the Ghostbusters and their friends, now it’s time for a wave of their foes! This new assortment of fully poseable 7-inch scale action figures features Gozer the Gozerian, who was big in Sumeria, alongside EPA stiff Walter Peck and a slimed version of Peter Venkman featuring a new sculpt! Each figure features 16 points of articulation, and each figure comes with another piece of the rooftop diorama – collect all 15 figures to build the rooftop temple from the end of the film! Sculpted by Gentle Giant Studios! (Item # SEP162532, SRP: $24.99/ea.)

A Diamond Select Toys release! Gotham City is getting stranger, and so is the Gotham Minimates line! Based on the latest season of Gotham on Fox, this all-new box set of 2-inch Minimates mini-figures features Dr. Hugo Strange, Detective Harvey Bullock, Dr. Leslie Thompkins and the villainous Victor Fries (a.k.a. Mr. Freeze)! Each Minimate features up to 14 point of articulation, and fully interchangeable parts and accessories – Strange can change from his suit to his surgical gown, Fries includes his powerful freeze ray, and Bullock comes with coffee and donuts! Each figure also includes a clear display stand. Set comes packaged in a full-color blister card. (Item #SEP162528, SRP: $24.99) 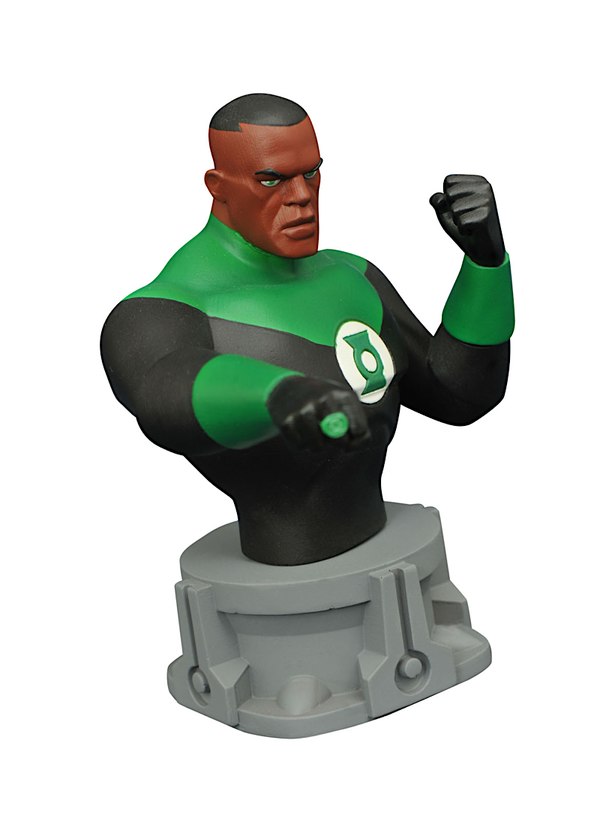 A Diamond Select Toys release! In brightest day, in blackest night, no evil shall escape his sight! This 6-inch resin bust of Green Lantern Jon Stewart joins the growing Justice League team in DST’s epic line of busts based on the DC Animated Universe! Limited to only 3,000 pieces, Jon Stewart is posed with his ring at the ready, atop a pedestal base inspired by the League’s Watchtower satellite. Bust comes packaged in a numbered box with a numbered certificate of authenticity. Sculpted by Varner Studios! (Item #SEP162547, SRP: $59.99) 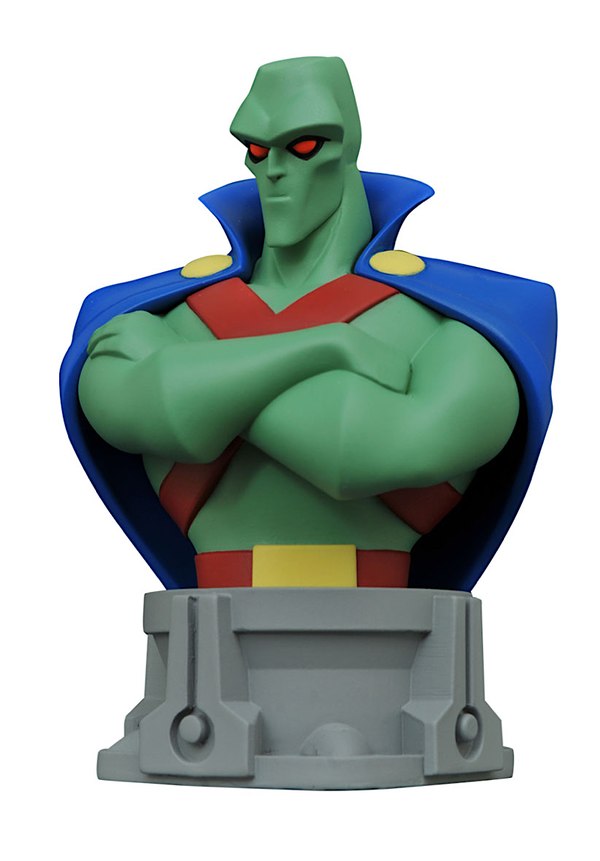 A Diamond Select Toys release! The last Martian joins the Justice League resin bust series! As DST expands their lineup of collectibles based on the classic Justice League and Justice League Unlimited cartoons, founding League member Martian Manhunter has landed, measuring approximately 6 inches tall atop a pedestal base inspired by the Watchtower satellite. Limited to only 3,000 pieces, he comes packaged in a full-color box with a certificate of authenticity. Sculpted by Varner Studios! (Item #OCT162576, SRP: $59.99) 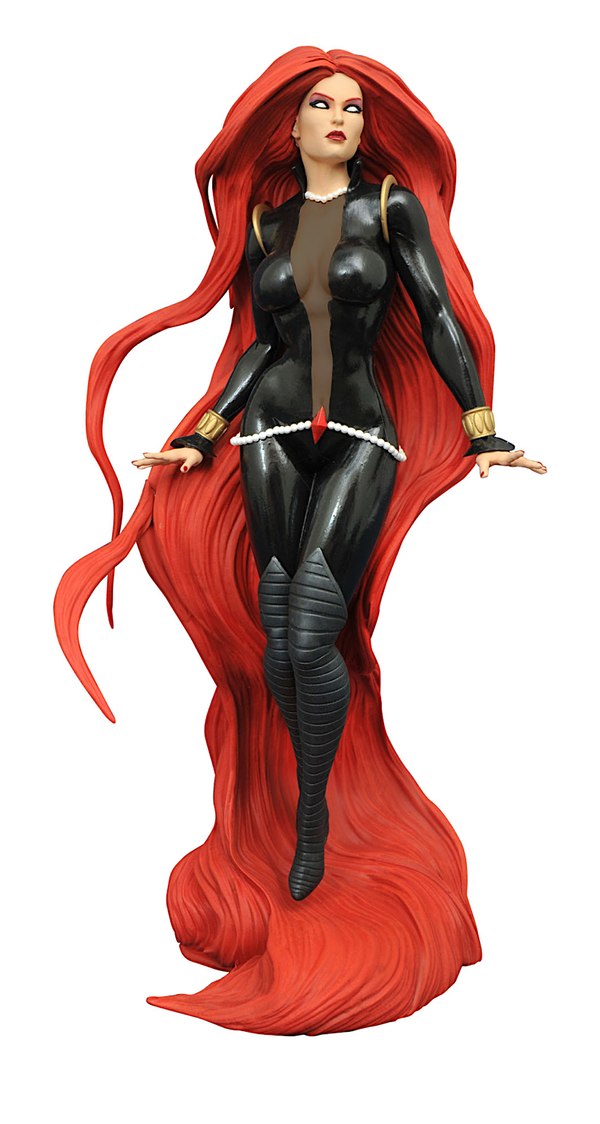 A Diamond Select Toys release! All hail the queen of the Inhumans! Once a member of the Frightful Four, now monarch of the Inhuman race, Medusa is the latest PVC diorama to join the Marvel Gallery line. Wearing one of her most recent costumes, she hovers above the ground, suspended by her own prehensile hair! This PVC figure is sculpted in 9-inch scale, making it in scale to all Gallery and Femme Fatales PVC figures. Packaged in a full-color window box. Sculpted by Alejandro Pereira! (Item #OCT162587, SRP: $45.00)

A Diamond Select Toys release! Marvel’s most popular super-hero is the newest addition to the Marvel Gallery PVC line! Sculpted in 9-inch scale, this sculpture of Spider-Man sees him balanced on one foot atop a New York City rooftop, surveying the city he is sworn to protect! Featuring detailed sculpting and paint applications this PVC diorama is in scale to all Gallery and Femme Fatales PVC figures, and comes packaged in a full-color window box. Sculpted by Mat Brouillard! (Item #SEP162538, SRP: $45.00)

A Diamond Select Toys release! The Devil of Hell’s Kitchen is back, with a new friend and two new frenemies! Based on Season 2 of the Daredevil TV series on Netflix, this box set of four Minimates mini-figures features Daredevil as he appeared in the infamous stairwell fight, plus Elektra, Stick and Karen Page! Each 2-inch Minimates mini-figure features 14 points of articulation, fully interchangeable parts, and a display stand. The set also includes a duct-taped gun hand and chain for Daredevil, a removable hat and alternate head for Stick, a laptop and Frank Castle’s X-Ray for Karen, and sais and an alternate head for Elektra. Packaged in a full-color window box. (Item #OCT162588, SRP: $24.99) 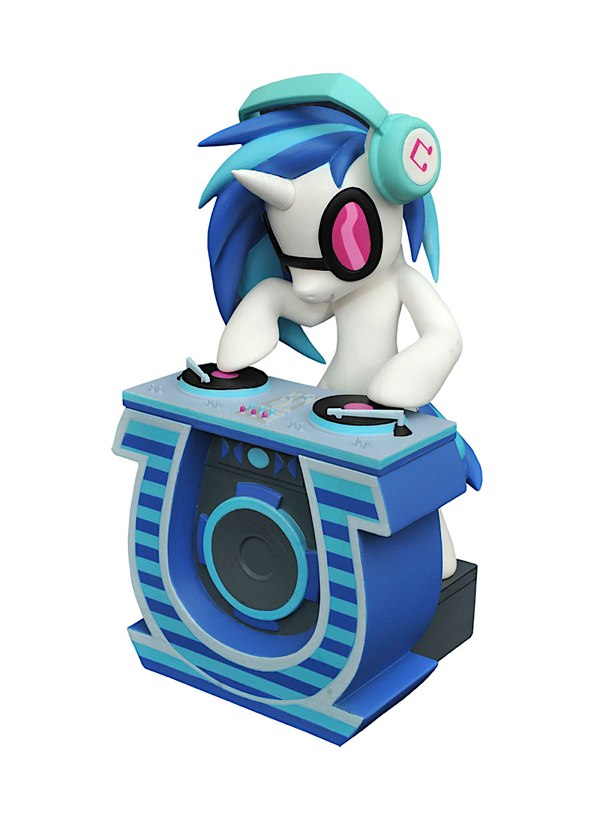 A Diamond Select Toys release! In Equestria, you clip, you clop and you don’t stop! The DST vinyl bank line based on My Little Pony: Friendship is Magic continues with DJ Pon-3, Equestria’s resident record-spinner! Depicted with her twin turntables and headphones, DJ Pon-3 stands approximately 8 inches tall and features detailed sculpting and paint applications. Plus, a coin slot on the back and access door in the base allow you to save up your money to buy some fresh beats! Bank comes packaged ina clear polybag. Sculpted by Varner Studios! (Item #SEP162529, SRP: $22.99) 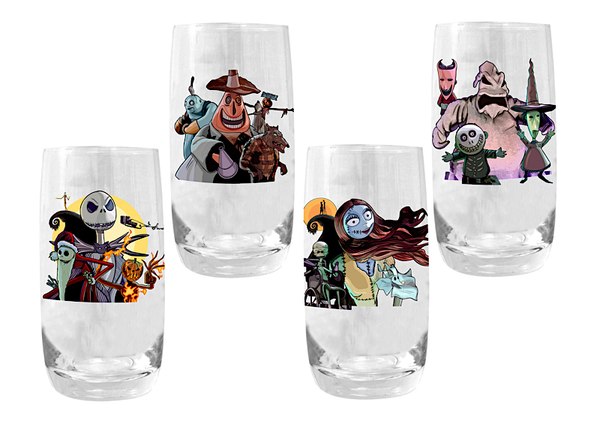 A Diamond Select Toys release! Raise a toast to the Pumpkin King with these four tumblers celebrating The Nightmare Before Christmas! Featuring all-new artwork inspired by the film, these fast-food-style glass tumblers also have mini-biographies of each character on the reverse side, and spotlight Jack, Sally, Oogie Boogie and the Mayor, along with some of Halloween Town’s other residents. Recommend hand-wash only. Each glass is individually packaged in a full-color window box.

A Diamond Select Toys release! The star of the stop-motion animation holiday classic Tim Burton’s The Nightmare Before Christmas is back, and Christmas will never be the same! With an all-new head sculpt, this unlimited, single-packed 16” doll of Jack Skellington in his Santa Claus outfit features a real cloth costume over a fully poseable body, with 12 points of articulation. Packaged in a coffin-shaped window box! (Item #SEP162539, SRP: $49.99)
Image 1 of 16