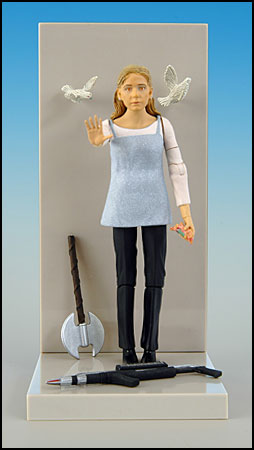 With the Spring 2006 release date fast approaching for Diamond Select Toys upcoming Buffy the Vampire Slayer action figure release, the details surrounding the exclusive "Primeval" Buffy action figure have been revealed! As part of an effort to bring the best figures possible to fans, the "Primeval" Buffy figure will be available exclusively from Diamond Select Toys' online and will go in June! While the figure will only be available to U.S. fans through the DST web site, a limited quantity will also be available in the Europe, the U.K. and Australia.

Due out in May of this year, the full release of seven action figures features the many incarnations of the Summers sisters - Buffy and Dawn! In addition to the core release of Chosen Buffy, Lessons Dawn and the limited Once More With Feeling Dawn, three exclusive figures were previously announced for release. "Primeval" Buffy marks the fourth and final exclusive figure and joins the ranks of Time and Space Toys' Buffybot, Action Figure Xpress' Cheerleader Buffy and Diamond Previews' Vampire Buffy. Each action figure also features the scanned likeness of Buffy stars Sarah Michelle Gellar or Michelle Trachtenberg!