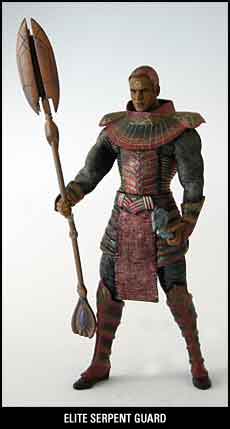 Stargate SG-1 action figures are scheduled to debut in June 2006. By purchasing four of DST’s Stargate SG-1 figures, customers will be able to redeem their UPCs for a free exclusive Elite Serpent Guard action figure featuring a repainted armor design as part of a promotional mailing program.

“We’re very pleased at the response our Stargate SG-1 figures have received and we’re glad to be able to offer fans another much-requested figure to add to their collections,” said Chuck Terceira, Director of Diamond Select Toys.

The first series of Stargate SG-1 action figures is scheduled for release this spring and will feature Colonel Jack O’Neill, General Jack O’Neill, Daniel Jackson and a Serpent Guard as well as a Diamond Previews exclusive Black Ops Jack figure. With a second series due out later this year, fans will be able to build their own figure-sized Stargate with the pieces included in these releases.

Stargate SG-1 is currently filming its tenth season and Stargate: Atlantis is entering its third season. Both Sci-Fi Channel series have received critical acclaim for their writing, acting, special effects and more. With over two million viewers per episode, the Stargate franchise is as strong as ever.