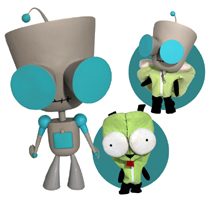 Elkridge, MD (April 28, 2005) – One of the most beloved characters from Nickelodeon’s cult hit Invader ZIM, is ZIM’s lovably simple robot sidekick, GIR. While the rest of the Irken invaders are given SIR units – robots whose function is to assist in invasions – Zim is given a GIR unit, made from spare parts and loose change. GIR, of course, proves to be less than useful to Zim’s “conquest” of Earth, where GIR “blends in” with his green doggy suit and spends most of his time watching television.

Palisades Toys celebrates all things GIR with the release of the ultimate GIR collectible – MEGA GIR!! MEGA GIR stands roughly 12 inches tall from his feet to the top of his antenna. And, as an added bonus, he comes complete with a removable plush doggie suit, so that you can display him in his Irken robot mode, or in his “doggie disguise” mode.

MEGA GIR will be released this fall, and will have an SRP of $29.99 each. For more information, please visit www.Palisadestoys.com.

Palisades Entertainment, LLC (“Palisades Toys”) designs, manufactures, and markets a variety of collectable toy products worldwide through sales to retailers and directly to consumers. Palisades Toys believes its products are among the most highly detailed and collectable action figures, PolyStone statues, PolyStone mini busts in the world. Formed in 1994, Palisades’ products are sold throughout the world at various retail outlets including Toys "R" Us, K•B Toys, Target, Electronics Boutique, Tower Records, Media Play, Sam Goody, Suncoast Video, Amazon.com and a variety of domestic and international comic shops and specialty retailer stores. Palisades Toys’ current product portfolio includes The Muppets, Sesame Street, Adult Swim, Alien, Predator, Transformers, G.I. Joe, Ren & Stimpy, Army of Darkness, The X-Files, and others. Further information on this and all other Palisades Toys products is available via our company website at: www.Palisadestoys.com.