Girl Power
by Jay Cochran
February 07, 2013
Malibu, CaliforniaТs most fashionable resident is moving. Today Barbie officially put her coastal Dreamhouse on the market and is packing up her three-story pink palace Ц signaling the launch of a year-long global brand campaign. With the help of her realtor-to-the-stars Josh Altman, the impressively scaled Barbie Dreamhouse is currently listed on the market for $25 million*. Over the next few months, Barbie will embark on a worldwide tour to find a new dream home.

Barbie has been a part of girlsТ dreams and imaginations for four generations, but for the first time, the brand is literally letting fans УintoФ her world by opening the doors to her palatial Dreamhouse. This yearТs global campaign will feature real-life, life-sized experiences, online engagement and retail touch points that bring the Barbie Dreamhouse to life in new ways.

УIt wasnТt an easy decision for Barbie to put her Dreamhouse on the market, but this move marks an unprecedented opportunity for her fans to get an inside look at her dreamy home,Ф said Lori Pantel, vice president, global marketing for Barbie. УAs the brand continues to evolve, we are focused on creating new experiences that allow girls to step into BarbieТs world in ways they never thought possible Ц igniting their imaginations and encouraging them to dream even bigger.Ф

For 41 years, Barbie dollТs famous Dreamhouse has been a fictional Malibu landmark as well as one of the most coveted toy homes. The original Barbie Dreamhouse debuted in 1962, providing girls with the backdrop to Уplay houseФ with Barbie which brought to life Ruth HandlerТs vision that Barbie allows girls to role play real life scenarios. Each model has represented the era the house was УbuiltФ in with unique architectural features and interior design details, including a three-story model in 2012. As a successful career woman and homeowner, the Barbie Dreamhouse is one of her most valuable assets.

After decades of living in Malibu, Barbie is ready for a change Ц sheТs moving. To sell her house and make the move, Barbieо has enlisted the premier real estate agent to celebrities, Josh Altman. Valued at $25 million*, her creatively scaled 8,500 square foot, three-story, one-bedroom, one-bathroom mansion is the only house in Malibu with truly unobstructed views of the ocean Ц after all, it only has three walls! The Dreamhouseо also includes the iconic pink elevator equipped with a state-of-the-art pulley system.

УCelebrity can add to the cache of a listing, but few homes also have such iconic status as BarbieТs Malibu Dreamhouse,Ф said Altman. УIТve been uniting people with their very own dream homes for years and Malibu is considered one of the most desirable addresses in the world, making this one-of-a-kind property a realtorТs dream listing.Ф

In search of a new place to call home, Barbieо will embark on a worldwide scouting tour where she will enlist the help of a УDream TeamФ of designers to provide her with advice and inspiration to make a decision on her new home.

Over the years, Barbie has served as creative muse and inspiration to hundreds of designers and stylists developing relationships with the best of the best. This year, Barbieо is partnering with a group of admired style setters, designers and industry experts to re-imagine the Barbie Dreamhouse for today. The Barbieо Dream Team of interior designers include Los Angeles-based textile designer and design influencer Lulu Dekwiatkowski, New York/Palm Beach based designer Celerie Kemble and West Coast fashion and home product designer Trina Turk.

Barbie will open the doors to her Dreamhouse with the first-ever, larger than life УBarbie The Dreamhouse ExperienceФ which will debut on two continents Ц Florida in the United States and Berlin, Germany in March. Inspired by the popular web series, Barbie Life in the Dreamhouse, this interactive installation celebrates Barbieо dollТs fabulous life, allowing fans a look inside her pink palace. Fans can visit www.barbiedreamhouse.com for ticket pricing and more information.

Girls can get an all-access digital pass into the Dreamhouse with the third season of the CGI-animated reality web series, УBarbieЩ Life in the Dreamhouse.Ф The lighthearted, humorous show airs on Barbie.com/Dreamhouse, and stars Barbie and her friends, her sisters, adorable pets and long-time boyfriend, Kenо. With more than 300 million views, translated into 21 different languages, mobile- and tablet-optimization and global distribution, girls can visit the Dreamhouseо anytime and anywhere. On Barbie.com, the top online destination for girls reaching 13 million unique visitors around the world monthly, girls can make their dreams a reality by customizing their own Dreamhouseо.

Girls can now also cruise the world in style with fun, fashion and runway moments onboard Royal Caribbean International with the УBarbieЩ Premium Experience.Ф Available fleetwide this March, the onboard Barbieо package lets girls sleep in Barbie-themed staterooms, attend a Barbie tea party and design Barbie outfits while on the high seas.

This fall, girls will have the ultimate play experience with a newly-designed Dreamhouseо. Complete with two pink elevators, the 2013 Barbieо Dreamhouseо is sure to be the must-have gift for the holidays.

Visit Barbie on Facebook (Facebook.com/Barbie) for the latest on her moving adventures.

*For entertainment purposes only
Image 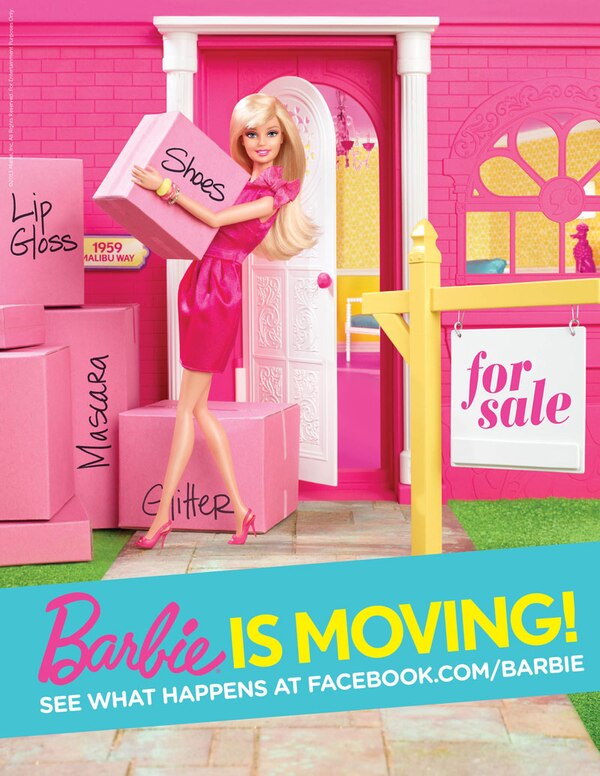